The market-moving news-o-the-day: PMI Composite FLASH report: headline 50.9, manufacturing 49.9, and services 50.9, with < 50 signaling contraction. Each element of the report was below the low end of the expected range. Takeaway: manufacturing is now in a slight recession, and even services are just barely above stall speed. Compared to the rest of the world, that’s fantastic, but it does suggest a US recession may be just around the corner.

Gold moved lower again today in a relatively narrow range; the short black candle was a bearish continuation, and forecaster inched lower and remains in a downtrend. Gold remains in an uptrend in both weekly and monthly timeframes. Gold has a rough support level at round number 1500; a break through 1500 might lead to a fair amount of selling. 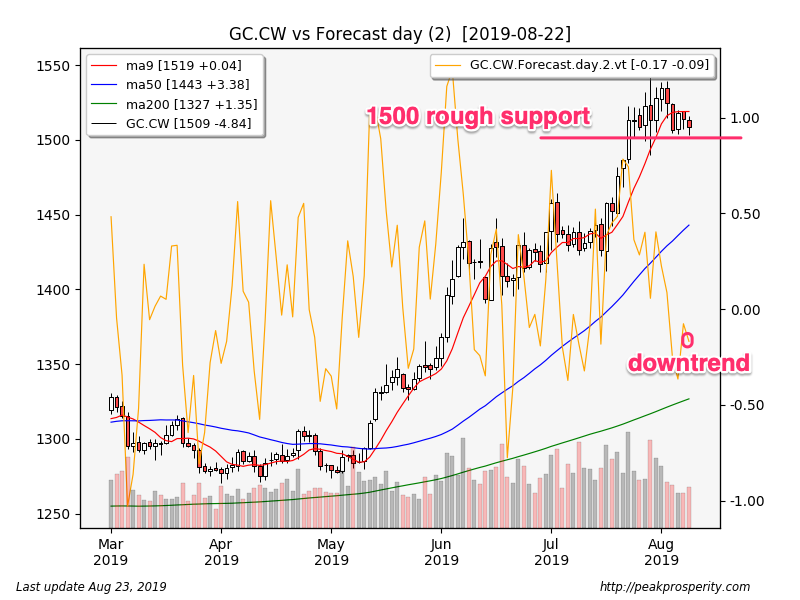 Silver also fell in a narrow trading range; the short black/spinning top was mildly bearish, and forecaster moved lower but remains (just barely) in an uptrend. Silver remains in an uptrend in all 3 timeframes. 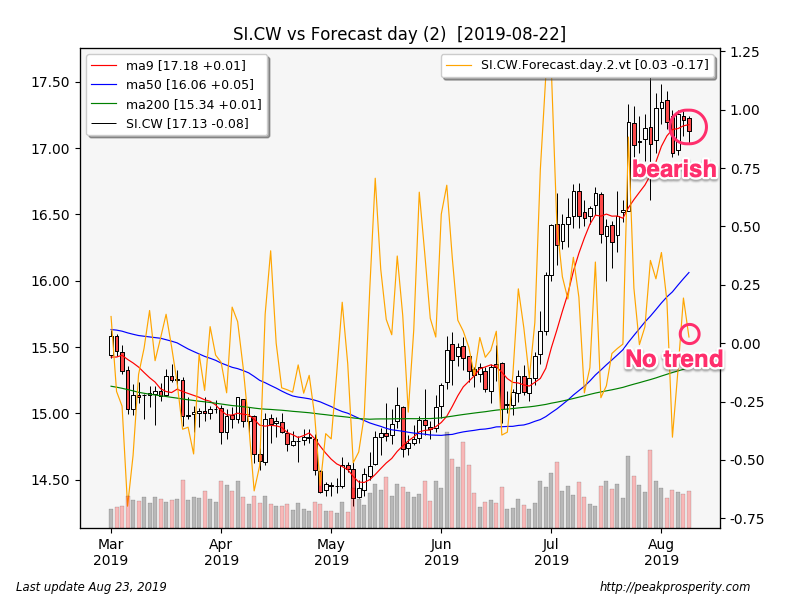 The miners rallied early, but then sold off for the rest of the day. GDX fell -0.73% on moderately light volume, and GDXJ dropped -1.41% on moderately light volume also. XAU moved down -0.56%, the spinning top/NR7 candle was somewhat bearish, and forecaster dropped fairly hard but remains in a slight uptrend. Today’s move was enough to pull XAU weekly into a downtrend, leaving XAU in an uptrend in the daily and monthly timeframes. 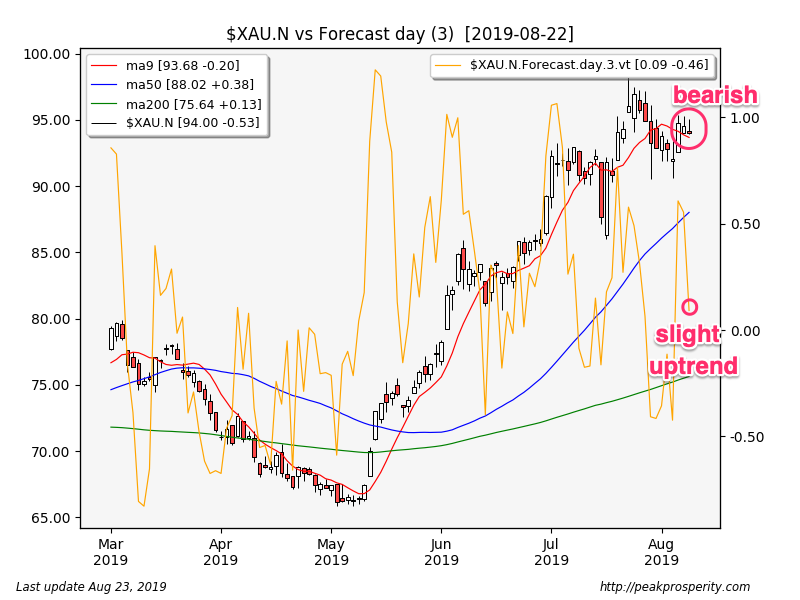 Platinum rose +0.57%, palladium climbed +1.09%, while copper fell -0.79%. Copper has resumed its downtrend, and appears to be heading for a re-test of the recent lows. Since I believe copper is a China proxy, this suggests to me that the belief in some sort of trade deal being made is fading.

The buck fell -0.13 [-0.13%] to 97.74. The spinning top candle was mildly bearish, and forecaster moved lower but not quite enough for a downtrend. The buck remains in an uptrend in the daily and weekly timeframes, but the trends look very weak. In spite of the buck remaining near the yearly highs, monthly is still pointing lower.

Large currency moves include: GBP [+1.06%]. CNY continues to move higher – in trading in Asia, it is now at 7.09. I use both the currency pair (CNY/USD) and copper to measure sentiment on the US/China relationship as well as the expectations for the Chinese economy over the medium term. According to these measures, sentiment is slowly getting worse.

Nick Cunningham at oilprice.com tells us that we should feel fortunate that prices are as high as they are: Iran sanctions (-2 mbpd), Venezuela troubles (-1 mbpd) and OPEC supply cuts (-1.2 mbpd) have chopped a huge 4.2 mbpd off the supply end of the equation. Without these “supply outages”, oil prices – who knows – might be in the 20s once again. [That’s me, not Nick, making that price estimate].

SPX fell -1.48 [-0.05%] to 2922.95. SPX dropped fairly hard following the PMI composite flash released at 9:45 am, but regained most of its losses by end of day. The spinning top candle was a bullish continuation, and forecaster moved lower but remains in an uptrend. SPX remains in an uptrend in all 3 timeframes.

TLT plunged -0.66%, the spinning top candle was neutral, and forecaster moved lower but remains in an uptrend. TY also fell, losing -0.16%; the spinning top candle was mildly bearish, and forecaster inched lower, remaining in a modest downtrend. This took TY below the 9 MA for the first time in two months. TY remains in an uptrend in the weekly and monthly timeframes. The 10-year yield rose +3.3 to 1.61%.

JNK rose +0.19%, the spinning top was a bullish continuation and forecaster moved higher into its uptrend. JNK continues to signal risk on. BAA.AAA differential fell -1 bp to +95 bp.

It was another fairly uneventful day – minus the SPX sell-off after that PMI Composite FLASH release at 9:45 that was quickly reversed.  The metals continued moving slowly lower; gold has fallen down to (roughly) the 1500 level.  There’s a chance of a break below 1500 which could lead to some brisk selling by newcomers who bought the highs.  And yet – the mining shares remain reasonably well-bid, and the longer-term charts still look quite strong: gold’s monthly forecaster looks stronger than it was in 2016 as does silver, even though silver’s current price (17.02) is far below the 2016 high of $21.23.

So how can junky debt continue moving higher in the face of an ever-more-likely recession?  Well, capitalism is dead – that’s my assessment.  Instead of poorly performing companies risking failure, our friendly central banks are going to step up to buy their crappy debt and prevent the “free market” from taking them out and making room for their smarter and more productive competitors.  And Fed officials why productivity growth is practically nonexistent.  That’s because poor management and bad ideas continue to be rewarded and supported by our central planners.  30 years after the Soviet Union fell, we have now become them.  The EU even selected their governmental structure in order to prevent any chance of “democracy” from interfering with The Project.  I can imagine Nikita Khrushchev laughing at us all from beyond the grave.

But I digress.  Tomorrow: New Home Sales, which will tell us how fantastically the housing market is doing with mortgage rates at 3.5%.  The next ECB meeting, where I expect the real fireworks to happen, is just 3 short weeks away.

Well that dollar cost averaging thing worked out pretty well.  Who knew gold would pop $20 and silver 30 cents on today’s events – certainly not me.  I was waiting for an ECB meeting 3 weeks from now.

“Its a news-driven market.”  And a bull market.

Moral of the story: don’t try and be too cute.