The big news of the day: FOMC released its minutes from the last meeting. There was no mention of future rate cuts. Econoday summarized it this way:

July’s cut has come and gone and though there were no promises for more, there are certainly expectations in the financial markets for more. The Fed is the week’s theme to be amplified on Thursday and Friday with the Jackson Hole meeting and a speech Friday by Jerome Powell.

Gold moved lower in a fairly narrow range today; the short black candle was mildly bullish, and forecaster moved higher but not quite enough to move gold into an uptrend. Gold remains in an uptrend in both weekly and monthly timeframes. 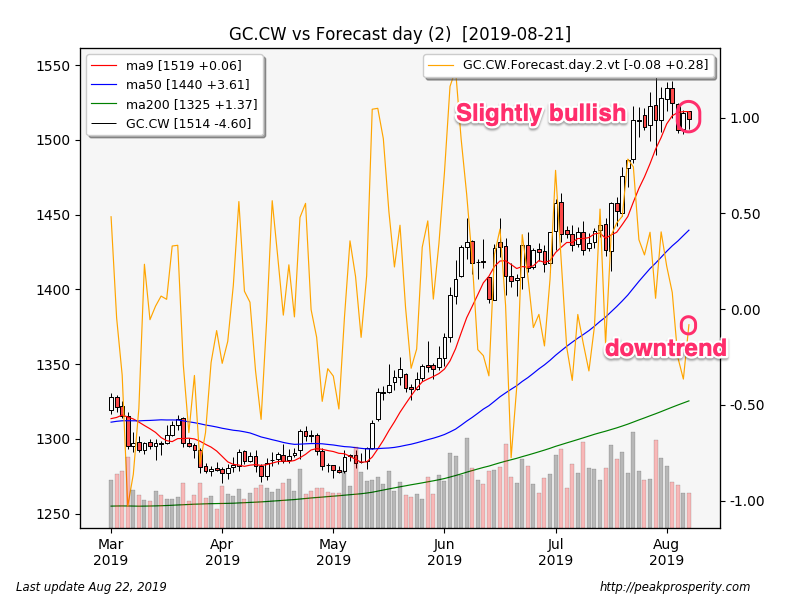 Silver also moved slightly lower in a narrow range; the short black/NR7 was mildly bearish, but forecaster moved higher, pulling silver into an uptrend. Silver is now in an uptrend in all 3 timeframes. 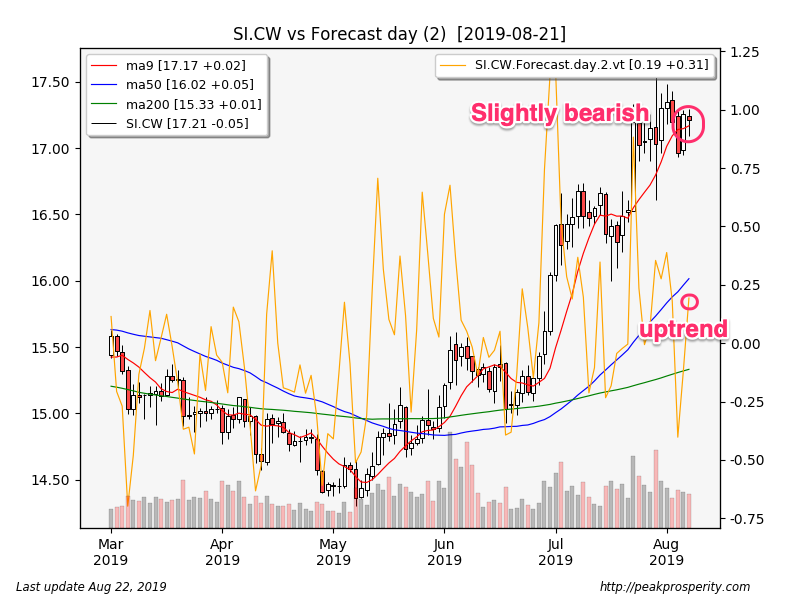 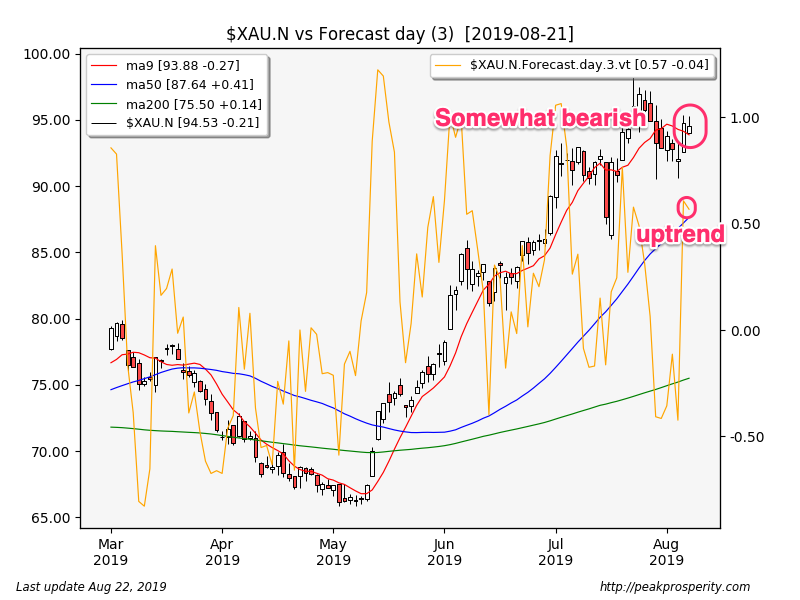 The buck rose +0.10 [+0.10%] to 97.87. The short white candle was a bullish continuation, and forecaster moved slightly higher and remains in an uptrend. However, the weekly moved into a slight downtrend, which leaves the buck in a downtrend in both weekly and monthly timeframes. Again, I’m really not sure why the models are bearish on the buck; to me it looks pretty strong.

There were no large currency moves today. CNY continues to inch higher; after market close, CNY is now up to 7.08.

Crude fell -0.21 [-0.38%] to 55.68. Crude tried to rally today but the rally failed; the high wave candle was mildly bearish (28%) and forecaster fell but remains in an uptrend. Crude remains in an uptrend in all 3 timeframes. That said – the crude uptrends are all pretty weak right now.

SPX rose +23.92 [+0.82%] to 2924.43. All of gains came in the futures markets overnight. The doji candle was a bullish continuation, and forecaster moved higher into its uptrend. SPX remains in an uptrend in all 3 timeframes.

TLT fell -0.67%, the high wave candle was a bullish continuation, and forecaster jumped higher moving TLT back into an uptrend. TY fell -0.30%, the bearish harami was somewhat bearish (33%), and forecaster moved lower and is now in a slight downtrend. TY remains above its 9 MA, but is now in an uptrend in just weekly and monthly timeframes. The 10-year yield rose +1.6 to 1.58%.

JNK shot up +0.44% , the long white candle was a bullish continuation, and forecaster jumped higher into what is now a strong uptrend. The rally in JNK is affirming the risk on mood in equities. BAA.AAA differential rose +2 bp to +96 bp. The differential has now moved back into a (weekly) uptrend. Money seems to be preferring AAA over BAA debt, at least over the past week or so.

Not much happened in the metals space today; the news out of the FOMC minutes was nominally bearish for the metals (no hints of more rate cuts), but the release of the minutes didn’t seem to move prices much at all.  They didn’t actually seem to move rate cut expectations very much either; in spite of what the Fed says, the market seems to believe that they’re going to continue cutting,  The risk of course is if the September meeting rolls around (27 days from now), and they disappoint.  If they plan not to cut, I expect them to inform the market in advance, and this could lead to a move lower in the metals.  Come to think of it, probably not just the metals.  No more rate cuts will allow Trump to blame any upcoming recession entirely on the Fed.  Trump wants what Obama had for 8 long years: 0% rates, and $4 trillion in money printing.  If you’re President, what’s not to like about easy money?

The PMI composite FLASH release tomorrow will provide us an update on the state of things in the US.

In a recent video, Mike Maloney said that he is currenly very overweight silver versus gold. I am currenly overweight gold versus silver and am reassessing this.

As I see it, silver is riskier than gold, in that it is more volatile and it has more of an industrial demand component than gold (which could hurt it during a recession). However, it is also better value (as per the gold-silver ratio) and is much further from it’s all time highs (therefore more upside potential) and closer to it’s lows (therefore less downside potential).

Obviously one’s weighing of gold vs silver is dependent on how risky or speculative one wants to be, but at the moment, silver seems to be an asymettric bet i.e. larger upside potential than downside.

Are there any other pertinent aspects that I’m missing here?

Thanks as always, E. 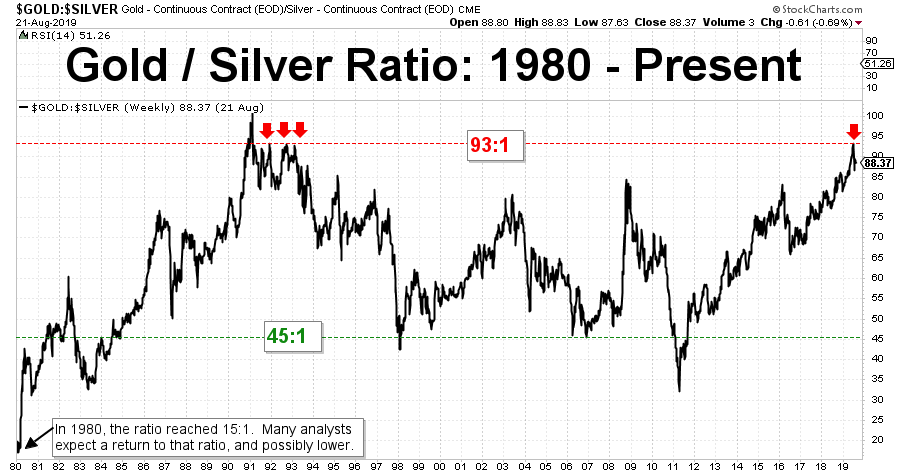 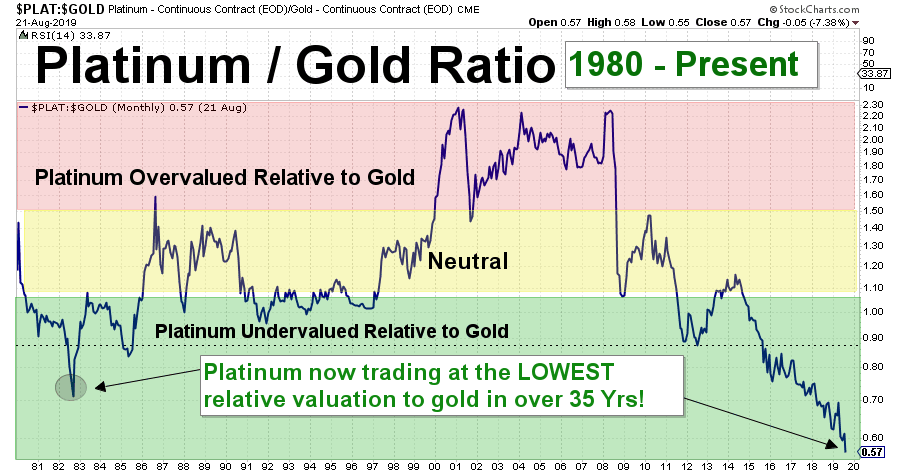 Yes exactly.   You want to be overweight gold at the GSR highs?  Maybe not!!

Straw hats in the wintertime.

I believe silver is most definitely asymmetric.  I don’t see a deflationary crash.  I think the central banks will step in before that even becomes a possibility.  I mean – I used to think we’d get deflation, but recent events have shown that our friendly central bankers are on a hair trigger right now.

Just wait until the ECB meeting on September 12th.  I’m really dying to see what they come up with.  Will all that mad front-running of junky debt pay off for all those traders?  I bet: yes, probably.  And in the near term too.  Probably.

Manufacturing in slight recession, and services just above stall speed.  All numbers below consensus.

I found myself agreeing with your assessment that the central banks and govs will not allow a deflationary crash this time, because they are much more ready and willing to intervene with easing, QE and fiscal stimulus, but then I recalled Stan Druckenmiller in a recent interview saying that the actions of the central banks over the past few years is the very thing that is most likely to cause another deflationary crash i.e. their inflation of new asset bubbles, which could burst again in another deflationary bust. This suggests to me that he believes the CBs won’t be able to prevent a bust. Any thoughts?

I can’t really speak for the long term.  I’m just looking short term at this point.

Short term, those central banks sure seem as though they’re on a hair trigger – especially the ECB.  I say this because of the very odd performance of junky debt.  If we really are moving towards a worldwide slowdown and/or deflation, junky debt should be the coal mine canary warning us of trouble ahead.  It would be the very first thing to deflate.  All these ridiculous companies…very sensitive to recessions and people willing to fund their crazy ventures.  And yet – the market seems mostly happy to buy their crappy debt.

What I’m saying is, the market doesn’t seem to be expecting a deflationary crash.  You don’t get deflation if the central bank buys up all the debt that might default.  In fact, iffy companies in Europe issue their crappy debt right to the central bank for very low interest rates.  (at least they did; are they still doing so?  I don’t know).  How can deflation occur in a situation like that?

No corporate failure = no debt default = no deflation.

Perhaps this might stop if/when a company ends up dying even after the ECB buys a whole bunch of its debt, causing the market to question the strength of the ECB’s balance sheet.  (The EU nations all get to contribute to fix up any holes in said balance sheet).  When might that happen?  Who knows when a company like that finally blows up?  The fall of Carillion was a big surprise.  Something like that, but bigger.  Maybe more than one of them.

If something like that happened, and it snapped confidence, would probably blow up the Eurozone.  Money would flee (cratering the Euro) and the backstop for Eurozone sovereign debt would have to end, and all those PIGS would be exposed to real market forces overnight. Why would the backstop end?  An announcement of “more money printing” would be viewed by the market as a negative – increasing the ECB’s exposure to crappy debt.

This isn’t the only trigger to removing the printing press.  Another might be a decision by big money to flee if ECB starts dropping rates severely below zero – where actual savers get penalized.  We’ll have to see what the ECB does at its next meeting, and how the market reacts.  To me its a very important meeting.

The current dynamic is, “market rallies on the prospect of money printing.”  Once confidence in the underlying system snaps, market will panic-sell on news of more money printing, throwing the central bankers into total confusion.

That will be the decision point.  Then they will have a choice between some sort of inflationary currency reset (like FDR did in 1933 – devaluing the currency once, say by 50% reducing debt burden as a % to GDP by 50% at a stroke), Chris’s “QE for the people”, or a deflationary bust.  They could of course always do a Jubilee but as much as I support Keen’s idea, I suspect picking the common man as the winner probably won’t happen with our current Epstein-coddling system in place.

So – deflation?  I’m not seeing it anymore except as a one-in-3 choice which would only be selected by accident and/or default. This is a lot different from my previous viewpoint.  Certainly the logical endpoint of overindebtedness and an asset bubble is deflation, but that assumes we have a free market.

Which we haven’t had for at least 10 years now.  And with scant prospects of one cropping up anytime soon.

Dave, thanks for the detailed and thoughful response. Plenty of food for thought there. Cheers!