Gold recovered most of yesterday’s losses; the short white candle was a bearish continuation, and forecaster moved lower and moved deeper into a downtrend. Gold remains in an uptrend in both weekly and monthly timeframes. Volume is dropping on the decline – this is a reasonably good sign, as it suggests that the selling pressure is not all that intense.

Gold/Euros also moved into a downtrend today, although it ended the day back above its 9 MA.. 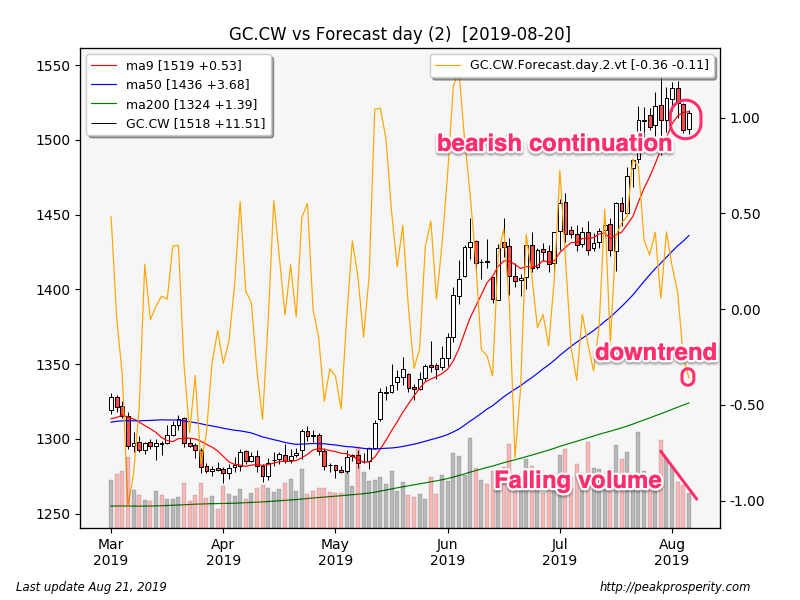 Silver rallied a lot more strongly than gold, wiping out all of yesterday’s losses plus a little more. The closing white marubozu was unrated, and forecaster moved higher but remains in a downtrend. SI ended the day back above its 9 MA. Silver remains in an uptrend in both weekly and monthly timeframes.

COMEX SI open interest jumped +8,223 contracts. That is 17 days of global production in new paper, a massive increase in open interest. If not for all the new contracts, silver would have done even better, I suspect. 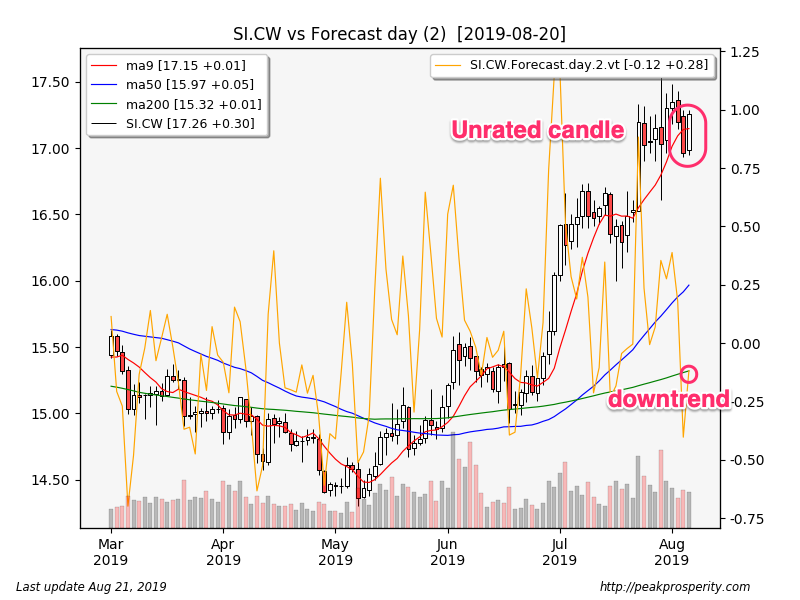 The miners gapped up at the open, and rallied for most of the day. GDX climbed +3.29% on heavy volume, while GDXJ rose +3.81% on moderately heavy volume. XAU moved up +2.93%, the swing low pattern was bullish (66%), and forecaster jumped back into an uptrend. XAU is now back above its 9 MA. Today’s rally was enough to pull the weekly back into an uptrend – just barely. XAU is back in an uptrend in all 3 timeframes. 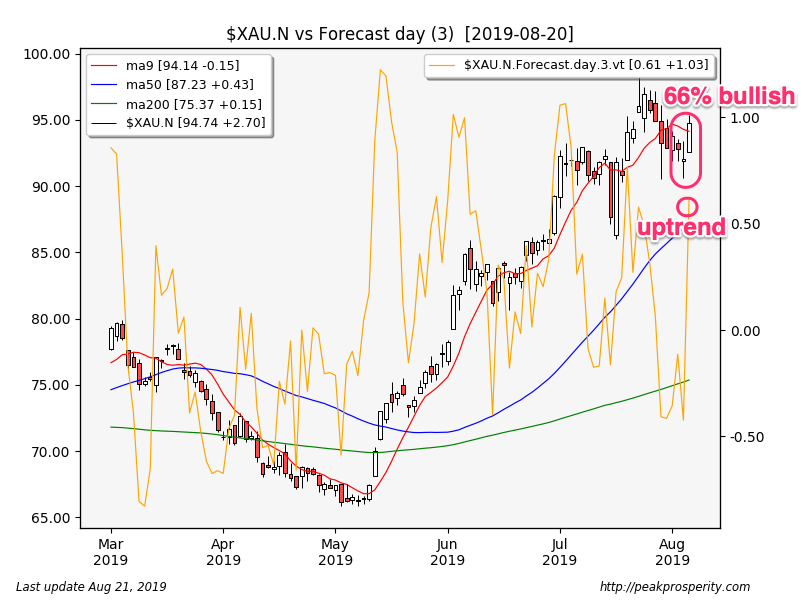 Platinum fell -0.32%, palladium moved up +0.81%, while copper dropped -0.90%. The rally in silver happened all on its own – it got no (meaningful) support from the other metals. I take this as a very positive sign for silver.

The buck fell -015 [-0.15%] to 97.77. The buck made a new high just after the US session opened, but then fell for the rest of the day. The long black candle was a bullish continuation, and forecaster fell but remained in a slight uptrend. Today’s drop was enough to pull the weekly into a downtrend. This means the buck ended the day in a downtrend in both weekly and monthly timeframes. I’m not sure why the forecaster is so bearish, with the buck quite near the highs. Perhaps it doesn’t like the interest rate moves – the falling 1-year rate, and the falling 10-year rate. I should take a look at the model, because to me, the chart seems pretty strong.

There were no large currency moves today; CNY is slowly creeping back up; it ended the day at 7.06.  To me this suggests there is “some doubt” about the positive impact of the tariff delay.  Uncertainty about the re-imposition of tariffs and the trade situation overall will, I suspect, slowly encourage US globalized businesses to pick up stakes and move off to, say, Vietnam.  Or Thailand.  Or India.  And one or two may even move back to the US.  The potential for 6 years of Trump and his tariffs is a lot of uncertainty.

Crude moved up +0.05 [+0.09%] to 55.89. Crude sold off fairly hard early in the US session, but managed to rally back to mostly-even within a few hours. The doji candle was mildly bearish (33%), but forecaster moved slightly higher, remaining in a strong uptrend. Crude remains in an uptrend in all 3 timeframes.

TLT jumped +1.03%, but the candle pattern was a bearish continuation, and forecaster inched higher but remains in a downtrend. TY rallied +0.41%, the long white candle was a bullish continuation, and forecaster moved higher and remains in a mild uptrend. TY remains above its 9 MA, and in an uptrend in all 3 timeframes. The 10-year yield fell -3.7 to 1.56%.  While the volatile 30-year (i.e. TLT) bounces around, the 10-year remains in a reasonably strong uptrend.

JNK rose +0.05%, the northern doji was a bullish continuation, and forecaster was unchanged, and remains in an uptrend. JNK is not hinting at any sort of correction in risk assets. BAA.AAA differential rose +4 bp to +94 bp. Perhaps there is starting to be a bit more concern about credit quality; the move in the differential was driven by some brisk selling in BAA credit yesterday.

The current move lower in the metals may have run out of steam.  XAU reversed today (and the candle pattern was quite strong), and silver outperformed gold – it all looked pretty reasonable.  Bonds too moved higher, especially the 10-year.

Armstrong calls these short corrections “reaction” moves; they are counter-trend, and last from 1-3 days.

I’m not really sure what happens with SPX.  Ok, when in doubt, pull back a level or two:

The currently-forming monthly candle pattern for SPX looks really horrid; candle code says its all sorts of bearish – 92% – about as bearish as things get.  So that suggests: no new highs for a while at least.   The “margin loan” data also suggests we move lower.  While prices have made new highs, margin debt has not.

FOMC minutes come out tomorrow at 2 pm. What will they say about more rate cuts?  That will probably drive prices in the short term.  On Thursday we have an early look at the PMI (the PMI composite FLASH) which might tell us if the current trends remain in place.

I want to buy some more silver, but both silver and particularly gold, look very overextended relative to the 200 day MA. Surely a pullback is a high probability? Any insights appreciated.

My two cents: we are in a bull market.  Getting in can be tough, especially if things get a lot worse in a hurry.  The ECB could sign up to take rates negative, buy every bond in sight, and this might send the Euro down hard.  This could happen at their very next meeting.

My two cents: use dollar cost averaging.  Don’t try to time it perfectly.  Don’t rely on there being some sort of major retracement.  The market could get away from you, and then you’d be really annoyed, yes?

Again.  We’re in a bull market now.  If it continues – and I believe that it will – it might just leave a lot of people behind who are “waiting for a pullback to the 200 MA” or whatever.

Dollar cost averaging.  Just buy some every week.  Pick a day, and a time.

Here’s more detail on why the CEO of Cathay Pacific was fired.  The story itself is almost unbelievable in this day and age where money is all that seems to matter to the gang at the top.

According to local Hong Kong media reports, Beijing authorities asked Hogg to hand over a list of Cathay Pacific employees who had taken part in the recent anti-extradition bill protests in Hong Kong. Instead of betraying his employees and endangering their safety, he only provided a list of one name — his own.

When I read this, my jaw literally dropped.  He must have known how this would play out.  He literally threw his job into the fire for his team.

Thanks for the smart idea. I started today… I find that it’s easier said than done though! It takes a bit of discipline. I’ll stick with it.

I agree its quite difficult to do.

If we mentally imagine that silver is going to be $50/oz at some point in the future (which I do not think is all that outlandish in this next bull market phase) then buying it at $17 (vs $16) doesn’t matter quite so much.

Gold has gone up quite a bit more – which is why I am focused a bit more on silver.  I just think its a better buy.  Even now, the gold/silver ratio is in the high 80s.  During the last major PM rally, the ratio got down to the low 30s.  That’s maybe a 250% move just on the ratio move alone.