Gold rose slowly but steadily throughout the day, it was a narrow trading range; the short white candle was a bullish continuation, and forecaster jumped +0.42 to +0.32, which was a buy signal for gold. Gold is moving slowly back towards round number 1200; it has not yet managed to rise above the 9 MA, but it is not far away – currently at 1202. Gold remains in a downtrend in both the weekly and monthly timeframes.

COMEX GC open interest rose 7,203 contracts. Looks like managed money is adding to their short positions as prices rise. No short covering from them yet. 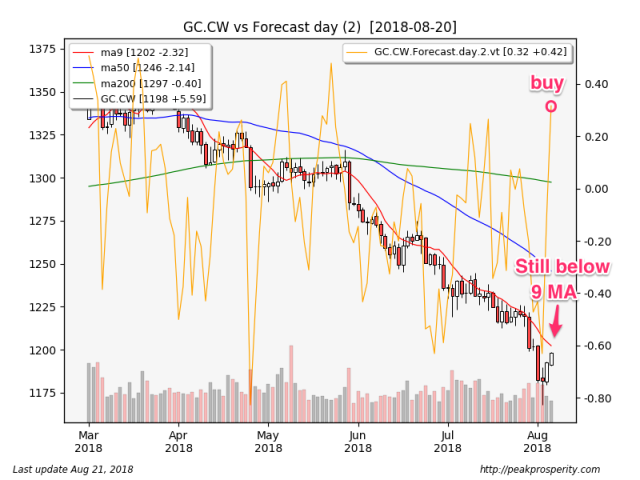 Silver mostly did its own thing today; it started falling after Asia closed, and wasn’t really ever able to recover by the close in New York. I’m not sure what the problem with silver was; pretty much everything else did better than silver today. The doji candle was slightly bearish, but forecaster jumped +0.25 to +0.28, which suggests the uptrend remains in place. Silver remains in a downtrend in both the weekly and monthly timeframes. 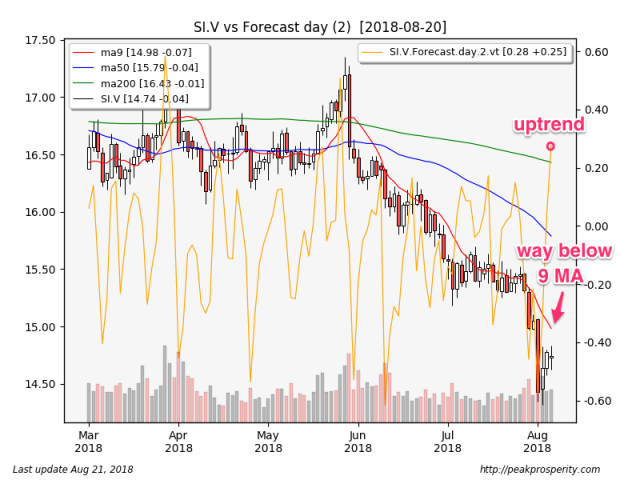 Miners mostly chopped sideways today, with GDX up +0.37% on heavy volume, while GDXJ moved up +1.16% on extremely heavy volume. What’s all that volume about? I have no idea. I’m not sure its a great sign, given the relatively small move higher in the ETF. XAU moved up +0.29%, and the spinning top candle was neutral. XAU remains in a downtrend, although the forecaster did jump +0.54 to -0.49. XAU remains in a downtrend in all 3 timeframes. 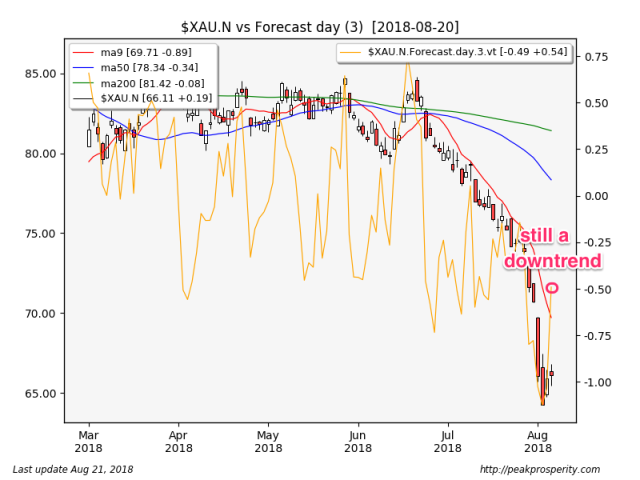 Platinum moved up +0.96%, palladium climbed +1.06%, while copper was up +0.21%. The other metals continued rebounding. Copper issued a buy signal today, as did palladium. Platinum is also in an uptrend too. It looks as though the other metals are on the road to recovery, with copper looking the softest of the bunch.

The buck fell -0.22 [-0.23%] to 95.50, dropping below the 9 MA for the first time in 3 weeks.  The euro was relatively strong today, up +0.38%.  The CNY has retreated more than 1% from the highs set last Wednesday.  I suspect that’s due to the restart of negotiations with the US on trade.  Buck remains in an uptrend in weekly and monthly timeframes.  A drop below the 50 would be a significant event; it has not been below the 50 since March. 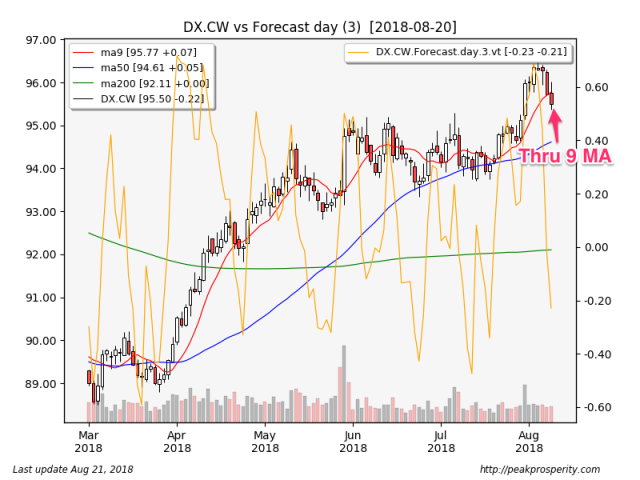 Crude rose +0.15 [+0.23%] to 65.19, moving slowly higher in fits and starts. Crude had an inside day; the spinning top/NR7 candle was not rated. Forecaster jumped +0.50 to +0.24, which is a buy signal for crude. Crude remains below its 9 MA though; this could be just another lame dead cat bounce in crude’s 7-week correction. Crude remains in a downtrend in both weekly and monthly timeframes.

SPX rose +6.92 [+0.24%] to 2857.05. The all time high is just 15 points away. The trading range today was narrow; the short white candle was a bullish continuation. Forecaster rose +0.17 to +0.69. SPX is in an uptrend in all timeframes. My guess is, we make new highs in the near future. Sector map has cyclicals (XLY:+0.71%) while utilities trailed (XLU:-0.35%). Financials and tech didn’t do so well, so the map looked a bit bearish to me, but given the narrow trading range, today’s moves probably don’t mean much.

TLT climbed +0.67%, looking strong all day long, making a new high. TY agreed, climbing +0.28% and also making a new high. The bond uptrend is strengthening. Why did bonds do so well today given the fall in the buck? I’m not really sure. TY is in an uptrend in all 3 timeframes. The 10-year yield fell -5.0 bp to 2.82%. We are far away from that 3% line-o-death, aren’t we? I’m guessing all the bond shorts are not happy campers.

JNK rose +0.08%; it is more or less chopping sideways in a range right now, but in a longer-term downtrend.

While the metals appear to be recovering, with palladium leading the way, silver and copper are lagging a bit, with silver trailing most.  While copper, palladium, and platinum are seeing short covering and/or reductions in open interest, both gold and silver continue to see increases.  As long as that continues, price will not rise very rapidly.

Miners continue to do poorly.  They still have quite a ways to go before they get back to neutral again.  Are they telling us that we have new lows ahead for gold and silver?  I’m not sure.  If the trade talks don’t bear any fruit, then we probably do.  Likewise, if the buck starts to scream higher again, that’s probably also a bad thing.

We will have to see how it plays out.  I think for now at least, we move higher.  If we start to see some short-covering in gold and silver, things could get really exciting, but so far there is no evidence of that.