Market-moving news today: China rolled out a “long-awaited interest rate reform”; the details were a bit impenetrable for me, but it seemed as though the PBOC lowered a “lending reference rate” by 10 basis points. Tea-leaf-readers surmise that this is just the start of a larger rate-cut campaign by China to stimulate their economy – and that may have been part of what helped to encourage money back into risk assets today.

There was also some unverified chatter from WAPO (citing “three people familiar with the discussions”) about “senior white house officials” discussing a potential US payroll tax cut to help stimulate the US economy, which probably helped sentiment today as well. Payroll tax cuts are as close as it comes to “money printing for the masses”, since payroll taxes are the most broad based (and regressive).

Lastly, hints of fiscal stimulus from Germany (of all places).  Germany, more than most, has room on the balance sheet for more spending, with a debt/GDP of 60%, the envy of the industrialized world.  But things aren’t all that bad just yet, so there is reluctance to pull the trigger.  Right now, talk of a stimulus is just – talk.

Gold dropped both in Asia and London trading sessions, making its day low (1503) a little after 7:30 am. The opening black marubozu was a bearish continuation, and forecaster fell, entering a downtrend. Today’s drop took gold through its 9 MA, which is bearish. Gold remains in an uptrend in both weekly and monthly timeframes.

Gold/Euros looked a bit better – it remains in an uptrend in all 3 timeframes.

COMEX GC open interest fell -4,230 contracts. It is good to see some short-covering on today’s decline. 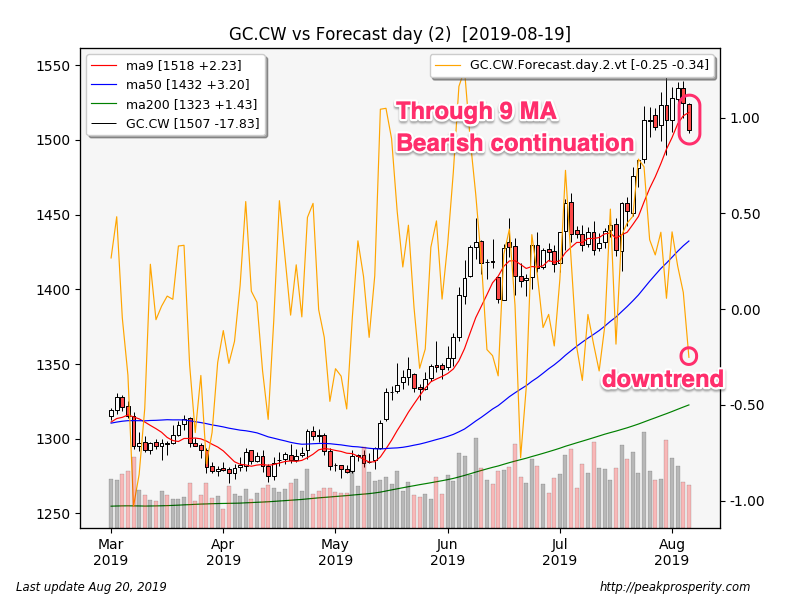 Silver looked a whole lot like gold today, dropping in Asia and London, making its low around 7:50 am. The closing black marubozu was a bearish continuation, and forecaster dropped hard, pulling silver into a downtrend. Today’s drop pulled silver below its 9 MA, which is bearish. Silver remains in an uptrend in both weekly and monthly timeframes. 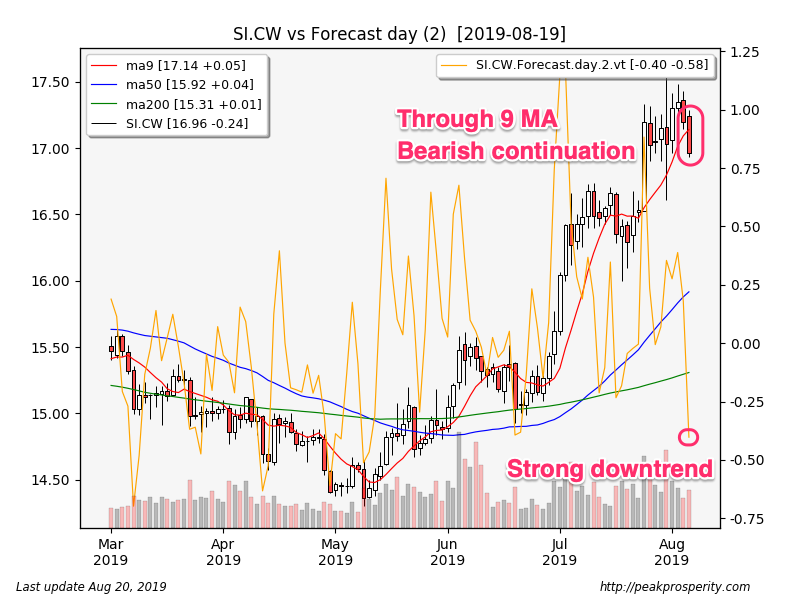 The miners gapped down at the open, tried to rally during the day but the rally failed. GDX fell -1.24% on heavy volume and GDXJ dropped -1.61% on moderately light volume. XAU moved down -0.86%, the doji was a bearish continuation, and forecaster moved lower into a strong downtrend. The drop also took the weekly into a downtrend as well – leaving XAU in a downtrend in both daily and weekly timeframes. 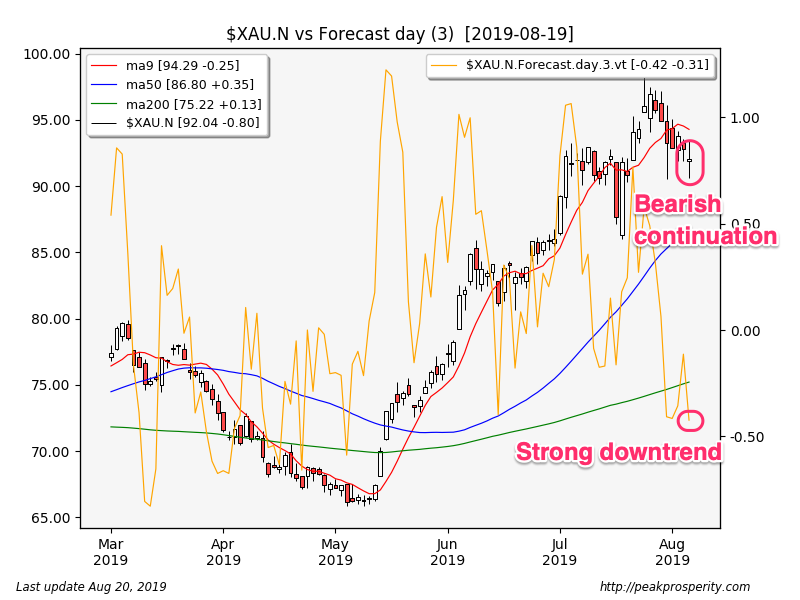 Platinum rose +0.31%, palladium jumped +2.16%, while copper moved up +0.44%. The other metals all did reasonably well – palladium is back in a reasonably strong uptrend, while copper has yet to meaningfully recover and remains quite near its recent lows.

Crude jumped +1.16 [+2.12%] to 55.84. The long white candle was a bullish continuation, and forecaster jumped strongly into an uptrend. The move was enough to pull the weekly into an uptrend as well – crude is now in an uptrend in all 3 timeframes.

SPX rallied +34.97 [+1.21%] to 2923.65. Almost all of the gains came in the futures markets overnight. The opening white marubozu was a bullish continuation, and forecaster moved higher into an uptrend. The move was enough to flip the weekly back into a (weak) uptrend as well – SPX is now back in an uptrend in all 3 timeframes.

TLT plunged -1.43%, printing a swing high. The forecaster dropped hard, and is now in a downtrend. TY also fell, losing -0.37%, the black marubozu was a bearish continuation, and forecaster dropped hard but remains in a uptrend – at least for now. In spite of today’s drop, TY remains above its 9 MA, and in an uptrend in all 3 timeframes. The 10-year yield rose +5.9 bp to 1.60%. Today was a swing low for the 10-year yield. Is this a real reversal? Its too soon to tell.

JNK jumped +0.33%, the opening white marubozu was a bullish continuation, and forecaster jumped back into an uptrend. JNK’s rally supports the risk on theme tody. BAA.AAA differential rose +2 bp to +90 bp. The differential is not signaling any sort of concern over credit quality.

We should not expect politicians to sit back and just let recessions happen. They want to remain in power – they will pull all the levers they can to keep the economy from turning down. And when news of these measures breaks, it will cause rallies in risk assets, like we saw both Friday and today.

This is why “going short” is difficult. People have that optimism bias, buying the dip has been the right move for the past 9 years, and so the snap-back rallies can be quite strong.

Will China’s 10 bp rate cut move the needle? No. Manufacturing is in recession in Germany, in the US, and probably in China too.  A 10 bp rate cut by the PBOC won’t do anything to change this in the near term.  Supposedly, rate cuts take 9 months to take effect in the real economy.

The more bad news that appears, the more efforts that our friendly politicians will make to avert potential disaster.

I can’t wait to see what the ECB will announce.  Neither can the junk bond market….apparently.  Anyone who imagines “the buck will turn into confetti” in the near term needs to look outside the borders of the US every now and then.  This should be very good for gold.  Theoretically.

Interesting article about swine Ebola (CPE) in the hog population in China. Estimates are 25%+ of the chinese pig population will die this year (year of the pig?) and some estimates are that 20-40% have already died.

According to the British Veterinary Association, CPE  “is an acute viral hemorrhagic fever which, in domestic pigs and wild boar, results in case fatalities approaching 100 per cent.”

If this is true, those poor chinese in the countryside may get upset. It could make those Hong Kong protests look cute. I guess we’ll see.

Thanks to THC for sharing the article on daily news.

I would note, it’s written by Hayman of who Kyle Bass is instrumental. He could be talking his book…