The standout seems to be the industrial/precious metals group, which was absolutely clobbered today, with crude oil helping matters out by falling too. This doesn’t appear to be a “Turkey” thing. I expect its more related to China.

Here’s the metals sector map, to give you the big picture.  Palladium sure had a bad day.

Gold fell all day long, every bounce being sold. The opening black marubozu candle was a bearish continuation. Forecaster edged down -0.03 to -0.40, a fairly strong downtrend. Gold remains in a downtrend in all 3 timeframes. Gold in Euros issued a sell signal on the daily chart, remains in an uptrend on the weekly, and a downtrend on the monthly.  The weekly RSI-7 for gold is 9.  You don’t see that every day.  Gold has dropped 14 of the last 18 weeks.

COMEX GC open interest rose 6,645 contracts. There was no short covering on the plunge, which suggests to me that prices will move lower. 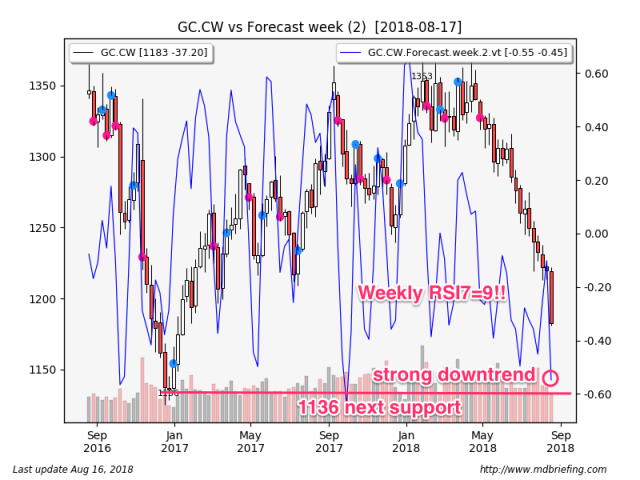 Silver moved lower in Asia and London, but the move really accelerated shortly after the US market opened with silver plunging 35 cents in about 20 minutes. Low for the day was 14.34, exactly the level of the previous low set back in July 2017. The strong line candle was a bearish continuation, and silver forecaster plunged -0.34 to -0.57, which is a strong downtrend. Silver remains in a downtrend in all 3 timeframes.  You can see that silver bounced off 14.34 support on the weekly chart.  Let’s hope it holds.

COMEX SI open interest fell -3,108 contracts. Looks like some traders covered on the plunge; perhaps they rang the cash register at 14.34. Armstrong says that only shorts are gutsy enough to buy at the lows – because they are actually cashing in. 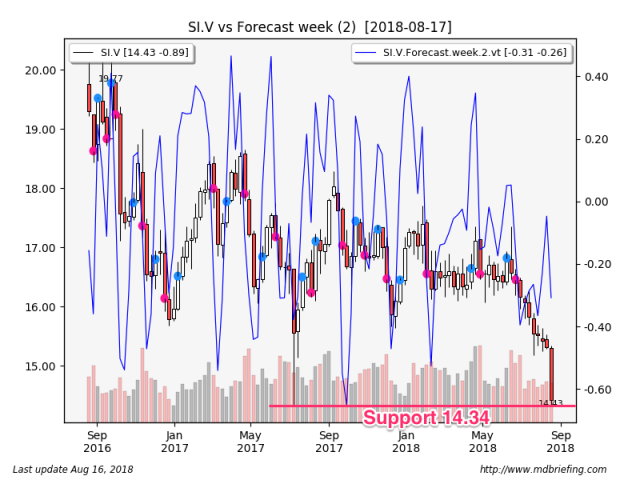 Miners gapped down at the open, plunged until noon, tried rallying – the rally failed – and ended up closing at or near the lows. GDX fell -5.92% on extremely heavy volume, while GDXJ plunged -5.83% on extremely heavy volume also. XAU fell -6.55%, worse than both ETFs; the strong line candle was bearish, and XAU forecaster fell -0.27 to -1.03, which is a very strong downtrend. The move took XAU below the previous low – there is only air between here and the 2016 lows. If gold continues to fall…we could well get to that point. 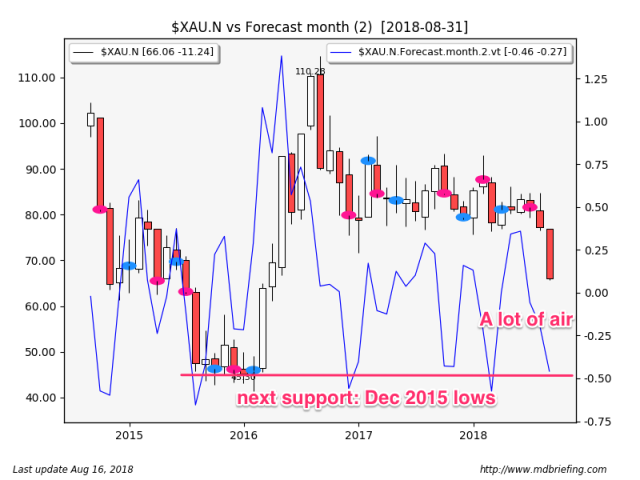 Crude fell -1.56 [-2.37%] to 64.23, plunging along with the metals. Crude had its own troubles, however: the EIA report was bearish (crude: +6.8m, gasoline: -0.7m, distillates +3.6m), and crude prices more or less collapsed immediately after the report came out at 10:30 am. There is rough support for crude at 64, which also happens to be the 200 MA. Crude is in a downtrend in all 3 timeframes now. One contributing factor: Libya reported that it is now shipping 1 mbpd of crude. Likewise, a shipping report showed that China and India imported 500 kbpd less oil in July than in previous months. 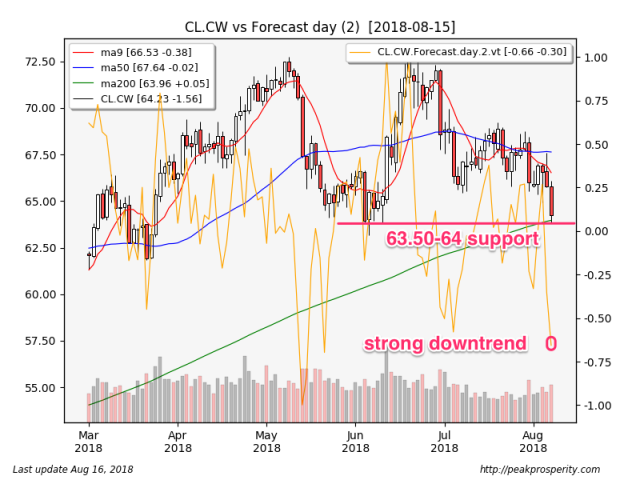 SPX fell -21.59 [-0.76%] to 2818.37. Much of the damage happened overnight in the futures markets; SPX continued falling during the trading day, but managed to bounce back by the close. Daily forecaster remains in a downtrend, weekly will issue a sell signal this week, while monthly remains in an uptrend. SPX remains below its 9 MA. Sector map shows utilities doing best (XLU:+0.92%) while energy led the market lower (XLE:-3.49%); energy really cratered today. This was a bearish sector map. You never like to see utilities in the lead.

JNK fell -0.22%, making a new low today. JNK remains in a downtrend, but like SPX, not a very strong one.

CRB plunged -1.83%, making a new low, with 4 of 5 sectors dropping, led by industrial metals (-3.90%). That’s economic activity/China.    Commodities are now in a pronounced downtrend – down almost 10% from the highs in May.  I read an article that suggested this move paralleled the move down in CNY.  This is largely true.

So what was the big China news? Looking through the SCMP (South China Morning Post) I found references to some poor retail sales data – among many other things – that indicates a slowing economy in China.

… rising consumer debt and concerns over the outlook for incomes have forced some consumers to rein in their spending this year.

The NBS data mirrors the findings of a recent study by the China National Commercial Information Centre, a state-backed consultancy, which suggested that the drop in consumer spending was gathering steam.

It showed that sales at 50 major Chinese retailers fell by 3.9 per cent in July from a year earlier, accelerating from drops of 3.4 per cent in May and 0.6 per cent in April.

According to government data released on Tuesday, car sales fell 2 per cent in July from a year earlier, the third straight monthly drop. Also, growth in home appliance and audiovisual product sales plunged to 0.6 per cent from 14.3 per cent in June.

So maybe that collection of things was the cause. Its hard to know.

There is a bit of good news, however – China has announced they are sending a trade negotiator to Washington at the end of the month. Perhaps there will be a thaw in the trade war. At least, that’s the hope anyway.

Perhaps in response to this, USD/CNY retreated about 1% this morning in Asia trading, down from a near-record 6.93 at the close of yesterday’s trading. And at the same time, gold, silver, and the other metals have rallied off their lows – at least so far. It is probably too soon to tell for certain, but…this could be the low for gold and silver for a while. 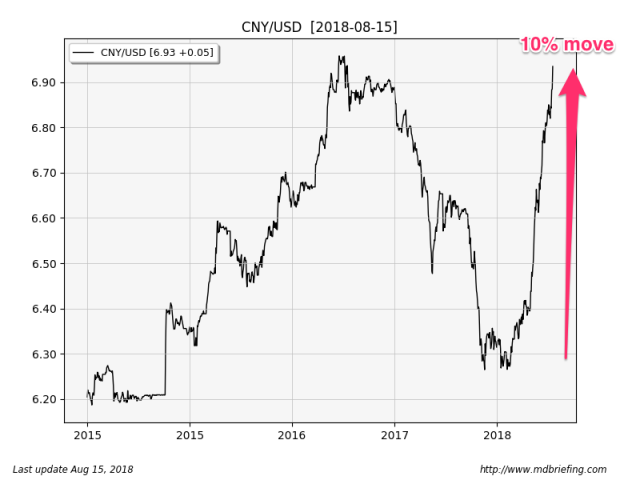 Ok, maybe it is too soon to call the low. But I am hopeful. Things are so dreadfully oversold, the shorts are looking for an excuse to cover and ring the cash register.  You don’t see the miners with RSI-7 levels of 6 very often.

Here’s what that looks like in the metals space – my favorite RSI table.  It may sound ridiculous after all the beatings – 14 weeks down – but … remember the emotion you are feeling right now.  That’s how capitulation feels.  You never want to see gold, silver, or a mining share ever again.

And that’s usually – right around – the low.  I use the RSI values to reassure me that I’m not crazy.  That’s what they are for.