Gold chopped sideways in Asia, was pounded lower at around 2:40 am, but then rebounded sharply at roughly 4 am, moving back into positive territory; a 90-minute $8 dip was bought hard. Long after that rally, there was a very strong spike to new highs at roughly 2:40 pm in the US session – I’m not sure what that was about, but it was good for $12 over 2 minutes and a great deal of volume. The long white candle was a bullish continuation, and forecaster moved higher and remains in an uptrend. Gold is in an uptrend in all 3 timeframes. 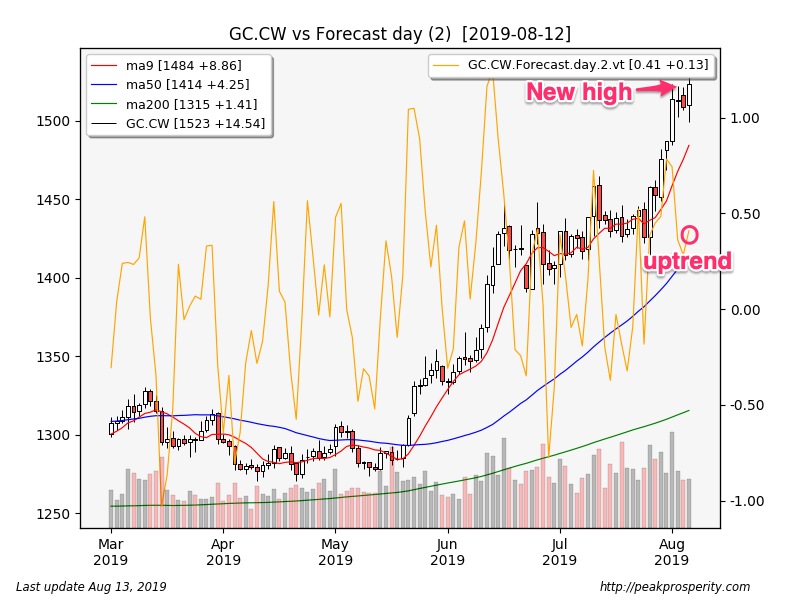 Silver followed gold lower in the early AM, rallied back to flat, and then moved more solidly into the green in late-morning trading in the US. The long white candle was bearish (50%), but forecaster inched higher, just enough to move silver into a slight uptrend. While silver’s daily uptrend is quite tentative, the weekly and monthly trends remain very strong.

COMEX SI open interest fell -4,743 contracts. There is some short-covering. On a rally. 10 days of global production in paper removed from trading. I wonder who is covering. 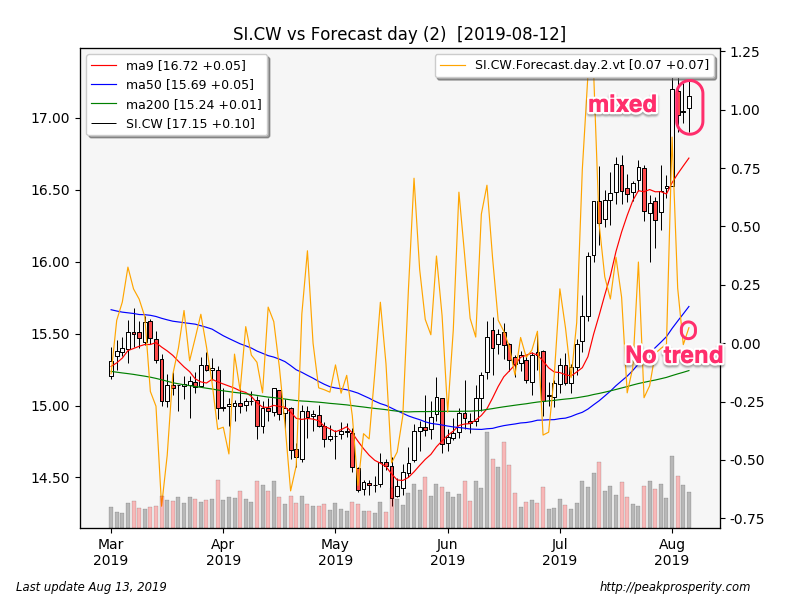 The miners gapped up at the open, moved lower, and then sold off fairly hard in the afternoon. GDX fell -1.23% on moderately heavy volume, and GDXJ dropped -2.01% on heavy volume. XAU fell -0.87%, the closing black marubozu was mixed, and forecaster fell, but XAU remains in a slight uptrend. In spite of today’s decline, XAU remains in an uptrend in all 3 timeframes, and above all 3 moving averages. Today’s drop was odd – with gold up $14, and even silver up $0.10, why did the miners fall? Does it mean something? It might. 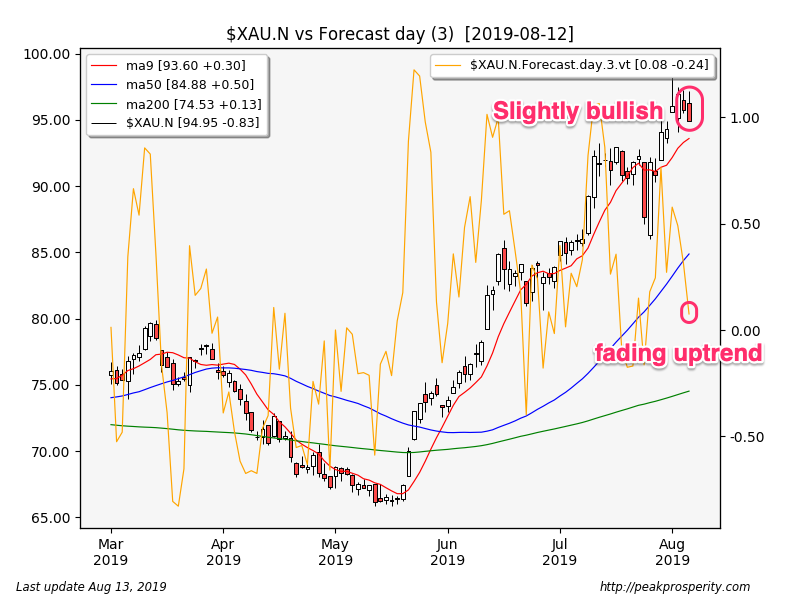 The buck fell -0.13 [-0.13%]. The long black candle was mildly bullish (39%), but forecaster fell just enough to move the buck into a slight downtrend. The buck is now in a downtrend in both daily and monthly timeframes.

That said – this is the DX, which are the “major currencies” that were set back in 1975, which was a very long time ago. This index does not include China. I really need to find a new index that updates daily, has a long trading history, and includes China as well. The “trade-weighted” dollar index may have daily ticks, but it only updates weekly. I’ll look around and see what I can find.

Crude rallied +0.58 [+1.07%] to 54.58. It sold off early in the AM, but came back strongly a few hours later, making its day high just as the US markets opened at 9:30. The long white candle was a bullish continuation, and forecaster shot higher into a reasonably strong uptrend. This is the third rally day off the lows set last week. Reaction rally or reversal? Its hard to say. Crude is in an uptrend in both daily and monthly timeframes, and might be about to reverse on the weekly. Still, the longer-term trends remain weak. I have a relatively new bit of code that issued a buy today for crude. Not sure how well it works – definitely not financial advice.

SPX plunged -35.95 [-1.23%] to 2882.70. Much of the drop happened in the futures markets overnight. There was a bounce at end of day, bit it looked pretty feeble. The opening black marubozu was somewhat bullish (42%), and forecaster moved slightly higher and remains in a mild uptrend. SPX remains in an uptrend in both daily and monthly timeframes, but both uptrends look very weak. SPX could tip over with just one or two more declines.

JNK fell -0.26%, the southern doji was mildly bullish (43%), and forecaster moved lower but remains in an uptrend. BAA.AAA differential ended Friday at +88 bp, and remains in a downtrend. Once again, junky debt is signaling that basically nothing is wrong. Given the 4-alarm fire signaled by the 30-year bond, I believe that the junky-debt “all is well” signal is the result of central bank deformation – or at least the expectations of more intervention in the very near future.

Trump says the US economy is great. Meanwhile, Hong Kong is on the edge of being occupied by the Chinese Army (who are conducting “riot drills” right next door in Shanghai) 27 years ahead of schedule, Boris Johnson’s primary plan is a no-deal exit – assuming the EU continues to cling to that one-sided withdrawal agreement “negotiated” by May, Germany (#2 exporter in the world) is entering a very serious manufacturing recession (last INDPRO number: -1.5% m/m, or -18% annualized), China has nationalized failed bank #3 while presumably it too is dropping into recession. Do we imagine China is doing better than Germany? I don’t think so.

The ongoing move in gold and bonds is signaling that something is very wrong. Silver is not following, neither is platinum. This is not the same PM rally we saw in 2011, something entirely different is going on here. Big money appears quite scared.

Big money is far more well-connected than you and I. We only get told the real story in the history books. And often not even then. They get to know such things in real time. All we can do is follow their “tracks in the snow” – by watching prices.

After the US market closed, gold has moved to a new 6-year high of 1538 in Asia. Silver is finally following, and so is platinum, at least to some degree.

I’ve written this column for seven years now. I have never seen gold behave this way. All my indicators continue to point higher. Weekly, monthly, and quarterly all look extremely strong.

I’m going to ignore the miners, at least for now.  They, like silver, aren’t attracting money the same way that gold and bonds are.  But I don’t think either miners or silver are telling us where prices of PM are headed next.  That’s just my gut feeling, based mostly on the long bond screaming higher.