The Fed ended up doing nothing, as expected; in the announcement, there were some word tweaks that added up to “the economy is stronger than it was at our last meeting.” The market impact was minor.

Gold spent the day moving south, along with the rest of the metals. The long black candle was a bearish continuation; forecaster dropped -0.63 to -0.44, dropping gold back into a downtrend. Today’s close was a new closing low for gold, and it dropped gold back below its 9 MA. I expect that if the metals complex as a whole breaks down further, it will drag gold right down with it. 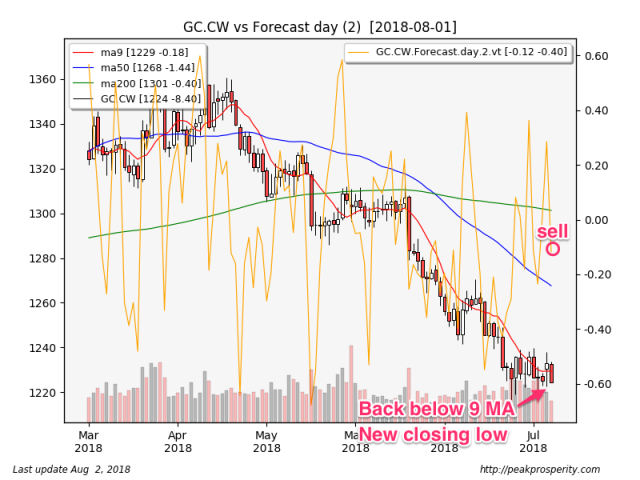 Silver fell all day long. The closing black marubozu was a bearish continuation; forecaster fell -0.54 to -0.28, which was a sell signal for silver. Silver managed to avoid a new closing low, unlike gold, but it too dropped below its 9 MA today. If copper makes new lows, so will silver. It all pretty much depends on tariffs. 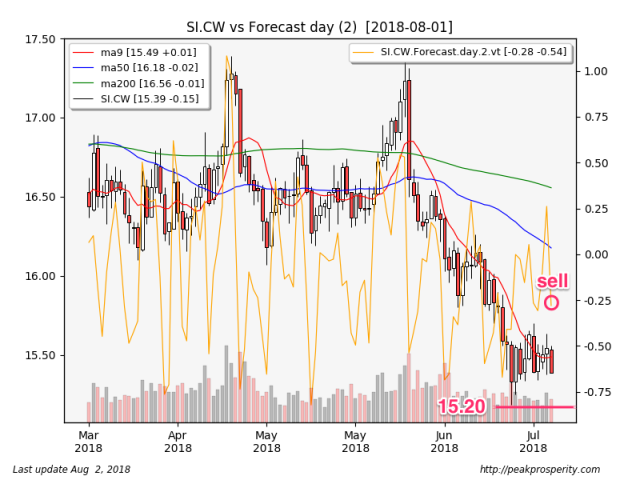 Miners fell, with GDX off -0.80% on moderate volume, while GDXJ dropped -0.57% on moderate volume also. Both miner ETFs made new lows, printing a variety of bearish-looking candles. XAU fell -1.85%, substantially worse than the ETFs,. It hasn’t quite broken down below the previous low set back in December, 2017, but it is very close to doing so. Miners remain weak. 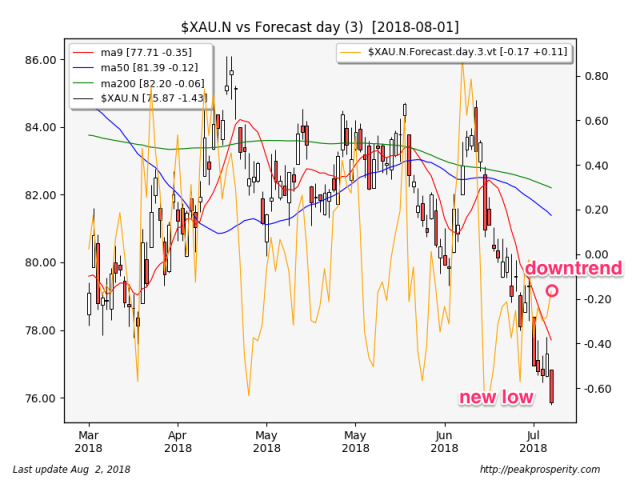 As mentioned, platinum fell -2.66%, palladium dropped -1.68%, and copper lost -2.84%. This was all driven by tariff news. Copper and platinum both issued sell signals, while palladium is just barely hanging on. The metals could be preparing to take another leg down; they look pretty weak right now.

The buck rose +0.14 [+0.15%] to 94.25. The modest move pulled the buck back up above both the 9 and 50 MA lines, which flipped the forecaster back into an uptrend – for the 5th time in two weeks. Pulling back to the weekly, we see that the upside momentum for the buck continues to slow. The buck really could go either way at this point; if it starts rising again – say it breaks through 95 – that would of course be bad for PM. 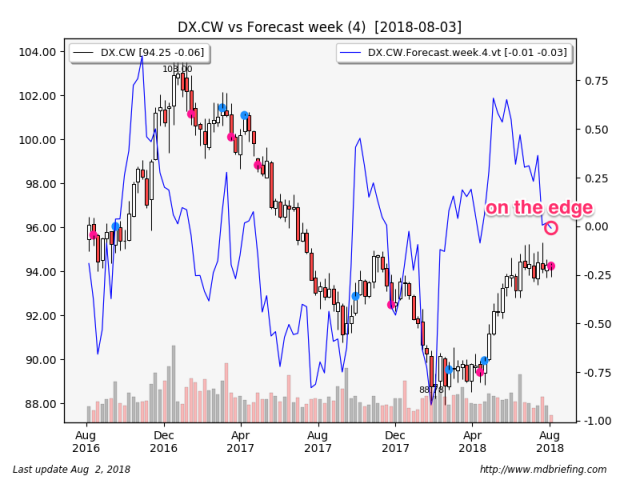 JNK plunged -0.36%, printing a swing high (59% bearish reversal). Forecaster fell, but has not issued a sell signal just yet. I’m not quite sure what made JNK unhappy today; it didn’t look particularly risk-off to me.

Well the FOMC meeting announcement was a big nothing-burger, but the ramping up of the tariff threat to 25%, up from 10%, definitely did wang prices around, especially in the metals space. Copper was the biggest loser; it is threatening to re-test the 2.67 low set a few weeks back. My guess is that the Chinese didn’t offer any more concessions in the hinted-at negotiations, so Trump decided to ratchet up the pressure.

This is what they call a “news-driven market”, which means that any sort of technical analysis takes a back seat to what the guys in the back rooms decide to do on any given day.

“Certainly, we would like to see the playing field leveled,” White House Press Secretary Sarah Sanders said in a briefing on Wednesday. “But until that happens, the president is going to hold their feet to the fire. He’s going to continue to put the pressure on China.”

A longer article at Asia Times puts a framework around the situation that won’t be found in the Trump-bashing media circus:

Gold’s near term future – as is the case with the rest of the metals – seems tied to what happens with China and tariffs.