Gold rallied $10 in Asia, chopped sideways until about 8 am, and then fell perhaps $12 in about 4 hours. The spinning top candle was unrated, and forecaster fell deeper into a downtrend. The weekly forecaster did inch higher, however, and moved back into a slight uptrend. This puts gold in an uptrend in both weekly and monthly timeframes. 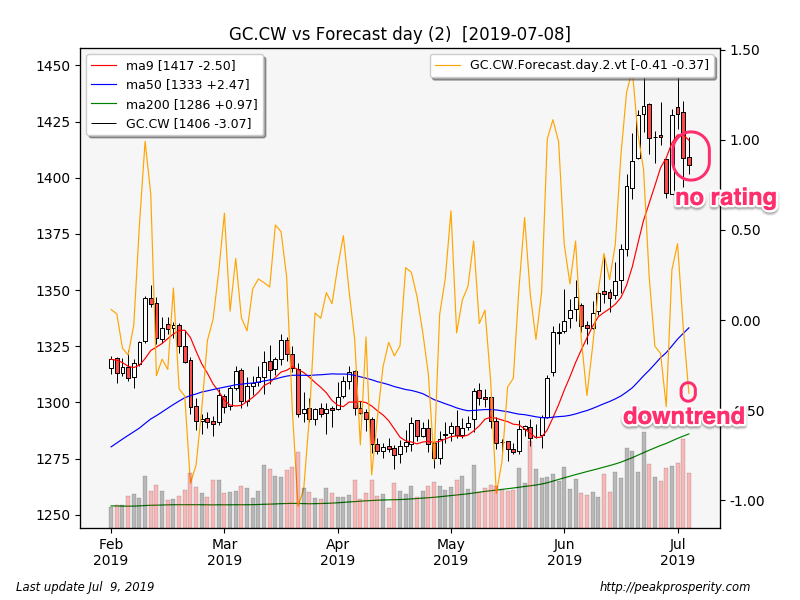 Silver rallied in Asia and London, topping out around 8:30 am, and then fell for the rest of the day. The doji candle was unrated, and forecaster moved lower, but the downtrend remains quite mild.  Silver is in a downtrend in both daily and weekly timeframes. 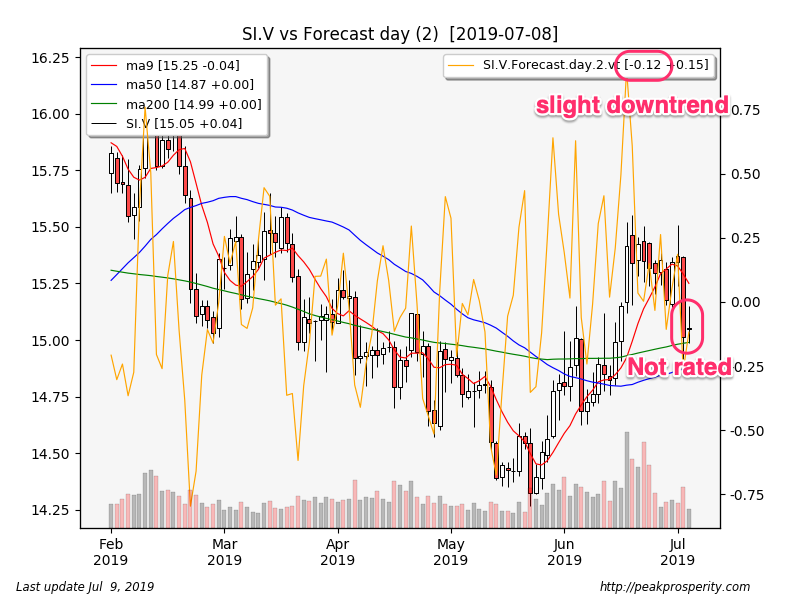 The miners fell in the morning, rallied in the afternoon, and then fell towards end of day. GDX rose +0.12% on moderate volume, while GDXJ dropped -1.01% on heavy volume. XAU fell -0.04%, the short black/spinning top candle was bearish (42%), but forecaster moved higher, pulling XAU back into a slight uptrend. XAU is now in an uptrend in all 3 timeframes – although the daily and weekly trends are only slightly positive. 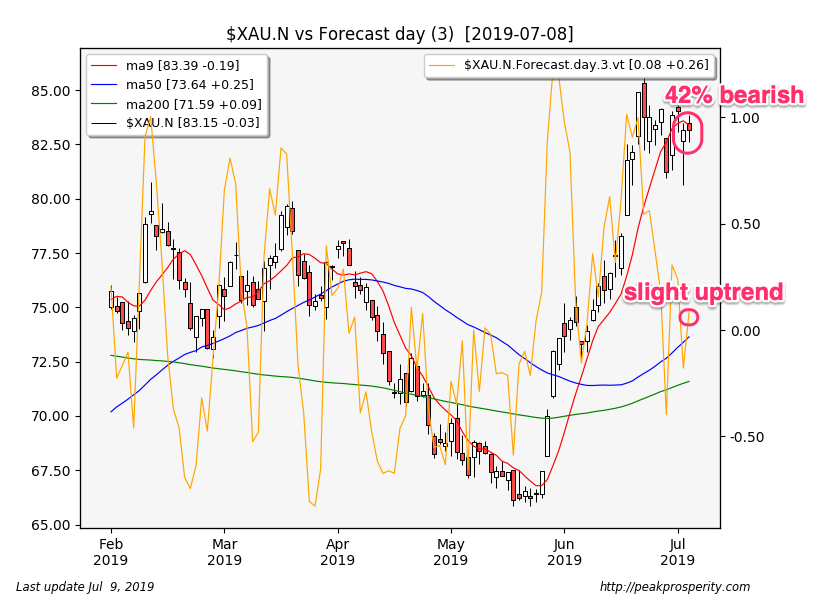 The buck rose +0.07 [+0.07%] to 96.85. The short white candle was unrated, and forecaster moved higher into a strong uptrend. The move took the weekly forecaster into an uptrend too, which leaves the buck in an uptrend in both daily and weekly timeframes. Monthly is also on the edge of a bullish reversal as well. The better the economic news, the stronger the buck will become.

Crude fell -0.15 [-0.26%] to 57.64. Crude tried to rally today but failed; the spinning top was somewhat bearish (44%), but forecaster moved higher, moving into a very slight uptrend. Crude is now in an uptrend in all 3 timeframes.

SPX fell -14.46 [-0.48%] to 2975.95. Much of the move happened in the futures markets overnight. The short black/NR7 was unrated, but forecaster plunged leaving SPX in just a moderate uptrend. SPX remains in an uptrend in all 3 timeframes.

TLT moved up +0.14%, enough to drop TLT into a short-term downtrend. TY fell -0.15%, the long black candle was unrated, and forecaster moved lower into a moderate downtrend. TY remains in an uptrend in both weekly and monthly timeframes. The 10-year yield fell -1.4 bp to 2.03%.

JNK fell -0.17%, with forecaster dropping into a fairly strong downtrend. BAA.AAA differential jumped +8 bp to 1.12%; this took place on Friday (the series is one day delayed) and was a very large move.  Perhaps this is due to “liquidity concerns” stemming from a ban on redemptions on a UK equity income mutual fund.  Apparently the fund has a bunch of illiquid assets in it, but it promises holders daily liquidity.  That works fine until some of its assets go bad, then there is a run on the fund, and the fund manager ends up slamming the redemption window “until further notice” (i.e. until liquidity returns to the underlying assets).

So we saw the BAA.AAA differential jump substantially in response.  I’m not saying you should “do something”, but I am reminded of one of the “rules of trading”:  rule #1: don’t panic.  Rule #2: if you need to panic, make sure you panic first.  Be the first or second one out the small, small door if you’re a holder of illiquid items and “things start looking iffy.”

Powell is giving his semi-annual testimony to Congress today – at 10 AM.  The thought of a July rate cut with a jobs number at +224k just seems really unlikely to me, and yet the futures markets still have at least 1 rate cut locked in.  Will Powell go back to “patient”?  In my opinion, that would lead to a dollar rally, and a decline in both gold and equities.  (It is very odd how gold and SPX are tied together right now).

So while not much happened yesterday – I think today might be another matter entirely.