There were two market-moving news items today: #1, a strong, inflation-free Personal Income & Outlays report, which showed a large spending increase in both personal income and consumer spending (+0.4% m/m) and a relatively calm PCE (inflation) change to both core PCE and the main index (+0.1% m/m). This report reversed a 45 cent Euro rally and caused the Euro to plunge all the way back down into negative territory. This move caused PM to initially sell off, until #2 appeared: a rumor that the US and China were trying to restart negotiations to defuse a trade war, which occurred right around 9:15 am.  This news item popped copper higher, and the rest of the metals soon followed.

After discussing contango yesterday, I decided I’d better just go and change my code to use a calendar-weighted futures pricing model. It turned out, my code works significantly better with gold when I do this. Who knew? Anyhow, you’ll see “CW” on the charts from here on out. As a result, the prices will be a bit odd for people in the know (gold rising +7.87 is an odd number – GC futures are priced in increments of 10 cents), and the prices themselves won’t align with what is reported by stockcharts for $GOLD, and so on. As math prof of mine used to say, “and for the pedants in the class” (of whom, I suspect, there were actually none)…calendar weighting basically uses the front 2 contract prices to calculate the “calendar-weighted” price, slowly changing the weighting from #1 to #2 as the days move closer to expiration. So for instance, on day #30 prior to expiration, the price is almost all contract #1, and on day #1 before expiration, the price is almost all contract #2, the idea being to avoid the $9 jump that happens on a volume-weighted contract roll. That’s for all you pedants out there.

So, gold chopped sideways for the first half of the day, spiked down immediately following the PIO report at 8:30 am, and then bounced hard at about 9:20 on the US/China negotiations rumor. Candle print was a confirmed bull NR7 (42% bullish reversal) and the new CW forecaster jumped +0.36 to +0.35, which is a buy signal (that I actually trust) for gold. Gold is now back above its 9 MA. While gold remains in a downtrend in the weekly and monthly timeframes, the weekly is moving quite close to issuing a buy signal.

COMEX GC open interest rose 5,020 contracts.  Looks like managed money is back to going short on the rallies.  I wonder if they’ll continue to do this if/when the trade negotiations rumor is confirmed.

Rate rise chances (September 2018) could not be updated due to a CME website error. 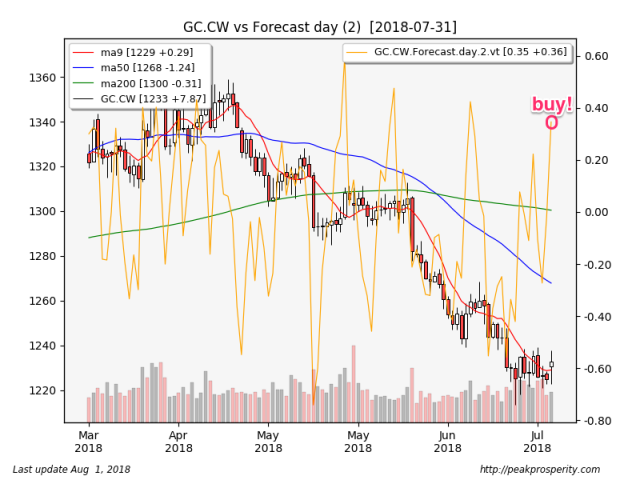 Silver looked a lot like gold intraday – selling off at 8:30 am, bouncing at 9:20, and then closing the day in the green, helped by the US/China trade rumor. Silver’s high wave candle was neutral, and silver’s forecaster (which I’m still working on) issued a buy signal, up +0.34 to +0.25. Silver is now a bit more convincingly back above its 9 MA. Both daily and weekly forecasters are in an uptrend for silver, while the monthly remains in a downtrend. 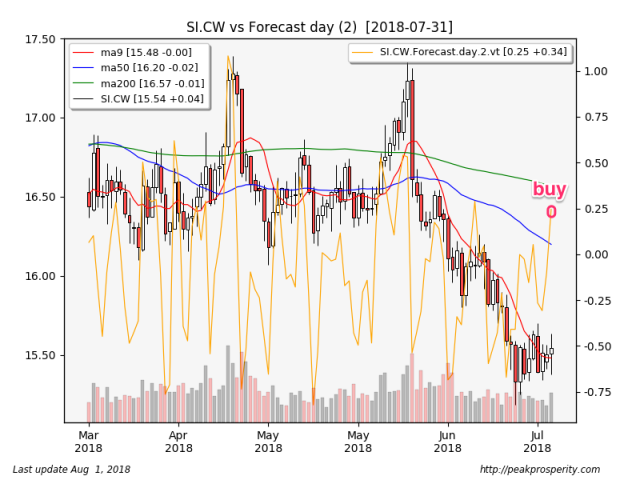 Miners moved fractionally higher, with GDX up +0.05% on moderate volume while GDXJ rose +0.06% on very light volume. XAU did substantially better than the ETFs, rising +0.81%, and printing a swing low (50% bullish reversal), and XAU forecaster also issued a tentative buy signal (up +0.07 to +0.03). The miner chart is still looking weaker than the metals, but it may be ready to bounce here.

The GDXJ:GDX ratio rose +0.02%, while the GDX:$GOLD ratio fell -0.59%. That’s a bit bearish; miners underperforming gold is not a great sign. 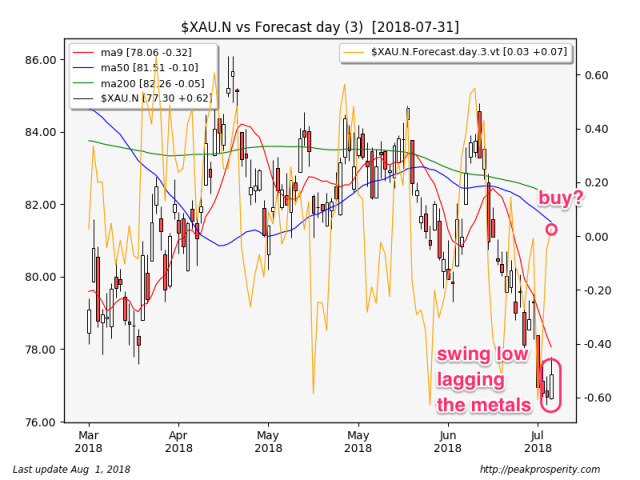 Platinum rose +1.29%, palladium climbed +0.68%, while copper moved up +1.08%. All three of the other metals jumped higher around 9:15 am on the US/China trade rumor, with copper moving strongest. Copper issued a daily-chart buy signal today, as did platinum. The other metals looked fairly strong today. If the rumor is confirmed, I’d expect a much larger rally to occur.

We have an FOMC meeting happening right now, with the announcement tomorrow at 2pm, and the press conference at 2:30. The big question at this month’s meeting: is policy right now “loose”, or is it heading more towards appropriate? Market participants are looking for signs that the rate hike campaign might be drawing to a close.

Federal Reserve officials meeting this week are grappling with an important milestone in their effort to raise interest rates gradually without derailing the economy: When to tell the world that interest rates are no longer all that low — or more accurately, that monetary policy is no longer “loose.”

Crude fell -1.67 [-2.38%] to 68.42. The selling started around 9 am, pushing price down about a buck; after market close, a bearish-looking API report (crude: +5.6m, gasoline: -0.8m, distillates: +2.9m) spiked prices down another 80 cents. Ouch. Candle print was a swing high (59% bearish reversal), and crude forecaster issued a sell signal. Crude is now below its 50 and 9 MA lines, and the weekly has moved back into downtrend. Crude really needs a positive EIA report tomorrow, or else it could easily make new lows by end of week. 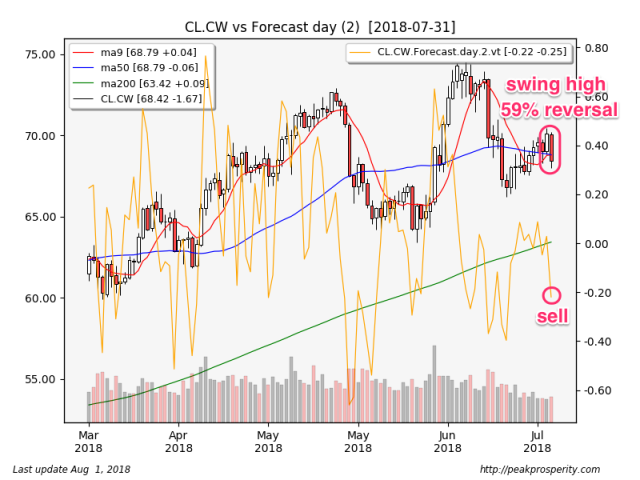 SPX rose +13.69 [+0.49%], recovering much of yesterday’s losses. The bullish harami was actually a bearish continuation, however, and SPX forecaster inched up just +0.03 to -0.13, which is still a downtrend for SPX. SPX remains in a downtrend in both daily and weekly timeframes. Sector map shows industrials led (XLI:+2.21%) along with sickcare (XLV:+1.05%), while financials trailed (XLF:-0.71%). SPX appeared to benefit from the US/China trade talks rumors; the minis spiked up at 9:15 along with copper and the other metals.

JNK rose +0.20%, which is another new high – up to but not quite surpassing the previous high set back in June. A break above the previous high is technically important, as it will invalidate the bearish pattern of lower highs and lower lows that have plagued JNK for months. JNK is looking quite strong right now, and for it to rally this much on a day when oil plunges – that’s a risk on sign for sure.

It looks as though PM prices were saved by the rumor on the restarting of US/China trade negotiations. If there is a middle ground that both parties could reach, then Trump gets a win ahead of the midterm elections, and Xi avoids a recession and a whole lot of uncertainty for US globalized companies that are wondering how things will all turn out.  There really could be space for some sort of deal.  I’m guessing the US/EU tariff detente has strengthened Trump’s hand – perhaps as intended.  Trump makes a big show of hosing Europe, but the real target is China, with Trump relenting to the Europeans if they will come on board the “tax China train.”  Was it all a master plan, or did Trump just bumble his way to victory?  It depends on which network  you watch, I suppose.  And we don’t have a deal just yet.  But the leverage Trump has is improving by the day.  And – isn’t it iteresting that the tax stimulus provided a boost to the economy which provided a 4.1% GDP print right in the middle of all the tariff uncertainty?  A good GDP print = more leverage for Trump.

And if a deal does happen – the follow-on commodity rally could be really impressive.

We also have FOMC meeting announcement tomorrow at 2:00 PM, which also typically causes a fair amount of price movement.  It all depends on “loose” or “not-loose-anymore” or “getting less loose”.  Or whatever.