Gold moved lower in Asia, but then rallied slowly higher for the rest of the day. The spinning top candle was mildly bearish (35%), but forecaster moved strongly higher, entering an uptrend.   Gold is now in an uptrend in all 3 timeframes. 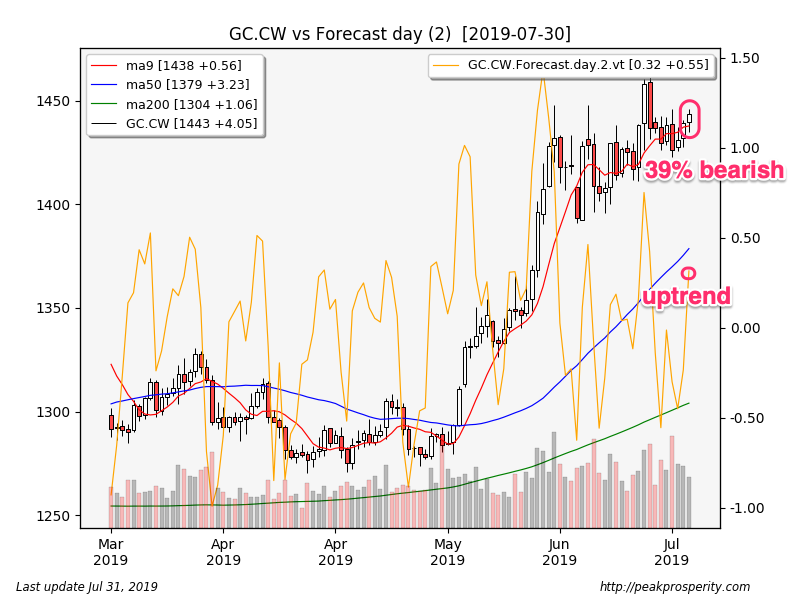 Silver dipped a bit in Asia, and then rallied through end of day. The long white candle is somewhat bearish (43%), but forecaster moved higher into an uptrend. Silver looks as though it is getting ready to break out to higher levels. Silver remains in an uptrend in all 3 timeframes. All the uptrends look reasonably strong, with the longer term trends looking best. 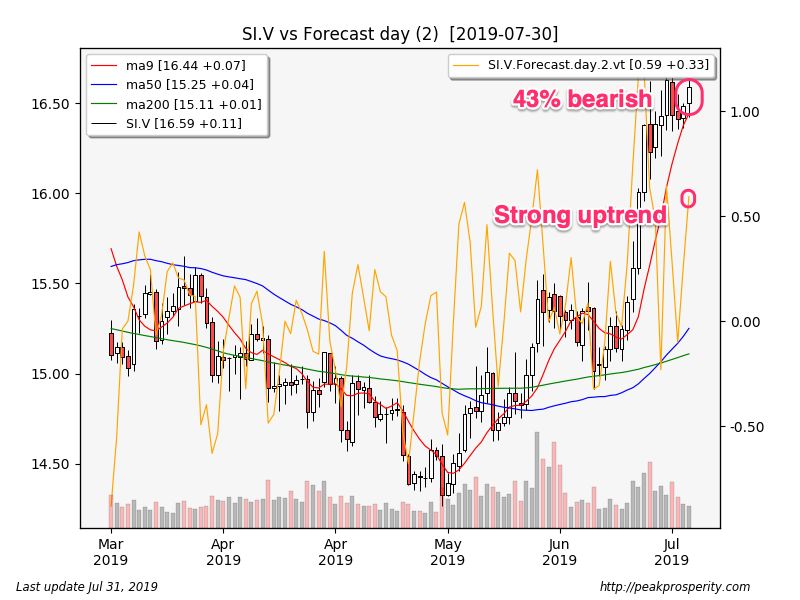 The miners gapped up at the open, but then mostly chopped sideways. GDX rose +0.22% on light volume, and GDXJ rose +1.14% on light volume also. XAU moved up +0.45%, the short white candle was a bullish continuation, and forecaster moved higher and is now in a mild uptrend.  XAU is in an uptrend in all 3 timeframes. 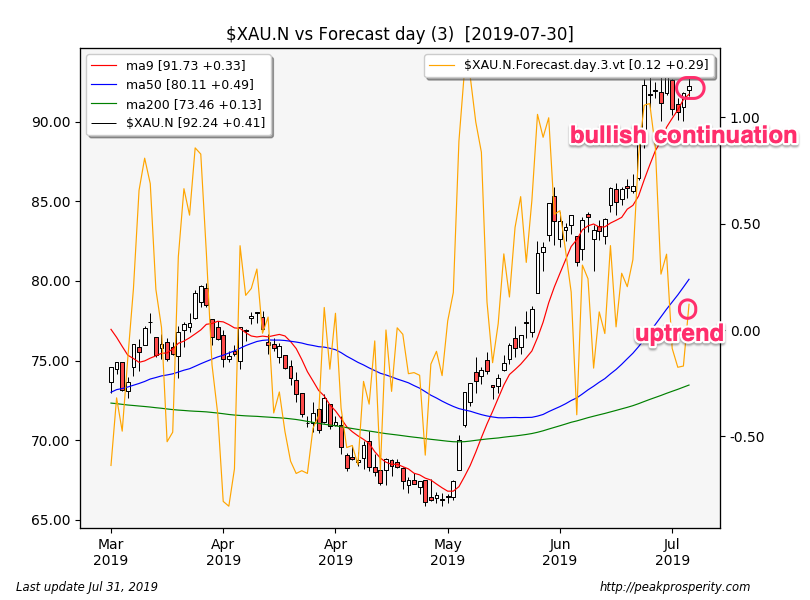 Platinum fell -1.05%, palladium plunged -2.53%, and copper dropped -1.53%. The other metals had a terrible day. Trump issued a tweet about the state of negotiations with the Chinese – it was generally negative. Perhaps this influenced the price of the metals to move lower – especially copper.

China is doing very badly, worst year in 27 – was supposed to start buying our agricultural product now – no signs that they are doing so. That is the problem with China, they just don’t come through. Our Economy has become MUCH larger than the Chinese Economy is last 3 years……My team is negotiating with them now, but they always change the deal in the end to their benefit. They should probably wait out our Election to see if we get one of the Democrat stiffs like Sleepy Joe. Then they could make a GREAT deal, like in past 30 years, and continue…to ripoff the USA, even bigger and better than ever before. The problem with them waiting, however, is that if & when I win, the deal that they get will be much tougher than what we are negotiating now…or no deal at all. We have all the cards, our past leaders never got it!

The buck moved up +0.03 [+0.03%] to 97.55. This was yet another new high for the buck, but not yet a new multi-year high. The spinning top candle was bearish (44%), and forecaster moved a bit higher, remaining in a strong uptrend. DX remains in an uptrend in both daily and weekly timeframes.

Large currency moves include: GBP [-0.50%]. That’s a new low for GBP, but not quite a multi-year low. Boris Johnson said that it was “up to the EU, this is their call” if the UK leaves with EU without a deal. No deal means about $40 billion ends up staying in the UK. It would seem to an uninformed observer that the UK has all the cards.

Crude jumped +1.24 [+2.17%] to 58.37. The long white candle was a bullish continuation, and forecaster jumped higher into what is now a strong uptrend. Today’s move took crude back above its 200 MA. Today’s rally also caused the weekly forecaster to jump back into an uptrend too. Crude is now in an uptrend in all 3 timeframes.

The bullish API report at 4:30 pm helped a little (crude: -6m, gasoline: -3.1m, distillates: -0.9m), but the market-moving news may have been that Iran and Russia were planning joint military maneuvers in the Indian Ocean and (perhaps) in the strait of Hormuz also.

SPX fell -7.79 [-0.26%] to 3013.18. The losses came in the futures markets overnight – futures were off perhaps 20 points by the open, but SPX bounced shortly after the open and managed to regain most of the losses by end of day. The spinning top candle was bullish (41%) and forecaster moved higher and remains in a moderate uptrend. SPX remains in an uptrend in all 3 timeframes.

JNK was virtually unchanged too [+0.02%] – but that was a bit deceptive; JNK gapped down hard at the open, and spent the entire day clawing its way back to almost-neutral. Forecaster didn’t like this much, and dropped further into a downtrend. The BAA.AAA differential remains at -90 bp, and in a strong downtrend. The markets are showing no credit concern at the moment.

I have to say, gold is looking quite strong going into the FOMC meeting, where the expectation is really only for 1 cut, not 2, and the odds of 3 cuts by December remain at only 50%.

I’m expecting the following: “we are of course data driven” but “there are cross-currents” (tariffs, recession in Europe), and “inflation is too low” (at least, if you don’t count rents and sickcare), and “we’re cutting rates just this once” and then we’ll “be patient” and see how things go. With those cross-currents, I guess.

My feeling is, the specifics matters less. What matters is how the market responds. If the Fed doesn’t say anything meaningfully dovish – like 1 rate cut and done – and gold breaks out to new highs, that’s bullish. If the Fed says something hawkish, and gold avoids selling off, that’s bullish too.

What gold actually does tomorrow is beyond my pay grade, but if I wrote a monthly report, I’d suggest that we ignore the meeting and watch gold (probably) continue to move higher.  Why?  gold/Euros weekly – it has risen 10 weeks in a row. Perhaps it is the ECB that is the driver, more so than the Fed.  Negative rates for 10 years now.  And, probably, a lot more repression to come. 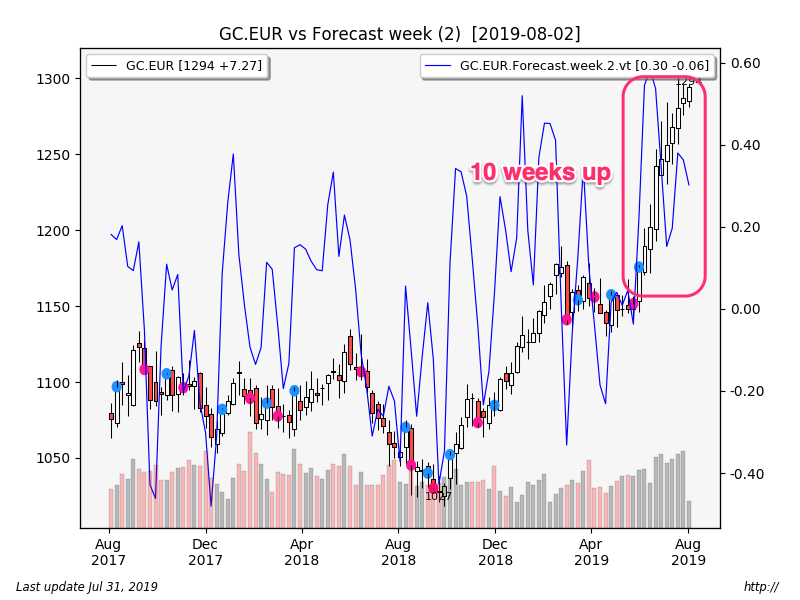 One more thing. Oil services staged a very intense rally off some “lowest prices ever” today. These services companies are either going BK, or they’ll be 10-baggers, but first we need US shale production to top out and start to decline. (Some well-known services have already gone through bankruptcy: Tidewater, Seadrill, to name two). So are we there yet? Above my pay grade again. But if you think “equities are overpriced, I can’t possibly buy”, just go look at the 2-decade price chart of money-losing Transocean (RIG), Diamond Offshore (DO), or Noble Energy (NE). [FD: I’m long.  I’m hoping US production peaks before they all go BK.  NOT financial advice.]

Note that today’s strong rally doesn’t even show up in the quarterly chart of RIG, below.  In 2006-2008, the thesis was “OMG Peak Oil”.  Perhaps you remember that.  Now, the thesis is “Shale Forever” coupled with “Peak Oil Demand!” 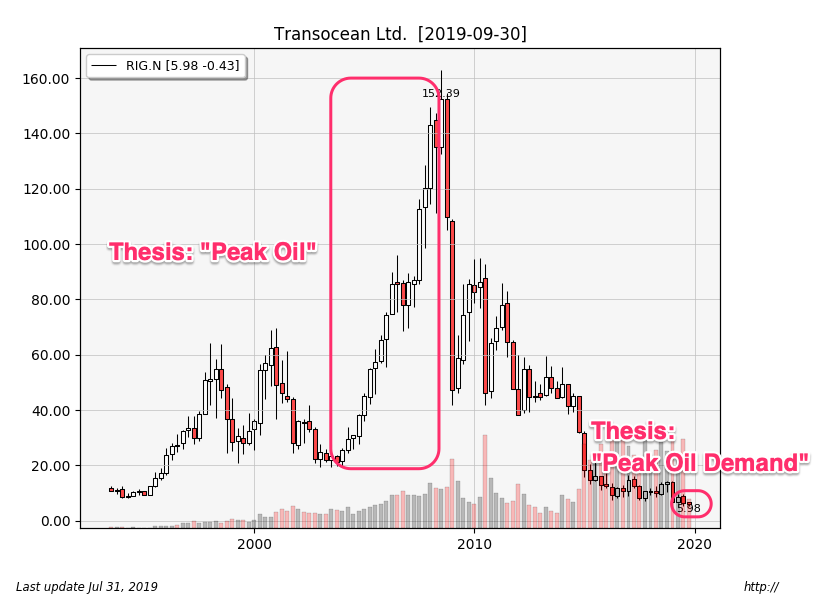 It was a good little run while it lasted.  Once again, the commercials were right.  Going to finish at the lows for PMs and miners across the board.  Not seeing very much in the way of positive take-aways from today.    Too bad.

not sure what the problem was, happy to see PMs take a breather. This just gives us more time to accumulate.