Gold rallied strongly at the open in Asia, hitting a new high of 1441, but then fell for most of the rest of the day, ending near the lows. The high wave candle looked quite bearish (51%), but forecaster moved higher into its modest uptrend. printed a swing low (66% bullish), and forecaster jumped higher, moving gold back into an uptrend. Gold remains in an uptrend in all 3 timeframes. 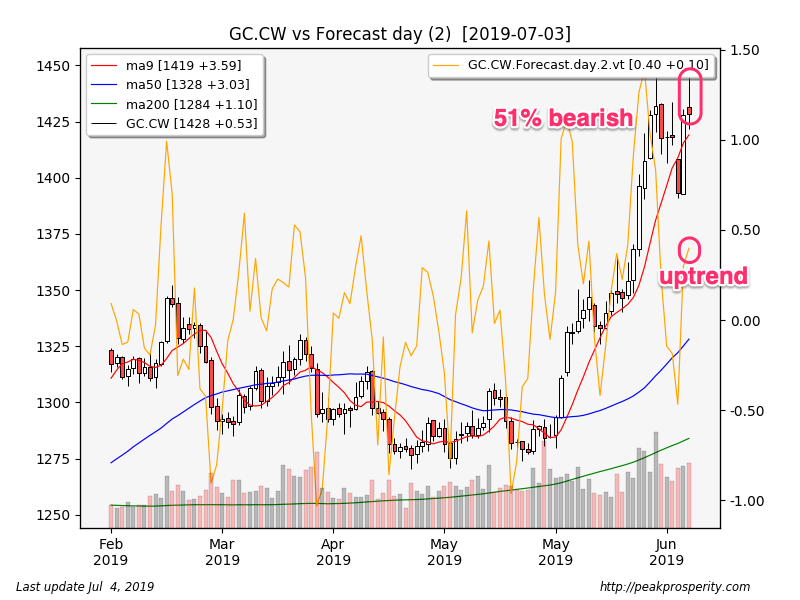 Silver followed gold higher in Asia but silver’s rally was much less intense; silver topped out at 15.51, and then slowly moved lower through end of day. Weekly forecaster tipped over into a slight downtrend; this leaves silver in an uptrend in the daily and monthly timeframes. 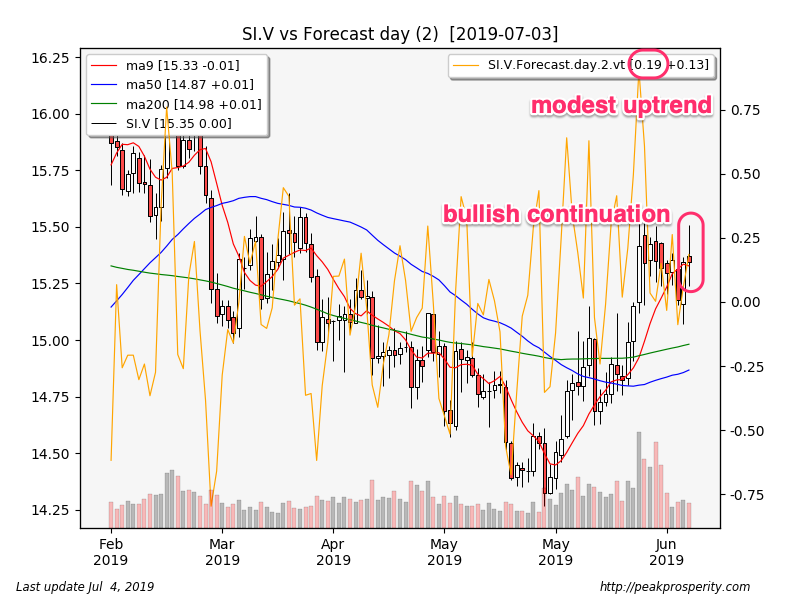 The miners fell in the morning, but then buyers showed up and pulled prices back to even by the close. GDX rose +0.39% on light volume, and GDXJ was unchanged on moderately light volume. XAU rose +0.24%, the spinning top candle was a bullish continuation, and forecaster inched lower but remains in a mild uptrend. XAU remains in an uptrend in all 3 timeframes. 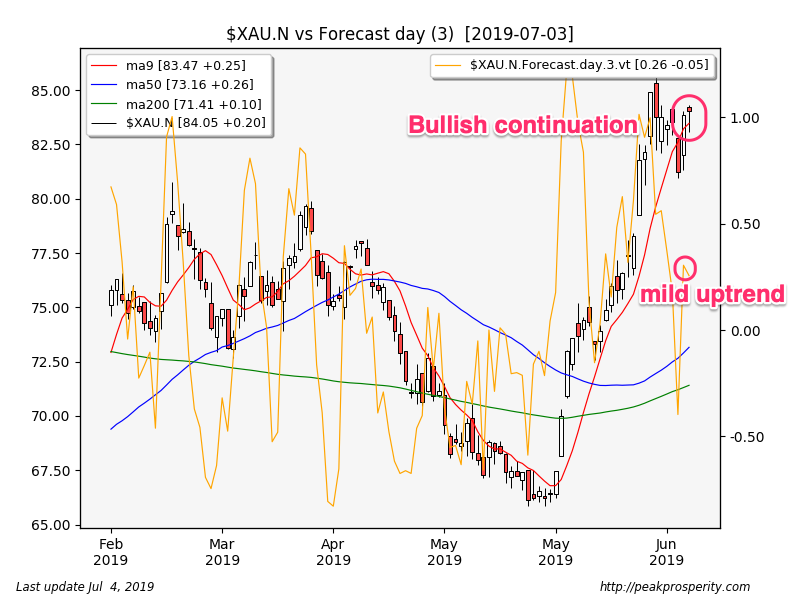 The buck rose +0.05 [+0.05%] to 96.23. The spinning top candle was a bullish continuation, and forecaster moved higher into a moderate uptrend. The buck remains in a downtrend in both weekly and monthly timeframes.

Crude moved higher, up +1.11 [+1.97%] to 57.51. While the EIA report was a bit disappointing (crude: -1.1m, gasoline: -1.6m, distillates: +1.4m) compared with the much stronger API report yesterday, the initial sell-off didn’t last long, and crude ended the day at the highs. The bullish harami was actually bullish (43%), and forecaster moved higher, but remains in a moderately strong downtrend. Crude remains in an uptrend in both weekly and monthly timeframes.

SPX rose +22.81 [+0.77%] to 2995.82. This was another new all time high for SPX. The white marubozu candle was a bullish continuation, and forecaster moved higher into a strong uptrend. SPX remains in an uptrend in all 3 timeframes.

TLT rose +0.71%, which is yet another new high for TLT. It remains in an uptrend. TY rose +0.09%, the short white candle is mildly bearish (32%), and forecaster moved higher into a moderate uptrend. TY remains in an uptrend in all 3 timeframes. The 10-year yield fell -2.3 bp to 1.95%, a level last seen back in 2016. Yields have fairly convincingly cracked the 2% support level; next major support is down around 1.5%! 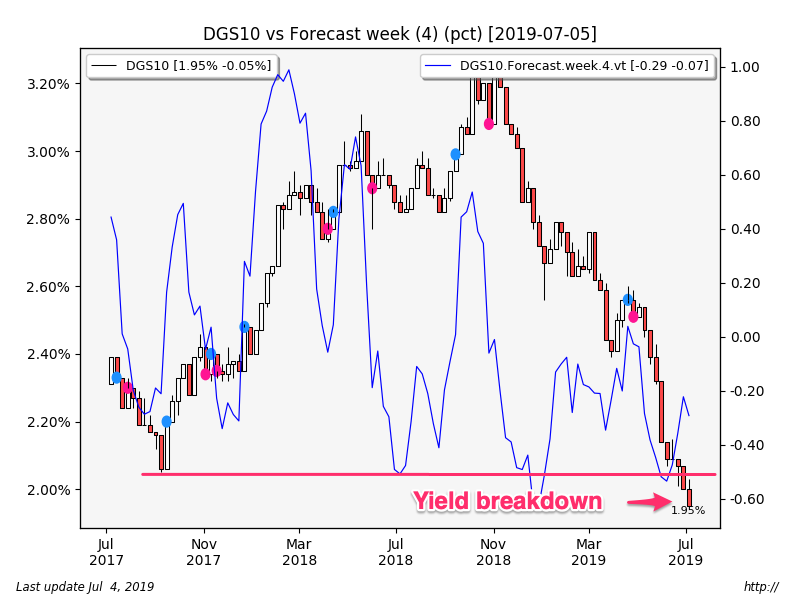 There were some mixed economic reports today:

So manufacturing continues to contract, and the skims and scams continue to do well. And by skims and scams I mean the sickcare cartel, the education cartel, and the banksters (finance & insurance). Other more legitimate services sectors include retailing, entertainment, food services & hotels, professional services, agriculture, mining, utilities, construction, and transportation & warehousing. See this website for more details: https://www.instituteforsupplymanagement.org/ISMReport/NonMfgROB.cfm?SSO=1

If services aren’t going into recession, neither is the US economy, and that’s what the ISM Non-MFG index said to us today. It is slowing a bit, but it is definitely not recessionary, and it comprises (perhaps) 80% of the US economy.

And – possibly – that explains the breakout of SPX to new all time highs.

It is curious that the 10-year yield plunged to a new 2-year low on the same day that SPX broke out to a new all time high – with gold somewhere in the middle. I think the ongoing rally in the 10-year has to do with money continuing to flee the short end of the curve: the 1-month Treasury rose sharply (+15 bp to 2.25%) over the past few weeks, as did the 3m Treasury (+9 bp to 2.21%), while the longer durations continued moving lower. The Fed Funds rate remains at 2.4%.

Bonds are predicting rate cuts & recessions, while equities – the future so bright, we have to wear shades.  Gold is on the side of bonds.

We’ll get a $40 down day today.  Very ugly action so far in metals and miners.  Hopefully, we’ll see at least a little short covering.  And hopefully, the $1360 area will provide some support.  Otherwise, this whole breakout will probably be invalidated.

This is a strong payrolls report – not recessionary at all.  Even manufacturing is growing.

“Europe’s biggest investment bank, Deutschebank, is in big trouble. This Sunday it will announce a major restructuring. It’s also a harbinger of a bigger problem with European banks in general, which are loaded with trillions of euros in non-performing bank loans they haven’t been able to shed since the crisis of 2008-10 (and subsequent Eurozone double dip recession of 2011-13).

Deutsche, the biggest, is among the worst shape, much like the largest Italian banks. Deutsche soon will announce this Sunday, according to reports, a 20,000 cut in jobs, as well as asset sales of entire divisions, as it pulls out of the US and other economies and consolidates back to Germany. (It formerly tried to challenge US investment bank giants, Goldman Sachs and Morgan Stanley, by acquiring the large US bank, Bankers Trust, several years ago but has now clearly lost out in that competition and is trying merely to survive.) …”

Is Deutsche Bank the Next ‘Lehman Brothers’?

I’m definitely impressed that the PM space didn’t completely fall apart today.  Miners were bought pretty much all day, and gold closed down, but well off the lows.  Still some buying pressure, it seems.  Would have been nice to close over $1400, though.

Half the job gains were Birth/Death Model Guesstimates.   Small Biz has been shedding material jobs for two months.   That’s a leading indicator.

Do you have a name for the “small business, materials” jobs series?  I don’t see it.  Perhaps it has another name? 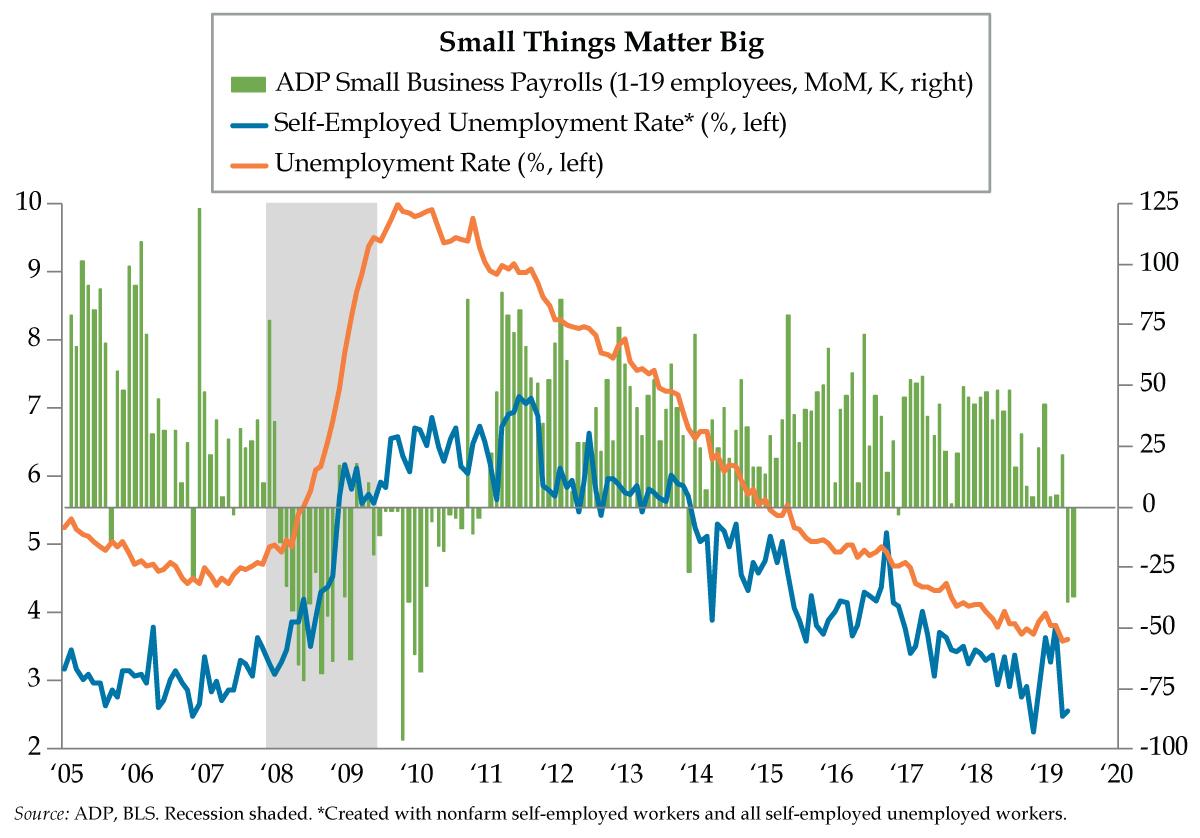 Thanks for the chart.  Always helpful to see the context.

First, while the ADP series only goes back to 2002, its a great sanity check for our friends at the BLS that might be tempted to wang the numbers around for one reason or another.  (Although – since most gov’t workers are Dems, they most likely have little fondness for their current boss Trump…one wonders how much wanging-around is happening right now – how long would it take one of them to leak the story to the “failing New York Times” if Trump wanted the numbers changed?)

I found the ADP June ADP payrolls report.  It shows “Total Nonfarm” as 102k, vs BLS of 224k.  It isn’t a disaster, but neither is it great news.   This suggests the BLS has overdone it for June.  We also see strong mid-sized and large biz employment vs continued shrinkage in small biz.  Perhaps that’s an unintended consequence of the fed low rate policy.  The ADP number is, however, an improvement over ADP’s May number of 27k.

ADP has  a pretty nice webpage.  It shows us where growth (and shrinkage) really is.  “Education & sickcare cartels” are our “growth industries.”  Big surprise.

Third, the ADP small biz payrolls isn’t a leading indicator – it doesn’t tell us we are going into recession, it tells us if we are already in one.  That’s a “coincident indicator” rather than a “leading” one.  I conclude this from looking at the chart you supplied.

The “working part time/economic reasons” series from BLS is more of a leading indicator – it moves higher just before recessions start, and it has a much longer history.  Right now, it isn’t moving higher.