Gold was unchanged at 1224.50 on heavy volume, while silver rose +0.10 [+0.62%] to 15.48 on moderate volume. The buck dropped -0.06%, a minor move; currency did influence price, but mostly the rally in silver was driven by a large rally in copper, which rose +2.24%, printing a swing low. What happened with copper? China announced they were going to increase infrastructure spending. Basically it seemed to be stimulus from the Chinese government that drove the recovery in copper prices today.

Gold mostly just moved sideways; lower in Asia, higher in London, and then back down to even in the US. It roughly tracked the Euro. Candle print was a bearish harami (actually a bullish continuation), while gold forecaster jumped +0.21 to +0.06, which is a buy signal (at long last!) for gold. While the forecaster is mildly enthusiastic, I think gold needs to close above the 9 MA to get the ball rolling uphill. 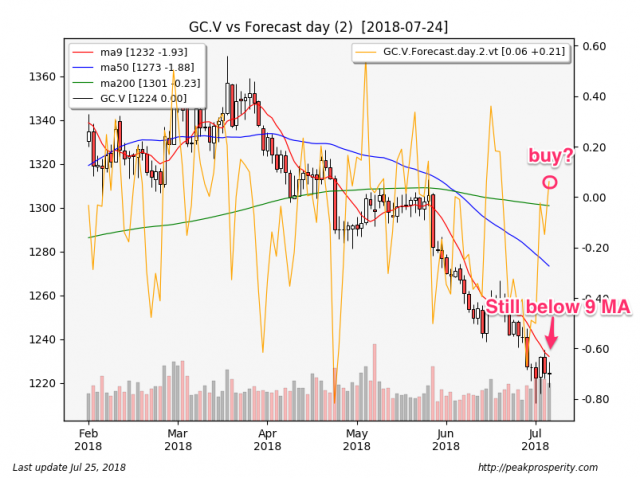 Silver tracked copper, making a new high to 15.63 before falling back into the close. The spinning top candle was mildly bullish, and silver forecaster edged up +0.02 to -0.13. That’s still not a buy signal for silver. Silver needs to close above 15.60 in order to print a swing low – which gold did 3 days ago. One bit of good news though: silver’s weekly forecaster is looking quite bullish; if prices move just a little bit higher, we should see a buy signal from the weekly. 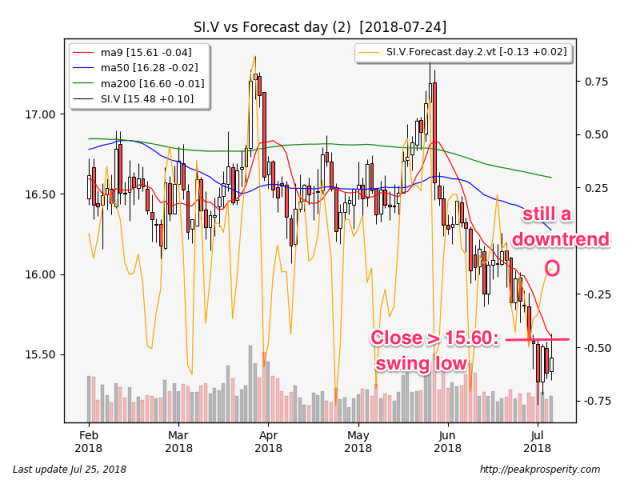 Miners rallied today, with GDX up +1.36% on very heavy volume, while GDXJ climbed +1.10% on moderate volume. XAU printed a bearish harami candle, which had a 37% chance of being a bullish reversal. That’s not bad for a harami. Forecaster ticked up +0.09 to -0.19; still a downtrend for the miners. XAU remains in a downtrend in all 3 timeframes. 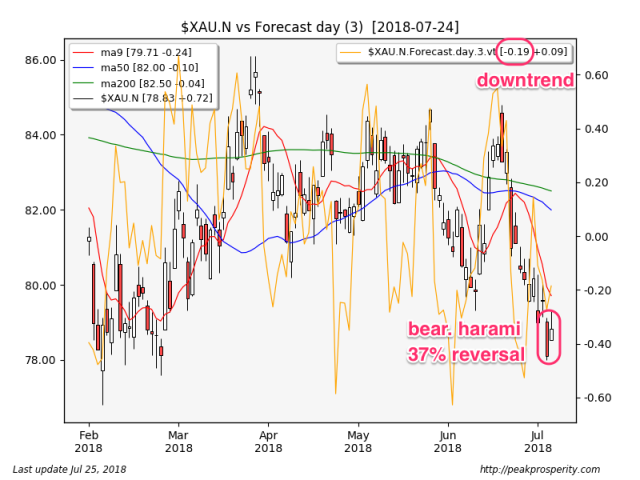 Platinum rose +0.18%, palladium inched up +0.02%, while copper jumped +2.24%. Copper printed a swing low today; forecasters for all 3 other metals are pointing up strongly. It looks as though China has decided to fight the tariff war indirectly: government-sponsored infrastructure spending as well as weakening its currency. Move, and counter-move.  Meanwhile, we see copper’s recovery – swing low, strong uptrend, back above the 9 MA.  Its almost as if someone knew a few days ago that China would announce the infrastructure plan.  Hmmmmm.  This is why I say its a good idea to watch prices, because they sometimes show the moves of the well-connected players prior to the news hitting the wires.  Which of course we don’t have wires anymore, but the point I believe is still valid. 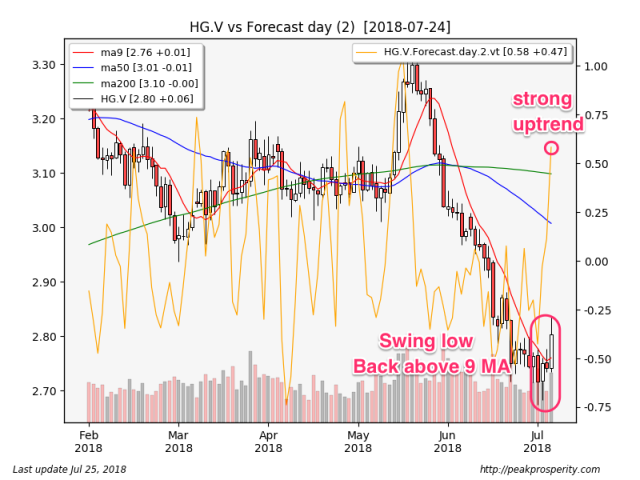 The buck fell -0.06 [-0.06%] to 94.25. Really not much happened – the buck moved sideways in a narrow trading range. Still, it was enough to send the forecaster strongly lower; the buck has flipped back to a downtrend. DX weekly is also going to issue a sell signal, if prices close at these levels by end of week. That bodes well for the metals recovery.

Crude rose +0.96 [+1.42%] to 68.76, moving higher along with the metals – perhaps influenced by China’s infrastructure spending spree. A positive API report after market close (crude: -3.1m, gasoline: -4.9m, distillates: -1.3m) pushed prices up 20 cents at end of day. Crude’s move today moved it back above the 9 MA, which is a bullish sign. Crude is in a very mild uptrend on the daily, a downtrend on the weekly, and an uptrend on the monthly. I’m betting the monthly will dominate.

TLT rose +0.34%, clawing back a small portion of the losses sustained over the last few days. The bullish harami candle print wasn’t actually bullish. TLT forecaster remains in a strong downtrend. TY confirms the bearish view, rising just +0.01%, printing a doji/bearish continuation, and TY forecaster moved deeper into downtrend. Why is a +0.01% move bearish? Probably because it is a dead cat bounce after two days of strong selling. TY is below all 3 moving averages, and is in a downtrend in both daily and weekly timeframes. The 10-year yield fell -1.6 bp to 2.95%.

Copper just confirmed its rally from last Friday.  Of course, news can still dominate – and as we move closer to the implementation date of the tariffs on $200 billion in Chinese goods with no negotiations occurring, I’m guessing that will weigh on prices.  Still, the buck looks to be weakening, and copper has printed its swing low, so we could see a fairly brisk short-covering rally.

And for those of you that focus on the master resource – crude – I think we’ll probably see higher prices ahead, barring any unpleasant short-term effects from tomorrow’s EIA report, if it happens to come in more bearish than the relatively positive API report from today.