Gold fell in Asia, rallied into the US open, and then fell for the remainder of the day. Was this a currency issue? Certainly gold’s plunge roughly equals the dollar’s rise, but intraday the moves didn’t match up all that well – in other words, gold’s drop today probably wasn’t driven by currency moves. The long black candle was a bearish continuation, and forecaster dropped into a relatively strong downtrend. Gold remains in a strong uptrend in the weekly and monthly timeframes.  Gold ended the day below its 9 MA.

COMEX GC open interest fell -12,151 contracts. That could be related to the August contract approaching first notice day (31 July) – lots of funny things happen on or near expiration. 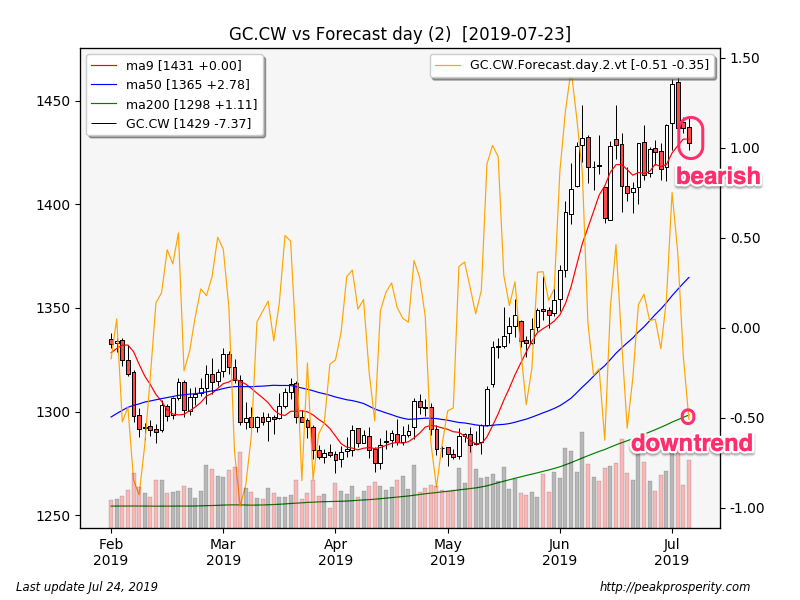 Silver was hit fairly hard early in Asia, but then bounced back even harder – trough to peak was more than 35 cents off the lows. The high wave candle was bearish (46%) and forecaster fell, entering a downtrend. In spite of the daily fuss, silver remains in a strong uptrend in the weekly and monthly timeframes.

The gold/silver ratio dropped -0.71 to 86.74. This was another day of silver strongly outperforming gold. The plunge in the gold/silver ratio is starting to become a real thing. Are people selling gold and buying silver? Perhaps. Maybe they are unwinding a long gold/short silver trade.  Or maybe some people want to open a PM position, and they’ve noticed that silver is the really cheap option that has yet to break out.  Gold is at 6 year highs, while silver…it is just not even close. 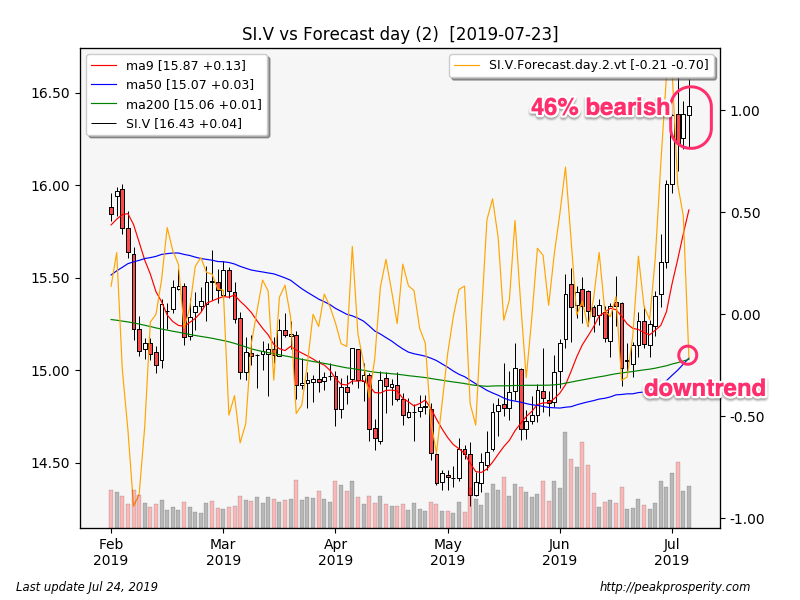 The miners rallied in the first 30 minutes of trading, then sold off hard until about 11 am. GDX dropped -1.14% on moderate volume, and GDXJ dropped -1.61% on moderate volume also. XAU lost -0.80%, the spinning top candle was somewhat bearish (40%), and forecaster fell hard, but remains in an uptrend. XAU remains in an uptrend in all 3 timeframes. 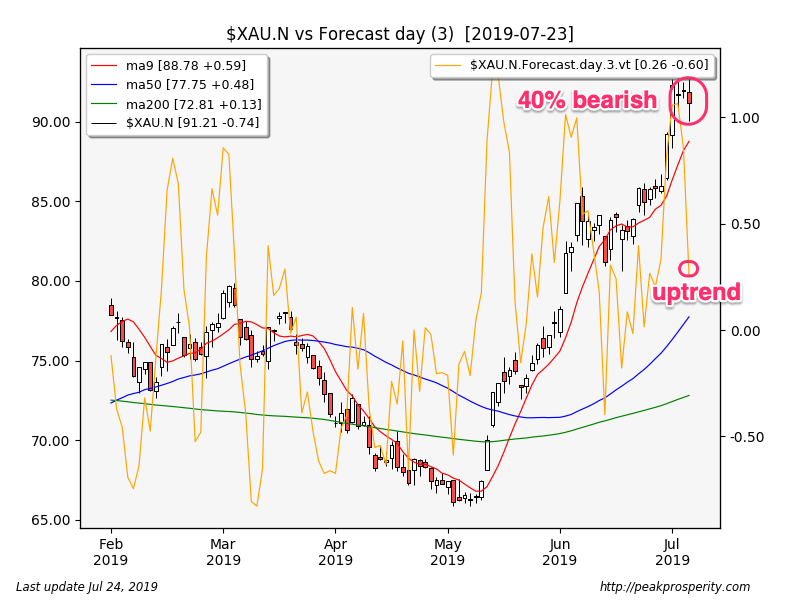 The buck rose +0.47 [+0.49%] to 97.22. The buck rallied steadily all day long, from the open to the close. The opening white marubozu was a bullish continuation, and forecaster jumped higher into a strong uptrend. The buck broke out above two previous highs today, which is bullish. DX is in an uptrend in both daily and weekly timeframes, and the monthly remains right on the edge of a trend change also. 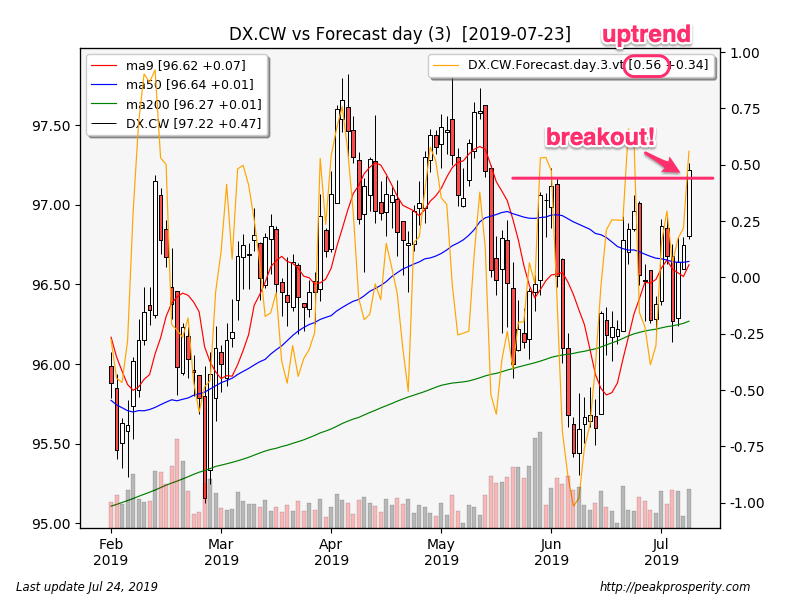 Crude rose +0.97 [+1.72%] to 57.23. All of the gains in crude came in the afternoon in the US. The long white candle was somewhat bearish (42%) but forecaster jumped higher into an uptrend. Crude is now in a uptrend in both daily and monthly timeframes.

SPX climbed +20.44 [+0.68%] to 3005.47. The long white candle was somewhat bearish (44%) but forecaster jumped back into an uptrend. Today’s rally also caused the weekly to move back (slightly) into an uptrend, putting SPX back into an uptrend in all 3 timeframes. SPX ended the day back above all 3 moving averages too.

TLT fell -0.55%, printing a swing high (surprisingly, not bearish), but forecaster fell just enough to edge into a downtrend. TY fell also, dropping -0.17%, the short black candle was a bearish continuation, and forecaster moved into a downtrend. Could this be a lower high for bonds? TY remains in an uptrend in both weekly and monthly timeframes. The 10-year yield rose +3.1 bp to 2.07%.

JNK rose +0.18%, the forecaster moved higher into an uptrend, supporting the risk on mood in equities.

+0.33%, a large move higher especially considering how sleepy the rest of the market was today. JNK is now back in an uptrend. The BAA.AAA differential fell -1 bp to 99 bp, and the trend is pointing lower more emphatically now. It is not suggesting any sort of wider credit concern at the moment.

Gold and silver actually did fairly well today, given the strong rally in the buck.  As we head towards FOMC, it looks as though the market is starting to figure out that the Fed isn’t going to go nuts on rate increases.  If this is true and the buck continues to rally (and maybe even breaks out to new highs), this will put a bit of pressure on PM.  Even though prices are holding up fairly well, the recent move has been fairly sharp, and it is entirely possible there will be some selling prior to FOMC either end of this week, or the beginning of the next, especially if the buck continues moving higher.

Today’s dollar rally was all about the plunge in the Euro.  I don’t know why the Euro plunged, but it did – falling all day long.  And we can guess how gold looks across the pond – it looks a lot better than it does here in the US.   Forecaster remains in an uptrend, and price remains above the 9 MA.  So even though currency didn’t specifically cause today’s sell-off, the outlook for gold independent of the currency effects remains in a reasonably strong uptrend.  And – who knows – it might just be those Europeans buying gold hand over fist. 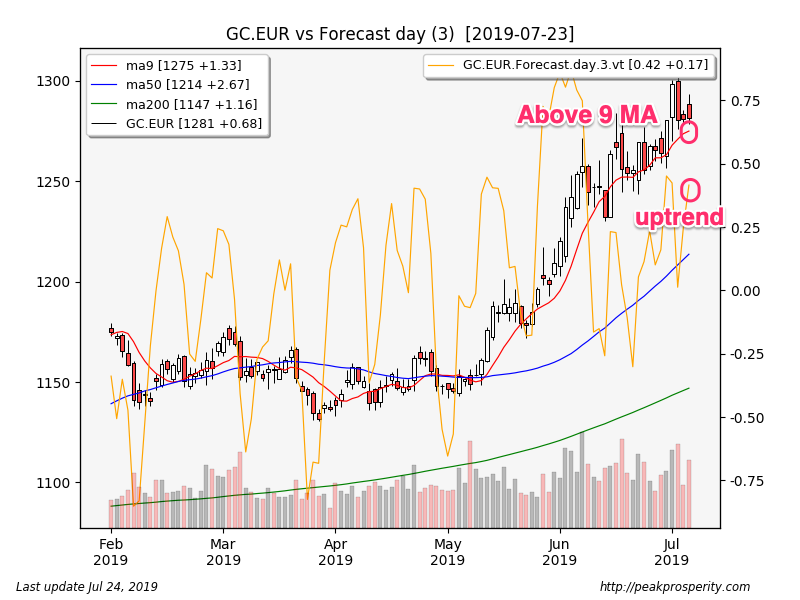 COMEX GC open interest fell -12,151 contracts. That could be related to the August contract approaching first notice day (31 July) – lots of funny things happen on or near expiration.

I have noticed over recent expiration of contracts that the price is particularly volatile with the trend to the downside until the final day when there has been a burst to the upside.  If my recollection is correct,  I will not be surprised to see gold price being pushed down today and tomorrow with an upcorrection on Friday. (Now that I put this down on paper, the pattern this contract expiry will be different!)

Have you noticed that Gold has actually a bullish posture vs all over the world currencies ??? The very last standing is Buck !!!

Thanks as usual for your thougt !!!

I agree with this.  Probably will see gold drop back into the mid teens by evening.  Looks like the mid-morning selloff is starting.