Gold just chopped sideways in a narrow range. The short black/NR7 candle was unrated, but forecaster was not happy, dropping hard and falling into a downtrend. Even so, gold remains in a strong uptrend in the weekly and monthly timeframes. 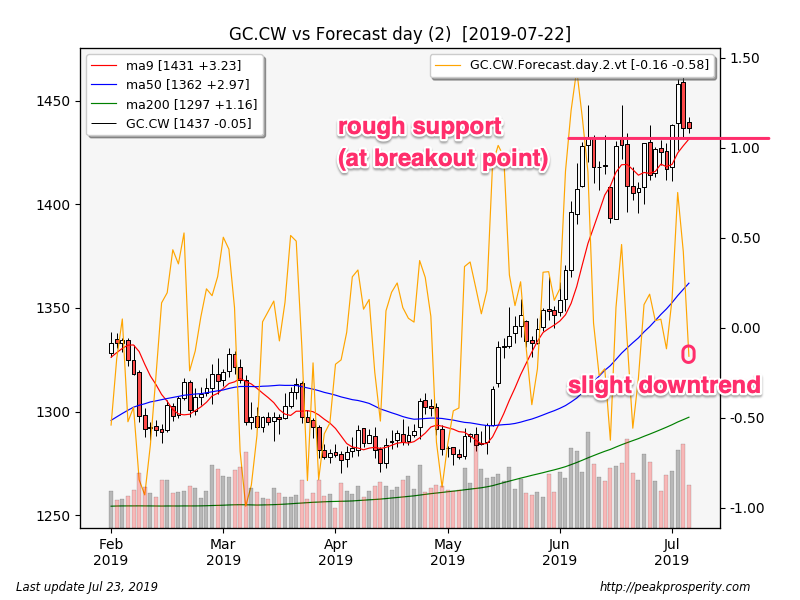 Silver moved sharply higher 3 hours into the Asia session, tried to rally further, but ran into selling in late US trading. The long white candle was unrated, and forecaster moved lower but remains in a reasonably strong uptrend. Silver remains in an uptrend in all 3 timeframes.

The gold/silver ratio dropped -0.86 to 87.45. Silver continues to outperform. 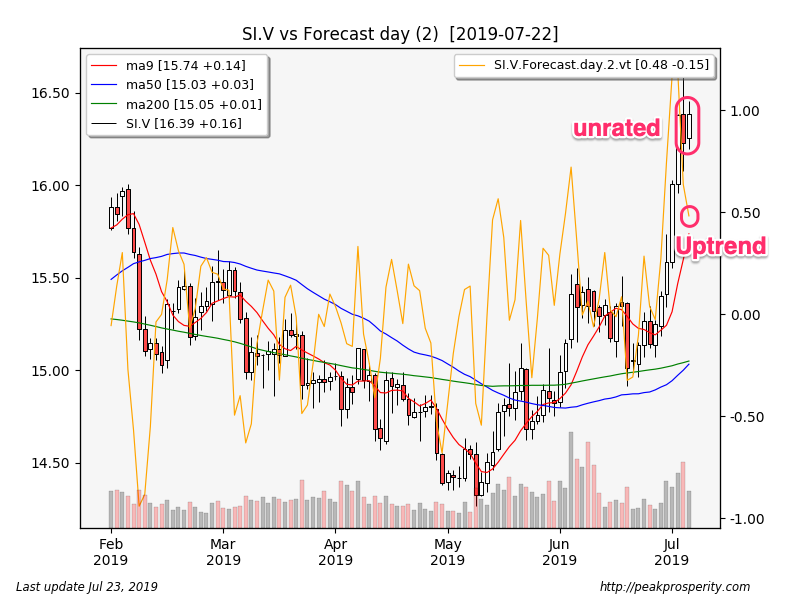 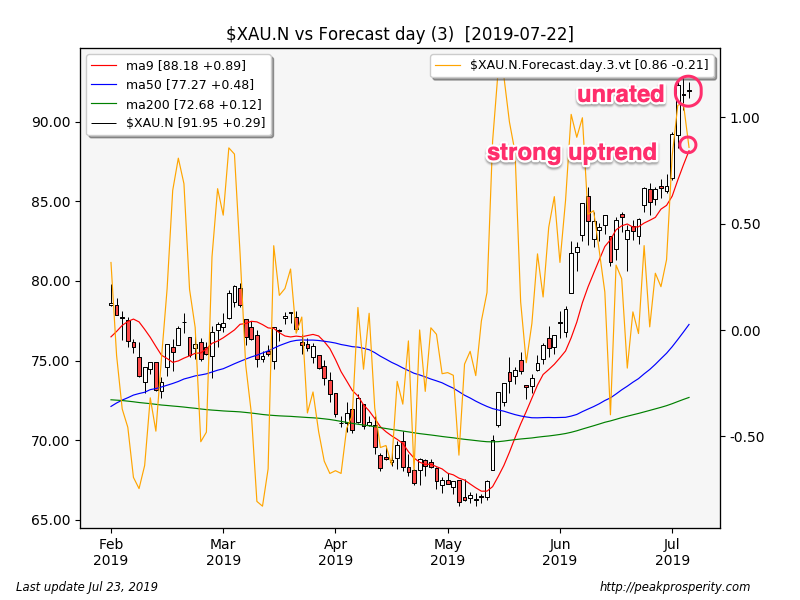 Platinum rose +0.28%, palladium climbed +1.54%, and copper moved down -0.82%. Both copper and platinum remain in uptrends, while palladium is still in a short-term downtrend, having moved off its highs.

The buck rose +0.11 [+0.11%] to 96.75. The short white candle was unrated, and forecaster moved slightly higher, remaining in a mild uptrend. The buck is in an uptrend in both daily and weekly timeframe, and the monthly is right on the edge of an uptrend also.

Crude rose +0.35 [+0.63%] to 56.26. Crude gapped up at the open, and then chopped sideways for the rest of the day. The doji candle was mildly bearish 36%, and forecaster moved higher but remains in a slight downtrend. Crude remains in a downtrend in both daily and weekly timeframes.

SPX rose +8.42 [+0.28%] to 2985.03. The spinning top candle was unrated, and forecaster moved higher but remains in a slight downtrend. The weekly forecaster also fell, enough to edge into a slight downtrend also. That puts SPX in a downtrend in both daily and weekly timeframes, although the downtrend right now is really very minor.

JNK jumped +0.33%, a large move higher especially considering how sleepy the rest of the market was today. JNK is now back in an uptrend. The BAA.AAA differential remains at 100 bp. It is not suggesting any sort of wider credit concern at the moment.

CRB fell -0.02%, with 2 of 5 sectors falling, led by industrial metals (-1.41%). That is a swing high for industrial metals, which have actually done fairly well over the last 2 months. PM remains the strongest commodity group by far.

If you get the sense that nothing happened, you’d be right.

Silver continues to perform well – surprisingly well – managing to move higher even after a strong rally over the past few weeks. The miners too continue to feel upward pressure. They are also quite close to the highs (XAU RSI-7=82), but I get the feeling that there are buyers lurking in the shadows ready to buy every dip.

Sometimes when there is a lot of buying interest, there are no big corrections.  There are just pauses in the uptrend.  That might be where we are right now.

I listened to a KWN guest this weekend – Bill Fleckenstein.  He has been around forever.  He said something I thought was particularly salient, which reminded me of something I once read, credited to the old trader Jesse Livermore.  Fleckenstein said that after crossing 1380 (or 1400), the trend has changed, and that we are now in a bull market for gold. The strategies that worked during the 2013-2018 period are not correct for the new period we are in.  The biggest danger: “getting too cute” (meaning, trading in and out of gold and the miners)

In this, Fleckenstein echoed Livermore, who said:

“After spending many years in Wall Street and after making and losing millions of dollars I want to tell you this:  It never was my thinking that made the big money for me. It always was my sitting. Got that? My sitting tight!”

“Men who can both be right and sit tight are uncommon. I found it one of the hardest things to learn. But it is only after a stock operator has firmly grasped this that he can make big money.”

Per recent article by financier Jim Rickards, he states that the central banks around the world are asking for their gold back from the US and the bank of England. He says they are becoming aware that they cannot trust the United States or England with their gold in case there is a crisis and feel they will not return their gold to them. He also states that this is causing a problem in the derivatives Market as they have to have a certain amount of gold on hand in order to do their Market manipulations and schemes. He feels that they now have less gold for their manipulations and is also a likely cause for the recent rise in the gold price.