Gold drifted lower in Asia and London, but then started to rally around 10 am in New York, and the rally didn’t stop until about 3:45 pm. The long white candle was a bullish continuation, and forecaster jumped higher into a strong uptrend. Gold made a new 6-year high, as well as a new closing high. Gold is in a strong uptrend  in all 3 timeframes. 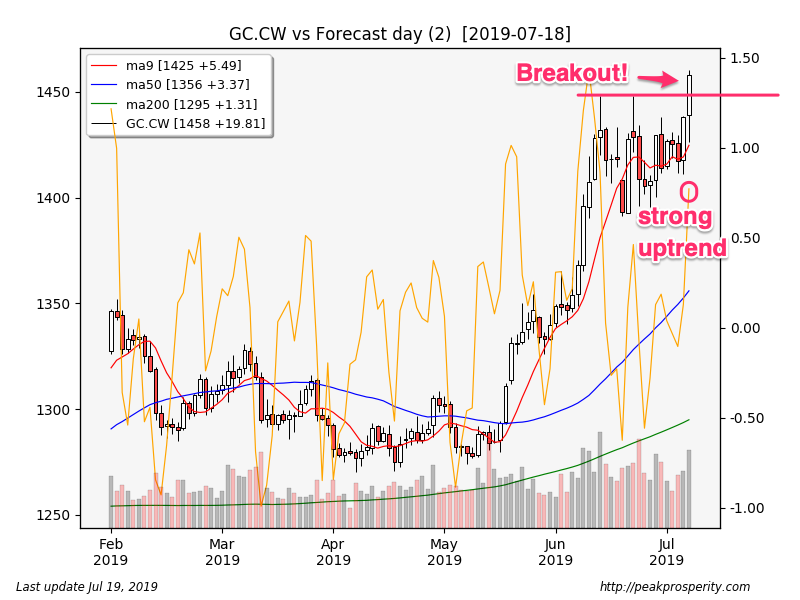 Silver moved slowly higher in Asia and London, with the rally accelerating after 11 am in the US, eventually closing at the highs. The closing white marubozu was mildly bearish (39%), and forecaster was little changed, remaining in a very strong uptrend. Today was a new high, and a breakout above the previous high at 16.20. Silver is in a strong uptrend in all 3 timeframes.

COMEX SI open interest fell -840 contracts. Look at that – some short-covering. At last.  Check out the difference between gold and silver.  In silver, the shorts are covering.  In gold, they are loading up.  Perhaps official intervention?

The gold/silver ratio dropped -0.87 to 88.80. The plunge from the 27-year highs in the ratio continues, and remains bullish.

I had to change the timescale for silver daily chart today – to show the breakout.  This more than anything should give you a sense of the rally.  Just two weeks ago silver was languishing at 15…remember that? 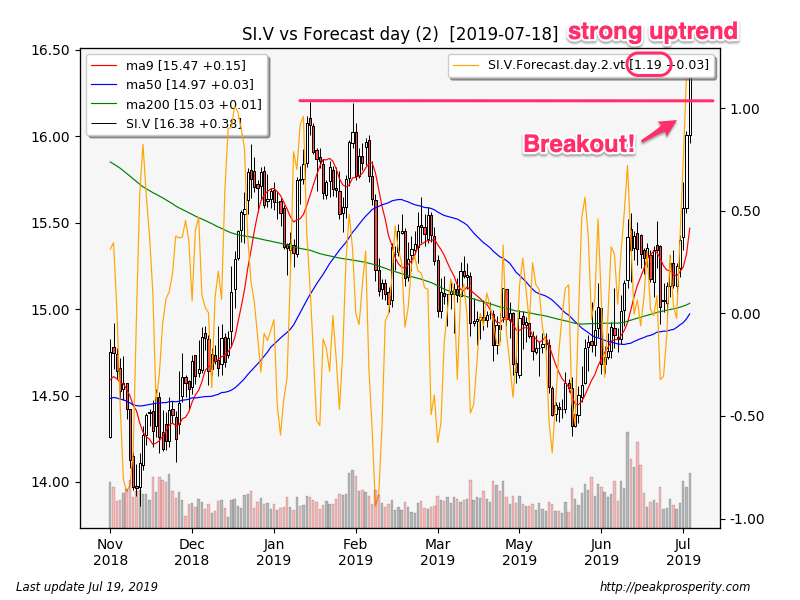 The miners sold off a bit at the open, then rallied strongly for the rest of the day, closing at the highs. This was another extremely good day for the miners. GDX jumped +4.28% on extremely heavy volume, and GDXJ shot up +5.92% on extremely heavy volume also. XAU lagged, rising just +3.41%. The long white candle was bearish (57%), but forecaster moved higher, into a very strong uptrend. XAU is approaching a previous high set back in early 2018. XAU is in a strong uptrend in all 3 timeframes.

Today I need a weekly chart to show context – it’s a chart with weekly candles, but using the daily forecaster.  You can see that XAU has broken above 2 previous highs, and is now right up against a third.  XAU is up 40% over the past 3 months.  Its pretty clear that “someone” decided to start buying the mining shares a few months ago – long before the more recent rally in silver.  The miners were the “tell”, I think. 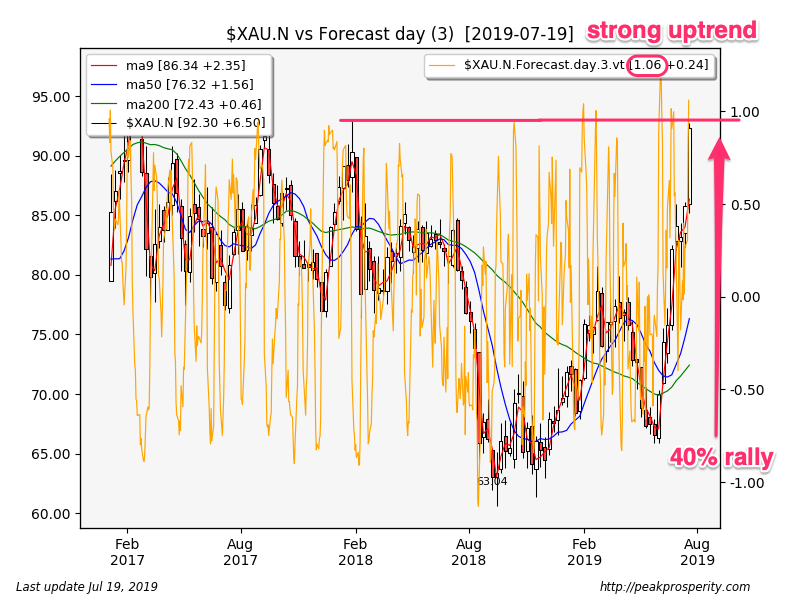 The buck continued falling, losing -0.41 [-0.42%] to 96.27. The drop started at roughly 1:40 pm in New York, which seemed to align with the second phase of gold’s afternoon rally and eventual breakout. The swing high pattern was bearish (42%) and forecaster fell, and is now showing a neutral reading. The buck is now below both the 9 and 50 MA lines. The buck is in a downtrend in the monthly timeframe, but is still in an uptrend in the weekly.  The falling dollar in the afternoon seemed to assist gold in breaking out to new highs.

Crude fell again today, dropping -0.95 [-1.67%] to 55.78. The long black candle was bullish (+44%), and forecaster inched higher, but remains in a reasonably strong downtrend. Today’s sell-off was initially quite a bit stronger, but crude bounced back in the afternoon after reports came out about a US warship shooting down an Iranian drone, as well as a report that Iran seized a Panamanian-flagged (but UAE-owned) oil tanker. Crude remains in a downtrend in both daily and weekly timeframes.

I’ve often wondered – why doesn’t the US just protect US-flagged vessels?  If you want to go offshore to register in Panama, you can always appeal to the Panamanian Navy to protect them.

SPX rose +10.69 [+0.36%] to 2995.11. The piercing candle pattern was a bearish continuation, and forecaster moved lower, entering a downtrend for the first time in 3 weeks. SPX remains in an uptrend in the weekly and monthly timeframes.

JNK fell -0.02%, the takuri line print was somewhat bullish (39%), and forecaster moved higher but not enough for an uptrend. The BAA.AAA differential rose +1 bp to 100 bp. It is not suggesting any sort of wider credit concern at the moment.

That said, I have read several articles over at Wolf’s site where illiquid issues are bought in funds that promise daily liquidity – a direct result of a desperate search for yield.  Once some of these issues end up going BK, money starts moving “in anticipation of events” (c.f. Martin Armstrong), a trickle of redemptions become a flood, and pretty soon the fund manager shuts down redemptions entirely.

Given the historic amount of junk debt floating around today, I would strongly suggest knowing what is inside the funds you own.  Especially if that fund has a surprisingly high yield.

CRB dropped -1.10%, with 3 of 5 sectors falling, led by energy (-2.42%). Both PM and industrial metals are looking strong, while energy appears to be breaking down.

As with yesterday, silver is once again leading gold, and the miners are leading the metal. RSI values are starting to get inflated: silver’s RSI-7 is at 86, and XAU’s RSI is 87. Gold’s RSI is still relatively low, at 72. I’m guessing we may have a couple more days left before we start to correct. Rising rate cut chances are – perhaps – the driver, although a rally tends to suck in new people just on momentum and excitement. FOMO is not just for bitcoin.  Anyone who remembers 2011 knows this.

Even after the big recent rally, silver remains dreadfully under-priced relative to gold. The gold/silver ratio chart – quarterly, dating back to 1975 – shows just how elevated the ratio became. It is just now starting to reverse. It is impossible to predict if the move we are seeing right now is the start of “the” move, or simply “a” move for PM, but silver at GSR 89 remains a good deal – although buying today at silver’s RSI 86 is probably not the best idea. Betting on silver to “return to fair value” for the ratio (say 65) suggests roughly a 35% return on a hypothetical “short gold/long silver” trade.  I know the silverbugs think the “correct” ratio for the GSR is around 10, but that’s not what the market tells us to expect. 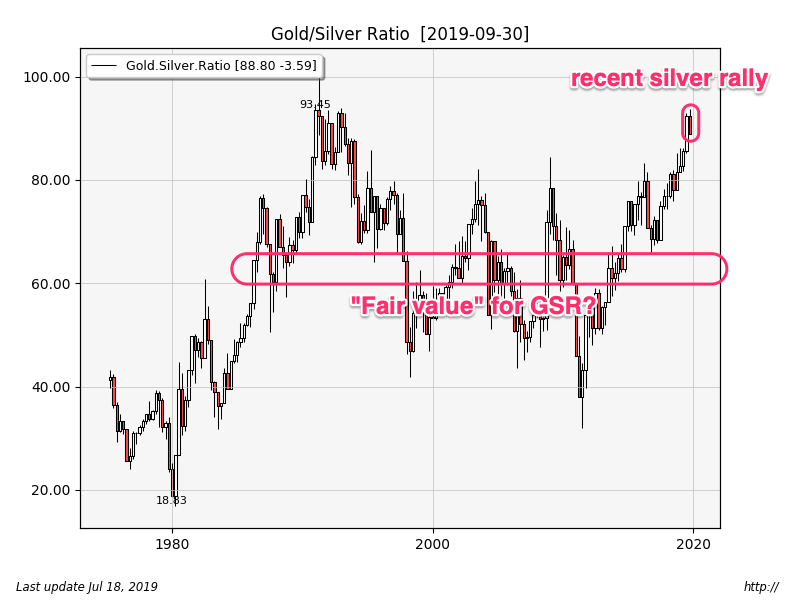 In the near term, I’m just guessing that, after the convincing silver breakout above 16.20, the banksters will want to terrify the silver shorts for a bit longer, until enough of them have covered, and then we’ll see a correction.  Both moves could be pretty dramatic.  When silver starts to move, it does not move in a calm, quiet manner.  It is a small market, and when big money starts to play, prices tend to move quite violently – in both directions.

The FOMC meeting is coming 12 days from now, or 9 more trading days. I don’t think the FOMC will live up to the most optimistic projections (a 50 bp cut!) but I think 25 bp is baked into the cake. The risk of course is that the Fed decides to say something a bit less dovish than “3 rate cuts by December.”

Can thousands of shorts just be added every day while the price continues to rise without ever having to be covered?  You hear about short covering rallies in every other market, but you never hear about it in gold.  The price rises and shorts pile in and pile in and you never get a strong short covering rally and see OI drop.  It only ever happens during a price decline.

Also, does every day that you get a price rise result in a bearish candle print?  Seems like the daily prints are usually bearish when the price accelerates.

Lastly, today is Friday.  Seems like a great day to drop prices, especially since we’ve had such a strong week.  Wonder what news is going to come out st 8:30 to begin the decline in earnest?

Lastly, today is Friday.  Seems like a great day to drop prices, especially since we’ve had such a strong week.  Wonder what news is going to come out st 8:30 to begin the decline in earnest?

If you watch gold trading for any length of time you notice it does not trade the same as equities.  When the precious stocks are bought in the overnight futures “”markets”” they open up to those levels and then stay there for a while.

Conversely, if equity futures are down, the cash open tends to be bought, almost with a level approaching panic buying.

Gold, conversely, does pretty much the opposite it seems.

Last night there were at least 5 serious attempts to slam gold.

The surprising result?  They really didn’t work all that well.

Those are very large trading volumes for the overnight session, usually the bars are too low to even be seen on a chart this size.  Last night, multiple times, the volumes approached normal daylight trading volumes.

If I were short gold here, I would not consider that especially encouraging.

Just FYI, the candle print data is trained on a selection of lots of different price prints – much of them from the equity market.  Basically, it makes the assumption that prices are prices, and patterns are patterns, with the hope that things work relatively similarly across all asset classes.

It knows about resistance and support levels, moving averages, RSI values, and whatnot.  It tries to see (approximately) what “price” has done next after printing a particular candle pattern in that environment.  Historically.

The gold market might behave differently.  So take the prints with a grain of salt.

The commercial shorts appear to be “strong hands” – they couldbe caused by miners that decide to put on production hedges when price rises (and they get slowly worked off as gold gets produced and the miners deliver against those hedges) – certainly we know that happens in oil – or it might just be banksters that know gold is cyclical, and they’re willing to take the short-term pain because they know price will eventually correct.  (Except during 2011 when it didn’t).  Or of course it might be official intervention.  Certainly we saw that during BRExit, but who knows how often it happens under other circumstances.

The managed money shorts are not strong hands at all.  They bail out during rallies.

I agree with Chris about the assaults earlier today.  Someone is pounding gold pretty hard.  It probably helps that the buck is moving higher at the same time. 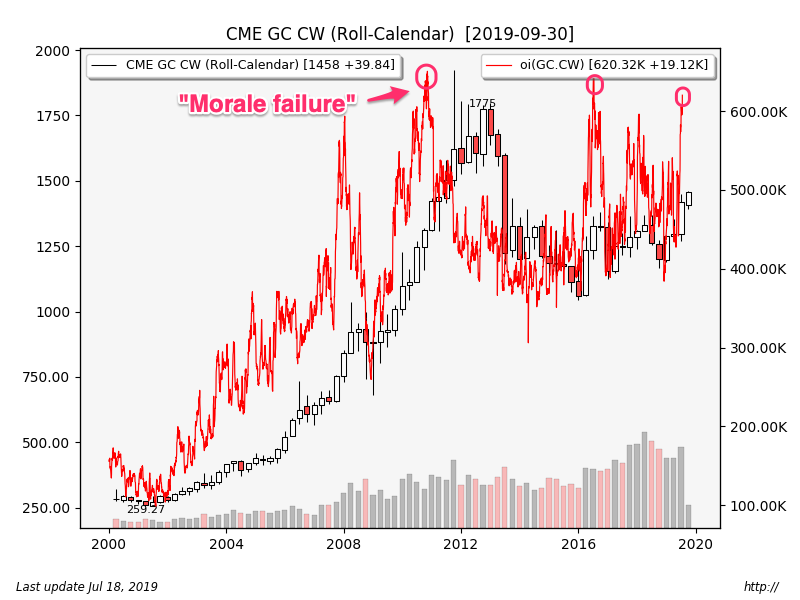 So if the mining shares tend to lead, GDX is off just 1% so far.  This could be telling us that gold’s $25 plunge may be a bit overdone.  GDXJ is also outperforming GDX, which is another positive sign.

It depends on how they close, of course, but so far, the miners are holding up well.

Thanks for the good info, guys.  Makes a lot of sense.