Gold moved moved lower in London, taking a brief dip to 1401, and then the day’s big rally started, with gold rising some $25 in 7 hours, eventually closing at the day high. The closing black marubozu was a bullish continuation, and forecaster moved into an uptrend. Today was the highest closing high for gold in the last 6 years. Gold is back in an uptrend in all 3 timeframes.  Don’t let the modest uptrend on the daily fool you – the monthly trend is very strong, stronger than the rally off the 1045 lows in 2016.

COMEX GC open interest rose a big +20,385 contracts (40% of a BRExit), which is 9 days of global production in new paper. Gold still managed to close at the highs for the day.  Did I mention it was a new 6-year closing high?  I’ll mention it again: highest close in 6 years, dating back to mid-2013. 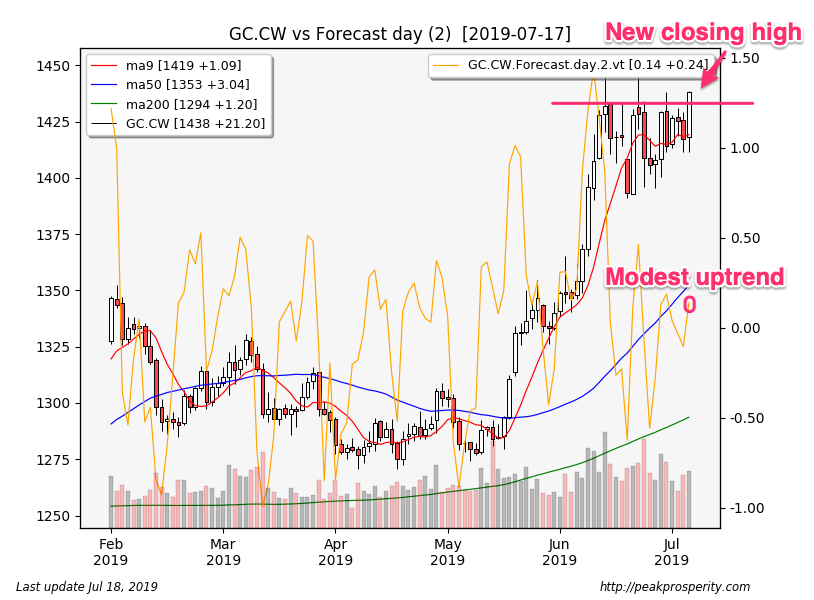 Silver moved higher in Asia, retraced a bit in London, and then climbed relentlessly for the remainder of the day. There were no large spikes, just that relentless move higher. Silver ended the day quite near the highs, with the rally finally running out of gas at round number 16. The closing white marubozu was bearish (57%), but forecaster jumped higher, and is now in a very strong uptrend. Silver remains in an uptrend in all 3 timeframes.

COMEX SI open interest rose +4,758 contracts. That’s 10 days of global production in new paper – another large increase. Did it stop silver’s rise? It did not. Silver didn’t seem to notice.

The gold/silver ratio plunged -1.05 to 89.67. The retreat from the 27-year highs in the ratio continues, and remains quite bullish.

The miners gapped up at the open, and then rallied strongly right through to the close. Miners had a very, very good day. GDX climbed +3.99% on extremely heavy volume, while GDXJ jumped +4.58% on very heavy volume. XAU rose +3.80%, the strong line candle was a bullish continuation, and forecaster jumped higher into a strong uptrend. XAU remains in an uptrend in all 3 timeframes.  The monthly uptrend for XAU is also very strong – but XAU still has quite a distance to go to make new 6-year highs.  Miners have been under-performing gold for about 8 years now, and it will take a lot of days just like this one to get the gold/XAU ratio back to 2011 levels.  Miners are a bit overbought, with RSI-7 at 82. 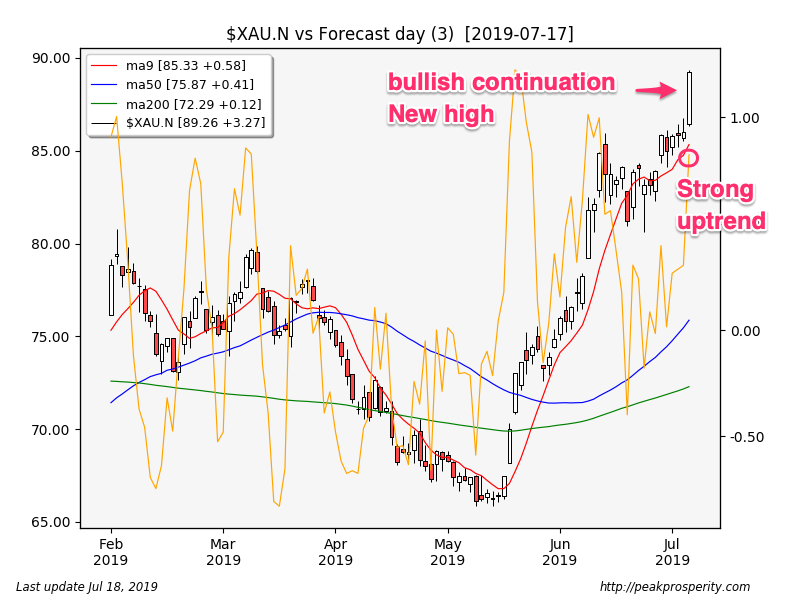 Platinum rose +0.58%, palladium climbed +0.68%, and copper moved up +0.26%. These were very mild moves compared to both gold and silver. Today wasn’t a commodity rally, it was a precious metals rally.

The buck moved lower today, losing -0.19 [-0.20%] to 96.68. The bearish harami was just a bullish continuation, and forecaster remained in a moderate uptrend. The drop was enough to pull the monthly back into a slight downtrend – it really is right on the edge right now. This leaves the buck in an uptrend in both daily and weekly timeframes.

Crude fell -0.86 [-1.49%] to 56.73. While the EIA report was mixed (crude: -3.1m, gasoline: +3.6m, distillates: +5.7m), crude initially liked the report, but it was only good for a 5 minute rally; crude then sold off for the remainder of the day. The long black candle was bullish (40%), but forecaster moved lower into a fairly strong downtrend. Crude remains in a downtrend in both daily and weekly timeframes.

Part of the “problem” with oil: Trump reportedly has signed off on Rand Paul’s proposal for the Senator to talk with Iran’s FM Zarif. This has Trump’s neocons – reportedly – furious.  (I’m reading between the lines when I say that).  Certainly, Iran isn’t showing signs of “coming to the table” with all these sanctions.  If they do this, they lose face domestically, and after almost 40 years of religious government, they probably aren’t super popular with their own people.  Maybe Trump has figured out that his neocon weasels just want to provoke Iran to attack – sanctions aren’t structured to “bring Iran to the table”, they’re just structured to piss Iran off in order to get them to start a war.  That has happened before: in August 1941, the US imposed an oil embargo on Japan, who at that time imported 80% of its oil from the US.  4 months later: Pearl Harbor, on December 7th.

SPX fell -19.62 [-0.65%] to 2984.42. Prices started falling right at the open, a rally at 11 am failed, and prices closed at the lows. The black marubozu candle was a bearish continuation, and forecaster moved lower, but remains in an uptrend. SPX ended the day below the 9 MA. SPX remains in an uptrend in all 3 timeframes.

TLT jumped +1.08%, with forecaster moving into a strong uptrend. TY rallied too, up +0.38%, the swing llow candle pattern was quite bullish (66%), and TY forecaster moved into a reasonably strong uptrend. TY remains in an uptrend in all 3 timeframes. The 10-year yield fell -6.1 bp to 2.06%.  If equities keep correcting, we could see bond yields drop below 2% once more.

JNK fell -0.04%, with the forecaster remaining in a downtrend. JNK isn’t supporting the accelerating sell-off in equities – it looks mildly bearish, but that’s about it. The BAA.AAA differential remains at 99 bp. It is not suggesting any sort of wider credit concern at the moment.

Silver is now leading gold. When I was watching intraday, gold’s ascent had stalled out at around 1425. Silver kept moving slowly higher. Eventually gold decided that it, too, needed to make a new high. This is what a “real” PM rally looks like, at least in my experience. Silver leads gold, and miners lead metal. Today, miners did best, silver second-best, with gold trailing along behind.

The next level for silver to cross is the previous high at 16.20. At that point, the remaining well-disciplined silver shorts should – theoretically – bail out of their short positions. Once the shorts are all gone, I’m guessing silver will correct. Given today’s move, it is entirely possible for this breakout to happen tomorrow. Silver’s RSI-7 is “only” at 81. There is still more room left for silver’s rally to continue.

The accelerating projections for rate cuts, as well as a move lower in the buck, both seemed to help the metals to move higher. So too is the plunge in equity prices, and the rally of the 10-year treasury.

Remember when I told you that I’ve seen silver move 50 cents in one day? Well today the move was “only” 42 cents. If the shorts start to panic, as they might on a move through 16.20, things could get really out of control. Buying at this point is a dangerous game, but so too is trying to pick the top and go short.

Notice how the rising projections for a rate cut haven’t seemed to help the equity market? Back in 2008, rate cuts didn’t help equities much either.