Retail sales came in (at 8:30 am) much higher than expected; headline number was +0.4% m/m, with the “less autos and gas” component at +0.7% m/m, a very large gain. Restaurants were especially strong, at +0.9% m/m. Someone is eating out – a lot of someones. This report was absolutely not recessionary. Will the “data driven” Fed cut rates with retail sales this good? Last month was also reasonably strong, at +0.4% m/m (headline, revised). If they do cut, it is not about data – at least not domestic data anyway.

We also had Industrial Production at 9:15 am; the headline number was bad (+0.0% m/m), but the manufacturing sub-component was reasonable at +0.4% m/m, which exceeded expectations. Autos did especially well, up +2.9% m/m, and tech was +0.7% m/m. The headline number is recessionary, but the components are not. What caused the recessionary headline number? Utilities were down -3.6% m/m, a massive decline, which could well be weather-related.

Gold moved moved sideways until that Retail Sales report hit, after which gold plunged about $5 in 5 minutes. Gold tried to bounce back, but largely failed. The confirmed bearish spinning top was bearish (57%), but forecaster moved just slightly lower, remaining in a modest downtrend. Gold remains in an uptrend in both weekly and monthly timeframes.  Gold’s drop today approximately matched the rise in the buck; gold’s move today could be chalked up to just a currency effect. 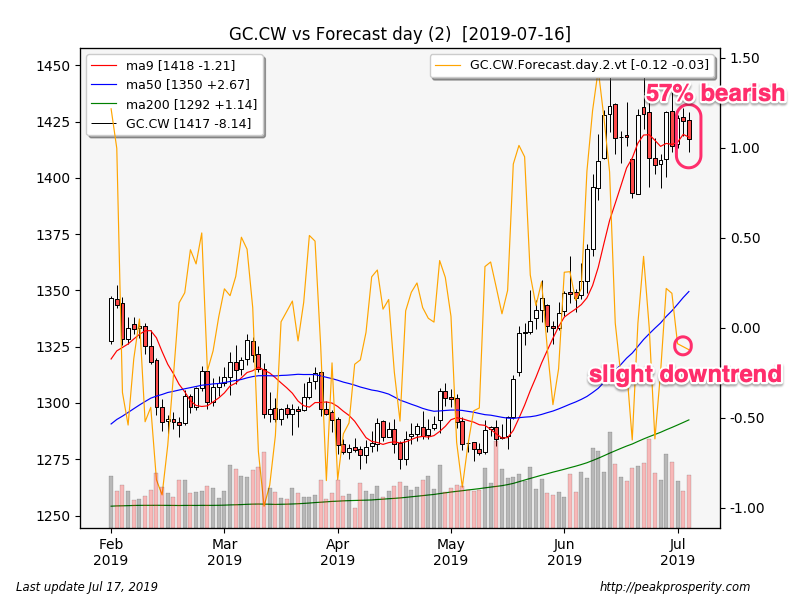 Silver chopped sideways in Asia and London, dipped briefly after Retail Sales at 8:30, and then started its rally roughly when the Industral Production numbers were released, topping out at 15.73 and then retreating into the close. The long white candle was bearish (57%) but forecaster shot higher, moving into a strong uptrend. In spite of silver’s late-day decline, it closed well above 15.50, which is my rough breakout point. Silver remains in an uptrend in all 3 timeframe. 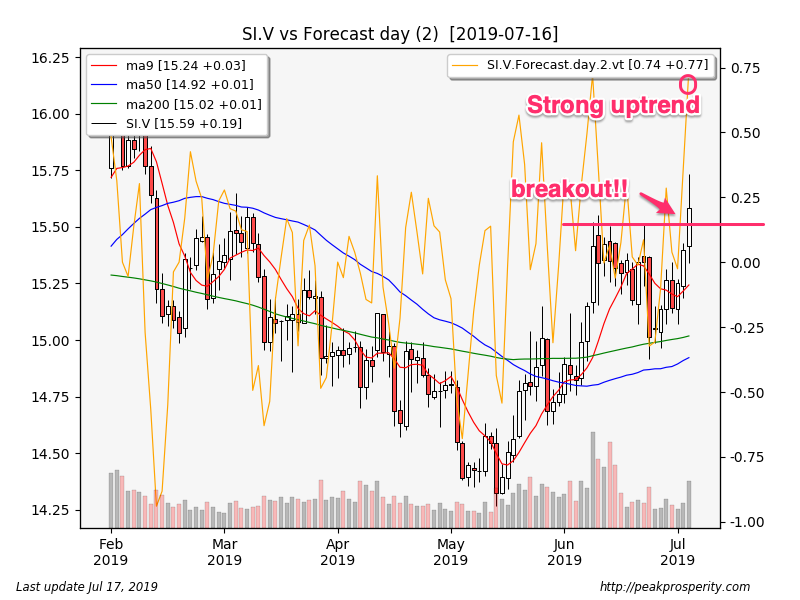 The miners were mixed today; GDX fell -0.50% on moderately light volume, while GDXJ was unchanged on moderately heavy volume. XAU climbed +0.14%, the shooting star candle was a bullish continuation, and forecaster inched higher and remains in a moderate uptrend. XAU remains in an uptrend in all 3 timeframes. Silver miners did especially well today – SIL was up +2.65%, and one miner I track (no position) – FSM – was up +14.39%. 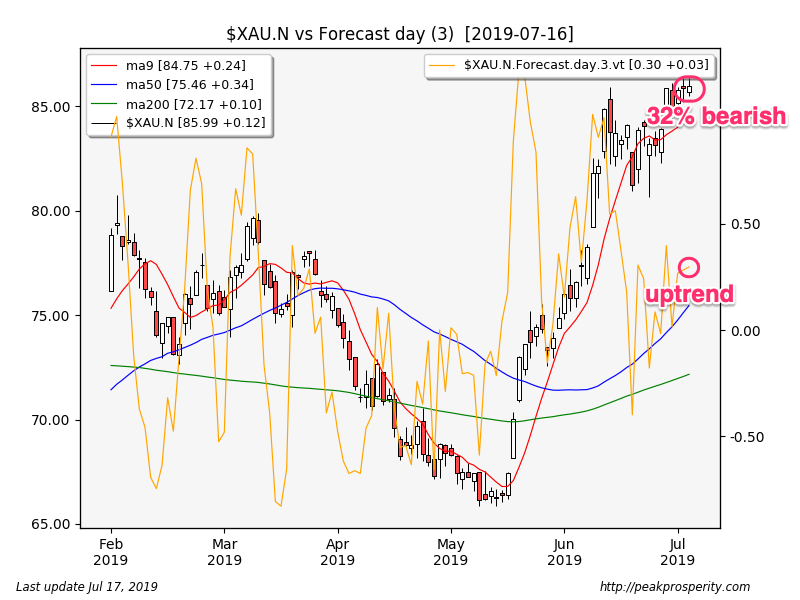 Platinum dropped -0.27%, palladium plunged -2.46%, and copper dropped -0.68%. The uniform drop in the other metals makes silver’s rally all the more surprising.

The buck jumped +0.49 [+0.51%] to 96.87. The buck started rising at the end of the Asia session, and it didn’t stop until about 2:30 pm in the US. The dollar rally did not seem to be tied to the US economic reports. The swing low print was just mildly bullish (37%), but forecaster jumped higher, moving the buck back into an uptrend. Today’s move was enough to cause the monthly to inch into an uptrend too – leaving the buck in an uptrend in all 3 timeframes. The buck also ended the day back above all 3 moving averages.

Crude plunged -1.81 [-3.05%] to 57.59. The plunge in crude came as both Trump and Pompeo suggested a softer tone towards Iran – following up on an NBC interview with Zarif, Iran’s Foreign Minister, where Zarif’s “tone” appeared open to dialogue. The long black candle was bullish (47%), but forecaster dropped hard, sending crude into a strong downtrend. Today’s drop was enough to send the weekly also into a downtrend; crude is now in an uptrend only in the monthly timeframe.  I kind of believe the specific crude forecaster more than the more generic candle predictor. 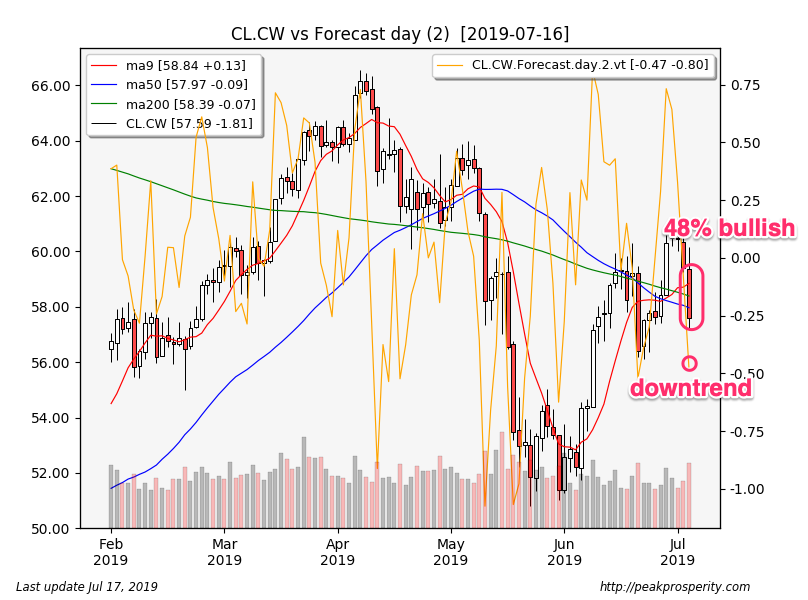 JNK fell -0.23%, the forecaster dropping into a downtrend. JNK has not looked healthy now for about a month. That said, the BAA.AAA differential fell -4 bp, and is now at 99 bp, which was enough to move the differential into a downtrend. As always, this series is delayed by a day – the drop was due to something that happened yesterday.

That’s a breakout for silver, and a convincing close above 15.50. Today’s move in silver seemed to be (roughly) tied to the Industrial Production report, but I’m not entirely sure that was the proximate cause, since silver has now rallied for 3 out of 3 days, and 5 of the last 6 days. There is more going on here than just a response to a single report.  Perhaps some big player has decided to accumulate silver.  And the massive increase in open interest (20 days of production!) suggest that someone is taking the other side of that bet.

Curiously, the two strong economic reports this morning didn’t cause the Fed rate cut projections to fall – instead, they rose. Why? Perhaps this: in an interview with CNBC, the President of the Chicago Fed, Charles Evans, said he’d “feel confident in arguing for a couple of rate cuts before the end of the year.”  I guess those pesky foreign cross-currents are more important than being “data driven” these days.

It sure looks like crude is headed back for the cellar, mostly because of the chance that peace might actually break out in the Middle East: that would eliminate the potential for a disagreeable (but crude-positive) “geopolitical event”, as well as bringing Iran’s oil production right back online, and – boy would that cause a glut. If peace did break out, oil will probably be back at 50 before you could blink. Theoretically anyway.

I’m in the odd position of having gone on and on (and on) about just how cheap silver was, how the gold/silver ratio is at 27-year highs, and how that will matter “someday”, but now that it is finally moving higher, I’m wondering what is causing the rally, and I’m sort of waiting for that “other shoe to drop.”  That’s market psychology in action!

This is from Alasdair McLeod a few weeks back: 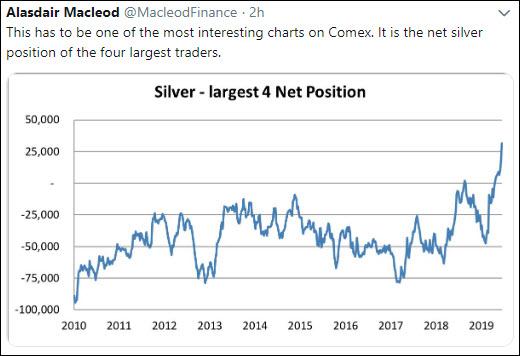 Do you have any idea how odd it is for “the big four” to actually be net long silver?

Good luck to the hedgies taking the other side of that.  I suspect their morale is about to get an improvement session or two.

COT report for silver is not currently showing a top.  I’m not sure it has quite the energy to make it through 16.20 this time around; RSI-7 is at 81.  But you just never know.

The silver miners are going absolutely nuts – up 7-12% just today.

This is what silver does.  I’ve seen it move 50 cents in one single day.

Of course, the time to buy is probably not today.  It was last week, or the week before, when I was all droopy and despondent.

That’s just how the markets work.  Its really hard to buy the lows in anything.

Thanks for the thoughts as to why silver rallied.  Certainly the big 4 banks being long definitely is curious.  I wonder how he got that particular stat.  Is it in the COT report somewhere?

I stumbled upon this possible explanation too:

“Silver had a delayed reaction to the prospect of central bank stimulus and appears to be playing catch up,” said Cieszynski. “Another way of looking at it is that investors taking profits in gold may be spreading their capital out to other precious metals with Silver currently the main beneficiary.”