Gold moved sideways within a relatively small range. The spinning top candle was bearish (41%), but forecaster moved higher putting gold back into a slight uptrend. Gold is now in an uptrend in all 3 timeframes, but that daily uptrend is really very slight. 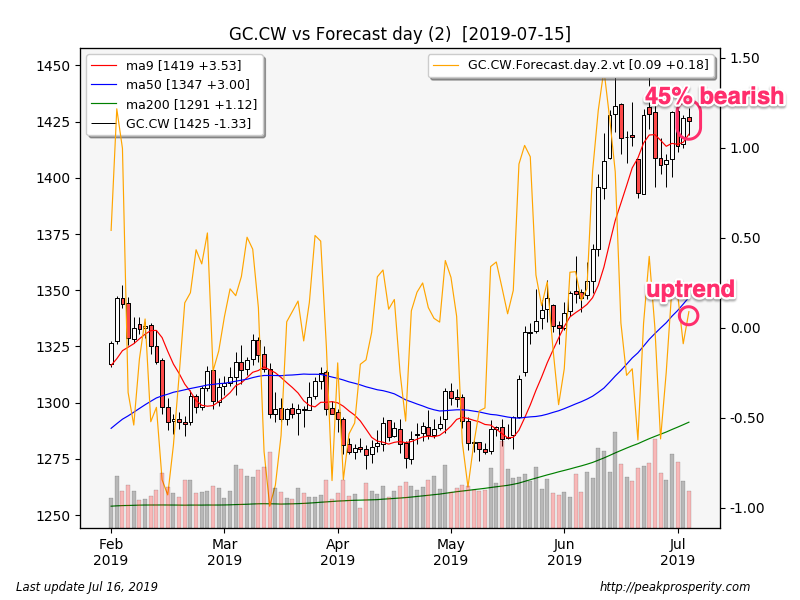 Silver rallied in Asia and London, retraced before the US open, and then continued its rally into the close. The long white candle was bearish (51%), but forecaster moved into a moderate uptrend. Silver weekly also moved into an uptrend as well. What got into silver today? I have no idea. A close above 15.50 would be a bullish signpost suggesting silver could be ready to break out. Silver is now in an uptrend in all 3 timeframe. 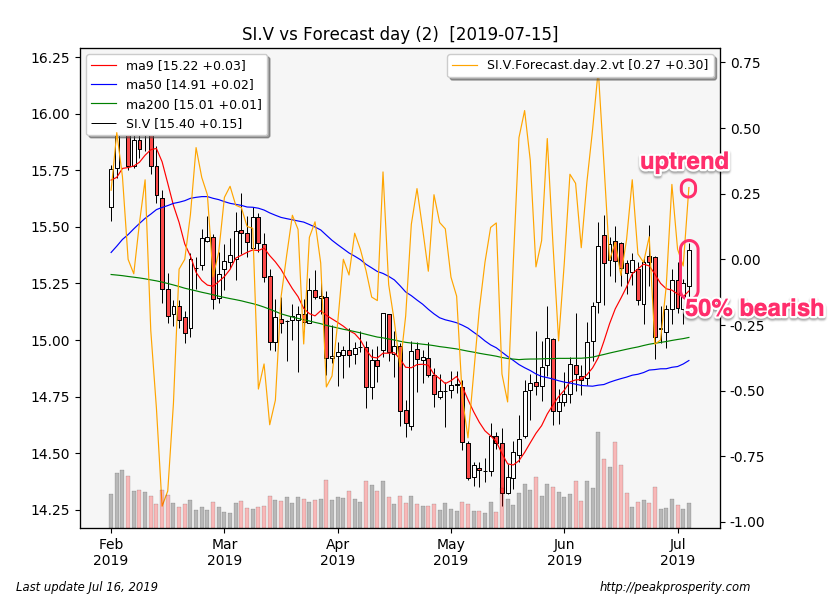 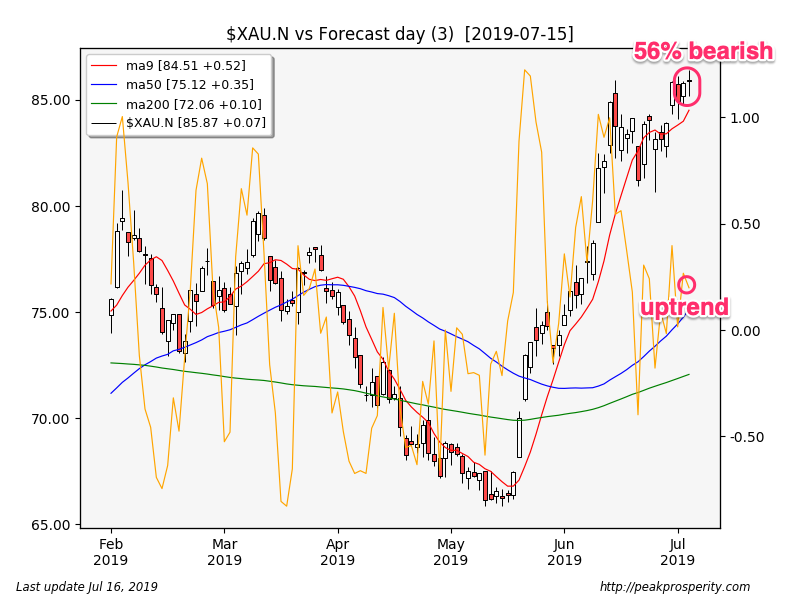 Platinum rose +1.46%, palladium climbed +1.45%, and copper moved up +0.74%. I’m guessing that the strong move in the other metals helped silver to rally too, although the rhythm of the moves in the other metals didn’t exactly match silver’s move higher.

Crude fell -1.04 [-1.72%] to 59.40. Crude tried to rally just before the US market opened, but the rally failed. The candle print was mixed – but it was also a 3-candle swing high, which is generally bearish, and forecaster was not happy at all, dropping hard into a slight downtrend. Crude remains in an uptrend in the weekly and monthly timeframes.

The problem for oil today have been a report by IEA that said global oil supply exceeded demand by 0.9 mbpd in the first six months of 2019, which was a big miss of IEA’s previous prediction which was an 0.5 mbpd deficit. IEA projects an oversupply through Q1 2020. https://oilprice.com/Energy/Energy-General/IEA-Huge-Oil-Glut-Coming-In-2020.html 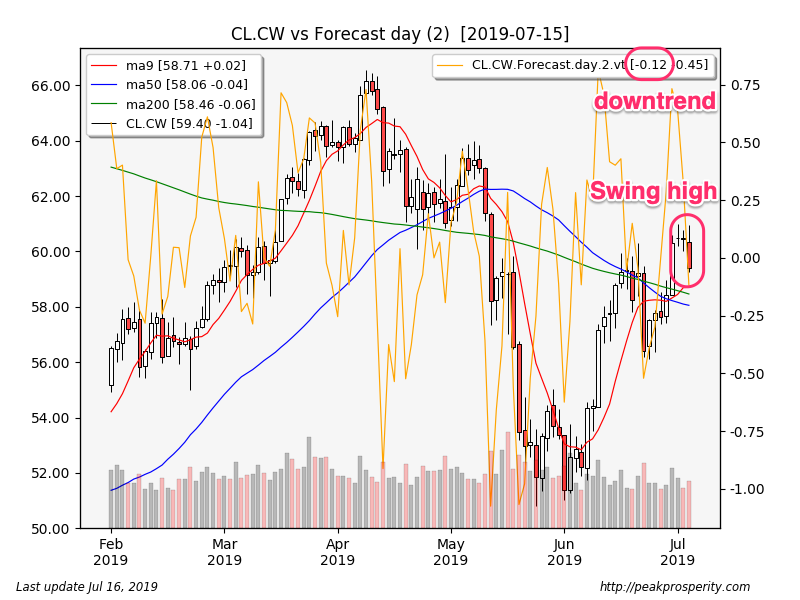 SPX inched up +0.53 [+0.02%] to 3014.30. This was another very minor all time high again today for SPX. The short black candle was a bullish continuation, and forecaster inched higher, remaining in a mild uptrend. SPX remains in an uptrend in all 3 timeframes.

JNK rose +0.14%, and JNK forecaster moved into a mild uptrend. JNK is now back above its 9 MA also. BAA.AAA differential fell -1 bp to 1.03%. It remains in a mild uptrend – but is not showing much sign of credit stress right now.

So…what’s the deal with the surprise silver rally? I wish I knew. The out-performance in silver was quite striking, resulting in a drop of a full point in the gold/silver ratio. All the forecasters point higher now for silver, and the new closing high was a breakout of sorts at least from a closing perspective anyway.  While one day doesn’t a trend make, a close above 15.50 would be a more substantial breakout for silver; it is the next waypoint for silver, which has not closed above that level since March 2019 – and then only briefly.

The other important thing today was crude’s possible reversal, driven perhaps by that IEA forecast of an oversupply through 2020. Shale continues to be a terrible investment, but an excellent source of production in an already-oversupplied market. For example, veteran company OXY (Occidental Petroleum) was hit hard recently after its successful bid to take over shale producer APC (Anadarko Petroleum); the market seemed to be saying, “oh goodie, OXY is now going to lose a bunch of money.”  And some new pipelines in the Permian completing later this year suggest that even more production from shale will be hitting the market in late 2019.  More supply from shale seems inevitable – why so much money is chasing such unprofitable ventures, and why it has done so for so long…it is a constant source of amazement for me.  $187 billion in capital has been destroyed.  Perhaps “profitability is just around the corner.”  Or maybe not, if we get one of those worldwide slowdowns. 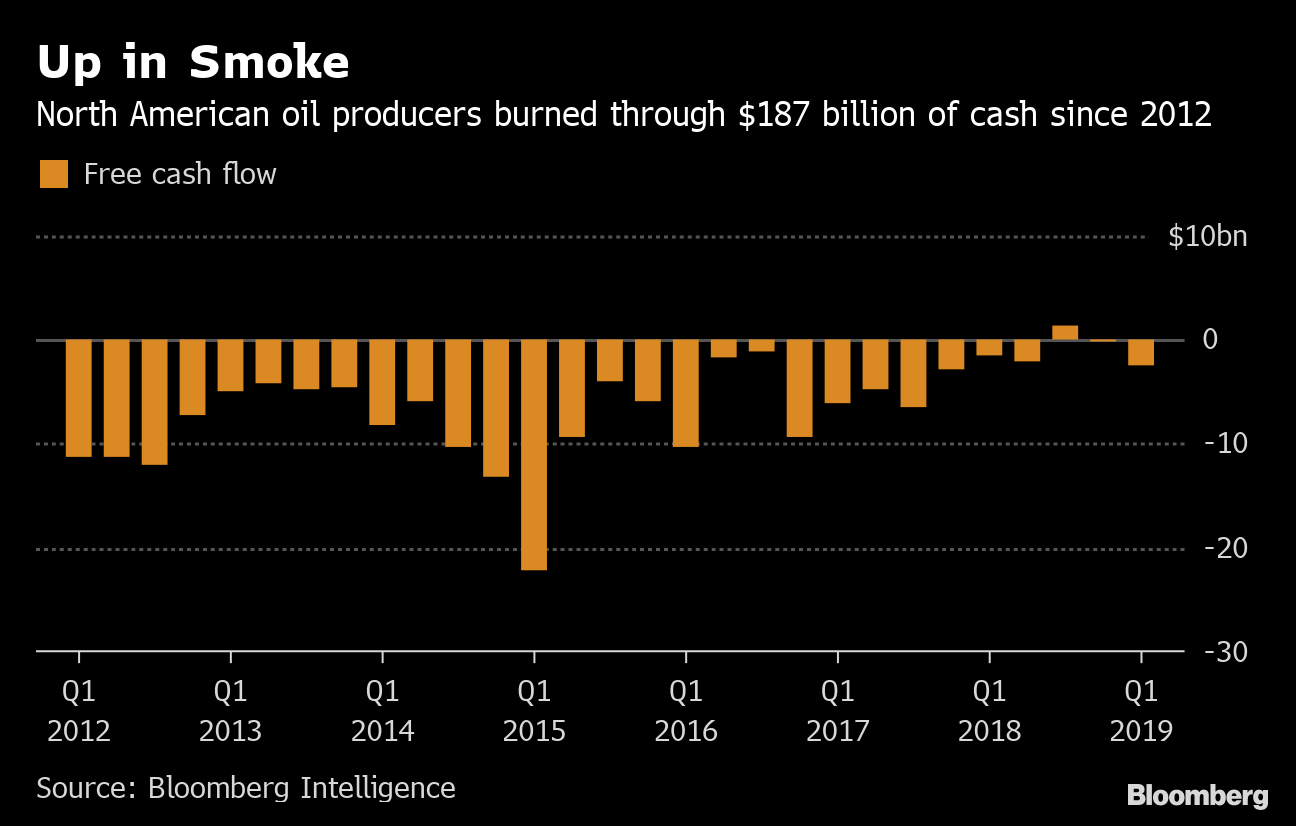 Dave, I know you follow Martin Armstrong’s views quite a bit. What did you make of the interview with Chris? Listening to him, I find it hard to think he’s very credible. I find he’s hard to follow and seems to jump around topics and not answer questions directly. Does that not undermine your confidence in his opinions? I suppose at least he seems to have his own unique view of things. Interested to hear your thoughts.

i wasn’t able to understand a number of points, also.

I did understand that $$ are fleeing Europe and the US stock market is the only place for big money to flow to., hence the Dow will rise.

Much of my the rest wasn’t clear.

Honestly, I agree with you guys.  He was jumpy this interview.  He did not seem to be at his best.  And he’d kind of wander off.  And he just repeated stories I already know.  I can’t tell you why or what’s up.

I like him because I’ve used some of his technical concepts in my own code, and it seems to work.  (I just wish I had more details).  That, and the concept of adjusting asset returns for currencies for foreigners, capital flows in and out, a very extensive understanding of history (and some very long-lived time series), and the fact that everything interacts with everything else, and that most people tend to focus domestically only (I’m guilty of that too, but at least I know it).

But this interview was not his best.  I can’t tell you why.  Maybe it was his 20th interview of the day.  He has been making the rounds to promote his conference.