Most of the excitement – at least in gold, silver, equities, and bonds – came after the release of Powell’s statement to Congress at 8:30 am. Powell himself didn’t start speaking until two hours later, but the statement release was all the market needed.  Cross-currents have returned.

Powell said that since Fed officials met last month “uncertainties around trade tensions and concerns about the strength of the global economy continue to weigh on the U.S. economic outlook.” In addition, inflation has dipped further below the Fed’s annual target level.

Referring to rates, Powell repeated a pledge the Fed made in its June policy statement that officials would “act as appropriate to sustain the expansion.” But notably, he added that “many” Fed officials saw that the case for a looser monetary policy “had strengthened.”

So we probably get a rate cut in July, even though payrolls was a blowout +224k.  Is the Fed really “data driven”?  Powell’s lips say yes, but his actions suggest otherwise.  Or, to be fair to Powell, the opinion of “many” Fed officials say otherwise.  Who wants to be the only person voting against a rate cut?  Now that would be embarrassing.  Trump has raised the institutional stakes for the Fed by publicly hosing Powell for keeping rates high; if a recession does happen, against Trump’s “advice”, it is probable that the ever-disruptive Trump will throw the Fed under the bus, and perhaps even start making noises to get rid of the Fed entirely.

Does the Fed want this?  Trump could be around for another 4 years.  They just need to wait him out, and toss him a bone every now and then to keep him at bay.

Gold moved slightly lower in Asia and London, then spiked higher once the text of Powell’s testimony to Congress was released at 8:30, and once his testimony began, gold moved slowly higher through end of day, closing at the high. The confirmed bullish high wave was bullish (54%), and forecaster jumped higher into an uptrend. Gold is now right at resistance; a close above 1428 is the next milestone. Gold is back in an uptrend in all 3 timeframes. The rough ascending triangle pattern that is now forming suggests to me that the odds favor a breakout to higher levels.  That, plus all those forecasters are also pointing higher too.

COMEX GC open interest rose +6,590 contracts.  It does not look as though there was much suppression happening today at all. 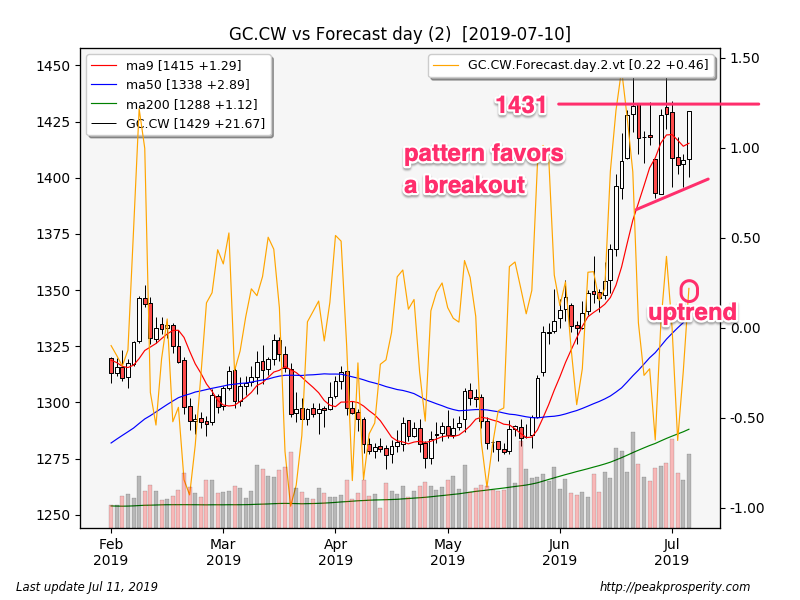 Silver spiked higher along with gold at 8:30, but didn’t have quite the bid underneath it that gold did. The long white candle was bearish (47%), but forecaster jumped higher, putting silver back into an uptrend. Silver ended the day back above its 9 MA, which is a positive sign. Silver is back in an uptrend in both daily and monthly timeframes.

The gold/silver ratio jumped +0.69 to 93.55. What does this mean? It says that silver doesn’t benefit in the same way gold does from the whole “rate cut” phenomenon. If gold’s rally has to do with the ongoing safe haven move, silver’s participation (at least under the current set of correlations) may well continue to be lackluster. While more traders are really starting to notice gold – it is still the case that “nobody cares” about silver. 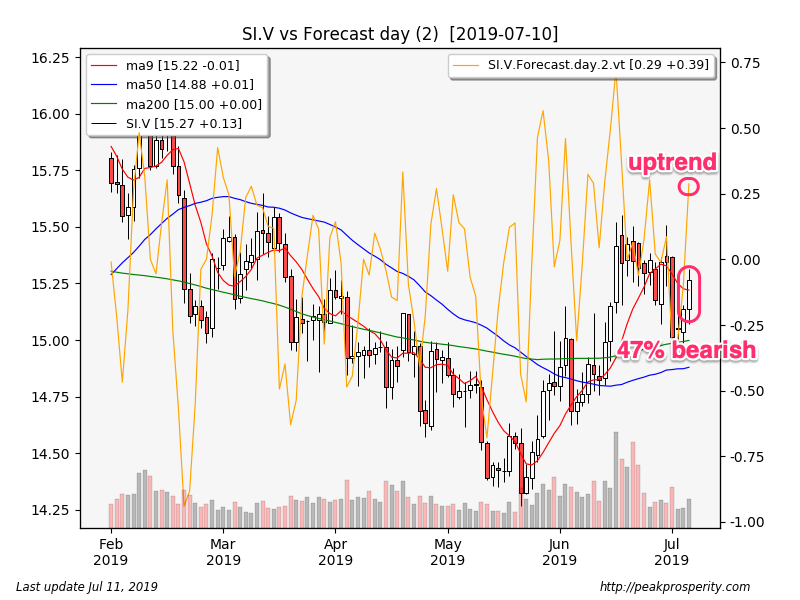 The miners gapped up at the open, fell in the first hour, but then rallied all day long, closing at the highs. GDX rose +2.14% on heavy volume, and GDXJ climbed +2.69% on very heavy volume. XAU climbed +2.32%, the closing white marubozu was somewhat bearish (39%), but forecaster jumped higher and is now in an uptrend. XAU ended the day at a new multi-year closing high; it isn’t quite a breakout, but it still looks very positive. XAU is back in an uptrend in all 3 timeframes. 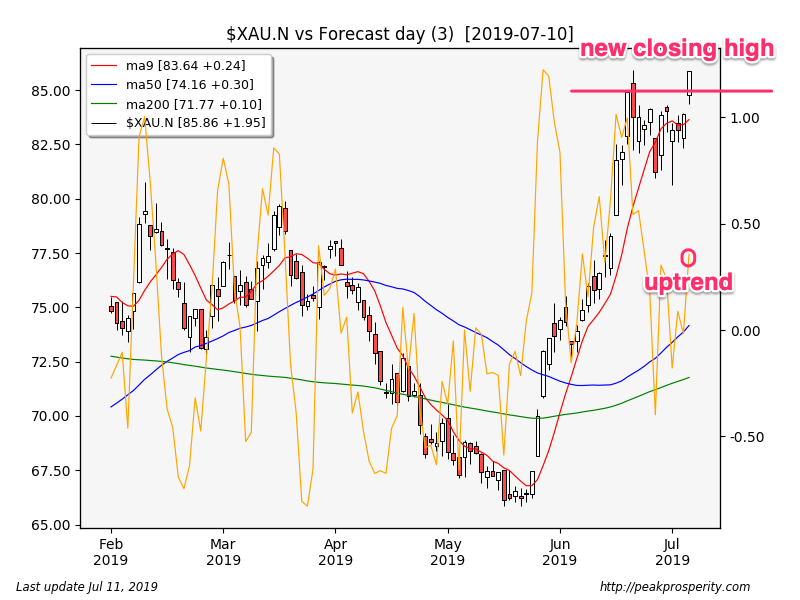 Platinum jumped +1.87%, palladium rose +2.91%, and copper climbed +2.36%. The other metals all did very well – better than gold, actually – and palladium broke out to a new all time high. Palladium’s breakout was, curiously, all about the spike at 8:30 am, while copper and platinum rallied in advance of the statement, and owe just half of the day’s gains to Powell. Is palladium a new safe haven? Or was it just looking for an excuse to rally? Its hard to know.

The buck plunged -0.40 [-0.41%] to 96.56. The swing high/bearish engulfing was bearish (49%), and forecaster dropped hard, moving the buck into a downtrend. The buck is now in a downtrend in both daily and monthly timeframes – although the trends are not particularly emphatic, and with the forecasters split, it is hard to know if this is a real move or not. 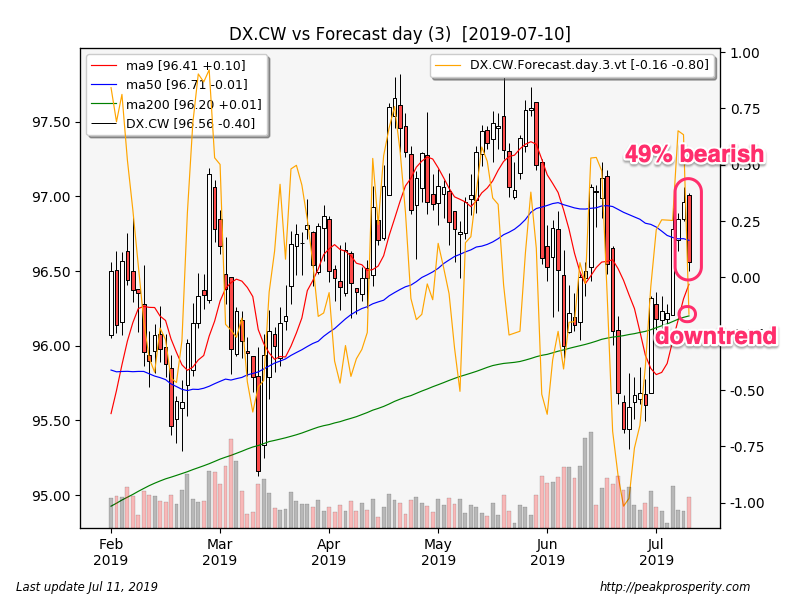 Crude climbed +1.90 [+3.25%] to 60.32. Crude broke out to a new closing high. Intraday, crude’s rally was a slow, steady, all-day-long affair, that started following yesterday’s very bullish API report, and just continued throughout the day, where crude closed at the highs. The EIA report backed up API (crude: -9.5m, gasoline: -1.5m, distillates: +3.7m), but it did not seem to change the trajectory of crude’s intraday rally much at all. It looked very bullish to me. The opening white marubozu was bearish (46%) but forecaster screamed higher, moving crude into a strong uptrend. Crude remains in an uptrend in all 3 timeframes. The trends all look reasonably strong. It sure looks like crude will be moving higher. 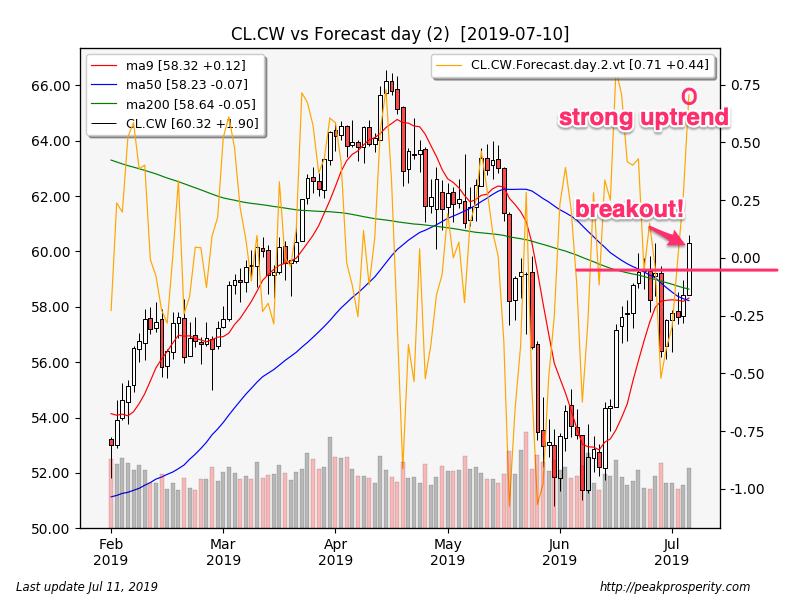 SPX rose +13.44 [+0.45%] to 2993.07. SPX rallied strongly higher (to a new all time high) starting at 8:30 am, but then fell back from the highs by end of day. The spinning top candle was surprisingly bearish (57%), and forecaster fell, although SPX remains in a mild uptrend. It appears as though SPX is right at resistance – although it was a new intraday high, SPX did not make a new closing high. SPX remains in an uptrend in all 3 timeframes, but the daily is looking steadily weaker.

TLT fell -0.55%, making a new low. Forecaster fell into a moderate downtrend. TY actually rallied 0.19%, but the spinning top candle was a bearish continuation, and forecaster moved higher but remains in a downtrend. TY remains in an uptrend in both weekly and monthly timeframes. The 10-year yield rose +0.7 bp to 2.06%. The long bond was not where the action was today. Instead, it was the short end of the curve that saw all the movement: for instance, the 3m yield fell -6 bp, and the 6m yield fell -8 bp. Money rushed to buy the short term instruments to lock in rates before the now-almost-certain Fed rate cuts will take effect.

JNK rose +0.29%, forecaster jumped higher, but remains (for now) in a downtrend. The BAA.AAA differential has fallen to 1.03%, forecaster remains in an uptrend, but as you probably remember, the series is one-day delayed; we’ll have to wait until tomorrow to see how Powell’s statement today affects the differential.

Ok, so how did the markets respond to the assessment that the Powell Fed would be dropping rates 25 bp at the upcoming July meeting?  Gold moved right up to resistance, the miners broke out to a new closing high, and short-term bonds rallied sharply.  However, the equity market’s response was much more tepid, as was the 10-year treasury.  Crude is doing its own thing – it seemed unaffected either way about anything Powell said.

It almost feels as though SPX had a “sell-the-news” event.  Based on this very tepid reaction today, I do not think the campaign of rate cuts that the market expects will lead to any dramatic new highs for equities.

Gold, on the other hand, appears as though it is now the place to be.  I don’t want to sound all “King World News” about this, but you just need to compare the responses of the different instruments to the same event.  Gold did really well and it closed at the highs, as did the miners.  Equities and bonds rallied briefly, but then fell.  And the buck tanked, which is almost always good news for gold.

A gold close above 1431 could lead to another strong move higher in the yellow metal.

Silver remains quite weak.  Nobody cares about silver right now – and nobody has cared about it for quite some time.

Palladium is behaving as though there’s a special new technology that will save the world that depends entirely on Palladium.  Well, I’d like to think that, but here’s a less exciting explanation that I found credible; it is about internal combustion engines.  The executive summary is: platinum = diesel, palladium = gasoline, the VW diesel cheating scandal hammered diesel engine demand in Europe, so diesel+platinum fell, and palladium+gasoline rose.   https://banyanhill.com/electric-cars-save-palladium-stocks/

That’s too bad, really.  I was hoping for cold fusion.  But this story makes sense.  I’m not sure palladium climbs to infinity on the back of this change, but it explains the price action over the past few years.

Dave, thanks for the potential reason of the outperformance of Palladium… I’ve been scratching my head about that one for a while!

You just can’t make this stuff up.

Or words to that effect.

I looked it up.  No kidding, its true.  And the conviction is actually quite recent.

I mean, couldn’t they find someone else who – let’s say – hadn’t been convicted of a felony to run the CENTRAL BANK OF THE EU?  There really wasn’t anyone else qualified?  The pool of candidates was actually that shallow?

“No matter how cynical you become, you just can’t keep up.”

I see Alasdair Macleod has been crunching Comex concentration ratios, and interestingly suggests that JPM may have been acting all along not only as principal in the silver market, but also on behalf of China [which, if true, conveniently gets JPM off the hook with the CFTC in the US].

Macleod sees the possibility that China is now net long on silver, while other large players may not be so. Yet.