Gold tried to rally today, but the rally failed, retracing almost all of the day’s gains. This ended up with a doji candle print, which was neutral. Forecaster was really unhappy with the results, dropping -0.62 to -0.08, which is a sell signal for gold. It seems as though there is serious selling pressure at 1310/the 200 MA.  I agree with the forecaster; gold really doesn’t look very strong at all.  The buck is down 4 days in a row, and gold just can’t seem to move higher.  Unless gold can close above that 200 MA, it probably ends up selling off. 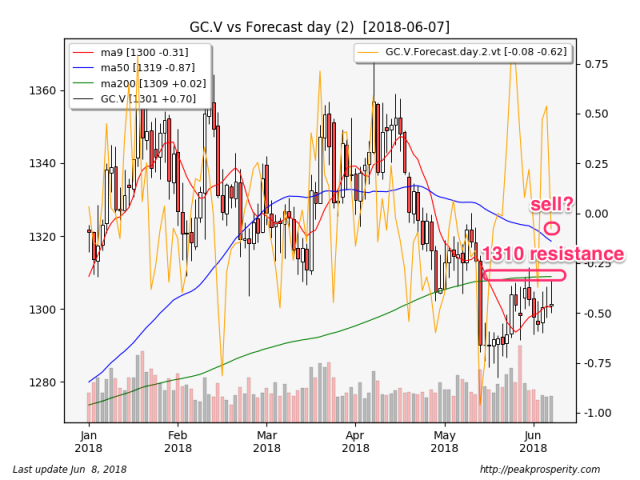 Silver tried rallying today, making a new high to 16.94, but the rally failed, and silver lost almost all of the move by end of day. While the high wave candle print was neutral, forecaster jumped +0.25 to +0.47. That sounds good, but I’m less sure; I don’t like the failed rallies so much. It appears that managed money is jumping in heavily short here at the top of the recent trading range. 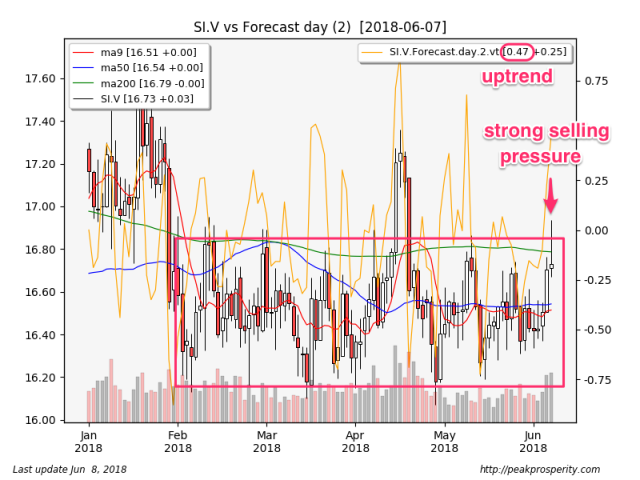 Miners sold off slowly all day long. GDX fell -0.58% on light volume, and GDXJ edged down -0.12% on very light volume. XAU forecaster lost -0.01 to +0.35, which is still an uptrend for the miners. XAU has fallen below the 9 MA once more.  Over the longer term, XAU continues to move slowly higher, in spite of the poor performance of gold. 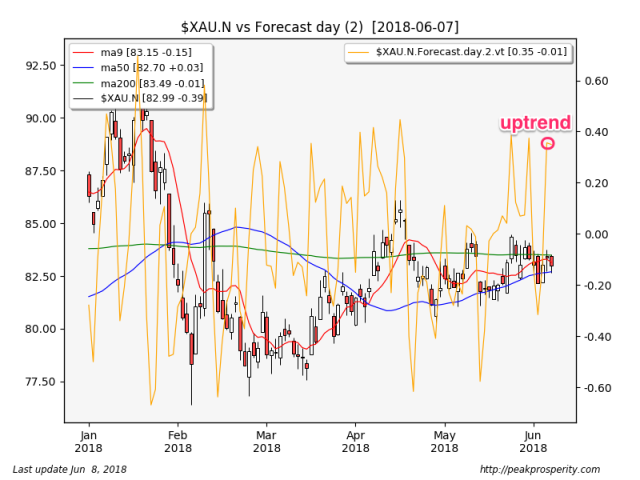 Platinum rose -0.60%, palladium dropped -0.51%, and copper dropped -0.15%. Copper made a new multi-month intraday high, up 5 cents, but the rally failed; volume was extremely heavy. Intraday, the top in silver aligned pretty closely in time with the top in copper. Open interest has jumped dramatically for copper in the last few days. Someone is going short after the big move up. Copper forecaster dropped -0.42 to +0.63.

The dollar fell -0.27 [-0.29%] to 93.00. The buck continues to drop, moving down 6 days out of the last 7. Forecaster dropped -0.08 to -0.36. While the daily forecaster moves deeper into downtrend, the weekly and monthly forecasters remain in uptrends. Helping to push the Euro up (and the buck down) are rumors that Draghi will end QE at the upcoming meeting next week. The FOMC is also meeting next week; if the Fed raises rates, as they are expected to do, and Draghi ends up doing nothing, the buck could shoot higher in response.  I don’t have a prediction, but it seems as though the market is pricing in an ECB tapering announcement.

Crude rallied +0.93 [+1.43%] to 65.93. Candle print was a swing low; forecaster jumped +0.46 to +0.44, which is a buy signal for crude. I’m guessing that the plunge in crude is over. How come? Perhaps its the continuing meltdown in Venezuela’s oil production and shipments. This time it is a problem with shipping facilities; Venezuela is considering a force majeure declaration to allow it to bail out of its contractual obligations to deliver oil. If its not one thing, its another. Nick Cunningham at oilprice has the details: https://oilprice.com/Energy/Crude-Oil/Venezuelas-Oil-Meltdown-Defies-Belief.html 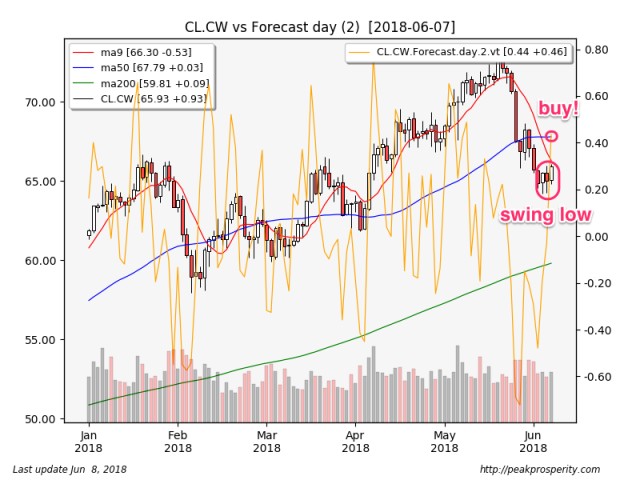 JNK rose +0.06%; it has moved higher for 4 straight days now. JNK is in a strong uptrend according to the forecaster, but on the chart it still looks pretty feeble. BAA rates continue to move slowly higher; that’s a contrast with the slow rally in junk debt.

The increase in silver’s open interest over the past two days is nothing short of shocking: perhaps 45 days of actual silver production was added in paper silver contracts. That is clearly putting a lid on any silver price rally. Once something trades in a range, traders sometimes short the top of the range, and then cover at the bottom, making money on the moves within the range. At some point it will break out, but its hard to know when that will be. Once it does, the scramble to cover all those short positions will lead to a much stronger rally. Until that happens…it is dangerous to buy the breakout.  Of course, you can always buy at the lows, and sell the highs.  That works too.

Copper might be the key. If copper breaks out above 3.32, we could see a breakout in silver too.