Gold fell -7.10 to 1289.50 on moderately heavy volume, while silver dropped -0.12 to 17.58 on moderately heavy volume also. Today, the ECB revealed it was planning to cut its inflation outlook – hinting that money printing will remain intact. This sent the Euro lower, along with silver too. Also released was a transcript of Comey’s statement to Congress, which didn’t contain any real bombshells.

Gold took a modest hit after the ECB comment, rebounded, but then fell more seriously after 10:30am. Some buyers did show up at end of day, but they weren’t that numerous. The candle print for gold was a dark cloud cover, which the code felt was bearish: a 51% chance of marking the top. 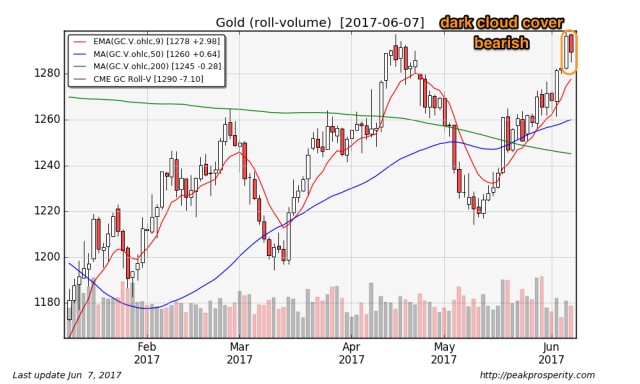 Silver was unable to make a new high, and plunged relatively hard following the ECB announcement. It did recover somewhat, but then it resumed dropping after 10:30am. Candle print was a dark cloud cover, which the code felt was a 23% chance of marking a top.  That doesn’t look all that serious. 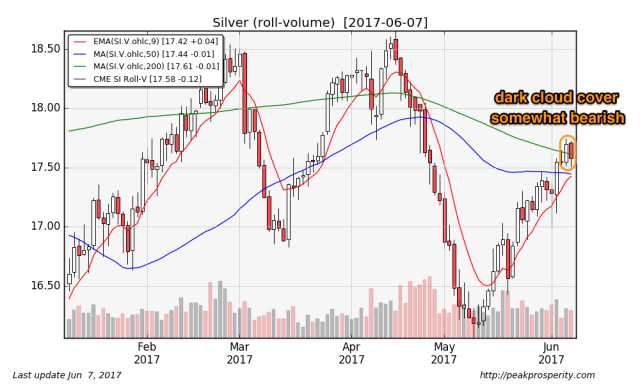 Miner did surprisingly well, with GDX dropping -0.63% on moderate volume, while GDXJ fell just -0.26% on moderately light volume. Mostly, the miners just traded sideways within a range today; both ETFs printed the relatively rare descending hawk pattern, which the code felt was neutral. Traders appear to be on hold ahead of the big day tomorrow. 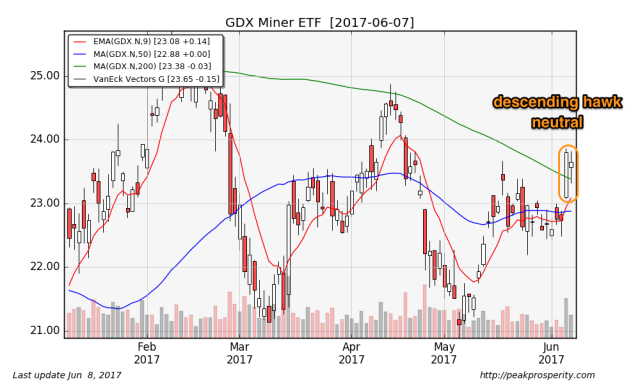 Platinum fell -1.74%, palladium plunged -2.60%, while copper rose +0.26%. Platinum printed a vicious-looking swing high (88% chance of a top), while palladium made a new high, and then sold off hard. Platinum is hinting at a resumption of the downtrend for PM. Maybe its more than hinting.

The buck tried rallying, but largely failed, rising +0.12 to 96.51. The buck is bouncing around its lows, with no buyers seemingly unwilling to step up prior to Comey’s testimony on Thursday. The spinning top was seen by the code as mildly bearish.

Crude was crushed, plunging -2.16 [-4.50%] to 45.86 on very heavy volume. The closing black marubozu was seen as bearish. The reason for the plunge? The EIA report showed a 3m barrel crude and gasoline oil inventory build, which proved to be a very disagreeable surprise to the market. Immediately following the release, crude plunged $1.60 in five minutes, and then proceeded to sell off slowly through end of day. 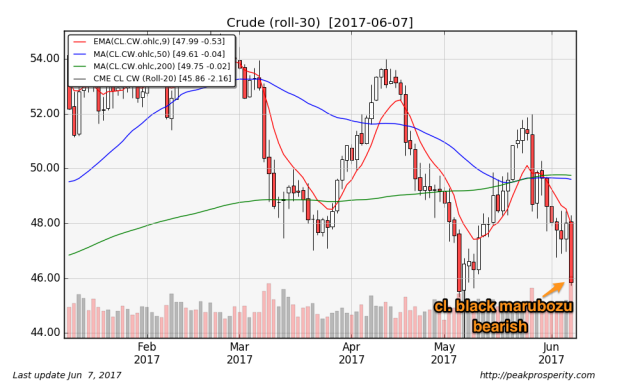 SPX rallied +3.81 to 2433.14, the market seemingly ignoring all the fuss with Comey, Trump, UK elections, and the near-crash in oil. Financials did best (XLF:+0.77%) while energy, not surprisingly, was weakest (XLE:-1.41%). Candle print was a high wave, which the code felt was mildly bullish.

TLT fell today, dropping -0.48% and printing a swing high, which the code felt had a 50% chance of marking the top. TLT remains above all 3 moving averages, but the selling in bonds ahead of the drama tomorrow doesn’t bode so well for the risk-off trade.

JNK fell -0.21%, the pace of its decline starting to accelerate. Today’s candle print was a spinning top, which the code found neutral.  JNK doesn’t do so well when crude drops.

CRB sold off hard, dropping -1.38% and crashing through its previous low set back in early May. Only 2 of 5 groups fell today, but energy as usual ends up having the largest influence on the index. The swing low from yesterday is now invalid. Commodities are very bearish.

It appears as though much of the facts associated with tomorrow’s events have already been leaked ahead of time; ECB will keep printing, Tories will (probably) win in the UK, and Comey won’t end up – probably – getting Trump impeached.  At least not tomorrow anyway.

Now comes the danger of this turning into a sell-the-news event for PM, which we may be seeing early indications of in the pair of dark cloud cover candle prints for gold and silver.

Nice double top in gold followed by a sharp sell-off today.  Might as well give up all the gains.  Miners tanking too.

There is a meme that continually resurfaces that that goes something like: if only the environmental protection racket got out of the way, then the US has plenty of resources to drill up. California seems to be the perpetual location where this domestic oil would be found.

Is there any validity to this?

My gut tells me that the environmental protection folks are not all that powerful (see Dakota Access Pipeline) and if there was easier oil to get to then someone would be doing it.

Sold my USLV position today. Not excited about the exit, but I was not prepared for the top being in the high $17s. Will be looking to play DSLV and JDST come Monday.

I did get the false breakout right (well we will see how she closes tomorrow) and I did get my second price target right…. do I still get a gold star?

This particular version of my code has been updated; paint is still drying, so I'm not entirely sure about the numbers.  It should (theoretically) be more accurate than the previous version since it incorporates some new context.

This is the first bad sign I've seen since the swing low two weeks ago. 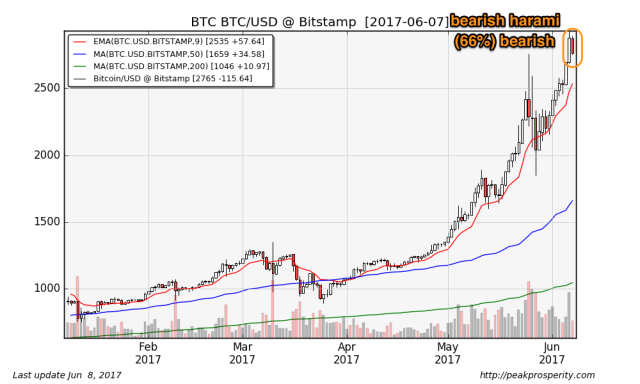 Well, I'm not sure you get a gold star, maybe a copper star.  You only get a gold star for correctly predicting gold's ultimate breakout.  🙂  We do have our biases here, you know.

I have a new rev of my code that incorporates some longer-term pattern context; I just ran it on yesterday's data, and it was relentlessly bearish on most of the mining shares.  It didn't have anything bullish to say about any of them!  Paint is still drying, however, so no guarantees.

Boy, it sure would have been nice to see that data yesterday!

So far, today sure does look like a sell-the-news event.

Italian elections have been put off once again, Tories look like they're going to win, ECB didn't say much (but was relatively dovish – causing the Euro to fall and the buck to rally), and I'm not sure about how the Comey testimony went.

Main take-aways from the Comey testimony are:

1) We heard pretty much what we already knew

3) John McCain has lost his marbles

Main take-aways from the Comey testimony are:

1) We heard pretty much what we already knew

3) John McCain has lost his marbles

And Comey had his friend leak the memo before the "tapes" Trump tweet.

Who was it?   Having access to FED printed money is great!

For me, all that matters is this grid. There are hundreds of lines if you map it all out, but it's far more predictive than anything else. Some lines are more important than others, but every breakout, waterfall, high, low, close, open can be explained by the grid.

Trade the grid, and ignore the rest I say! 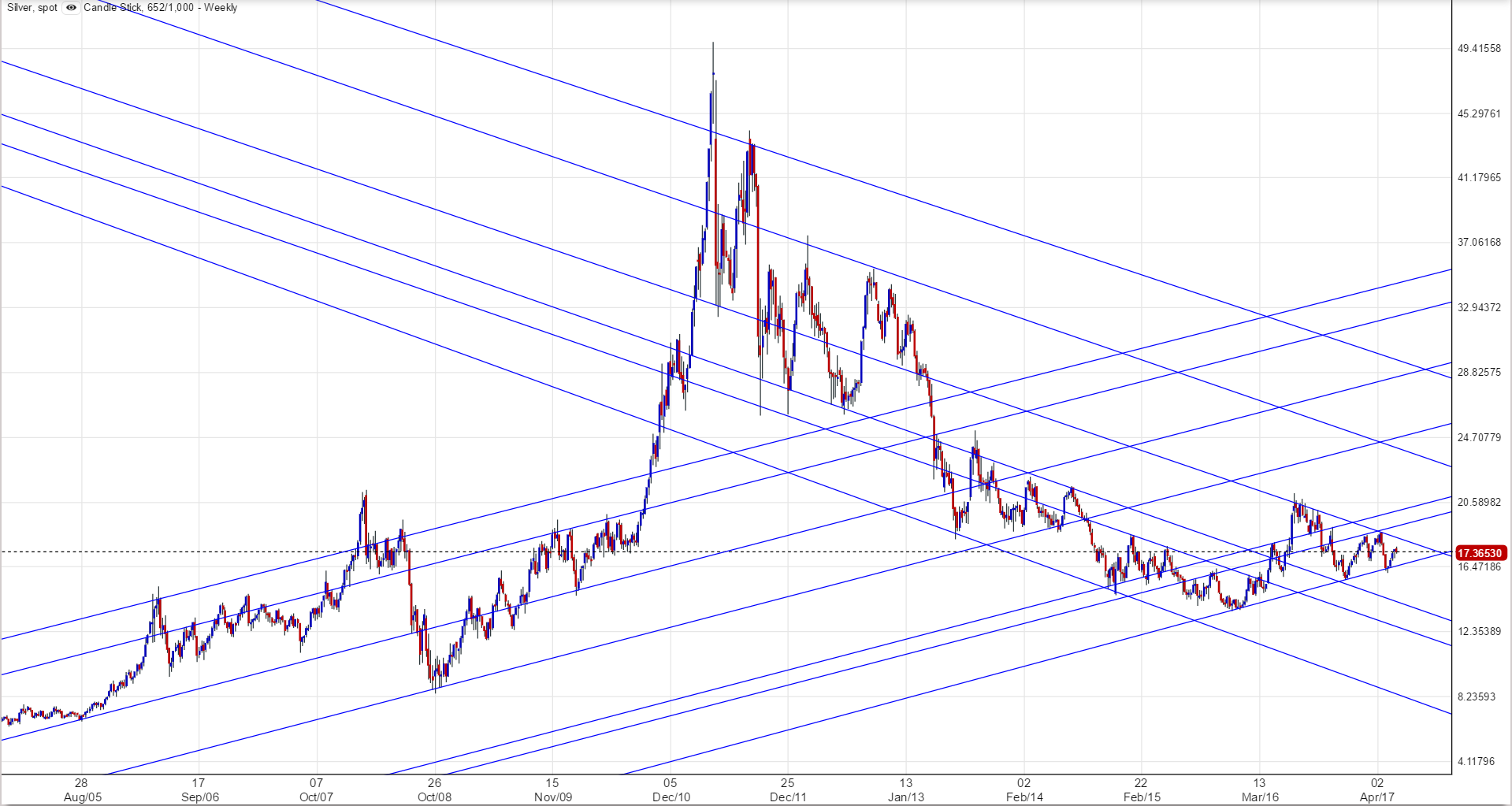