Gold moved higher for much of the day, topping out just after noon at 1344.20 and then it faded somewhat into the close. The spinning top candle was unrated, and forecaster fell but remains in an uptrend. Gold remains in an uptrend in all 3 timeframes.  Unrated candles happen during “inside days” – both the low and the high are “inside” the previous day’s low and high, and the pattern doesn’t match one of the two-candle patterns like an engulfing or a harami. 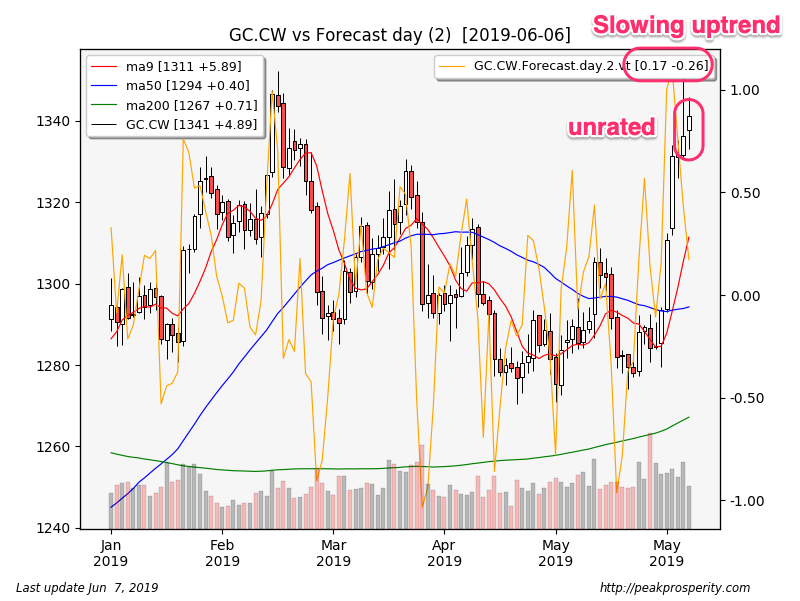 Silver topped out earlier than gold, hitting 15 at around 8:30 am, and then faded for the rest of the day. The spinning top candle was unrated, and forecaster fell, remaining just barely in an uptrend. Silver remains in an uptrend in all 3 timeframes.  Silver did manage to close above the 50 MA, which is a positive sign, but that forecaster sure is hinting at a possible reversal.

COMEX SI open interest rose +4,199 contracts, or 9 days of global silver production in new paper.  Looks like a bunch of new shorts piling in as the rally slows down. 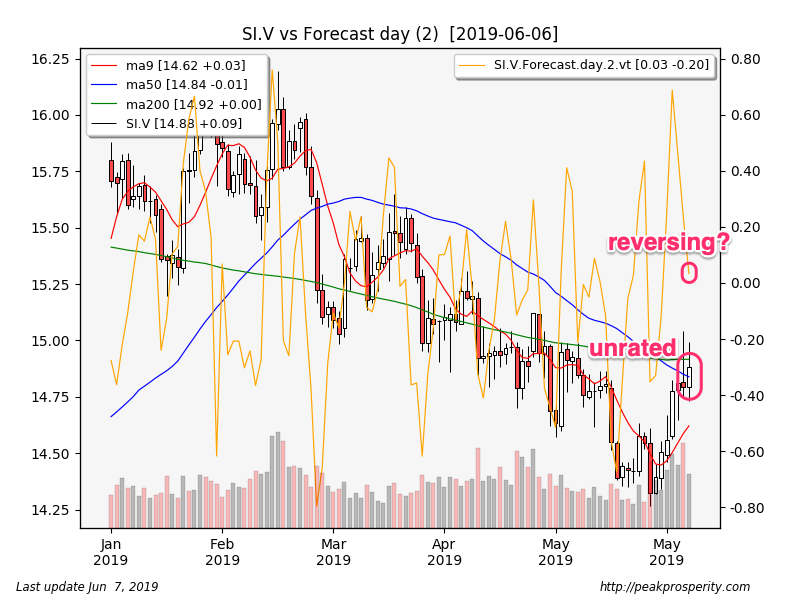 The miners bounced around in the morning, but closed near the highs. GDX rose +1.06% on heavy volume, while GDXJ climbed +0.84% on heavy volume. XAU rose +0.96%, the spinning top candle was unrated, and forecaster edged lower but remains in a strong uptrend. XAU remains in an uptrend in all 3 timeframes.  While gold and silver seem to be slowing, the miners continue to look strong. 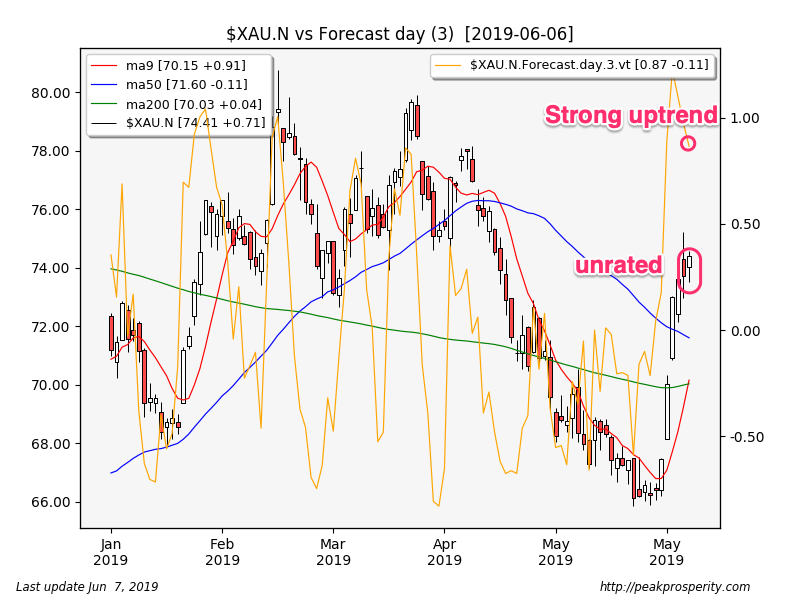 Platinum rose +0.04%, palladium climbed +1.33%, and copper rallied +0.72%. Copper may be putting in a low here – the daily reversed into an uptrend today, and the weekly & monthly both are on the edge of doing so. A copper rally would help silver.

The buck fell -0.28 [-0.29%] to 96.51. Mostly, that was due to an ECB meeting, where Draghi announced that rate policy will remain where it is through Q2 2020. However, this was not as dovish as expected – the market was expecting perhaps some sort of rate cut.  This “surprisingly hawkish” ECB is what caused the Euro rally, and the resulting dollar decline. The spinning top candle was a bearish continuation, and forecaster moved higher but remains in a downtrend. The buck remains in a downtrend in all 3 timeframes.

Crude jumped +1.47 [+2.84%] to 53.32. The rally started at 2 pm, with the buck rising $1.50 in about 30 minutes. The bullish engulfing candle pattern was quite strong (51%), and forecaster jumped, moving back into an uptrend. Crude remains in a downtrend in the weekly and monthly timeframes.

What caused the pop at 2pm? Oilprice tells us that the rally was caused by reports suggesting that the US was considering delaying imposing tariffs on Mexico to give the two nations more time to discuss illegal immigration into the US. https://oilprice.com/Latest-Energy-News/World-News/Oil-Perks-Up-As-US-Hints-It-May-Delay-Mexico-Tariffs.html 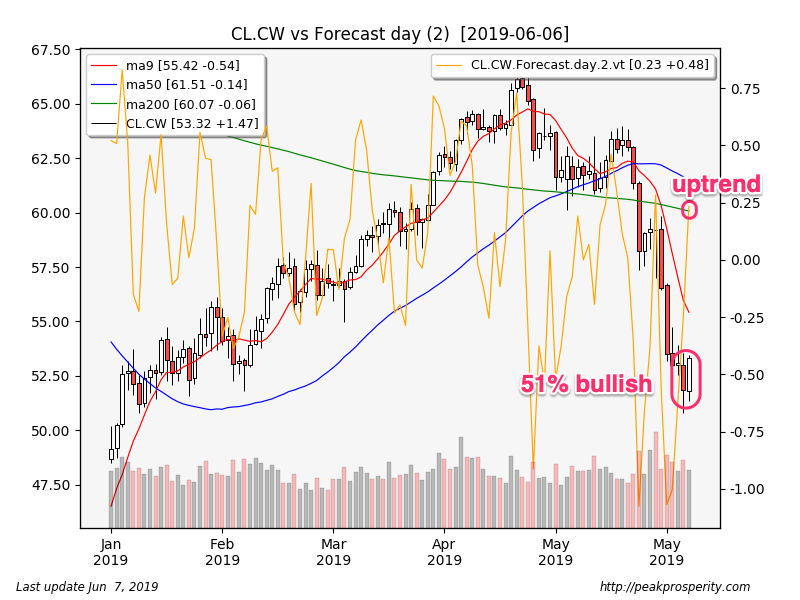 SPX climbed +17.34 [+0.61%] to 2843.49. The long white candle was a bullish continuation, and forecaster inched lower but remains in a strong uptrend. Even with today’s rally, SPX remains in a downtrend in both the weekly and monthly timeframes. The weekly bullish engulfing candle is looking reasonably strong (49% bullish), but we must await the close on Friday.

TLT rose +0.32%, the spinning top was unrated, and forecaster moved higher, but remains in a downtrend. TY rose +0.06%, the doji was a bearish continuation, and forecaster moved lower, entering a downtrend. TY is now in an uptrend in just the weekly and monthly timeframes. The 10-year yield was unchanged at 2.12%. The 10-year yield was unchanged at 2.12%.

JNK rose +0.25%, the long white candle was a bullish continuation, and forecaster moved higher into its uptrend. Cousin HYB is behaving in a similar manner. The BAA.AAA differential inched up 1 bp, and is now at +1.03%. In spite of the rising JNK prices, the credit markets are signaling – slowly – an increasing level of concern.

Gold continues to look strong. While it did encounter some selling pressure today, both gold and silver do seem to be continuing to attract money, even after the relatively strong recent rally. The miners are also doing reasonably well, although the move has slowed down.

Still, even if we have a correction in the metals, I suspect it will be brief. Things seem to be proceeding inexorably towards a recession. That means lower rates, and gold definitely seems to like lower rates. Lower rates also suggests a falling dollar, which gold also seems to appreciate.

Risks to the “falling dollar projection” include problems in the Eurozone, as well as an unexpected settlement in the US-China trade negotiations. Trump has said he will hold off imposing the 25% tariffs on the remaining $300 billion in Chinese imports until he meets with Xi at the G20.

Tomorrow morning at 8:30 am we have the Nonfarm Payrolls Report. I’ll be watching the “Working Part Time/Economic Reasons” series which is one of my key recession signals. Current expectations for the headline print are 140k-215k. I don’t anticipate any sort of bullish surprise – that said, a bullish surprise would be unexpected by definition, so…heh. What’s a guy to do?

SPX has now rallied for 3 days.  That’s the maximum amount of time that “reaction rallies” usually take, according to Armstrong.  Will traders want to hold SPX over the weekend?  If not – if we get a bearish-looking payrolls print, and equities sell off – we could see gold up around 1350.  Maybe even higher.