Gold chopped sideways today, in spite of the Euro moving up +0.50%. That’s not particularly good news for gold. Forecaster did move higher, up +0.10 to +0.57, but gold in Euros continued to decline. 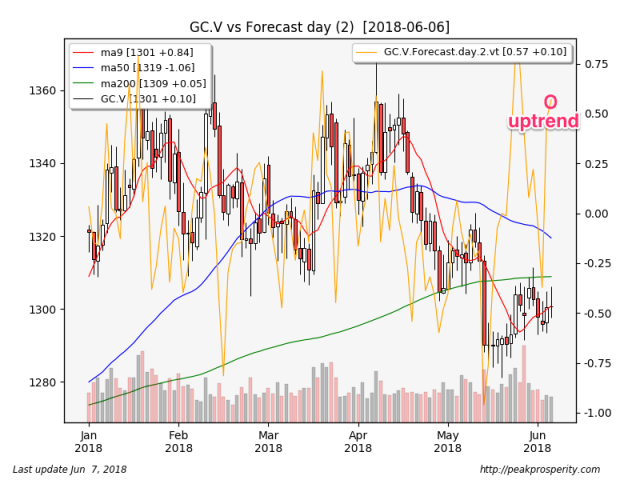 Silver rallied relatively strongly today, which moved silver to the upper end of its recent trading range. Silver forecaster jumped +0.32 to +0.23, which is a buy signal for silver. This caused the silver weekly to generate a buy signal also. Silver is now back above the 50 MA.  If you look at both the 50 and 200 MA lines, you can see they are more or less moving sideways.  This tells you that silver is not in a strong trend right now; forecaster buy & sell signals don’t work well at all when prices move sideways.

COMEX SI open interest rose by 9,232 contracts today. That’s a huge increase – some 21 days of actual silver production. Based on how things have gone recently, I’m guessing that managed money is shorting silver as we move to the upper end of silver’s recent trading range. 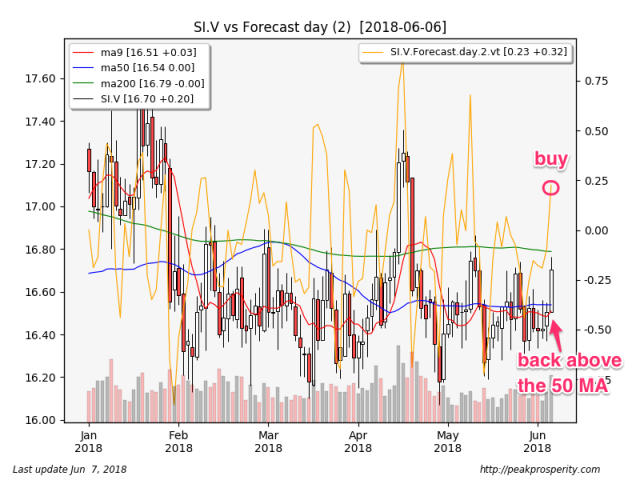 Miners moved up today, with GDX up +0.62% on moderate volume, while GDXJ rose +0.09% on light volume. XAU forecaster jumped +0.46 to +0.34, resulting in a buy signal for the miners. XAU is now back above the 9 MA and is quite close to a move above the 200.  Contrast the XAU with gold and silver; it has moved steadily higher ever since the lows in early February, while gold has fallen, and silver has moved sideways.  That’s a good performance for the mining shares, and it is also fairly unusual behavior. 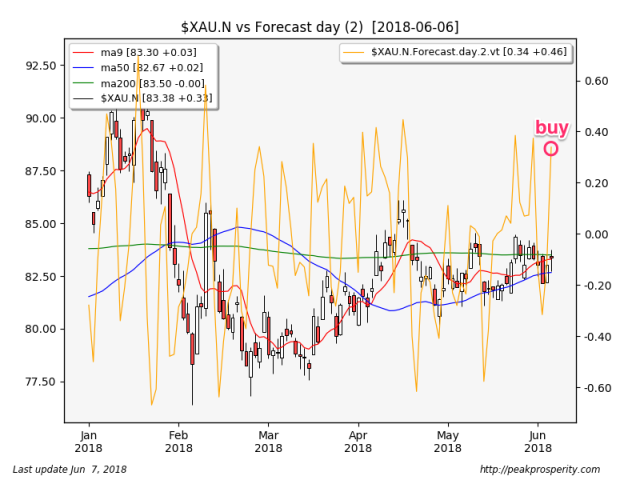 Platinum rose +0.49%, palladium jumped +2.59%, and copper climbed +1.71%. The other metals looked strong, especially the industrial metals. Both palladium and platinum issued buy signals, while copper made a new multi-month high, on very high volume. Copper has broken sharply above its former downtrend line, and is in an uptrend in all 3 timeframes.

Crude fell -0.51 [-0.78%] to 65.00. In spite of the decline, crude forecaster moved up +0.16 to -0.03. Is crude putting in a low? It could be. The spinning top candle was neutral, however. The EIA report was bearish (crude: +2.1m, gasoline: +4.6m, distillates: +2.2m) and crude sold off strongly (down $1.20) right after the report release, but then buyers appeared, which eventually erased much of the losses by the close. While crude didn’t exactly rally on bad news, it did bounce back fairly strongly, which is a positive sign.

Copper has rallied sharply for the past 4 days, up 22 cents or about 7%. What does it mean?  Is the copper breakout a sign of something larger – some sort of inflation trend?  Silver is starting to notice the copper rally; we saw silver rally along with copper today, while gold lagged way behind.

This is something to keep an eye on, certainly.  Rallying copper prices are definitely not a sign of impending recession.  Just the opposite, in fact. 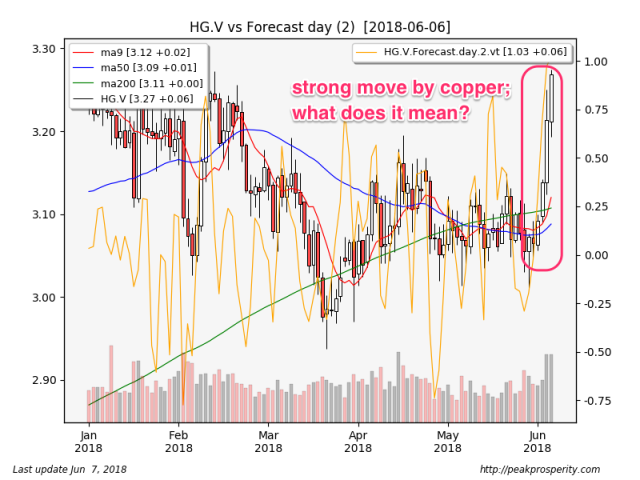