Gold rallied strongly in Asia and London, topping out at 1348.90 around 8:30 am, but then started to fall, losing most of its gains in the next 3 hours. The plunge in gold happened at the same time that the Euro dropped hard – to me, the two moves appeared to be strongly linked. Also, platinum absolutely cratered during that same time period. The high wave candle was mildly bearish (32%), and forecaster dropped hard, but remains in an uptrend – at least for now. Gold remains in an uptrend in all 3 timeframes.  Is this a reversal?  Maybe.

COMEX GC open interest rose +12,267 contracts – or 6 days of global production in new paper. That’s an increase certainly, and not a small one, but I do not think the shorts were the proximate cause of gold’s failed rally today – it looked to be currency-related. 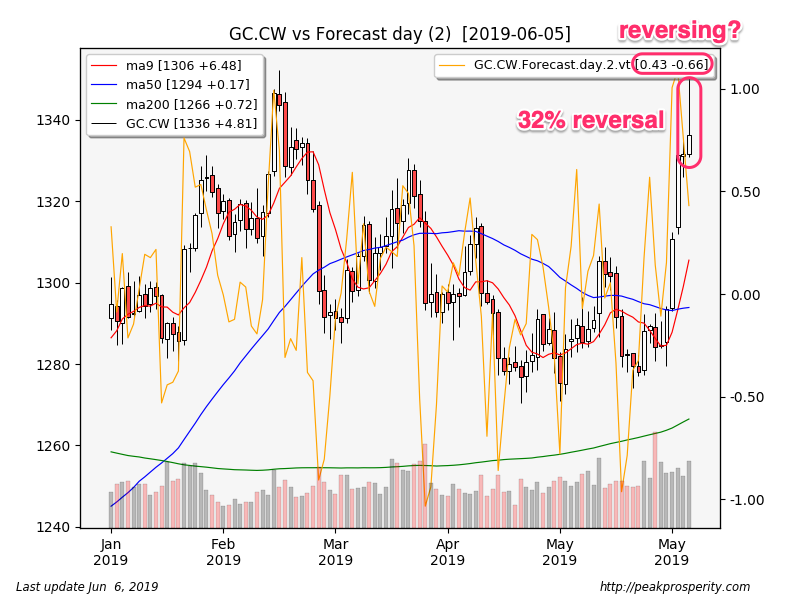 Silver topped out a bit later than gold, hitting 15.04 at around 9:15 am; it then plunged, losing about 30 cents in a couple of hours. The high wave candle was a bullish continuation, and forecaster dropped hard, but remains in an uptrend. Silver remains in an uptrend in all 3 timeframes, although it sure appears to have run into resistance right at the 50 MA.  Reversal for silver?  Candle looks a bit uglier, and forecaster isn’t so happy, but the candle code says no reversal.  Interestingly, the OI didn’t rise either, so the shorts really aren’t jumping on silver the way they did before. 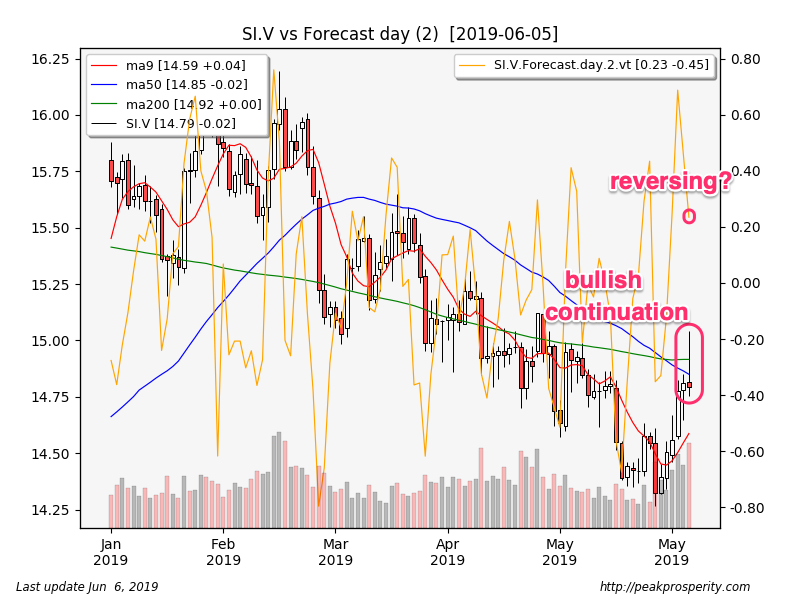 The miners gapped up at the open, and then sold off for the first few hours of the day, recovering a bit into the close. GDX rose +0.18% on very heavy volume, while GDXJ dropped -0.93% on heavy volume. XAU moved up +0.14%, the spinning top candle was a bullish continuation, and forecaster fell, but remains in a very strong uptrend. XAU remains in an uptrend in all 3 timeframes.  Reversal for the miners?  Forecaster looks pretty strong, and the candle code says no. 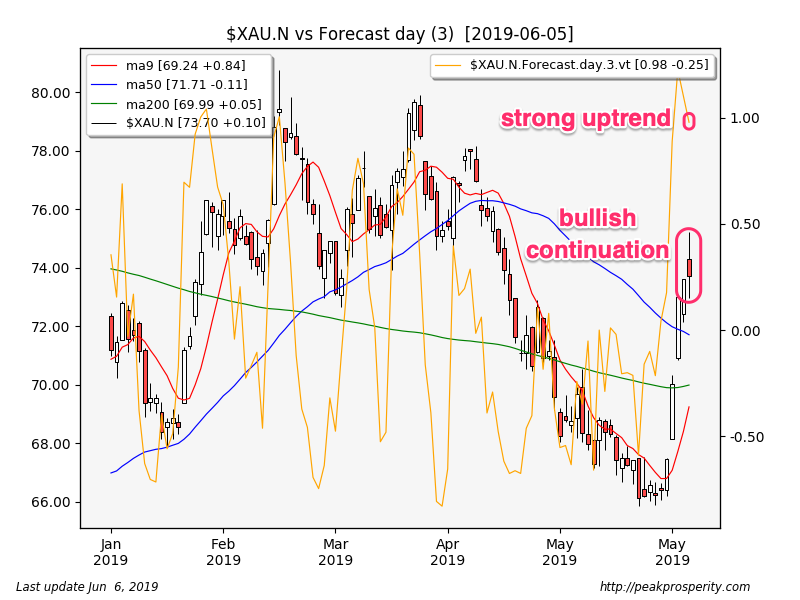 Platinum plunged -2.01%, palladium fell-1.02%, and copper dropped -1.44%. It was a bad day for the other metals, led by platinum, which started its plunge at 8:30 am and didn’t really finish dropping until the close. Platinum looked really horrible today – it didn’t make a new low, but it did make a new closing low – and I suspect it helped cause the sell-off in the rest of the PM group. Copper looked bad too, but the copper plunge started quite a bit earlier – around 6 am. 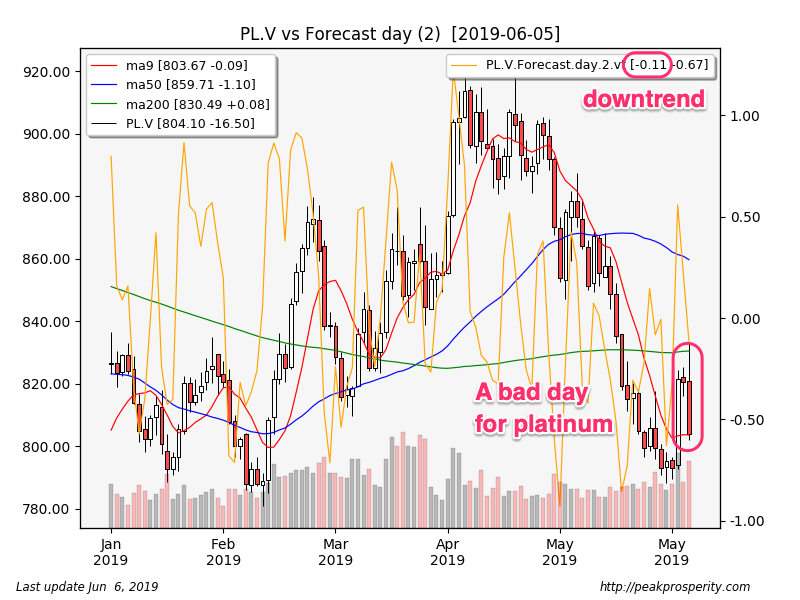 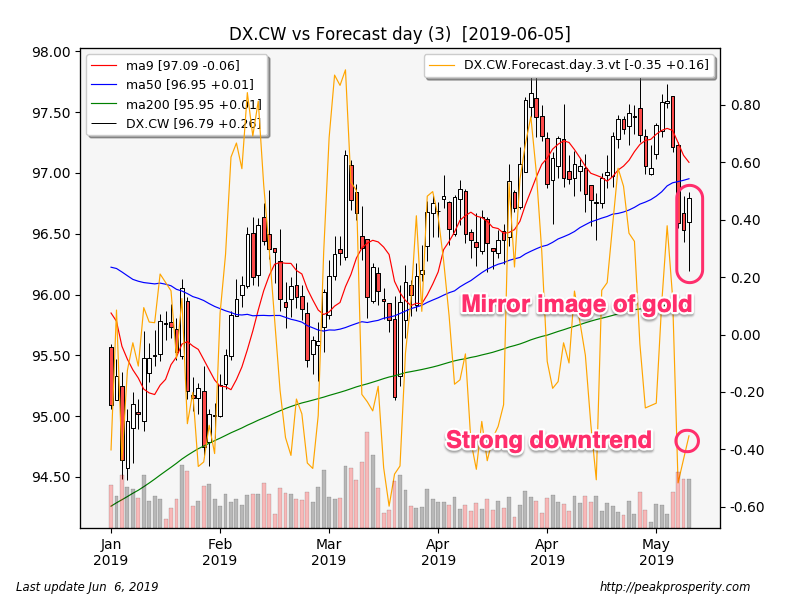 Crude plunged -1.26 [-2.37%] to 51.85. All of the damage happened immediately after a very bearish-looking EIA report (crude: +6.8m, gasoline: +3.2m, distillates: +4.6m); crude sold off hard, making a new low to 50.60. While crude did bounce back, it wasn’t quite enough; the long black candle was a bearish continuation, and while forecaster jumped higher, it remains in a downtrend. Crude remains in a downtrend in all 3 timeframes.  Mixed messages today for crude; forecaster may be reversing, while the candle code says “$50 oil here we come.” 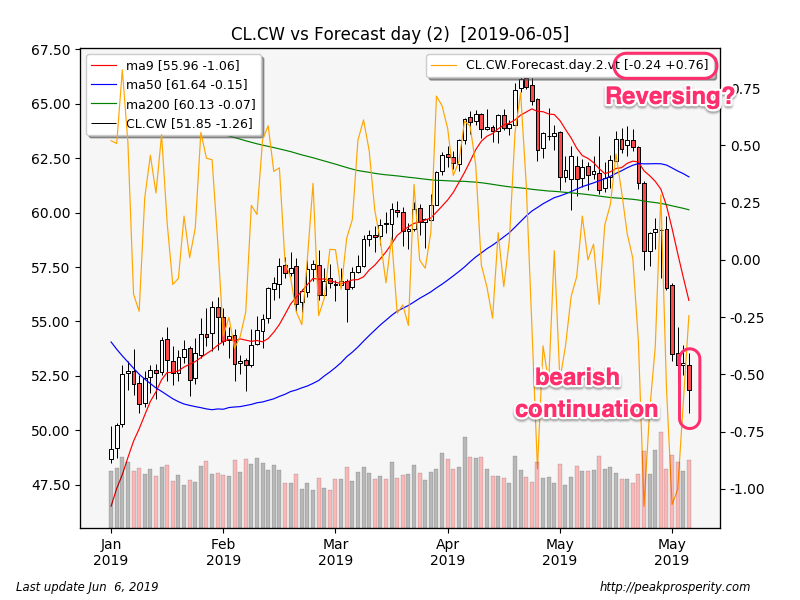 SPX climbed +22.88 [+0.82%] to 2826.15. The spinning top candle was a bullish continuation, and forecaster screamed higher, with SPX moving into a strong uptrend. Still, SPX remains in a downtrend in both the weekly and monthly timeframes.

TLT fell -0.57%, following through off yesterday’s swing high. Forecaster dropped hard, moving TLT into a downtrend. TY actually moved higher, up +0.09%, but it was a failed rally. The long white candle was a bearish continuation, and forecaster moved lower, but remains in an uptrend. TY remains in an uptrend in all 3 timeframes. The 10-year yield was unchanged at 2.12%.

JNK rose +0.25%, following through off yesterday’s swing low. Forecaster moved higher and is now in an uptrend. Even so – the BAA.AAA differential continues to move slowly higher, up +2 bp to 1.02%.

Top for the metals?  The platinum plunge didn’t help at all – neither did the dollar rally.  But although platinum dropped a good 2%, gold managed to stay positive, and silver didn’t really drop all that much.  In fact, gold looked set to hit 1350 today up until the buck reversed.  So what caused that big dollar rally?

Well, there was some news out of Europe; the unelected European Commission recommended a spanking for Italy. They have just noticed that Italy is in violation of the rules: “having a debt level above 60%/GDP.”  (Currently, the Italian debt/GDP is 132%).  Italy has 48 hours to respond.  The Italian government’s only real answer to this is to default on their promises that got them elected, which most likely, is the primary goal of the EC, who do not appreciate populists winning elections.  They do have a second option – issuing a parallel currency.  The outside chance of this happening is probably what caused the Euro to get pounded/the buck to rally.

This feels temporary to me.  I don’t think anything else meaningful has changed.  The likelihood of rate cuts here in the US continues to increase.  Oil continues to drop.  The SPX sector map shows that the high-yielding sectors are attracting the most money.  My guess – its just a guess – is that we might see a dip in the next few days, but that any dips will probably end up being bought.

And if Italy really does issue a parallel currency, I expect that will end up being gold-positive too.