Gold seemed to be strongly affected by currency today, rallying perhaps $10 once the Euro started recovering. While gold didn’t keep all of its gains into the close, it did appear to be well bid today. The forecaster agreed, jumping +0.82 to +0.44, which is a strong buy signal for gold. Gold remains in a downtrend in weekly and monthly timeframes. Next step is for gold to break its downtrend line. 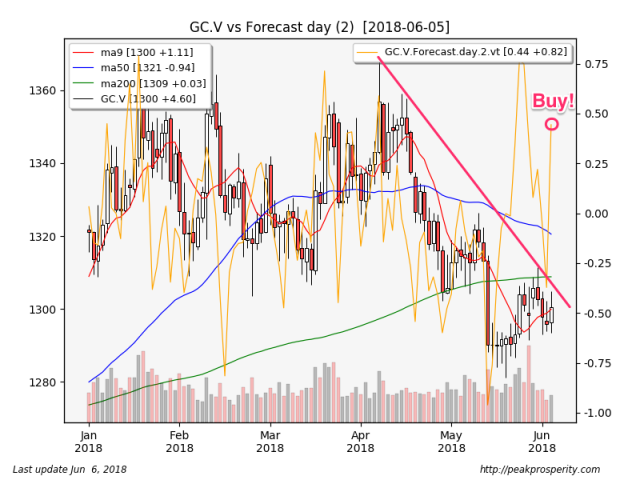 Silver tracked gold, performing a bit better but also tracking the Euro. However unlike gold, silver’s forecaster moved up just +0.09 to -0.10, which is still not a buy signal for silver, but silver is slowly improving. Silver managed to close above the 9 MA today, which is a positive sign. Silver remains in a downtrend in all 3 timeframes. 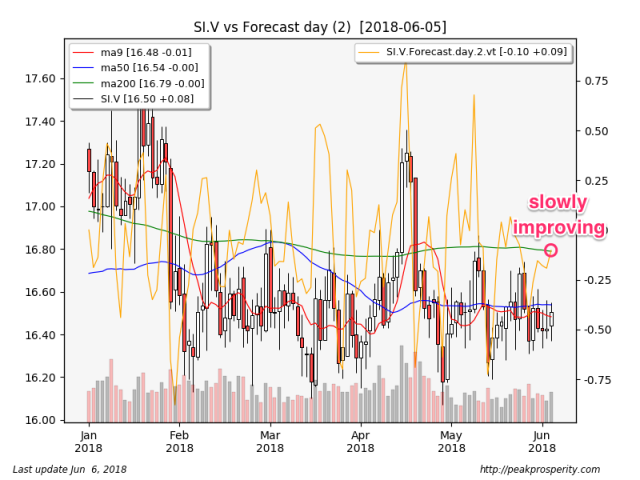 Miners moved higher today, with GDX up +0.72% on moderately light volume, while GDXJ climbed +0.52% on moderate volume. XAU rallied +1.06%; forecaster jumped +0.31 to -0.01, which is on the edge of a buy signal for the mining shares. XAU is back above the 50 MA.  Longer term, XAU:gold ratio bottomed out in mid-March, and has been rising ever since.  That’s generally bullish for gold. 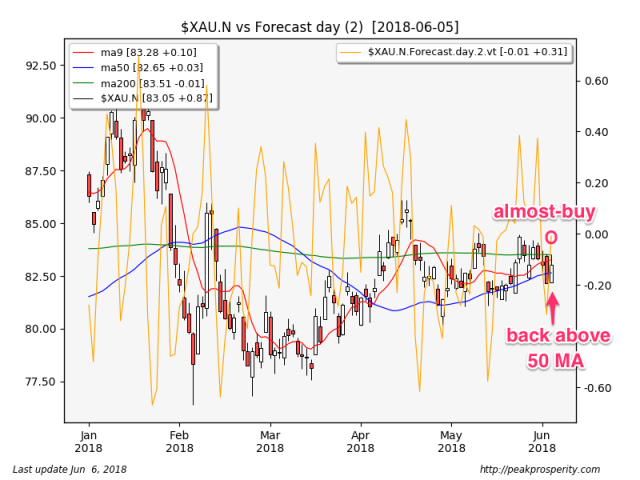 Crude bounced back today, up +0.65 [+1.00%] to 65.51. While the spinning top candle print was only mildly bullish (30% reversal), CL forecaster jumped +0.37 to -0.10. The API report was mixed (crude: -2m, gasoline: +3.7m, distillates: -0.87m), which caused the market to sell off initially, but then bounce back strongly, with a net gain of 20 cents from the report. In addition, there was a report that Trump had asked the Saudis (and OPEC) to produce an extra 1 mbpd – which may have been a quid pro quo for Trump pulling out of the Iran nuclear deal. The extra production should theoretically be bad news for crude, but the market rallied on both bits of news. That suggests to me crude may have sold off far enough, and the low could be in at 64.22.

I like what gold did today – mostly what I saw it do intraday. It avoided selling off when the Euro dropped, and it rallied nicely when the Euro moved higher. It feels as though there are buyers for gold here at these prices – at least for now. TLT may have found support also.

Now let’s see if gold can do it again tomorrow.  Then we might have somethng.