Gold chopped sideways today, making a new high to 1333.80, but it was only a brief spike higher. The long legged doji was mildly bearish (33%), and forecaster moved lower, but remains in a very strong uptrend. Gold remains in an uptrend in all 3 timeframes.

COMEX GC open interest rose +6,696 contracts. Not many shorts are piling in. That’s a good sign. 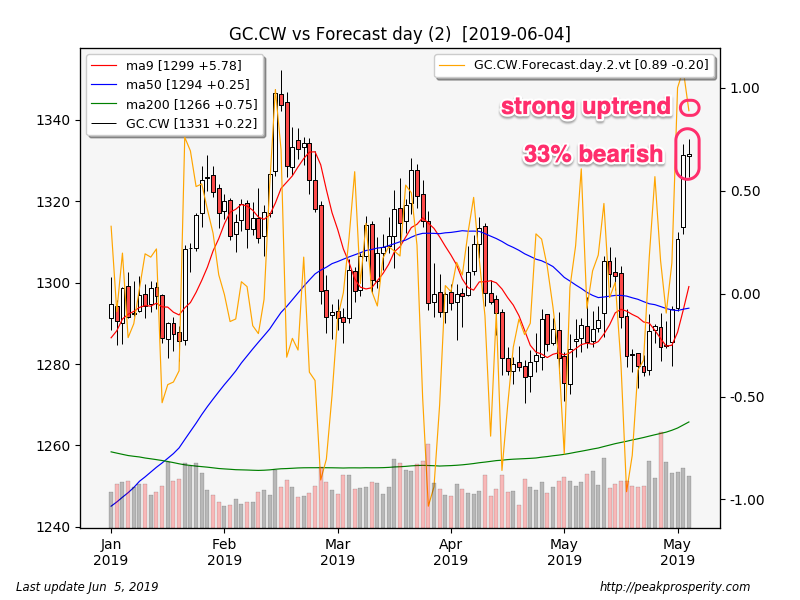 Silver initialy looked a bit more bearish than gold, but seemed to be rescued by a copper rally that started at around 7:25 am – silver ended the day in the green. Silver’s high wave candle was a bullish continuation, and although forecaster dipped, it remains in a reasonably strong uptrend. Silver remains in an uptrend in all 3 timeframes, although it has yet to move above the 50 MA. 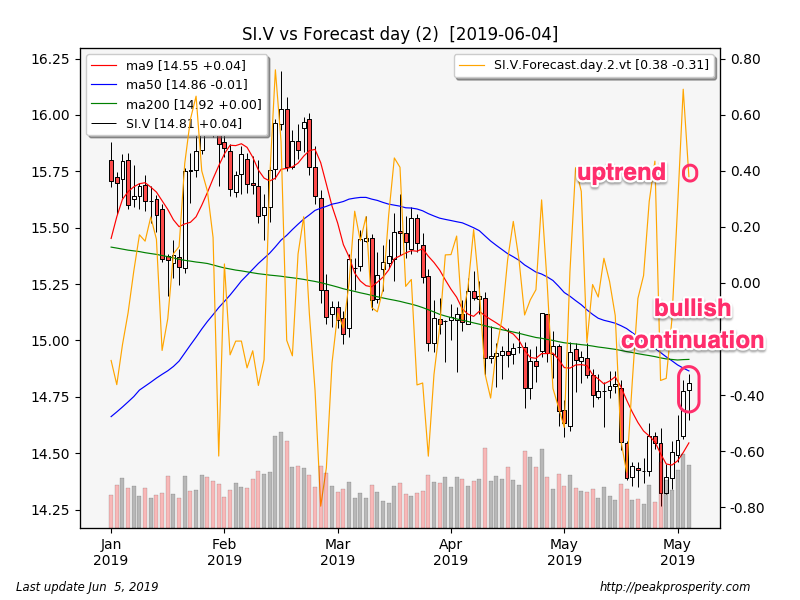 The miners gapped down a bit at the open, and spent the rest of the day moving higher in fits and starts, ending the day at the highs. GDX climbed +0.44% on moderately heavy volume, while GDXJ rose +0.06% on moderately heavy volume also. XAU climbed +0.82%, the closing white marubozu was a bullish continuation, and forecaster barely moved, remaining in an extremely strong uptrend. There was very little selling pressure today in the mining shares – it doesn’t look like anyone is ready to take profits just yet, and in fact, the small morning dip was bought. I take this as a good sign. XAU remains in an uptrend in all 3 timeframes. 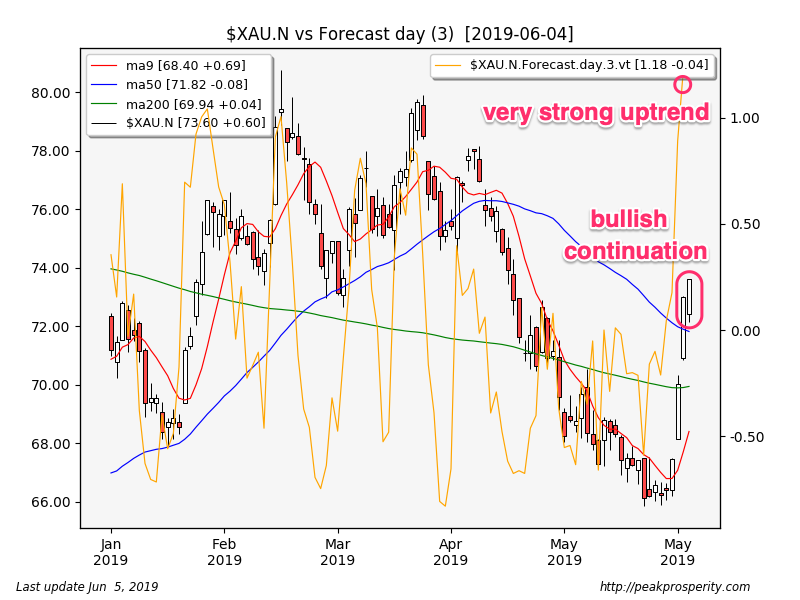 Platinum fell -0.13%, palladium climbed +1.39%, while copper moved up +0.40%. As I said previously, the copper rally seemed to line up with silver’s intraday recovery – mild though it was. Copper actually printed a strong swing low today (67% bullish – very high rating), and forecaster moved back into an uptrend. Platinum just took a bit of a rest, and remains in an uptrend.

The buck fell -0.06 [-0.06%] to 96.53. The buck made a new low today; the spinning top candle was a bearish continuation, and forecaster was largely unchanged, remaining in a very strong downtrend. The buck remains in a downtrend in all 3 timeframes. No reversal today for the buck. That’s good news for PM, generally speaking.

Crude rallied +0.12 [+0.23%] to 53.11. Crude tried rallying today, but failed, due to the bearish-looking API report (crude: +3.5m, gasoline: =2.7m, distillates: +6.3m) at 4:30 pm. The report was good for a 60 cent plunge in crude immediately after it was released. Ouch. The high wave/NR7 candle was unrated, but forecaster jumped higher, but not enough to move into an uptrend. I think we now must wait for the EIA report. Crude does feel as though it wants to rally, but a big EIA build will probably send it down towards round number 50. That said – if the EIA report ends up being horrible, and crude doesn’t collapse, that’s a strong buy signal. Crude remains in a downtrend in all 3 timeframes.

SPX jumped +58.82 [+2.14%] to 2803.27. SPX started its rally in the futures markes overnight – at around 3am – but then continued moving higher after the open in New York. SPX closed at the highs. The white marubozu/swing low pattern was definitely bullish (67%), and forecaster jumped higher, moving back into an uptrend. Today’s rally brought SPX back above both the 200 and the 9 MA. However, SPX remains in a downtrend in both the weekly and monthly timeframes. 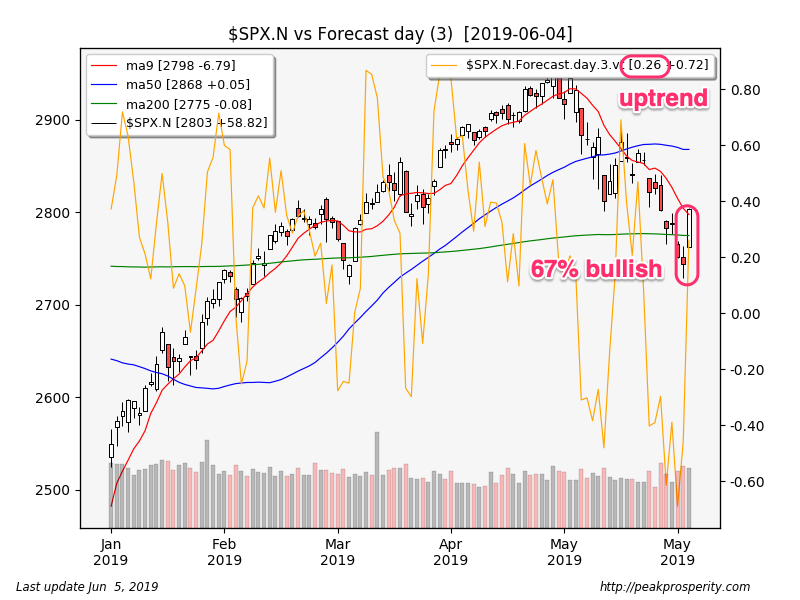 TLT plunged -1.14%, the swing high pattern was bearish (48%), and forecaster plunged into a strong downtrend. TY also fell, losing -0.44%, printing a bearish harami candle (43% bearish – probably the most negative-looking harami I’ve seen), and forecaster dropped too, but remains in a reasonably strong uptrend. TY remains in an uptrend in all 3 timeframes. The 10-year yield rose +5 bp to 2.12.

Is this a top for bonds? It sure could be – at least for a time anyway.

JNK shot up +0.91%, a huge move; the swing low was bullish (57%), and forecaster jumped higher, but it was not quite enough to move it back into an uptrend. Still, JNK’s move today was very strong, supporting the risk-on mood in equities.

CRB rose +0.44%, with 4 of 5 sectors moving higher, led by livestock (+1.63%). Three sectors (livestock, energy, and industrial metals) may be putting in lows after some long declines. That probably accounts for the rally in basic materials equities.

This is probably a near-term low for equities.  The swing low is strong, we have a reversal, bonds appear to have topped out – at least for now anyways – there are hints of a low in metals and energy, and junky debt jumped higher.  Is this more than just a blip in a long journey downhill?  Probably not.  The futures market continues to point to 3 (!) rate cuts by December, and we have that Fed President telling us the Fed should probably cut rates “just in case”.  There is no new happy data signaling a return to growth.

So what about gold?  The candle print is slightly bearish, and gold is a bit overbought (RSI7=82), but the miners appear to be very strong.  What’s more, 3 rate cuts “theoretically” should result in higher gold prices, the rate-cut chances just continue to increase, and the buck continues to move lower probably as a direct result of rate expectations.

So – my guess: no top yet for PM, in spite of the SPX rally.