Gold started rallying at the open in Asia, and it didn’t stop until just before the close in New York. This wasn’t some grand, high-volume 5-minute spike, it was a slow-but-steady climb higher. That suggests steady accumulation by traders wanting to build a position, rather than price manipulation/stop-running by the banksters. This intraday pattern also happened on Friday. I take this to be a very positive sign; someone, somewhere, decided they really, really needed to be long gold. The long white candle was a bullish continuation, and forecaster remains in a very strong uptrend. Gold remains in an uptrend in all 3 timeframes. Gold/Euros actually made a new multi-year high dating back to early 2017. It too remains in an uptrend in all 3 timeframes.

COMEX GC open interest rose 12,992 contracts. That’s 6 days of global production in new paper. It didn’t seem to put a dent into today’s rally – traders appeared too eager to go long for the new paper to matter much at all. 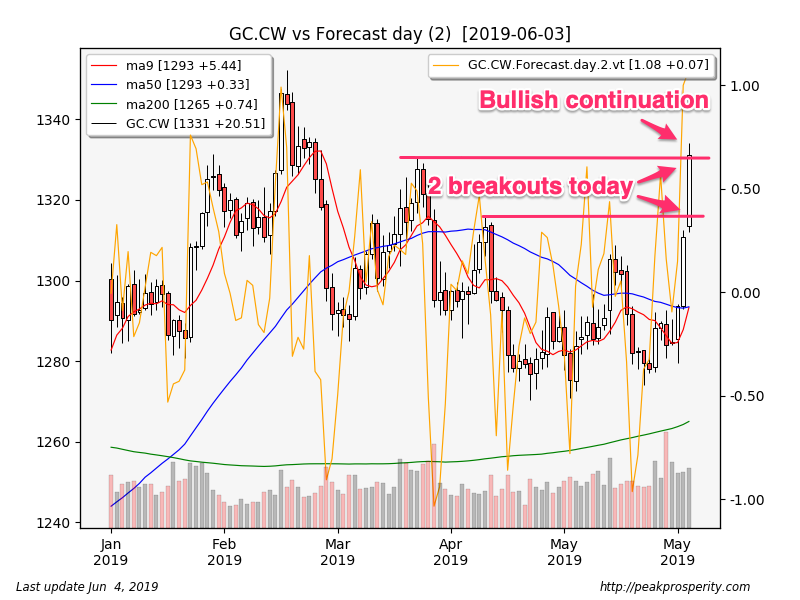 Silver’s intraday track looked similar, but silver’s move was not as strong as gold’s move. The opening white marubozu was a bullish continuation, and forecaster jumped higher, and is now in a strong uptrend. Today’s move also caused the weekly and monthly to flip into an uptrend as well – although this is the first day of the new week and month, so we have a while to go before this becomes final. Silver is now in an uptrend in all 3 timeframes. In addition, silver managed – finally – to break above its downtrend line, but it remains below the 50 and 200 MA lines. Silver remains the poor stepchild.

COMEX SI open interest rose +4,338 contracts, or 9 days of global production in new paper. Shorts are piling in for this rally.

The gold/silver ratio inched up +0.05 to 89.83. This reinforces the concept that the move today in PM was safe-haven-related. In a normal PM rally, silver would have screamed higher, outperforming gold, and the GSR would have dropped substantially as a result. But that’s not what happened today. 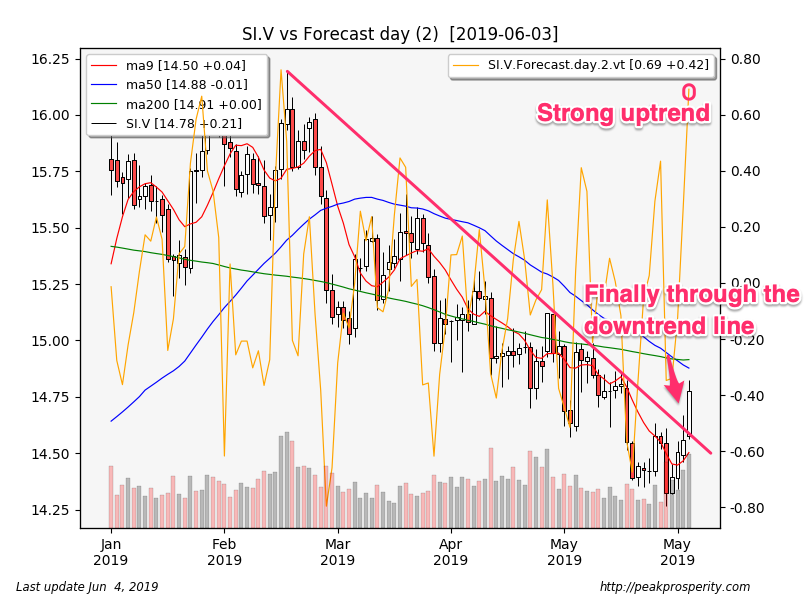 The miners gapped up at the open, and then rallied all day long. GDX rose +4.17% on extremely heavy volume, while GDXJ jumped +5.18% on ridiculously high volume. XAU jumped +4.26%, the white marubozu candle was a bullish continuation, and forecaster moved higher into a very strong uptrend. XAU remains in an uptrend in all 3 timeframes.

On the chart below, you can see the gap up opens for both Friday and Monday, and the 3 days of rally that wiped out 27 days of downtrend. Is this short-covering? Panic-buying? It’s hard to know. As long as gold continues to display this sort of intraday buy-side enthusiasm, I suspect the miners will continue to move higher. 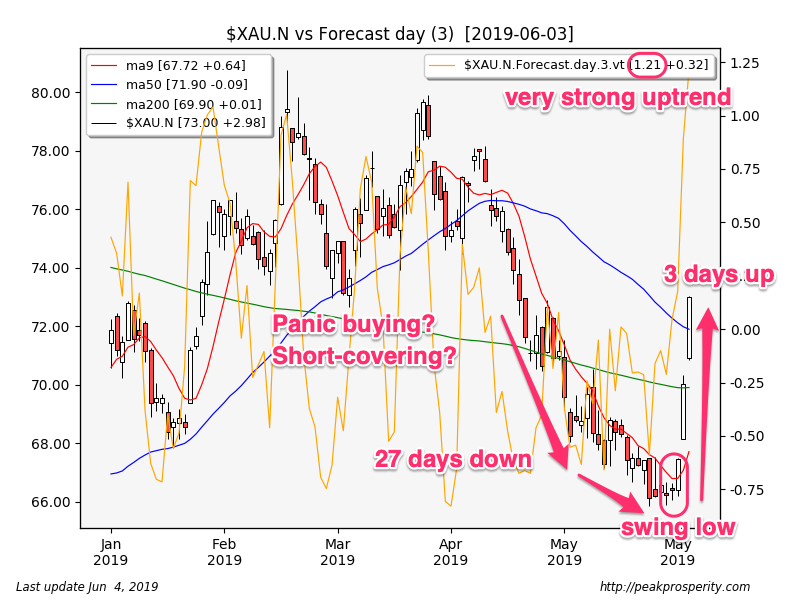 Platinum screamed up +3.62%, palladium fell -0.04%, while copper rose +0.99%. With today’s very strong rally, platinum may have put in a low – all the candle patterns look quite strong, and daily forecaster jumped into a strong uptrend. Platinum is highly correlated to both gold and silver, so a reversal in platinum is actually fairly important to supporting the overall PM rally. 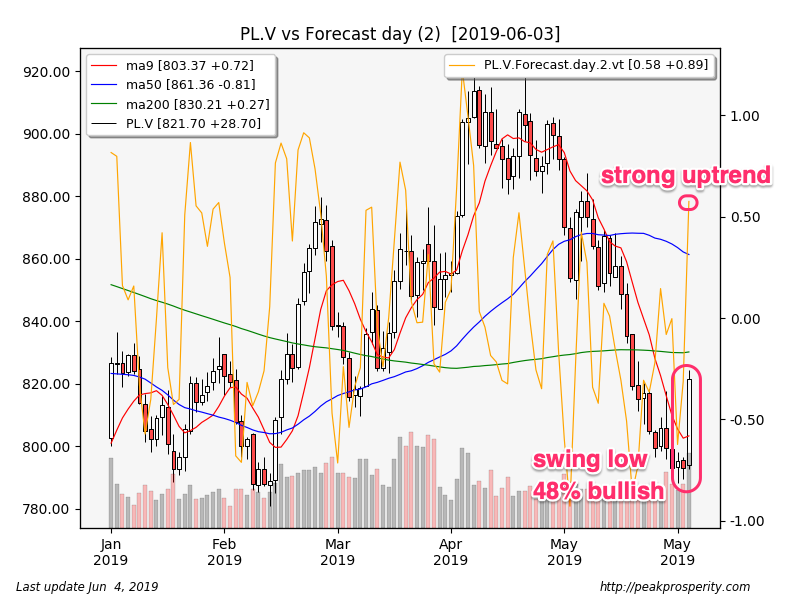 The buck plunged -0.62 [-0.64%] to 96.59, following through on Friday’s swing high. The long black candle was a bearish continuation, and forecaster dropped hard, moving the buck into a strong downtrend. Last week the weekly and monthly forecasters were hinting this might happen; it didn’t make much sense to me, but here we are today. The buck is now in a downtrend in all 3 timeframes. After today’s move, the buck is now back below the 50 MA for the first time in 2 months.

I’m guessing this is associated with the huge increase in rate-cut projections; if the Fed cuts rates, that’s generally dollar-negative. If you are a foreigner, you don’t get paid as well to park your money in dollars, so you tend to leave, all else being equal. 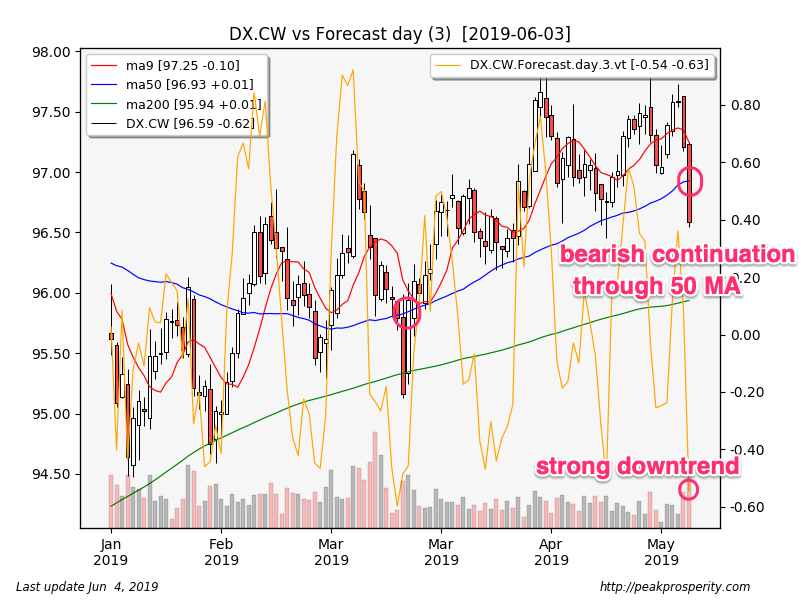 Crude tried to rally today but failed, dropping -0.50 [-0.93%] to 52.99. The spinning top was somewhat bullish (36%), and forecaster inched higher, but remains in a strong downtrend. Crude is probably setting up for the API report out tomorrow. We might see a bounce here if the API report is strong. Crude remains in a downtrend in all 3 timeframes. The reason for the attempted rally, given by oilprice, was a shot by Saudi Arabia to jawbone the price higher:

“And I would like to reiterate my confidence, based on my discussions with several key producers, and on our track record, that we will do what is needed to sustain market stability beyond June,” al-Falih told Arab News in an interview published on Monday.

SPX fell -7.61 [-0.28%] to 2744.45. Trading was fairly choppy – there were several abortive attempts to rally, which largely failed. The spinning top candle was a bearish continuation, and forecaster moved higher, but SPX remains in a fairly strong downtrend. SPX monthly – on the first day – also dropped into a downtrend. That puts SPX in a downtrend in all 3 timeframes.

TLT rose +0.46%, which is yet another new multi-year high. The long white candle was a bullish continuation, and forecaster remains in a strong uptrend. TY also did quite well, up +0.39%; the opening white marubozu was a bullish continuation, and forecaster remains in a very strong uptrend. TY remains in an uptrend in all 3 timeframes. The 10-year yield fell -6.1 bp to 2.06%. A 1-handle is not far away. Money continues to flood into bonds. How long will this continue? It is all driven by the rate cut expectations, and – probably – by the assessment that a recession is either not far away, or is actually here right now.

JNK fell 0.37%, the doji star candle was a bearish continuation, and forecaster remains in a strong downtrend. Last Friday, the BAA.AAA differential rose 1 bp, which puts it at 1.00% exactly. While it continues to climb, it is not doing so very rapidly. Credit worries remain relatively under control. This is because the money racing into bonds is doing so into both AAA and BAA issues in relatively equal measure.

So the real thing we want to know is, how durable is this PM rally, what is it based on, and can we expect it to continue.  These are the tough questions.  So what do we know?

The longer term patterns suggest that gold likes the prospect of falling rates.  Rate-rise chances have fallen precipitously over the past few trading days, and gold has rallied probably in response to that large, recent move.

Gold also tends to be the anti-SPX; for that reason, I suspect the gold price was recently suppressed by Trump & CO in order to help him in his negotiations with China.  (Its bad for your image if the stock market plunges whenever you announce something, and by suppressing gold, you get everyone to continue thinking all is well.)  Since the negotiations are largely over for now, the motivation to suppress is lower.

Gold has also been aligned with the bond market in the past; this is partly about rates, and partly about safe-haven.  That may be back in play once again.  However bonds are now dreadfully overbought (RSI=93, a very high rating); can they continue to move even higher?  Maybe.  Long enough to move gold through 1350 resistance?  That’s the question.

Right now things seem lined up for gold to move higher and re-test 1350, but the bond market rally is definitely overdone at this point, and if it retraces, it could take gold back down with it.  There are no specific technical signs that the bond rally will take a break soon, but I always get nervous when the RSI levels move into the 90s.

Here’s something – perhaps a sign of a near-term top in bonds – a contrary indicator, a potential sell-the-news event from the St Louis Fed President:

Bullard concluded: “A downward policy rate adjustment may be warranted soon to help re-center inflation and inflation expectations at target and also to provide some insurance in case of a sharper-than-expected slowdown.”

Gold is getting its revenge. Try as he might Mr. Tariff Man can’t dominate all the headlines all the time. Everyone once in a while something more important than the Trump Man-Baby Show should take center stage.

Gold has moved more than $50 in just under three trading sessions, blowing past near term resistance and, more importantly, reminding everyone just how quickly the reserve asset of the world economy can call bullshit on the proclamations and machinations of the morons who think they run the world. 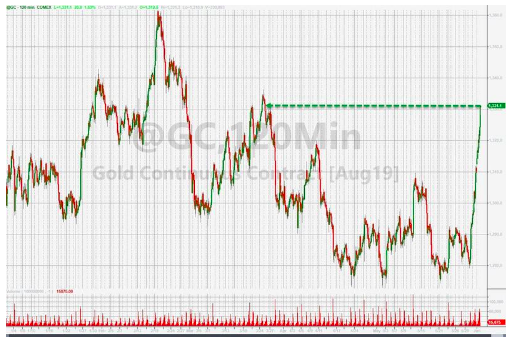