Gold chopped lower in a fairly narrow range today, closing just a buck or so above the low.  Gold’s candle print was a long black/bearish continuation, gold made yet another new low, and gold forecaster rose +0.14 to -0.33, which suggests that the downtrend is slowing. That previous low is still waiting at 1238. Gold’s RSI-7 is down to 11, which is very oversold.  To provide some perspective, over its entire 10,922 trading day history, the GC contract has only spent 57 days at or below RSI-7 11. This suggests gold “should” bounce soon.  Theoretically anyway. 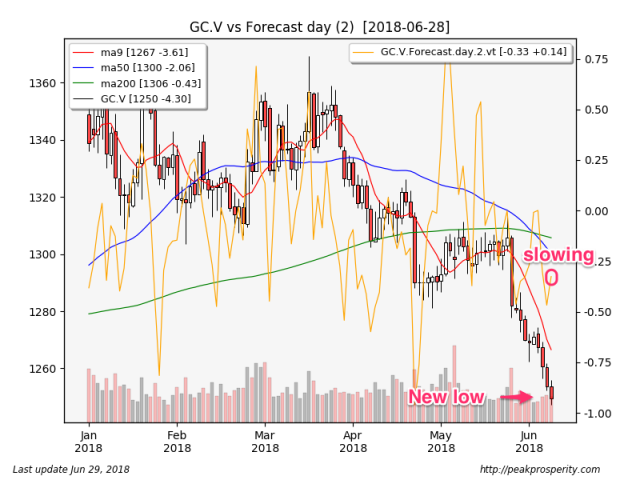 Silver chopped sideways until about 7 am, after which it sold off for much of the rest of the day, making a new low to 15.96.  As mentioned, the contract roll added 10 cents to the price – so instead of rallying 2 cents, silver really lost about 8.  Most of the TA for silver was thrown off by this effect.  Normally silver doesn’t have such a strong contango. 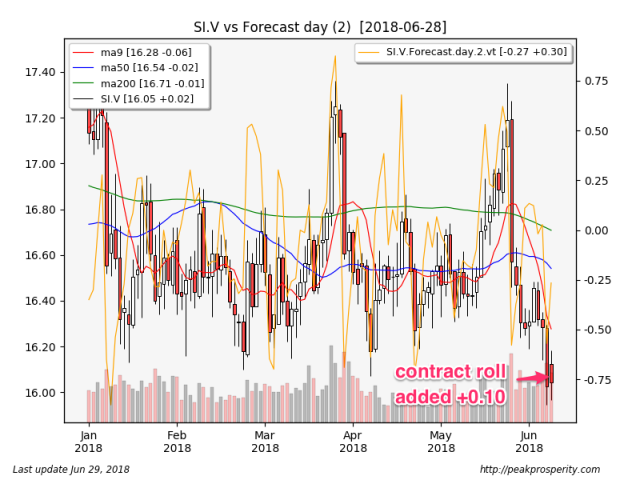 Miners rallied today, with GDX up +0.55% on moderate volume, while GDXJ moved up +0.19% on moderately light volume. That’s a decent performance on a day where the metals fell. XAU edged down -0.13%, which took the forecaster down -0.02 to -0.55. Miners remain in a downtrend, but the rallies in the mining ETFs might be forecasting a rebound in the metals. They do tend to lead.

The GDXJ:GDX ratio fell, but the GDX:$GOLD rose. That’s neutral. 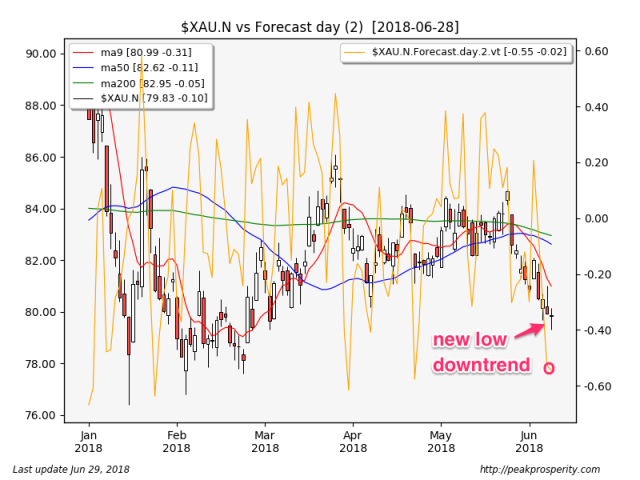 Platinum fell -1.06%, palladium dropped -0.74%, and copper moved down -0.97%. Those are two new lows for both copper and platinum. Copper’s decline over the last few weeks is really remarkable. Clearly the other metals are having a difficult time right now.

The buck rallied +0.13 [+0.13%] to 95.10, making a new closing high today comfortably above round number 95.  All systems go for the buck, all 3 timeframes.  Things are slowing down a bit on the weekly timeframe, but the trend remains up.

Crude rallied +0.98 [+1.36%] to 73.28, breaking out to a new high, following through after all the oil-positive news this week. In fact, oil is looking stronger than oil equities, which suggests to me that perhaps oil is getting a bit ahead of itself on the enthusiasm about Iran.  Forecaster is telling us that the uptrend is slowing.  Uptrend in all timeframes – the monthly looks particularly strong. 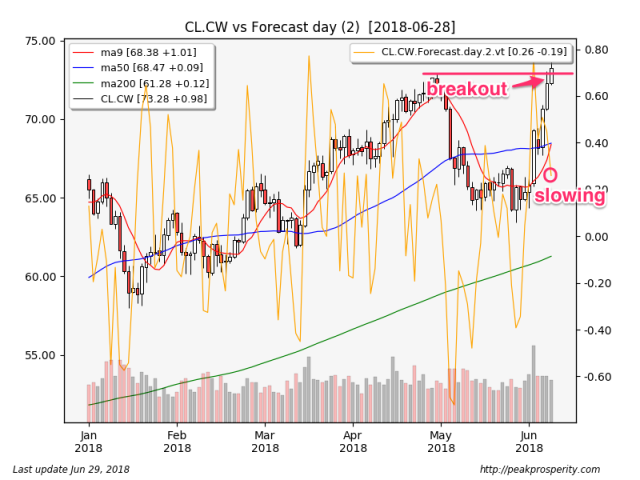 JNK fell -0.36%, dropping sharply and making a new low. This is a divergence from normal behavior, and a fairly dramatic one. Normally JNK rises when equities rise, but this was a bad day for JNK. HYB didn’t move much, so this was something specific to junk debt.

All the metals continued to move lower today; while hope says that gold is nearing a low, so far it isn’t evident on the charts – at least not on the metals anyway.  Perhaps the miner ETFs are hinting that a low is near.  Hmm.  One last chart.  This one, the GDX:$GOLD chart.  It is showing a bullish cup & handle pattern, and today it just broke out.  This is strongly telling us that “someone” thinks the miners are a good deal at these prices.

This could be a tell.