Crude was the big mover today, jumping +2.49 [+3.65%] to 70.68 on news that Trump was asking our allies (with “ask” a interesting word choice) to stop buying oil from Iran. Failure to comply with the “ask” would result in US sanctions against them – not Iran, our allies! This could take 1 mbpd offline, at a time when the oil markets are in deficit. Here is what Nick Cunningham over at oilprice had to say:

The U.S. government is calling on its allies to zero out imports of oil from Iran by November 4, or else face sanctions, and Washington is leaning towards granting no waivers at all. An official from the U.S. State Department said on Tuesday that it had plans to follow up on the matter with Turkey, India and China, even as the U.S. is trying not to “adversely impact” these countries, Bloomberg reports.

The effect of knocking 1 mb/d of supply offline by the end of the year is hard to overstate. The oil market is already in a deficit situation, with inventories continuing to decline. Venezuela is expected to continue to post production declines, likely losing several hundred thousand barrels per day of supply by the end of the year, at the very least. Surprise outages from Libya, Nigeria and, most recently, Canada came out of nowhere over the last few weeks. Together, all of the disruptions more than overwhelm the 600,000 bpd that OPEC+ is set to add back onto the market.

Now, knowing Trump, the long deadline (Nov 4th) and the potential severe impact is all focused on giving him leverage in the Iran nuclear deal negotiations, but after the imposition of tariffs, the market – and the Iranians – can see he isn’t bluffing. This may well bring oil right back up to the mid-70s.

I’m thinking of putting Trump himself onto my list of black swans.  But I’m not sure what good it would do – the stuff he comes up with isn’t all that predictable.

Gold bounced around in a fairly narrow trading range, attempting to rally after the close in Asia but ultimately failing. The candle print was a bearish continuation, and gold forecaster plunged -0.31 to -0.31, which was a sell signal for gold. At this point in the decline, we have to pull back to the weekly chart to see where support might be – its around 1238, set back in December. GC.EUR also continues to fall.  No good news for gold at all; the RSI-7 for gold is currently at 16, which is quite oversold. 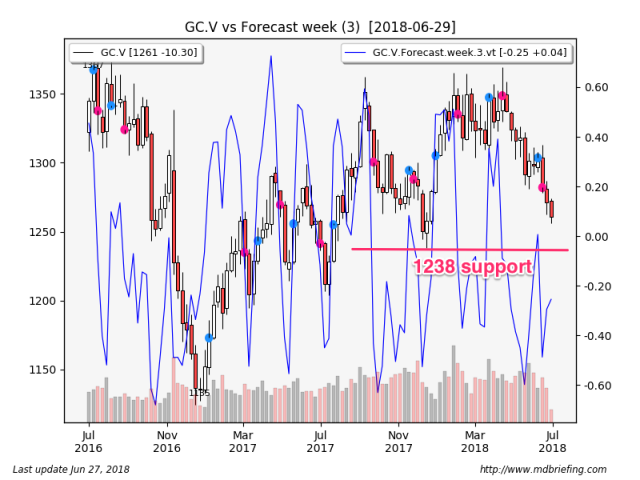 Silver sold off along with gold, making a new low to 16.14, but rebounded fairly strongly, almost getting back to even. The candle print was a takuri line, which had a 31% chance of marking the low. Silver forecaster ticked higher up +0.05 to +0.03, which is a tentative buy signal for silver. Volume on the day was heavy, so today’s candle might actually be a low.  It will probably depend on what the rest of the metals do in the next few days. 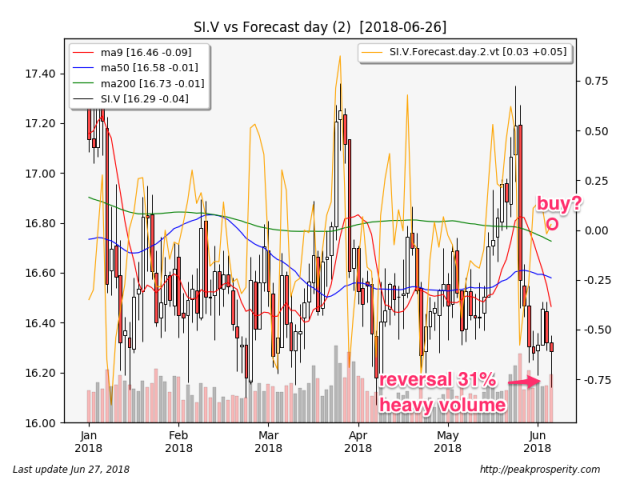 Miners fell, with GDX off -0.27% on light volume, and GDXJ dropped -0.34% on light volume also. These marked new lows for both ETFs, and the candle prints were both bearish continuations. XAU forecaster fell -0.27 to -0.30.  XAU also broke below its previous low, which is a bit of a danger sign. 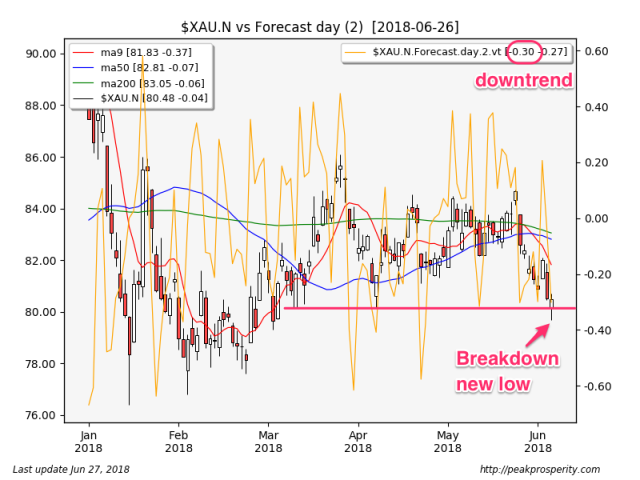 Platinum rose +0.02%, palladium rallied +1.93%, and copper moved up +0.32%. Is the decline in copper coming to an end? Certainly the forecaster is almost back to even, rising +0.11 to -0.04. Palladium printed a bullish engulfing (52% bullish reversal) and issued a buy signal, while platinum was more neutral. We might be getting closer to a low in the metals – it is possible that the rally in crude is helping.

JNK was unchanged also; it remains in a downtrend, although the pace is slowing.

Boy, if its not one thing, its another.  Last week, tariffs.  This week, Iran.  What’s next week?

It feels as though the pace of events is starting to pick up.  It is getting harder for me to keep track of all the balls that are in the air at any one moment.  It is unfortunate that gold doesn’t seem to be the beneficiary of any of it.