Gold rallied in Asia, hitting a new high of 1442.90, but the rally mostly failed, with most of the selling pressure happening in the afternoon in New York. The high wave candle was a bullish continuation, and forecaster moved lower but remains in a strong uptrend. Gold remains in an uptrend in all 3 timeframes. Gold’s RSI7 remains at 94; you can see the immense selling pressure right now that comes along with such a high RSI; the renewed gold mania meets the commercial shorts resulting in extremely high trading volumes and almost no movement. At this point, commercials are playing the odds, which suggest that we are probably at or near the peak price in gold for this particular move.

COMEX GC open interest rose +17,083 contracts, or about 8 days of global production in new paper. The shorts just continue to pile in. 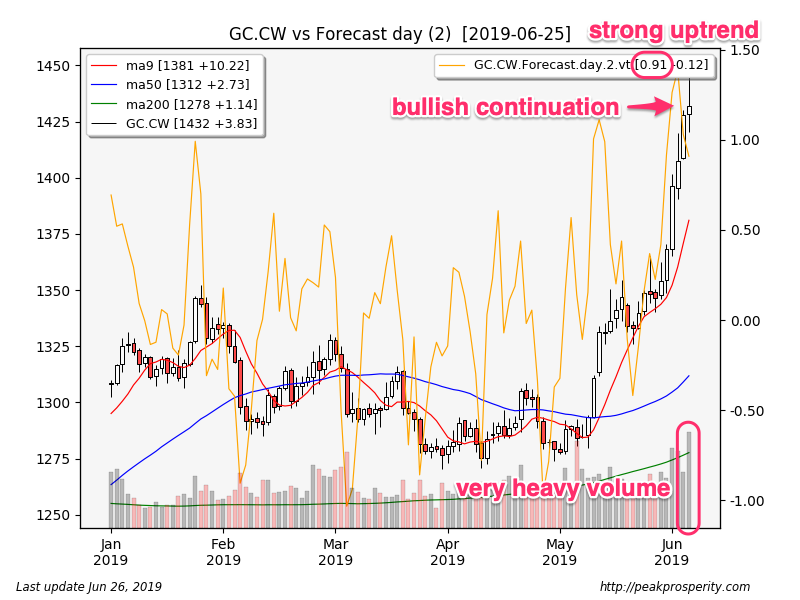 Silver chopped sideways-to-lower today, ending up closing near the lows. The spinning top candle was mildly bearish (35%), and forecaster was unchanged – just above neutral. Silver remains in an uptrend in all 3 timeframes. Silver underperformed gold once again today. 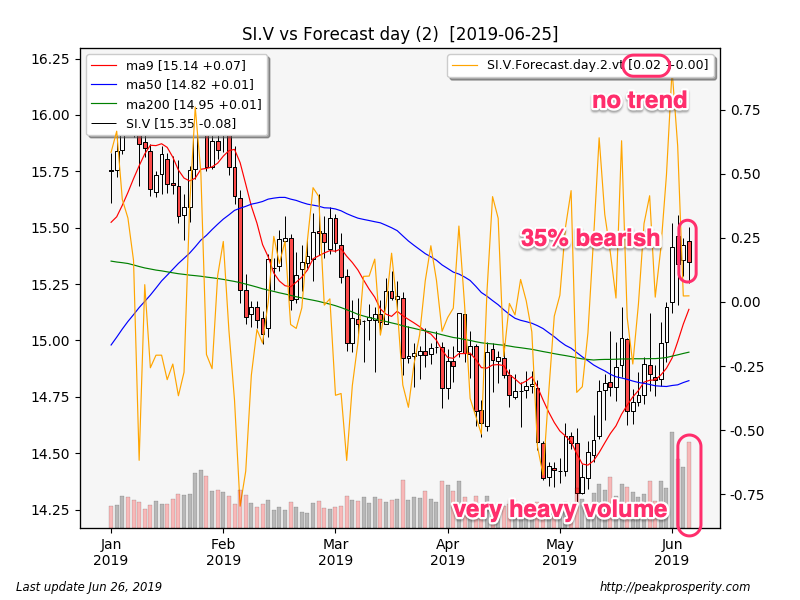 The miners opened higher, then sold off in the morning, tried to rally, and then sold off some more, bouncing back somewhat in the afternoon. GDX fell -2.06% on extremely heavy volume, and GDXJ dropped -1.99% on extremely heavy volume also. XAU fell -1.32%, the long black candle was mildly bearish (31%), and forecaster dropped hard, dropping XAU into a much more moderate uptrend. XAU remains in an uptrend in all 3 timeframes.The miners saw very heavy selling pressure today; both GDXJ and GDX candles were “dark cloud cover” patterns (39% bearish), and XAU was very close to one as well.  If not for the rally at end of day, it would have been bearish engulfings across the board.  Summarized – lots of selling pressure, maybe a reversal, which is ultimately not too surprising with yesterday’s all time record high RSI-7 of 95. 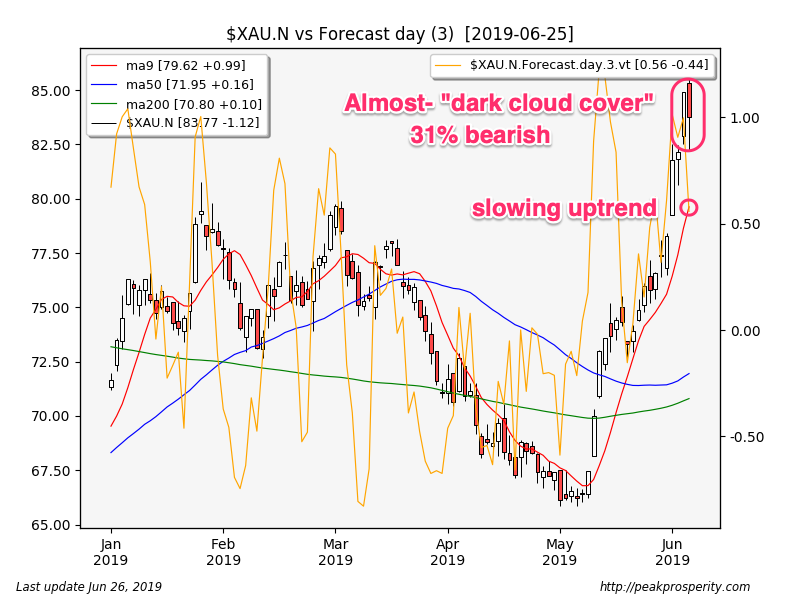 Platinum fell -0.55%, palladium dropped -0.51%, while copper moved up +0.85%.  The copper rally was a curious move with the rest of the markets suggesting risk off.  Perhaps that’s due to the imminent meeting between Trump and Xi at the G-20 meeting.

The buck rose +0.15 [+0.16%] to 95.59. The long white candle was bullish (41%), and forecaster moved higher, but remains in a strong downtrend. Could this mark a near-term low for the buck? Maybe. The buck remains in a downtrend in all 3 timeframes. The rising dollar seemed to roughly coincide with falling gold prices today.  If the buck rallies further, that will probably help cause a correction in PM. 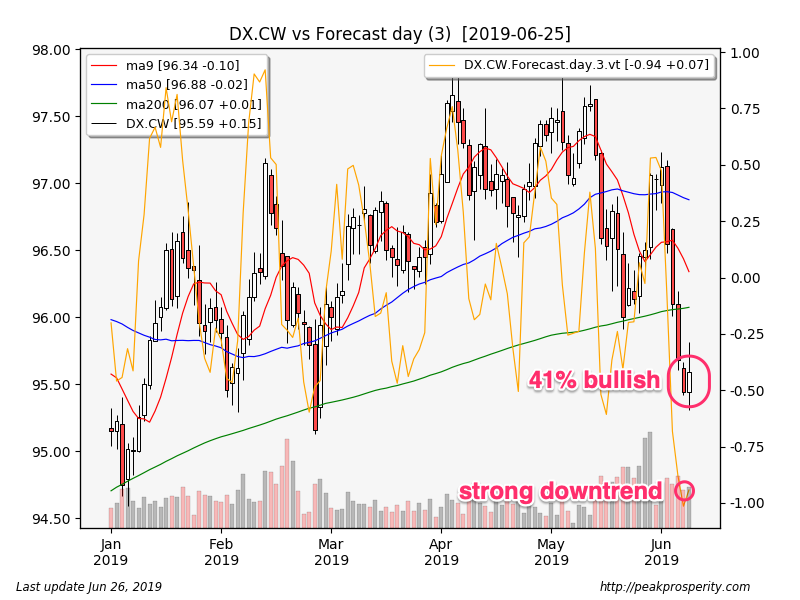 Crude rallied +1.02 [+1.77%] to 58.79. Crude mostly chopped sideways until the surprisingly positive API report at 4:30 pm (crude: -7.6m, gasoline: -3.2m, distillates: +0.2m); the report caused a 90 cent rally and a new high. The closing white marubozu was a bullish continuation, and forecaster inched higher and remains in a moderate uptrend. Crude remains in an uptrend in both daily and weekly timeframes.

Trump tweeted today that while “the wonderful Iranian people are suffering, and for no reason at all”, the leadership of the country spends its money on terror, and that “any attack on anything American will be met with great and overwhelming force. In some areas, overwhelming will mean obliteration.” The tweet did not seem to move prices. I think the market is used to Trump at this point.

SPX plunged -27.97 [-0.95%] to 2917.38. Prices started falling at the open, and they didn’t stop until the close. The strong line candle is somewhat bearish (39%), and forecaster dropped hard, moving SPX into a downtrend. SPX remains in an uptrend in the weekly and monthly timeframes. Today’s drop was quite strong,

TLT rose +0.31%, moving higher into its uptrend. TY climbed +0.15%, the short white candle was a bullish continuation, and forecaster moved higher into a modest uptrend. This was a new closing high for TY, which also remains in an uptrend in all 3 timeframes. The 10-year yield fell -2.7 bp to 1.99%. Yield looks set to break down to new lows.

JNK plunged -0.37%, the long black candle was a bearish continuation, and forecaster dropped, moving JNK into a downtrend – which looks quite similar to what has happened in equities. JNK is signaling risk off. -0.10%, this is a swing high for JNK, and forecaster dropped hard, leaving JNK in just a slight uptrend. The BAA.AAA differential fell -1 bp yesterday to 1.05%; it remains in an uptrend.

So did something cause the equity market sell-off today?  I don’t know.  There were a few interesting reports, but they didn’t strike me as any sort of cause:

The New Home Sales report was distinctly bearish for housing: supply rose 0.5 to 6.4 months, and the median price dropped by a shocking 8% m/m (from 335k down to 308k).  This could be partly because of a large 25k increase in median prices in April; perhaps with the new lower mortgage rates, the new home sellers tried an April price increase that didn’t stick.  The number of new homes sold fell 10% m/m too.  It was a terrible-looking report, especially if you consider how the 30-year mortgage rate was roughly 4.1% in May, down 50 bp from where it was last May.

Ultimately, I’m not sure why equities corrected today, but the selling was brisk and the market moved in a sequence of lower highs and lower lows.

Gold has climbed $160 over the past two months, trough to peak, and rise through 1400 was accompanied by a brisk move lower in the buck, which has probably served to supercharge gold’s breakout to new highs.

While gold continues to look strong on the daily chart, the miners are definitely suffering much stronger selling pressure.  But for a late-afternoon rally, the miners would have printed some nasty-looking bearish engulfing patterns.  And in early Asia trading, gold is down $17 to 1410.  Is the top in?  Perhaps it is, for now.  If the buck rallies, that will just add fuel to the fire.

The question for me is, how far will the correction go?  When will the buyers appear?  We could easily drop back down to 1382, the point of the breakout.  That sort of thing happens fairly often.  Buyers should theoretically appear there, as “former resistance becomes support.”  We’ll just have to see.  If the equity market continues falling, that should definitely help gold.

As for silver – well, the most hopeful thing I can say is, “it is not yet silver’s time.”  When will that time come?  I have no idea.  Once again, silver is the weakest item in the PM complex.