Gold moved steadily higher for most of the day, closing relatively near the highs. The opening white marubozu was a bullish continuation, and forecaster moved lower, but remains in a very strong uptrend. Gold remains in an uptrend in all 3 timeframes.  Gold set another new 6-year high today.  Gold is now very overbought (RSI7 = 94); this has happened only 7 other times since the start of the series in 1975, with 5 of those times back in January 1980. 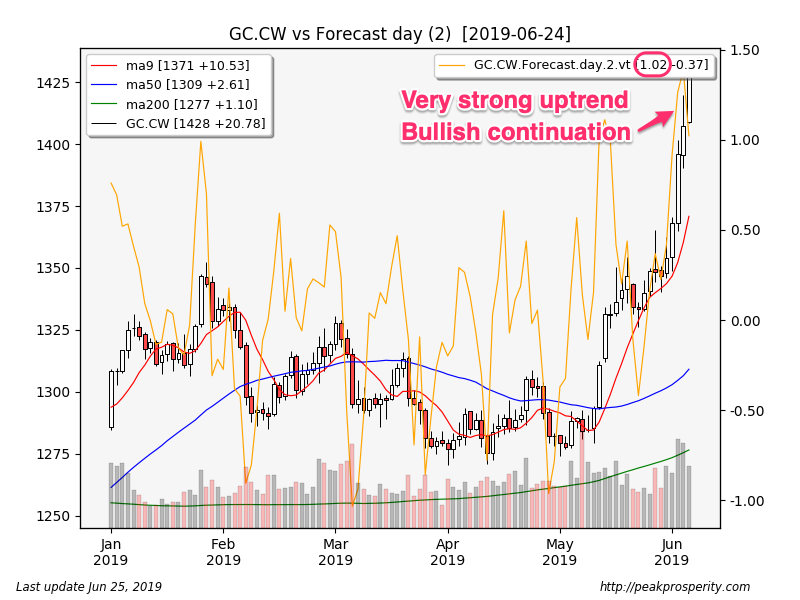 Silver chopped sideways for half the day, then moved higher after the US market opened, closing near the highs. The short white candle was unrated, and forecaster dropped hard, just barely remaining in an uptrend. Silver remains in an uptrend in all 3 timeframes – but that daily is just about to reverse. Silver severely underperformed gold today..

The gold/silver ratio rose +0.75 to 92.13. Here is why I said silver severely underperformed gold. This is another 27-year high in the ratio. The silver mining shares are actually doing well, but the metal itself continues to look weak. 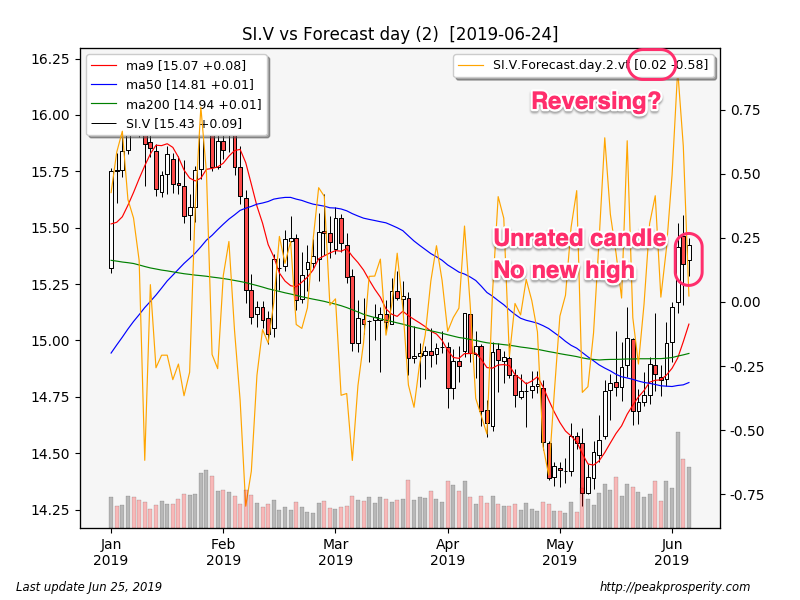 The miners rallied from the open to the close. GDX rallied +3.81% on very heavy volume, while GDXJ climbed +3.58%on extremely heavy volume. XAU climbed +3.35%, the closing white marubozu was a bullish continuation, and forecaster inched higher and remains in a very strong uptrend. Today’s close managed to climb above the high set mid-year in 2018. The miners continue to look very, very strong here, but they are also very overbought: RSI7=95. This is the most overbought XAU has ever been – dating back to the start of the series in 1983. XAU remains in an uptrend in all 3 timeframes. 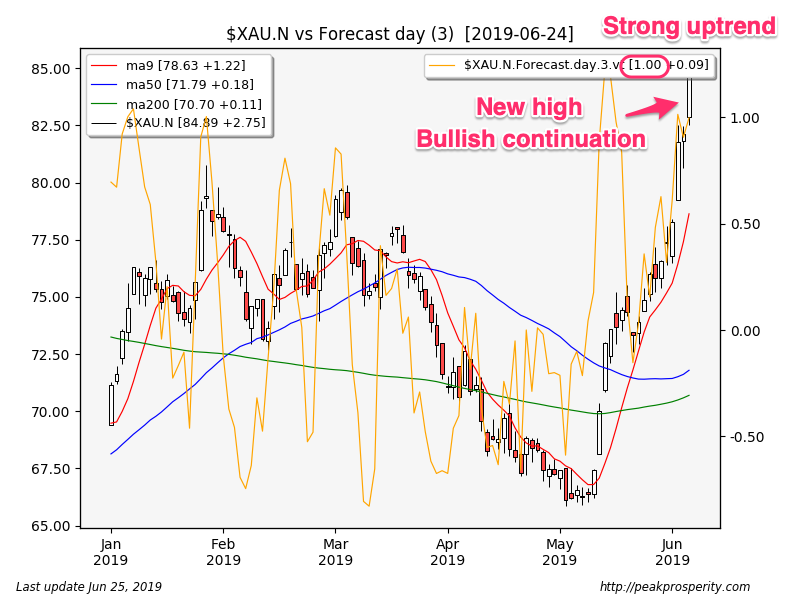 Platinum rose +0.62%, palladium jumped +2.25%, while copper moved up +0.20%. Palladium appears to be getting ready to break out to a new all time high, while platinum and copper are working hard at putting in a low.

The buck fell -0.24 [-0.25%] to 95.44. The short black candle was a bearish continuation, and forecaster fell further into a very strong downtrend. This marks 4 days straight down for the buck. The buck remains in a downtrend in all 3 timeframes.

Crude moved up +0.13 [+0.23%] to 57.77. Crude fell during the US session, but recovered by end of day. The northern doji candle was a bullish continuation, but forecaster fell, remaining in a reasonably strong uptrend. Crude remains in an uptrend in both daily and weekly timeframes. Instead of attacking Iran for the drone shoot-down, Trump increased the sanctions instead. He also suggested that perhaps it was time for other countries to protect their own tankers. Why do we go to war over over everyone else’s tankers for free anyway?  Just a thought anyway.

Article on shale at oilprice: a former shale executive comes clean about just how much value destruction shale has been to shareholder capital.  We all know this – we have known it for years, but to hear it said by a shale exec is a nice confirmation. https://oilprice.com/Energy/Energy-General/Shale-Pioneer-Fracking-is-an-Unmitigated-Disaster.html

TLT rose +0.75%, erasing yesterday’s loss. TLT has moved back into an uptrend. TY climbed +0.31%, the long white candle was a bullish continuation, and forecaster remains in a slight uptrend. This is a new closing high for TY. TY remains in an uptrend in all 3 timeframes. The 10-year yield fell -4.7 bp to 2.02%.

JNK fell -0.10%, this is a swing high for JNK, and forecaster dropped hard, leaving JNK in just a slight uptrend. The BAA.AAA differential was unchanged.

The gold rally just kept on going today – traders wanted onto the gold train, and seemingly weren’t afraid to climb on board with the nosebleed RSI values we have right now.  At the same time, if you have a position, there’s no sense in selling just because things are overbought.  As an older trader once told me, “things can get overbought, then overboughter, then overboughtest, and then they can go up some more.”  He used to repeat this so people wouldn’t jump in short just because things had rallied a long way off the lows.

The miners also look very strong right now – at least on the daily chart anyway.  The XAU/gold ratio still shows the miners as “historically undervalued” – meaning they could run for quite a ways before they get back to something approaching fair value.  Whatever that is.  At some point there will be a correction, but not today.  There are too many traders afraid of missing out.  Gold = 1400 means those miners will make a lot more money.

Gold is just now getting everyone’s attention after spending 5 years in the wilderness.  The breakout above 1400 seems to be what did it.  How much farther can it rally?  Well, if regular people continue to feel as though they are missing out, it sure could keep moving higher.  The falling dollar helps too.

Silver on the other hand looks as though it is ready to correct.  It isn’t getting much help from copper, and that gold/silver ratio of 92 is just ridiculous.  At some point people will care, but right now they sure don’t.  Shorts are piling in once again.