The FOMC kept rates unchanged, although there was one Fed member (Bullard) who voted for a rate cut this time around. “Patient” was removed from the text – they are no longer going to be patient. The sense I had from the press conference is that Powell saw some recent, unpleasant data, but he wants to see more than one instance of said data before deciding to raise rates.  7 members are forecasting 2 rate cuts in 2019.

Gold’s move today was entirely about the Fed; it chopped sideways until the FOMC statement at 2 pm, then spiked higher, up perhaps $9. Gold didn’t move too much during the press conference. Then as the market was about to close at 3:55 pm, gold popped once more, about $10, closing at the highs. The long white candle was a bullish continuation, and forecaster jumped higher and is now in a very strong uptrend. This was a new closing high for gold. Gold is in an uptrend in all 3 timeframes.

But gold wasn’t finished. In early trading in Asia, gold has since jumped further, spiking about $37 higher to a new high of 1397.70 before moving back down again. Gold needs a close above 1382 in order to break above its 5-year trading range dating back to the gold smash of 2013.

Chart today is a monthly chart.  I’ve included the previous high at 1382.  Uptrend is quite strong.  Monthly candle pattern is also quite bullish.  A close above 1382 would be very bullish. 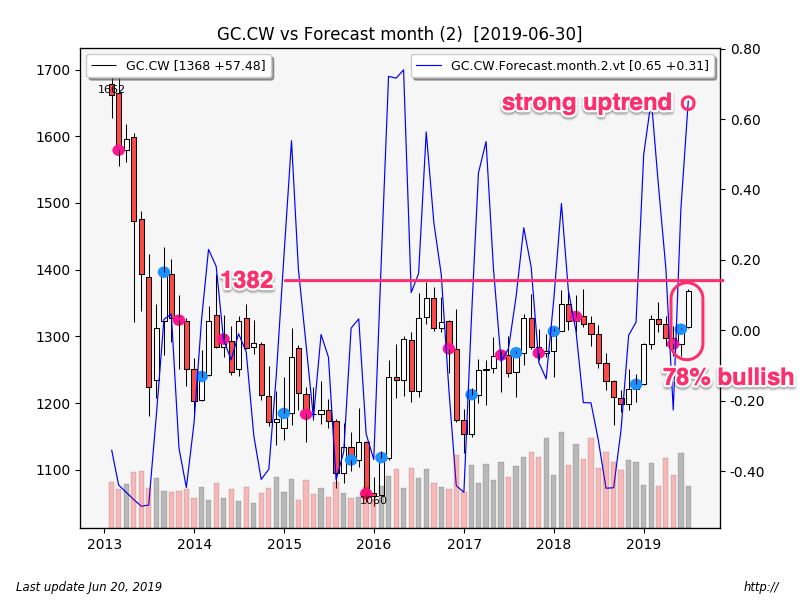 Silver looked a lot like gold, spiking higher at 2 pm, then once more at 3:55 pm. Silver’s long white candle was mildly bearish (34%), but forecaster shot higher, and is now in a strong uptrend. Silver remains in an uptrend in all 3 timeframes. The close above round number 15 is a reasonably big deal. (Silver also made a new multi-month closing high as well). While silver is still not racing higher faster than gold – this tells us that silver remains a bit sick – neither is it lagging. If the PM rally continues, managed money shorts will start bailing out much more enthusiastically, and then we should see some fireworks. I can’t tell you when that will be. Even so, there are signs that sentiment is improving. There were 3 “big rally” days in the past few weeks that ended up being mostly failed rallies, several of them probably stuffed by the shorts. That didn’t happen today.  Traders in Asia have noticed this, and appear to be jumping in.  Silver is trading at 15.30 in Asia at this moment.

COMEX SI open interest rose +457 contracts. Nobody went short today in silver – but there was no short-covering either.  Silver may be at an inflection point.

The gold/silver ratio fell -0.01 to 89.96. That’s neutral. Even so – the gold/silver ratio is at 27-year highs. Once silver does decide to start moving, it tends to move very, very quickly. I have seen 50-cent rally days. This may be coming soon. That’s why I’ve been long silver – for a while now. This has not been a fun trade – I got in a teensy bit too early – until just today. 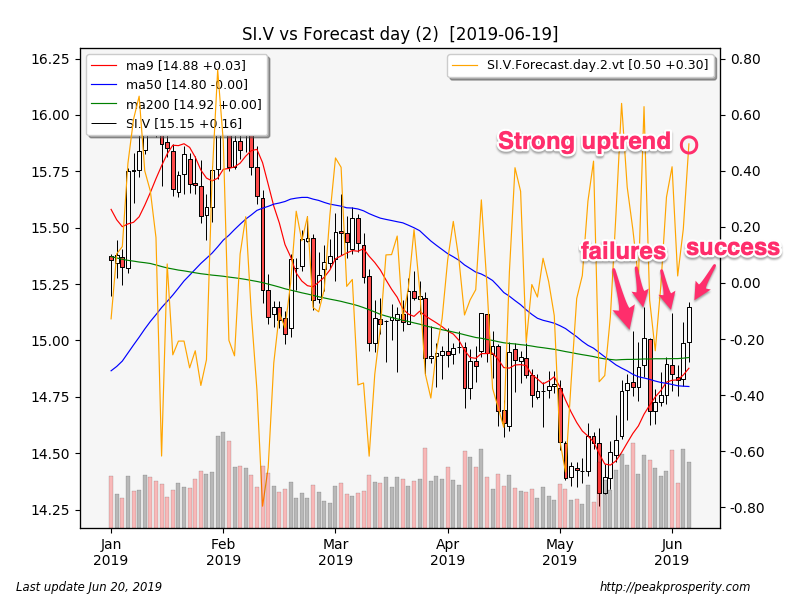 The miners followed gold’s track, rallying at 2 pm, but they did not manage to follow gold higher during the 3:55 pm move higher. GDX climbed +1.39% on heavy volume, while GDXJ climbed +1.13% on heavy volume also. XAU rose +1.18% (a new closing high), the long white candle was a bullish continuation, and forecaster moved higher into what is now a strong uptrend. XAU remains in an uptrend in all 3 timeframes. The new high is a break above the previous high set back in late March. 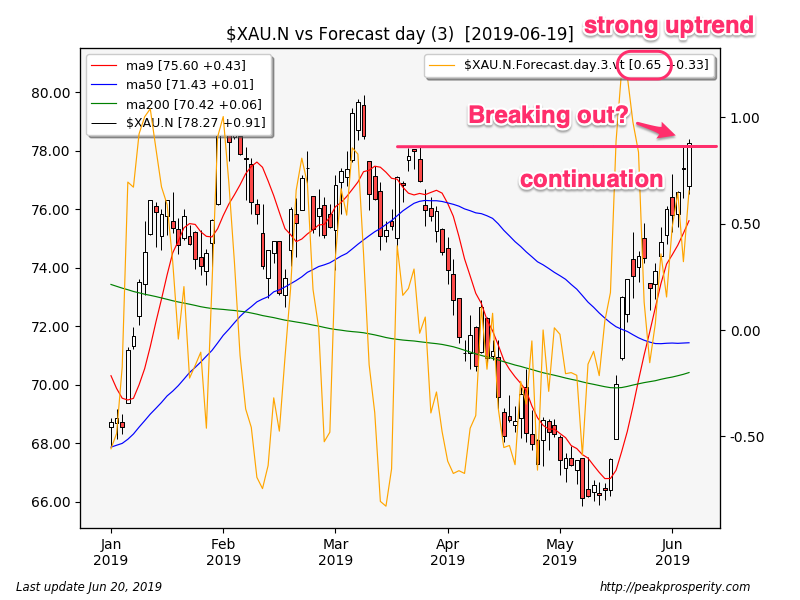 Platinum rose +0.98%, palladium climbed +1.44%, while copper fell -0.33%. Palladium continues to move towards its previous high set back in March; it is up perhaps $150 in the past 3 weeks. Platinum is still trying to put in a low, while copper just took a rest after yesterday’s big breakout.  Platinum remains very cheap – trading at $811, the platinum/gold ratio is at 1.68; the all time high for the ratio was set way back…two days ago at 1.69.  Did I mention that platinum was cheap?  That said – it is an industrial metal used in catalytic converters, so it tends to act more like copper these days.  If people decide platinum is a gold-like safe haven precious metal, platinum could easily outperform gold.  Will they?  There is no sign of that at this moment.

The buck fell -0.57 [-0.59%] to 96.55. Unlike gold, the buck fell for most of the day; the spike lower at 2pm was just the cherry on the top of a bearish day for the buck. The swing high/bearish engulfing pattern was bearish (57%), and forecaster dropped hard, moving the buck back into a downtrend. Today’s move took the buck below both the 9 and 50 MA lines. The buck is back in a downtrend in all 3 timeframes. The long term forecaster has been predicting this outcome all along – I’m not quite sure how. 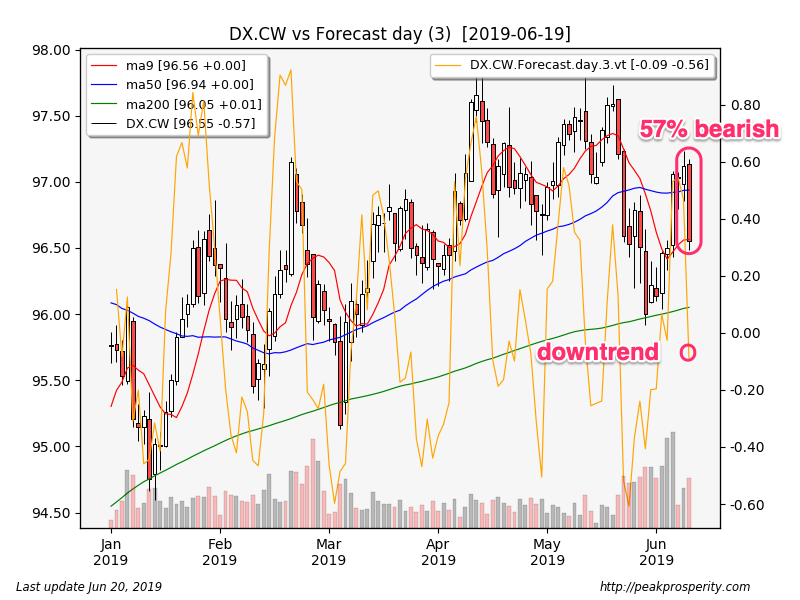 Crude rose +0.08 [+0.15%] to 54.41. Crude fell leading up to the EIA report, but the report was bullish (crude: -3.1m, gasoline: -1.7m, distillates: -0.6m) and that seemed to help crude to recover, at last for a time. The doji candle was mildly bearish (29%), and forecaster inched lower but remains in an uptrend. Longer term, crude remains in a downtrend in the weekly and monthly timeframes – although the monthly harami candle pattern is fairly bullish (50%).

SPX moved up +8.71 [+0.30%] to 2926.46. All of the move came following the FOMC announcement at 2 pm. The spinning top candle was a bullish continuation, and forecaster inched higher, remaining in a mild uptrend. SPX remains in an uptrend in all 3 timeframes.

TLT rose +0.14%, with the long white candle a bullish continuation, but forecaster fell sharply, leaving TLT just barely in an uptrend. TY did better, up +0.24%, the spinning top candle was a bullish continuation, and forecaster was largely unchanged, and remains just barely in an uptrend. Today was another new closing high for TY. TY remains in an uptrend in all 3 timeframes. The 10-year yield fell -3.1 bp to 2.03%. This represents a multi-year breakdown in the 10-year yield; it is now below the mid-2017 low. Last time we saw 10-year rates this low was late 2016. 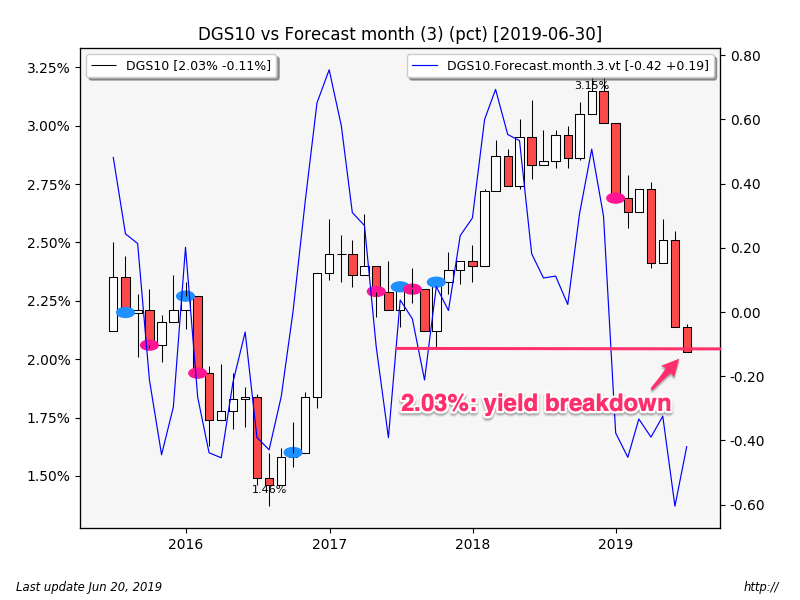 JNK rose +0.51%, which is another new high for JNK. JNK remains in an uptrend. The BAA.AAA differential rose +1 bp to 1.06 yesterday – it continues to climb. We have to wait until tomorrow to see how it did today, but judging from the strong JNK rally, the differential probably moved lower.

CRB fell -0.38%, with all 5 sectors dropping, led by agriculture (-1.31%). Normally the PM group should have shown a rally, but the commodity sectors must have “closed” for the day prior to the big PM rally.

While the move in PM after FOMC was reasonably nice, the move in early Asia trading says that gold is starting to get out of control. Even as I write this, silver is trading at 15.34, gold is at 1385, and who knows where the mining shares are because the index I track is closed for the evening.

Will this last until the close tomorrow? Who knows. Right now it appears that traders in Asia are concerned they will not be able to get onto the “silver train” – dip buying is at ever-higher levels. This isn’t short-covering, this is traders going long. Gold is mostly tracking sideways after the big pop to 1397.

The rain of new paper GC contracts today was significant but not outlandish, and I’m guessing it was dropped immediately after FOMC, and it seemed to stop the immediate rally – right up until the market was about to close, and then things got a little bit out of control. But then the traders left, and Asia opened, and then things really got out of control. Perhaps nobody was on duty with the authority to dump a BRExit-quantity of GC contracts during the Asia session.  What will “they” do when traders wake up in London? And then New York?

Tomorrow will be an interesting day.

If you are looking for me to tell you where things will go tomorrow – well, I have no idea. But today’s spike higher in Asia is a no-mistake danger sign. Rates are heading lower, and unless the other central banks decide to lower rates too, this will hurt the buck, and independently, it should also provide a tailwind for gold.  New paper will only stop this for so long.

And the surprise winner in this might well be silver. I mean, I’m long, so I’m hoping this will happen, and so take what I say with a grain of salt, but the early indications in Asia today suggest that sentiment may have changed. That’s what I’m seeing intraday anyway. And I’ll say it again, the near-historic expansion of the gold/silver ratio (89!) tells us that if silver does take off, the rallies as that ratio unwinds could be extremely strong.  Silver remains ridiculously cheap – then again, it has been cheap for quite some time now, so “cheap” doesn’t equate to a buy signal.

But perhaps this close above 15 does.

While Reuters is more tactful, reading between the lines you get the idea that Dragi substantially misrepresented the basic thrust of the most recent ECB meeting and policy discussion.  Dragi’s fabrications resulted in a plunge in the Euro, because the market assumed that Dragi spoke for the ECB as a whole.

Which, apparently, he did not.

Wolf Richter, who has some pithy commentary on this fabrication by Draghi, was not nearly as circumspect as Reuters:

What is hilarious is how Draghi was outed as a fabricator and schemer on the very same day he made his additional-stimulus-will-be-required speech, by people who were surprised by his speech, some of whom felt “powerless,” as Reuters put it, and knew he was trying to box them into a corner with his devious move. This has the smell of a palace revolt at the ECB against the head honcho and his last hurrah.

This may also partially account for the ongoing rally in the Euro both yesterday and today.  “No, the ECB isn’t dovish after all.”

Nothing like the Chairman being caught lying to smash confidence in the central bank.  Might this also have helped gold rally?  Who knows.

If true, I believe this is a very big deal.  A huuuuge deal.  Once Apple takes this action, China will understand that others will not be far behind.  There is a saying: “Follow the adult, and you won’t get bitten by the dog.”

To me, the odds of a US-China settlement have just increased substantially.

TAIPEI — Apple has asked its major suppliers to evaluate the cost implications of shifting 15% to 30% of their production capacity from China to Southeast Asia as it prepares for a fundamental restructuring of its supply chain, the Nikkei Asian Review has learned.

The California-based tech giant’s request was triggered by the protracted trade tensions between Washington and Beijing, but multiple sources say that even if the spat is resolved there will be no turning back. Apple has decided the risks of relying so heavily on manufacturing in China, as it has done for decades, are too great and even rising, several people told Nikkei.

As the old Chinese saying has it, “The dead pig isn’t afraid of boiling water.”