Gold rallied strongly through 8:30 am, making a new high to 1358.50. This lasted until Trump’s tweet hit at around 9:35 – where he said how he had a nice chat with President Xi, intimated that the trade talks were back on again. Gold plunged $10 in about 10 minutes. It did recover somewhat, but the tweet sure seemed to cap today’s rally. The spinning top candle was a bullish continuation, and forecaster rose slightly, with gold remaining in a reasonably strong uptrend. Gold remains above all 3 moving averages, and forecasters are in an uptrend in all 3 timeframes. 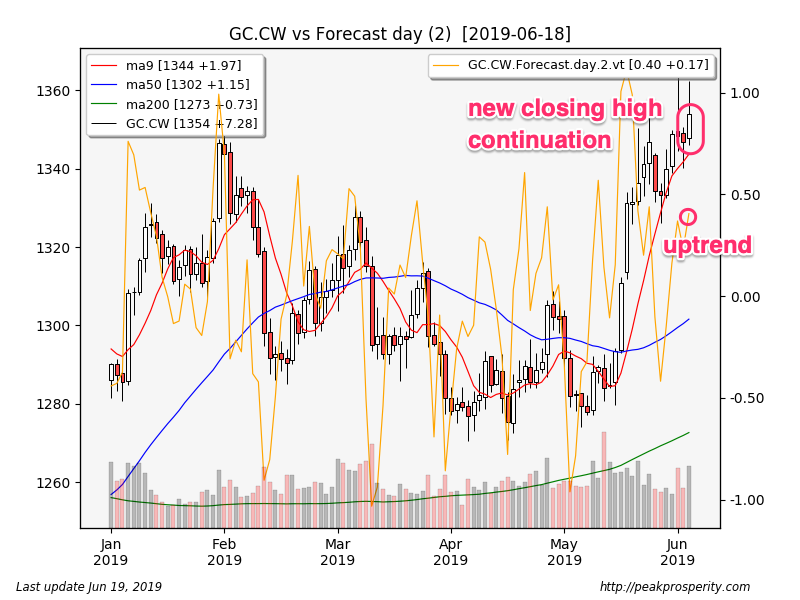 Silver rallied along with gold, moving somewhat lower following the tweet, but then silver pushed even higher, making the day high (15.08) at 11:20 am. It did retreat a bit into the close – but silver clearly outperformed gold today. It appeared as though the strong copper rally helped silver. Silver’s candle print was bullish, and forecaster moved higher into a stronger uptrend. Silver ended the day through its 200 MA. Silver remains in an uptrend in all 3 timeframes. To date, round number 15 has been strong resistance for silver. A close above 15 could lead to a fair amount of short-covering, especially if copper takes off as well.  We can also see a rough ascending triangle pattern.  If the uptrend remains intact, we could see a silver breakout in the next few days.  It probably depends on what happens at the FOMC meeting tomorrow.

COMEX SI open interest rose +6,828 contracts, or about 14 days of global production in new paper. The shorts piled in, which probably kept silver from closing above 15 – but the rally was reasonably strong even with all the new paper. Again, I credit copper’s strong move (along with all of the other metals) as an assist for silver. 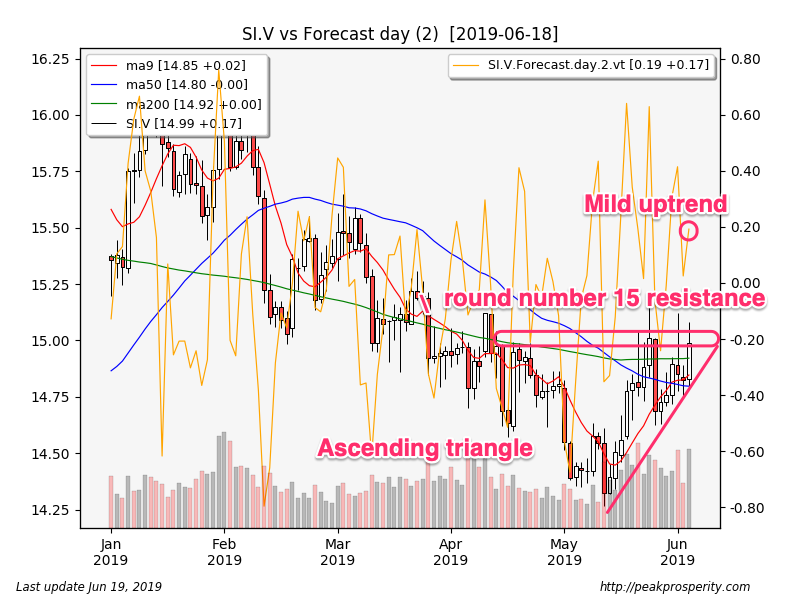 The miners gapped up strongly at the open, only to plunge following that tweet. They did manage to recover somewhat by end of day, with GDX up +0.90% on heavy volume, while GDXJ climbed +1.07% on heavy volume also. XAU rose +1.01%, the northern doji was a bullish continuation, and forecaster fell sharply, but remains in an uptrend. XAU remains in an uptrend in all 3 timeframes. 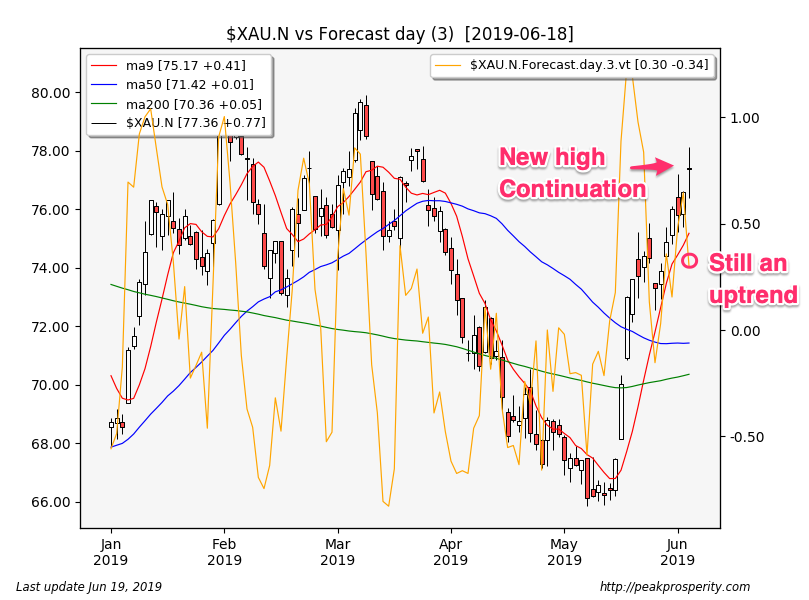 Platinum rose +1.16%, palladium climbed +1.73%, while copper moved up a strong +2.09%. Both palladium and platinum rallied in Asia, but the bulk of copper’s big move came after Trump’s “nice conversation” tweet; that is all about renewed hopes for a China trade deal.

The buck rose +0.09 [+0.09%] to 97.12. The spinning top candle was somewhat bearish (39%), and forecaster dipped lower, but remains in an uptrend. Longer term, the buck remains in a downtrend in the weekly and monthly timeframes, in spite of the strong move higher over the past two weeks.

Crude jumped up +2.10 [+4.02%] to 54.33. Much of that move seemed to be about the deployment of 1000 US troops to the Middle East, and the remainder came after Trump’s tweet at 9:35 am. At end of day, the API report was mildly bullish (crude: -0.8k, gasoline: +1.5m, distillates: -0.05m) – the report had no effect on price.  The bullish engulfing candle was bullish (43%), and forecaster jumped higher, and is now in an uptrend. Crude looks as though it is about to break above its recent trading range.  Both weekly and monthly forecasters are right on the edge of reversals. Crude is now back above the 9 MA, for the first time in 6 weeks. 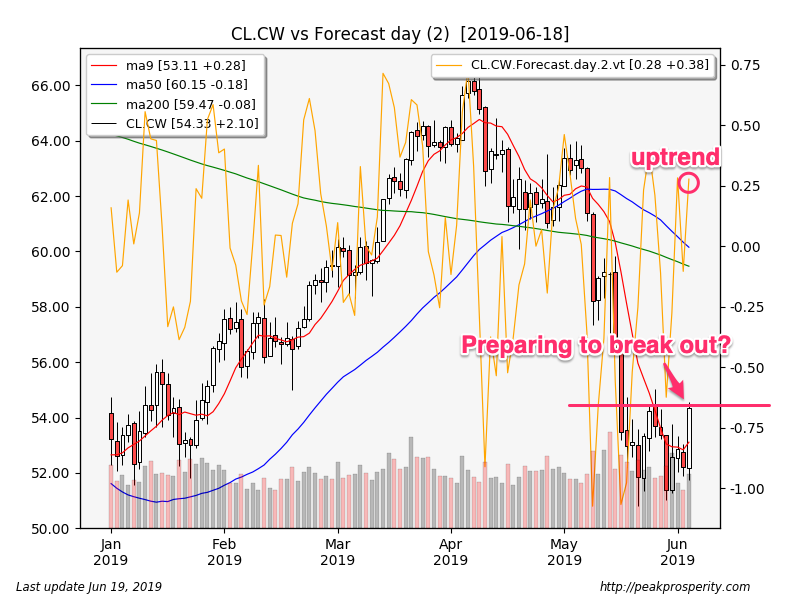 SPX rallied +28.08 [+0.97%] to 2917.75. A bit more than half of the move came in the futures markets overnight, and the remainder of the rally came following Trump’s 9:35 am tweet. The opening white marubozu was a bullish continuation, and forecaster moved higher, tipping SPX back into an uptrend. Today was a new high for this cycle. SPX is now in an uptrend in all 3 timeframes.

TLT jumped up +0.50%; TLT had gapped up at the open, but then fell after the Trump tweet. The long black candle was a bullish continuation, and forecaster jumped higher into a very strong uptrend. TY also did well, up +0.20%, with the spinning top candle a bullish continuation, forecaster moving slightly higher into an uptrend. This was a new closing high for TY. TY remains in an uptrend in all 3 timeframes. The 10-year yield fell -0.7 bp to 2.06%. It is right on the edge of a breakout – or a breakdown, if you look at yield.

JNK rose +0.50%, jumping to a new high. The spinning top candle was a bullish continuation, and forecaster jumped up into an uptrend. The BAA.AAA differential jumped +3 bp to 1.05%, but we have to remember this series is one day delayed; we have to wait until tomorrow to see what happened today.

Trump appears to be trying to set the stage for his re-election.  He wants a rate cut, a trade agreement with China, and a strong equity market performance.  More infrastructure spending (using borrowed money, of course) would be nice too.  This desire is showing up in market performance, especially in copper and equities.  Any action he takes now will take 9-12 months to hit actual economic performance.

He really wants a rate cut.  Obama only had to deal with 1 rate increase during his entire 8 years in office.  Trump has seen 8.  Perhaps he can be forgiven for being irritated at the Fed, which as we know, is an entirely political organization.  Nothing ensures electoral defeat like a crumbling economy. 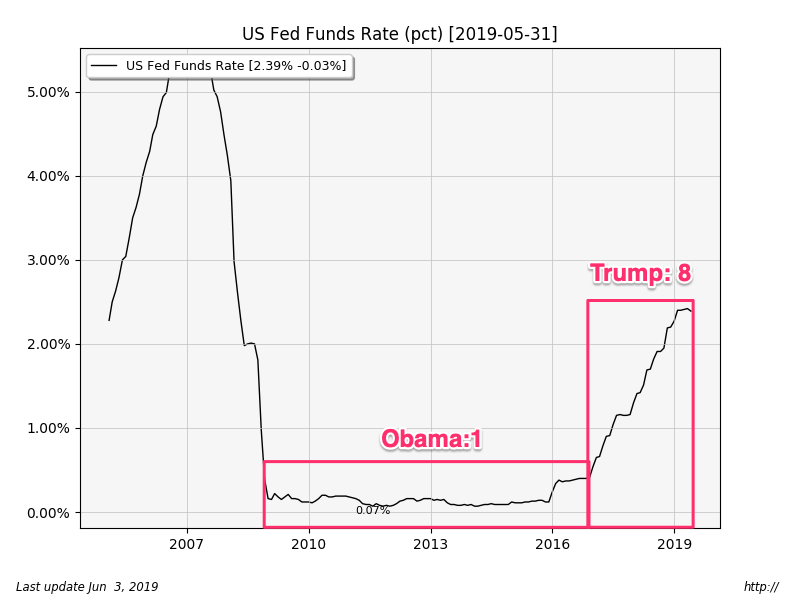 Copper rallied strongly following Trump’s tweet today.  I believe (from looking at intraday performance) that copper helped silver – they both topped out at the same time.  This suggests that progress towards a trade agreement (I know, we’ve been down this road before) will probably help silver more than gold.

Miners made new highs, but they are in overbought territory – RSI7 is 85.  They continue to outperform gold, which is a bullish sign.

FOMC announcement is tomorrow at 2pm, with a press conference at 2:30 pm.  I can’t even begin to guess what they will say, or how prices will react.  The cynic in me expects gold to sell off regardless – but maybe events will surprise me.  The bid underneath gold right now seems to be fairly strong, and momentum is pointing higher.  Is it time for a break above 1350?

Gold is not too extended right now – RSI around 70.  There is room for a breakout here.  I suspect it depends on how dovish the Fed is, and just how many new GC contracts get dropped onto the market.

Ultimately, I don’t think they want the headline, “Dovish Fed causes gold to close at a 5-year high.”

Hard to know exactly what the Fed is going to say, but the sentiment will be to articulate a future rate cut.  I highly doubt they cut today.  Trump will continue to cast about in frustration, and eventually he will get his way.  But it doesn’t matter for gold.  It wouldn’t surprise me to see another spike above $1350, but it will get sold back down in a day or two (if it even lasts that long).

ZH reports this morning that the Chinese interbank market is freezing, similar to the “Lehman moment” in the US.

If any of you financial guys can explain in simple terms what is happening here, I would love to hear it.

Did not see this story.  Interesting.

Here is my understanding.

First of all, banks are legally required to have a certain amount of cash on hand to meet depositor withdrawals “just in case” people come to the bank and want their money back.

Naturally, banks want to minimize this money on hand because it isn’t earning them any interest.  But sometimes one bank has a bunch of withdrawals, and they need to go and borrow some funds from a bank which has too much money lying around so they can meet their legal requirements.  That’s interbank lending.  Typically it is relatively short term.

“I have too many dollars lying around.  You don’t have enough.  I’ll lend you some of mine for a few weeks for 3% annualized”, or some such.  That rate is the “interbank lending rate.”

Well, when things get bad – let’s say Lehman comes to you on Friday in the fall of 2008 and says, “hey do you have a billion dollars you can lend us over the weekend?”  You have to assess the prospect they’ll go under.  If you think the prospect is high, you’re going to charge them a very high rate.  Or you may just say no.

So the interbank lending rate is really an instantaneous “counterparty bankruptcy risk assessment” by the other banks in the marketplace.

If the PBOC “adds liquidity” what they are doing is buying assets (say, bonds) from the banks, giving them newly-printed cash in exchange, and thus hoping the “banks with a bunch of new cash” will lend it to the banks who don’t have enough cash.  Presumably this should lower the interbank lending rate too – more extra cash lying around should drive down interbank lending rates.

But if “more cash lying around” (due to “liquidity injections” by PBOC) doesn’t drive down interbank lending rates – well now.  That’s a bad sign.  Banks with extra cash don’t want to lend to their friends because they are concerned they might just not get it back.

That’s how I understand it anyway.

They have already raised rates 8 times during his term.  Only 1 time for Obama, and 8 times for him.  I mean, he’s definitely a difficult character.  But, we know that the FBI had an “insurance policy” – maybe the Fed has one too.  Raise rates high enough, you choke the economy, cause a recession, and even Joe Biden will beat him in 2020.

I don’t know what will happen.  The Fed should have raised rates long ago.  But – I’m just suspicious, that’s all.

If the Fed does get all dovey and lowers rates, then I’m wrong.  That’s certainly the popular view of what will happen.  But I just don’t know.  Maybe there is more going on here than we know.

At some point, the bid under gold will swamp the rain of paper.  Are we there yet?  I don’t think so.  All my charts point higher, but if they drop enough paper on the market, the price will drop, because confidence in government remains intact.

Looks like there are a bunch of Fed officials who see 1-2 rate cuts “this year”.

Bullard actually voted for a rate cut today, the only dissenting vote, with the other 9 voting to keep rates even.

The word “patient” is gone.

Now we await the press conference.

Good post, Dave.  I agree with everything you said.  And here goes gold turning down right on queue now.