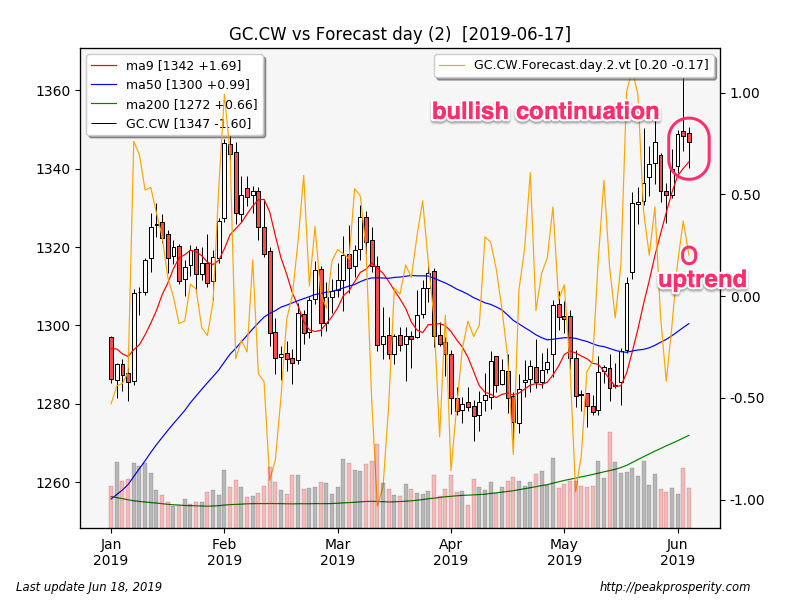 Silver basically followed gold’s track today, underperforming gold by a small amount. The doji candle was a bullish continuation, but forecaster dropped hard, ending the day just barely in an uptrend. Silver also avoided a swing high but forecaster doesn’t look so happy. Silver remains in an uptrend in all 3 timeframes, but the daily is now looking pretty iffy. 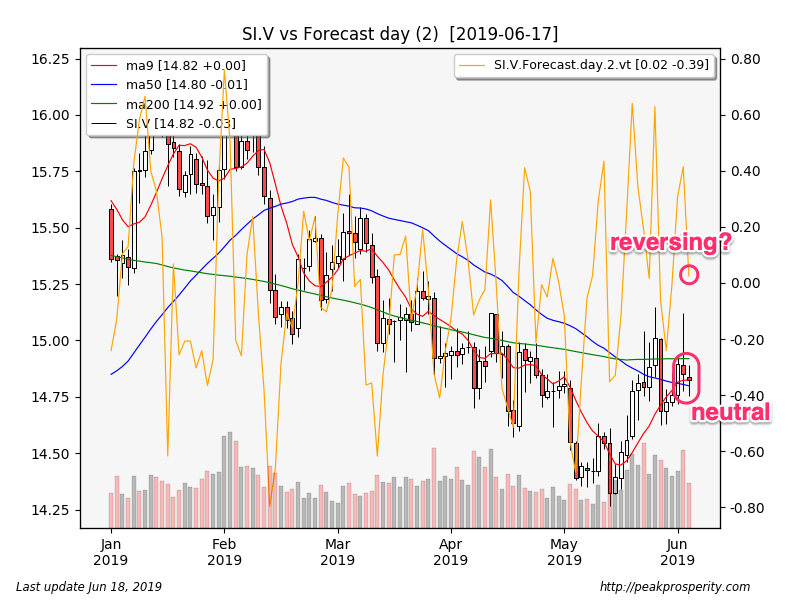 The miners moved higher after a morning dip, closing at the high. GDX rose +0.56% on very heavy volume, and GDXJ climbed +0.38% on light volume. XAU rose +1.03% to a new closing high, the closing white marubozu was unrated, and forecaster moved higher, into a reasonably strong uptrend. XAU is in an uptrend in all 3 timeframes. 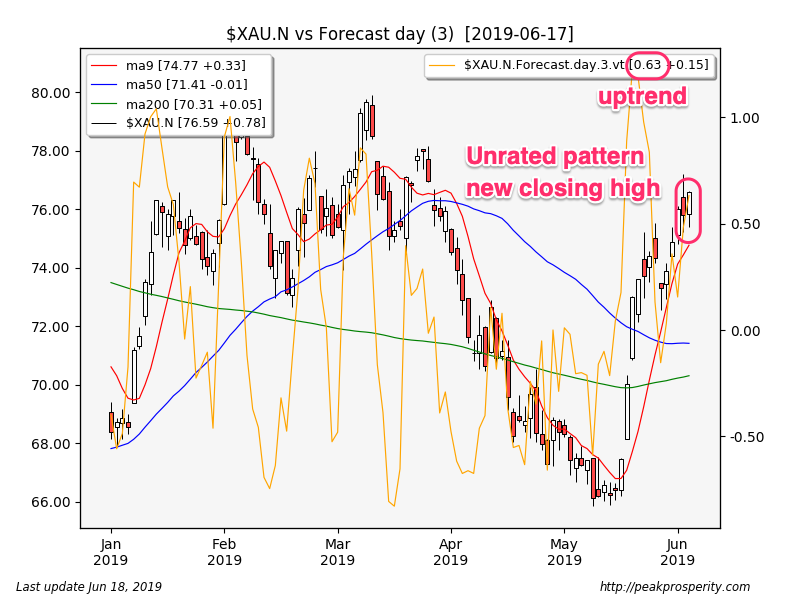 Platinum fell -1.11%, palladium fell -0.90%, while copper rose +0.82%. Platinum appears as though it is preparing to break down to new lows (downtrend in all 3 timeframes, current price: $794), copper is struggling to reverse higher, while palladium is just taking a rest after a strong move higher.

The buck fell -0.03 [-0.03%] to 97.03. The doji candle was unrated, and the forecaster edged slightly lower but remains in a strong uptrend. Longer term, the buck remains in a downtrend in the weekly and monthly timeframes.

Crude fell -0.65 [-1.23%] to 52.23. The short black candle was a bearish continuation, and forecaster dropped hard, moving crude into a downtrend. Crude is back in a downtrend in all 3 timeframes. Both weekly and monthly forecasters are hinting that a low might be near – but as of yet it has not materialized. API report is out tomorrow at 4:30 pm. 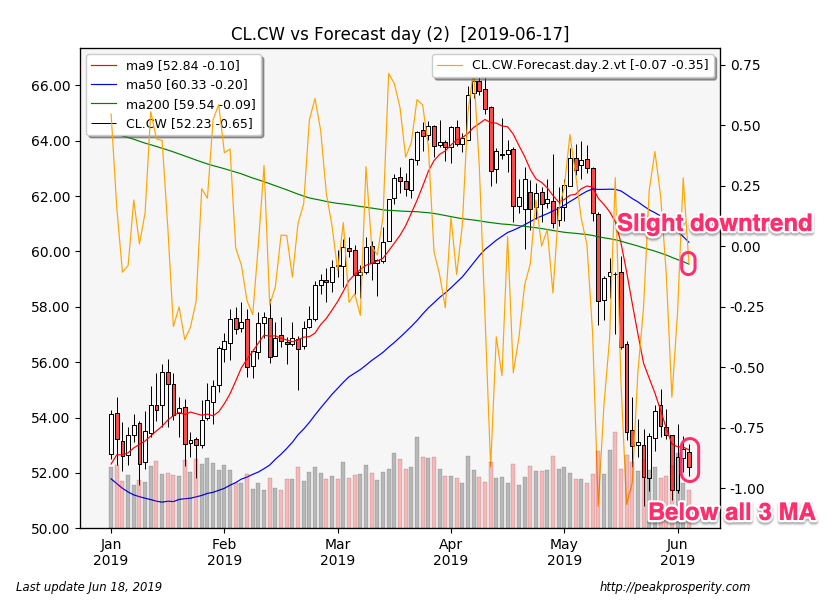 SPX rose +2.69 [+0.09%] to 2889.67. The northern doji was neutral, but forecaster moved lower, tipping SPX into a downtrend. Longer term, SPX remains in an uptrend in the weekly and monthly timeframes.

TLT rose +0.17%, the long white candle was neutral, and forecaster moved sharply higher, putting TLT in an uptrend. TY actually fell, losing -0.11%, but forecaster inched higher, remaining in a modest uptrend. TY remains in an uptrend in all 3 timeframes. The 10-year yield fell -0.7 bp to 2.09%.

JNK fell -0.14%, the short black candle was a bearish continuation, and forecaster moved lower, pulling JNK into a stronger downtrend. , moving into a downtrend. +0.20%, with the spinning top candle neutral, an forecaster inched higher and remains in an uptrend. h (44%), and forecaster dropped hard, but remains in a modest uptrend. BAA.AAA differential fell -2 bp to 1.02%. The credit differential is showing only mild concern about credit risk.

There was a curious report that came out today – the Empire State Mfg Survey (conducted by the New York Fed of 200 manufacturers in New York State) looked terrible, dropping deep into negative territory. This is recessionary. The -8.6 reading is far below expectations (10.0) and way below last month’s reading (17.8). New orders were particularly bad (-12.0) as were unfilled orders (-17.9). Econoday thinks tariffs are the culprit for the plunge. Surveys aren’t hard data; we will have to wait another 4 weeks for INDPRO to appear, but this could be a warning sign. The markets didn’t noticeably react to this report.

“Had a very good telephone conversation with President Xi of China. We will be having an extended meeting next week at the G-20 in Japan. Our respective teams will begin talks prior to our meeting.”

Too much supply and so little demand for either.

This recent tweet by Trump contains a lot of levels of wrongness:

How is the DAX being up unfair to the US, especially since US equities are up strongly too?

Also, how is a stock market being up fair or unfair on any level at all to trading partners?

Finally, how can anybody feel good about (1) Trump day trading the US equity “”markets”” via tweets or (2) that his efforts succeed?  Both make me squirmy inside.

A while back Draghi was tut-tutting Trump for “manipulating the currency market” which is supposedly a big no-no.  But of course Draghi does exactly that all the time.  The most recent event was the recent ECB meeting where they weren’t dovish enough, and the Euro rallied.  Dragi didn’t like that, so he sent out some member to talk more dovishly, and of course the Euro responded by dropping.

So I do think Trump has a gripe re: currency markets and competitive devaluations.

I don’t know what his thing is about the DAX though.  Someone else is stealing his trophy?  Who knows.

I am very curious how the Chinese managed to keep the SSEC moving sideways after the failure of the trade talks – even though some individual Chinese issues that were registered here in the US were just crushed.

Which do I believe?