Gold moved slowly higher in Asia, then took off more rapidly after the US market opened, ending near the highs. The closing white marubozu was a bullish continuation, and forecaster moved into an uptrend. Gold made a new closing high today. Gold is now in an uptrend in all 3 timeframes, and it appears on the verge of a breakout above round number 1350 – which would be a significant milestone for the yellow metal.  The declining volume is a bit of a bearish sign – you normally want to see volume increasing as price rises – although the lowest volume is on the down-days, which is actually positive. 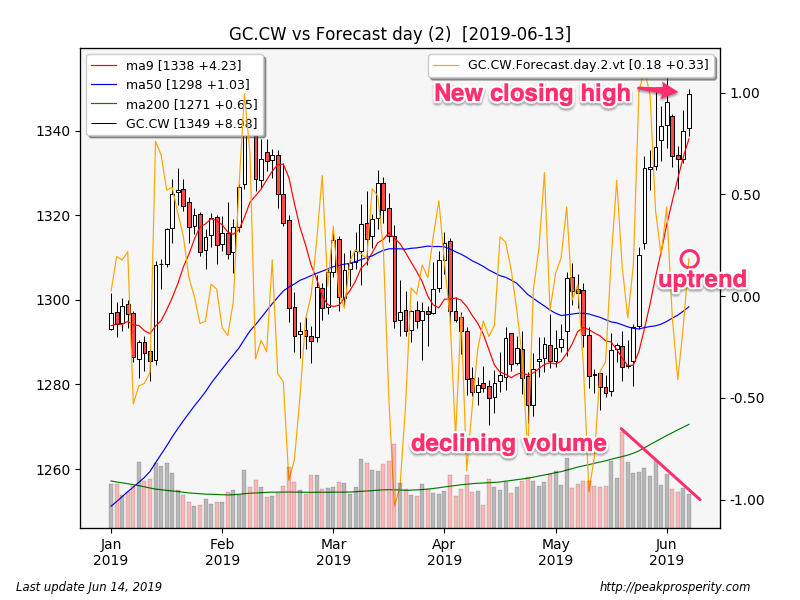 Silver mostly followed gold’s track higher today. The long white candle was a bullish continuation, and forecaster moved into an uptrend. Silver’s rally took it convincingly through both the 9 and the 50 MA lines, moving right up to the 200. Silver is now in an uptrend in all 3 timeframes.

COMEX SI open interest rose +3,211 contracts. That’s 7 days of global production in new paper.  The silver shorts have not given up. 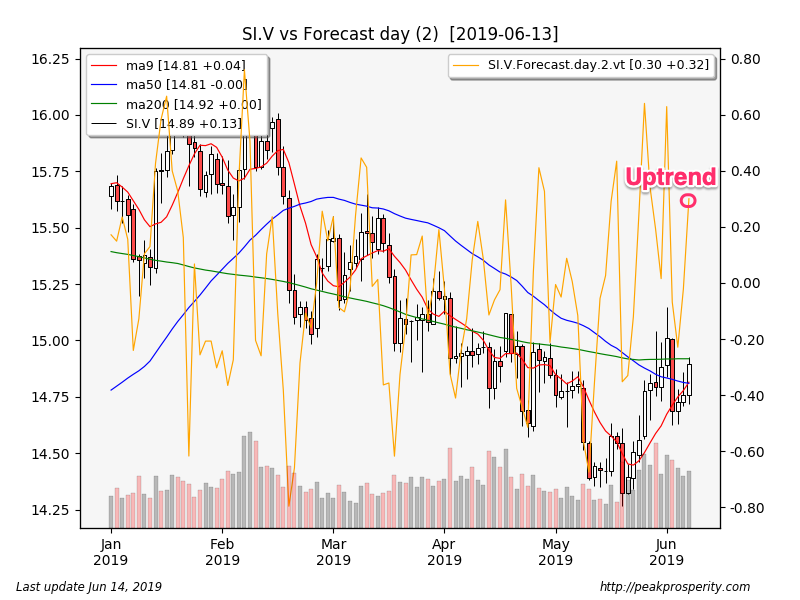 The miners gapped up at the open and then moved higher for most of the day, closing at the highs. GDX rose +1.22% on moderate volume, while GDXJ climbed +1.58% on moderate volume also. XAU moved up +1.51%, breaking out to a new high; the long white candle was a bullish continuation, and forecaster actually moved lower, but remains in an uptrend. The monthly confirmed bullish NR7 pattern is extremely bullish (82%). XAU is in an uptrend in all 3 timeframes. 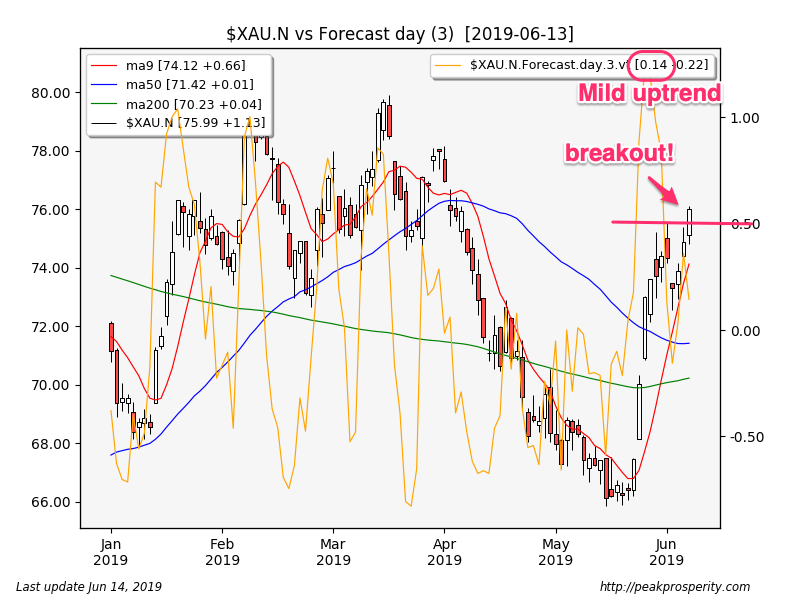 Platinum moved up +0.12%, palladium jumped +2.71%, and copper rallied +0.30%. Both copper and platinum are mostly just moving sideways, while palladium is once again moving strongly higher.

Crude rallied +1.17 [+2.28%] to 52.56. The move occurred as a result of an attack on two tankers in the Gulf of Oman – one from Taiwan, and another from Japan. Iran has denied involvement in the attack. The rally was a relatively modest move given the potential for escalation, if Iran really was the culprit. The bullish harami pattern was bullish (39%), and forecaster moved higher, but remains in a downtrend. Crude remains in a downtrend in all 3 timeframes, and below all 3 moving averages.

TLT climbed +0.34%, the swing low pattern was quite bullish (62%), and forecaster moved into an uptrend. TY also did well, rising +0.22%, the long white candle was a bullish continuation, and forecaster inched lower but remains (barely) in an uptrend. TY remains in an uptrend in all 3 timeframes. The 10-year yield fell -3.6 bp to 2.09%. Bonds appear to be – possibly – heading for a breakout.

JNK rose +0.20%, with the spinning top candle neutral, and forecaster inched higher and remains in an uptrend.  BAA.AAA differential fell 1 bp yesterday to 1.03%. In spite of an almost-certain 3 rate cut prediction by the futures markets, the credit differential remains only mildly concerned about credit risk.

US Import/Export prices report today showed that headline prices fell -0.3% m/m, and non-petroleum import prices also fell -0.3% m/m. The US tariff regime does not seem to be having any impact on import prices overall, although this measurement occurred prior to the most recent tariff increase.

Gold’s rally today was a bit surprising, and reasonably strong given that there was nothing I saw that might have caused it to occur.  The miners breaking out to new highs was an even stronger bullish signal – miners tend to lead, and juniors did better than seniors, so that was quite bullish as well.

In early Asia trading, gold has broken out above 1350 – it is trading right now at 1359.  The high to beat is 1377, set back in July 2016.  Gold appears strongly attached to the rate-cut predictions, which are accelerating by the day as we approach the Fed meeting next week.

I’ve been struggling with the reasons why the market is projecting a large number of rate cuts, and yet the basic underlying economy remains at least moderately strong.  Last month, a Fed official floated a trial balloon about the concept of a “peg” – namely, the Fed being the Treasury Buyer of Last Resort – willing to buy any and all Treasury bonds at or below a “pegged” interest rate, using newly-printed dollars.  Theoretically, this will serve to keep government interest expense within bounds, and to keep medium and long rates at economy-stimulating levels.  Martin Armstrong:

This is a hybrid interest rate system that would eventually collapse as all pegs do. But it will allow, initially, for a bifurcation of rates.

This is feeding into what we see coming for the next wave. They realize QE has failed. They cannot allow rates to rise as it would blow out the budgets.

This is not a long-term solution. The interest rate peg collapsed in 1951 due to Korean War inflation.

So under the proposed “peg” system, short rates can vary, but long rates will be fixed.

Is gold sniffing out this potential policy change – which is effectively a return to QE?  If the market sees a “peg” not as a “temporary stimulus plan” but instead if it is viewed as a tacit admission that the US deficit can no longer be funded “at a reasonable price” by the marketplace – things could come unraveled in a hurry.

Another interview (posted by one of our members yesterday) suggested that the Fed Funds rate moving higher than IOER for the first time ever signaled problems in US treasury auctions and a difficulty in funding the US government deficits.  The Fed dropped IOER in order to pull the Fed Funds rate lower.  “Deficits are starting to matter”, was the summary. 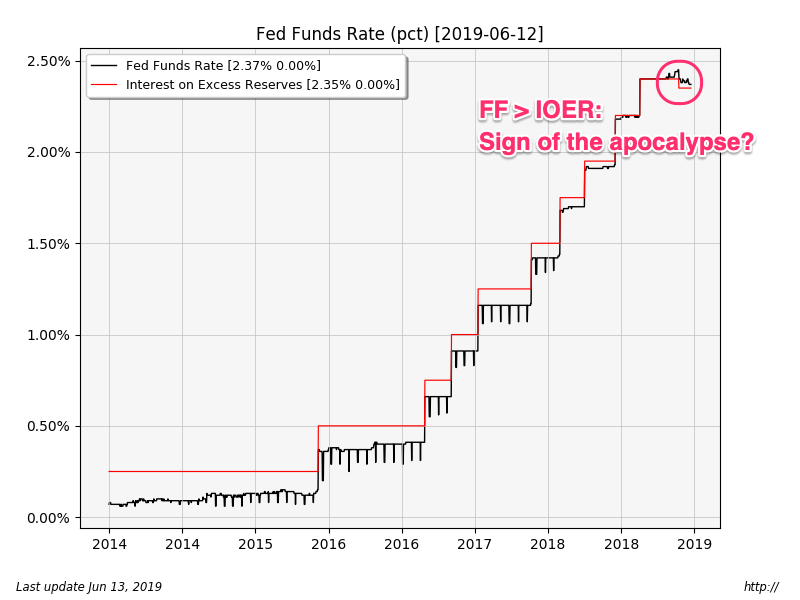 Things may be starting to get interesting.  At least for gold anyway.