The FOMC meeting was the news of the day; Powell had a lot to say, and unpacking it all would take more time than I have. Bottom line: 4 more rate cuts until “neutral”, and there will now be a press conference after every meeting. This is not to suggest there will be a rate hike every meeting, mind you, its just a new thing – more transparency at the Fed. And of course this opens the door to a possible rate hike every meeting, if need be. Which is quite unlikely. But you never know.

Gold spiked down at 4:20 am in one of those high-volume spike events (4300 contracts traded in 1 minute), but the drop was rapidly bought. There was another move lower at 2pm on the FOMC announcement, but that was wiped out by Powell’s press conference. I’m not sure what Powell said to cause the rally, but gold started moving higher shortly after he started talking. Forecaster rose +0.15 to -0.11; that’s not quite enough for a buy signal just yet. Gold right now is just trading in a range. 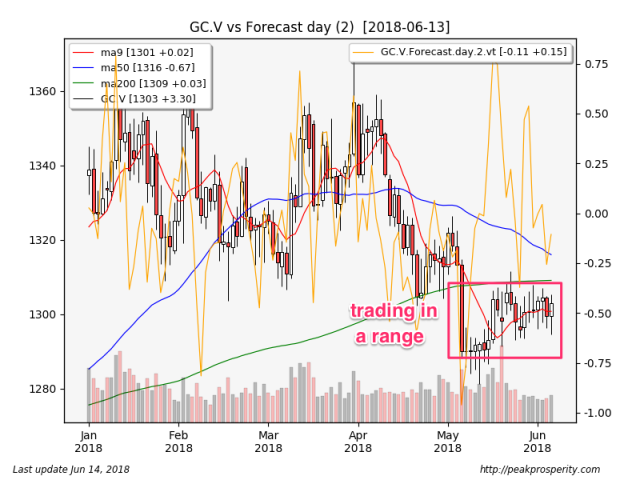 Silver rallied into the FOMC, sold off at 2 pm on the announcement, and then rallied strongly during the press conference, retaining most of its gains into the close. Silver made a new high today to 17.14. Forecaster moved up +0.12 to +0.58, which is a strengthening uptrend for silver.  Silver is looking much, much stronger than gold – it is well above all 3 moving averages. 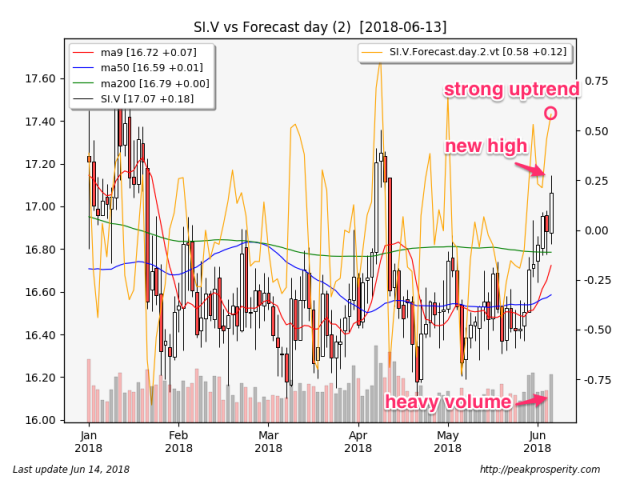 Miners were mixed today, with GDX down -0.04% on moderately light volume, while GDXJ rallied +0.46% on heavy volume. Miners actually sold off fairly hard at 2 pm, but the PM rally at 2:30 pulled the miners overall back to neutral. XAU forecaster fell -0.13 to +0.10. The miner uptrend continues to slow.

The GDXJ:GDX ratio moved up, but the GDX:$GOLD fell. That’s neutral. 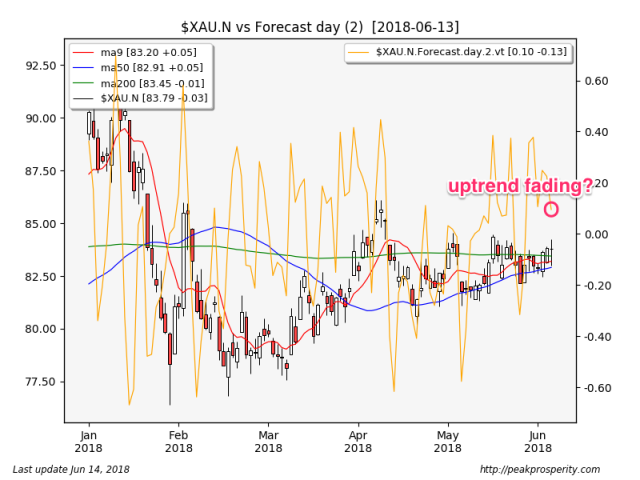 The dollar fell -0.05 [-0.05%] to 93.38 . As mentioned, this is only because the DX futures contract closed at 2:30 pm, and most of the excitement happened immediately afterwards, during Powell’s press conference. The moves after the close will be folded into tomorrow’s price move.

JNK was unchanged; it sold off at 2pm, and didn’t quite recover by the close. JNK remains in a strong uptrend – according to the forecaster. It doesn’t look all that exciting on the chart, though.

What conclusion to draw from the FOMC announcements today? We are expecting 4 more rate increases before “neutral” is reached. The balance sheet unwind continues uninterrupted. Powell thinks that Trump’s tax cuts will stimulate economic activity.  Silver liked all that, while gold liked it less, and the buck rallied also, at least to some degree anyway.

In Europe, the migrant situation is heating up.  Yesterday, French PM Macron accused the Italian government of “cynicism and irresponsibility” for refusing to let a ship packed with migrants (a.k.a. “migrant sea taxi”) dock in Italy.  Italy immediately fired back, accusing the French of being hypocritical.  Italy has a point; 500,000 migrants have landed in Italy by “migrant sea taxi”, because Italy is the closest destination.  France, not so much.

Di Maio shrugged off the French criticism. “I’m glad the French have discovered responsibility: if they want, we will help them,” he said. “Let them open their ports and we will transfer a few of the people to France.”

Something to consider: these migration issues are happening while the global economy is doing relatively well.  Just think what happens when the economy turns down.  Can the EU continue to retain its “everyone is welcome” refugee rules (a feel-good policy, for which Italy gets to bear the burden) during such a situation?

And if no changes are made – the EU will explode for sure.  Italy is demonstrating at this very moment that she will not put up with this situation any longer.