Gold made all of its gains during the Asia session, falling back a bit in London and New York. The swing low pattern was very bullish (67%), and forecaster moved higher but gold remains in a downtrend. Gold remains in an uptrend in the weekly and monthly timeframes, and above all 3 moving averages. 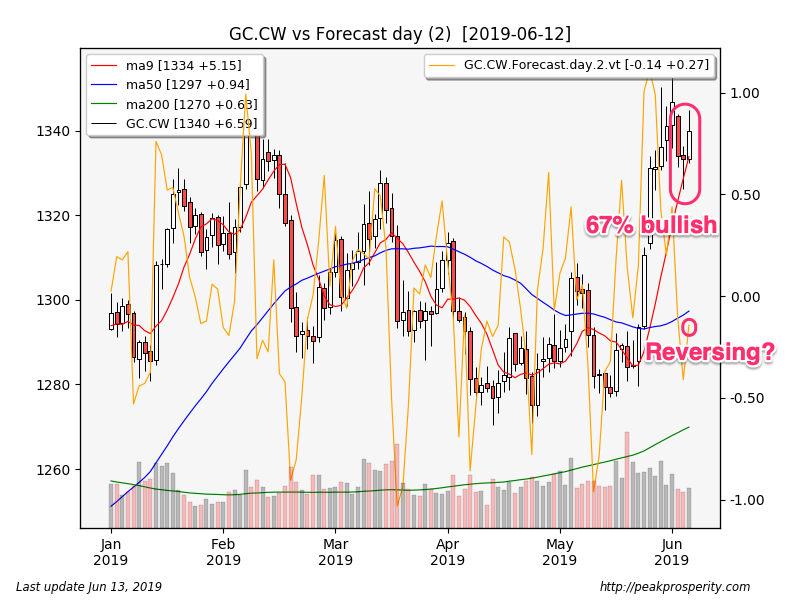 Silver moved higher along with gold in Asia, but then managed to lose most of its gains during the London session. The spinning top candle was a bit bearish (38%), and while forecaster did move higher, it was not enough to move silver into an uptrend. Silver remains in an uptrend in the weekly and monthly timeframes, and below all 3 moving averages.  Silver is having trouble moving higher at this point.  That’s probably because of managed money piling in short.

COMEX SI open interest rose +4,410 contracts. That’s 9 days of global production in new paper – another big increase. Shorts are piling in as silver tries to move back above its 50 MA. 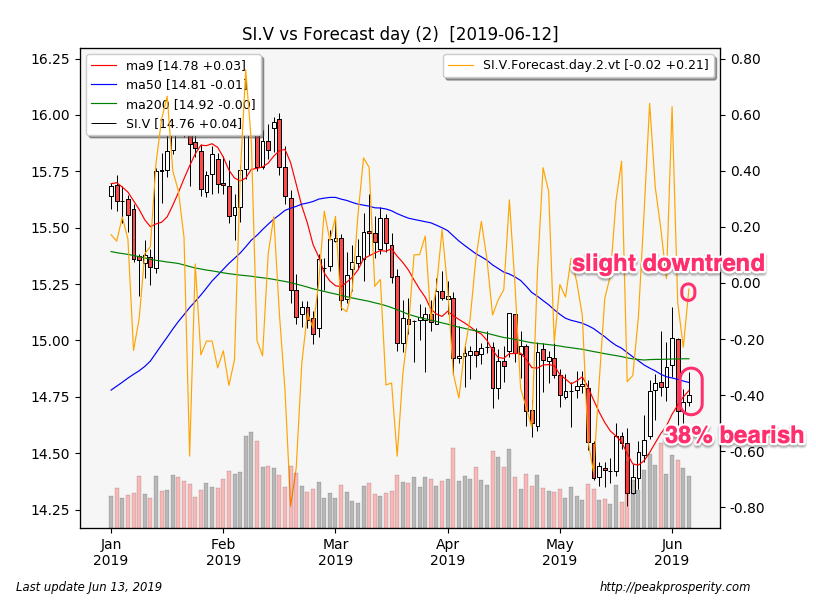 The miners gapped up strongly at the open and then continued moving higher during the first few hours, fading somewhat into the close, but still retaining most of the gains at end of day. GDX rose +1.64% on moderately heavy volume, while GDXJ climbed +1.87% on heavy volume. XAU rose +1.30%, the spinning top candle was a bullish continuation, and forecaster moved higher into an uptrend. Miners are moving towards a breakout to new highs. XAU is in an uptrend in all 3 timeframes.  In contrast to what is happening in silver, Monday’s dip in the miners is definitely being bought. 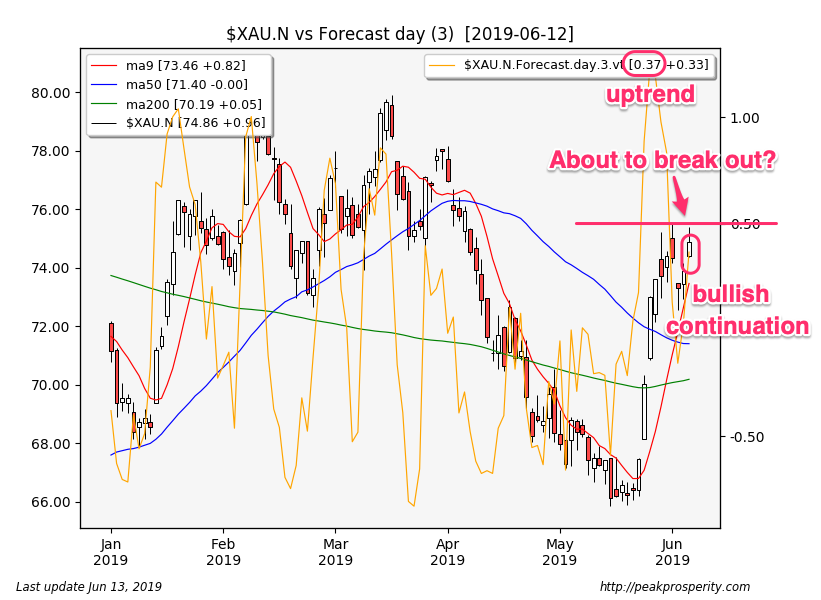 The buck jumped +0.32 [+0.33%] to 96.46. The confirmed bullish NR7 looked quite strong (48%), and forecaster jumped into an uptrend. It appears that the buck found support at the 200 MA. Even with today’s rally, the buck remains in a downtrend in the weekly and monthly timeframes.

Crude plunged -1.97 [-3.69%] to 51.39, making a new closing low for this cycle. The opening black marubozu was mildly bullish (31%), but forecaster plunged, dropping crude deeper into a downtrend. The plunge was enough to flip the monthly into a downtrend also – which puts crude in a downtrend in all 3 timeframes. Half of crude’s plunge took place during trading in Asia and London, while the remainder occurred following the mildly bearish EIA report (crude: +2.2m, gasoline: +0.8m, distillates: -1.0m) at 10:30 am. It seemed to me that crude just wanted to drop. Round number 50 is not far away, and given the way the market is beahving right now, I’m not sure that 50 holds for long. 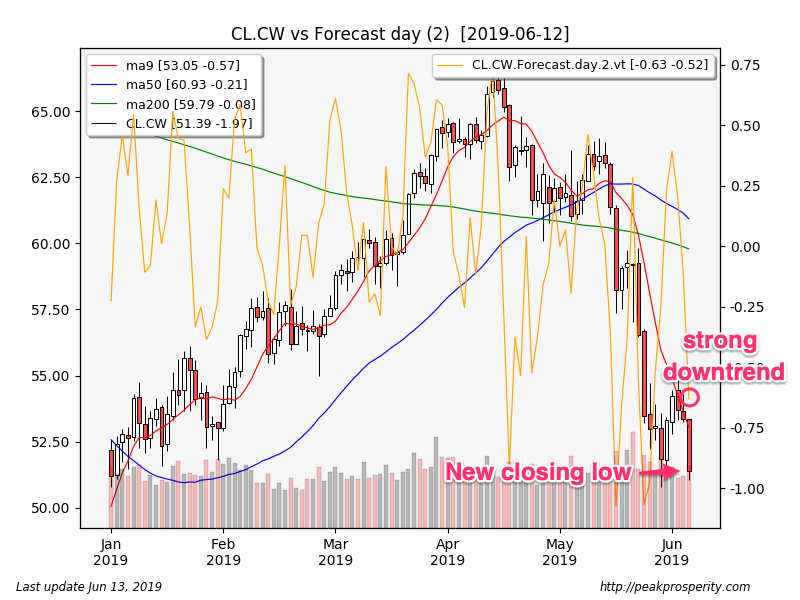 Nick Cunningham thinks its about weakening demand, driven by a deceleration in the global economy. https://oilprice.com/Energy/Crude-Oil/Oil-Plunges-On-Fears-Of-Weak-Demand.html

SPX mostly went nowhere today, falling -5.88 [-0.20%] to 2879.84. The short black/spinning top was neutral, and forecaster moved lower, but remains in an uptrend. SPX remains in an uptrend in all 3 timeframes, but it may be at a reversal point once more – both daily and weekly forecasters are looking pretty iffy right now.

TLT rose +0.08%, basically chopping sideways; the short white candle was neural, and forecaster inched higher but remains in a downtrend. TY looked substantially better, rising +0.21%, printing a swing low candle pattern which was extremely bullish (61%), and forecaster moved higher into a moderate uptrend. After a very short correction, bonds may have bottomed out. TY remains in an uptrend in all 3 timeframes. The 10-year yield fell -1.3 bp to 2.13%.

JNK plunged -0.24%, the swing high pattern was relatively bearish (44%), and forecaster dropped hard, but remains in a modest uptrend. BAA.AAA differential fell 1 bp yesterday to 1.04%. This is a bit of a lagging indicator since it updates with a 1 day delay.

The CPI report was out today; the headline number was +0.1% m/m (1.2% annualized), with CPI less food-and-energy also up +0.1% m/m. This relatively low government-inflation number is at the low end of expectations; Econoday thinks that this might be a focal point of the Fed’s comments next week.

Yesterday’s PPIACO print was also negative; I use the older series rather than the new PPI-FD, since PPIACO dates back to the early 1900s. Both CPI and PPIACO hint at falling input prices, which continue to support signs of a manufacturing recession. Falling crude prices underscores this too.

The bid under gold and the miners seems strong; silver, at least for now, continues to suffer from large, frequent increases in open interest – relatively frequent deluges of new paper silver created by managed money that force price lower.  The gold/silver ratio continues to climb.  At some point – as I have said many times before – the snap-back will be really impressive, but that day is not yet upon us.

Deficits are starting to matter, or at least they appear to be.

If the FED goes crazy financing the US dent issuance b/s Congress abdicates its duties, I would rather be in gold than the stock market since there is too much debt in the corp world already. Therefore, banking crisis too.   How does one predict the outcome of that other than gold would be a hedge for the madness?