FOMC started its meeting today, but it was overshadowed by the Trump-KJU summit in Singapore. From “little rocket man” to “the man loves his country” in 9 months.

Gold generally moved lower today, with a big spike down at 8:20 am that was eventually bought, but apart from that bounce, gold looked relatively weak. Candle print was a neutral-looking high wave, and gold forecaster plunged -0.27 to -0.22, which is a sell signal for gold. There has been a lot of chop in the last few weeks – forecaster hasn’t been too helpful since there really hasn’t been a trend. Still, gold is now in a downtrend in all 3 timeframes, and it is now below the 9 MA.

That said – it is my observation that gold tends to drop going into FOMC meetings.  We may be seeing that play out. 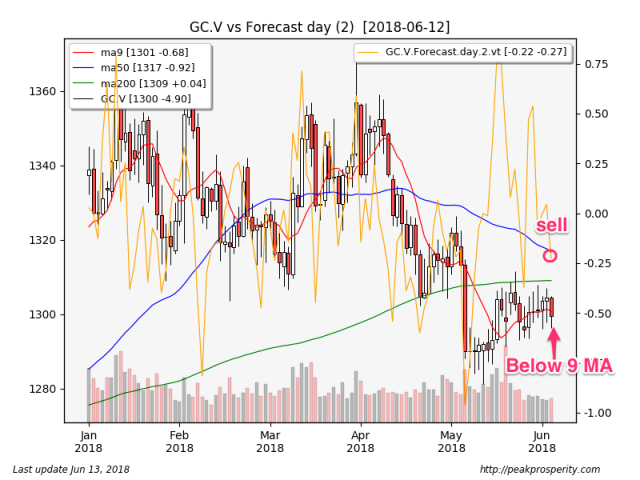 Silver more or less tracked gold, bottoming out around 8:20 am, bouncing back and recovering all of its losses, only to fade into the close. Print was a neutral spinning top, and forecaster jumped +0.23 to +0.44. For some reason, today’s dip was positive for the forecaster. 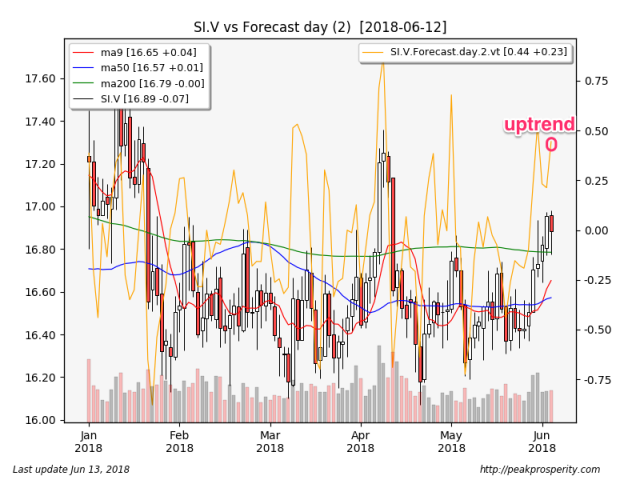 The GDXJ:GDX ratio moved up, and so did the GDX:$GOLD ratio. That’s bullish. 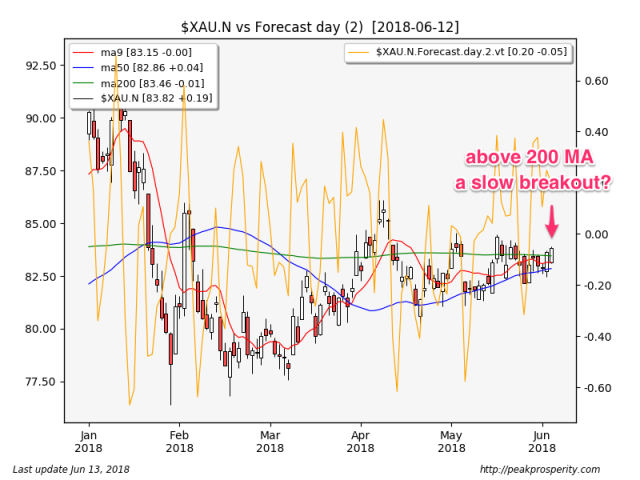 Platinum fell -0.52%, palladium dropped -0.04%, while copper moved down -0.18%. If platinum is any sort of tell for the rest of PM, it looks as though it may just tip over and re-test the 880 lows. Palladium and especially copper still look fairly strong.

Crude edged down -0.08 [-0.12%] to 65.95. Crude tried to rally today but failed, making a new high to 66.70 before losing all its gains and then some by end of day. While the doji candle looked neutral, the forecaster wasn’t happy, dropping -0.16 to -0.05, which is a sell signal for crude. The API report looked bearish (crude: -0.7m, gasoline: +2.3m, distillates: +2.1m), and that report took crude down about 25 cents when it came out at 4:30 pm. Other possibly-bearish influences were reports that Russia, Saudi Arabia,and the US all increased oil production.

TLT rose +0.03%, essentially going nowhere. TY actually fell, losing -0.06%. The 10-year yield was unchanged at 2.96%. TY remains in a downtrend in both daily and weekly timeframes, but the monthly is right on the edge – right at neutral.

Not much happened today – the markets were relatively quiet. Perhaps the most interesting market-moving news was the increase in crude production from Russia and Saudi Arabia.

As I mentioned, FOMC announcement is tomorrow at 2pm, with a press conference at 2:30. The Fed will almost certainly raise rates another 25 bp, but the focus will be on how many more increases we can expect going forward.