Gold dropped off a minor cliff at about 2:30 am, dropping steadily until it made the day low (to 1326.60) at around 8 am. Gold then bounced back, regaining most of those losses by the close. The high wave candle was mildly bullish (33%), but forecaster moved lower, dropping deeper into a downtrend. Gold remains in an uptrend in the weekly and monthly timeframes, and above all 3 moving averages.

COMEX GC open interest fell -1,225 contracts. That looks like a bit of short covering on the decline. 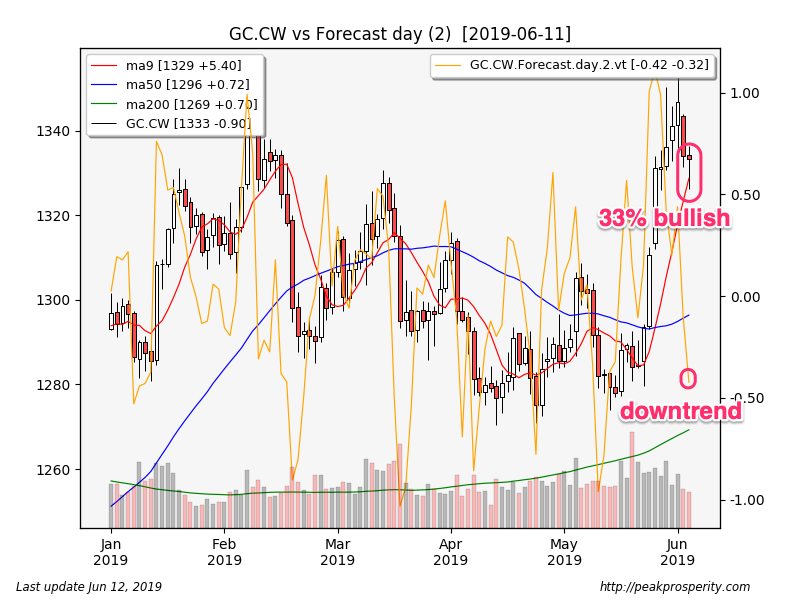 Silver inched lower in Asia, then took off along with gold around 8 am, ending the day in the green. The bullish harami candle was a bearish continuation, and forecaster moved lower into a downtrend. Silver remains in an uptrend in the weekly and monthly timeframes, but below all 3 moving averages. 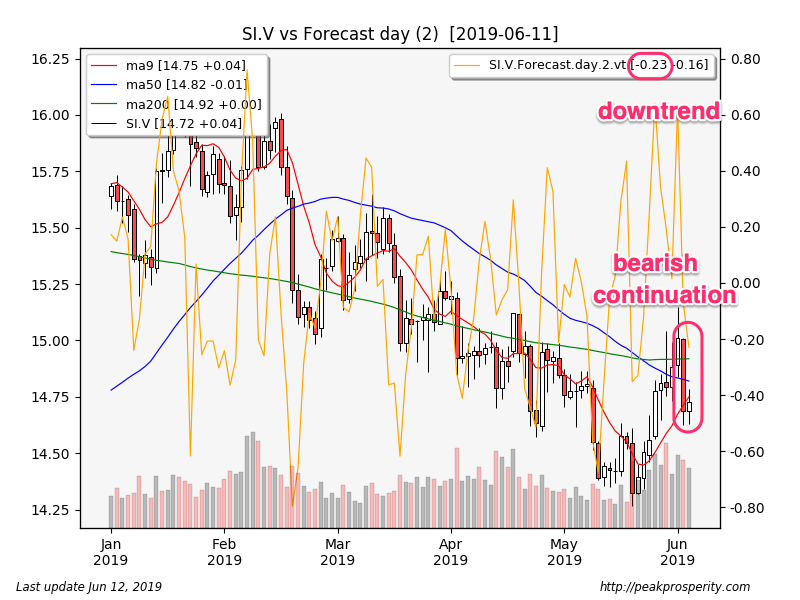 The miners gapped down at the open, but then rallied back into the green by end of day. GDX climbed +0.58% on moderately light volume, and GDXJ moved up +1.30% on heavy volume. XAU rose +0.79%, the confirmed bullish NR7 was bullish (44%) and forecaster inched back up into a slight uptrend. XAU is in an uptrend in all 3 timeframes. 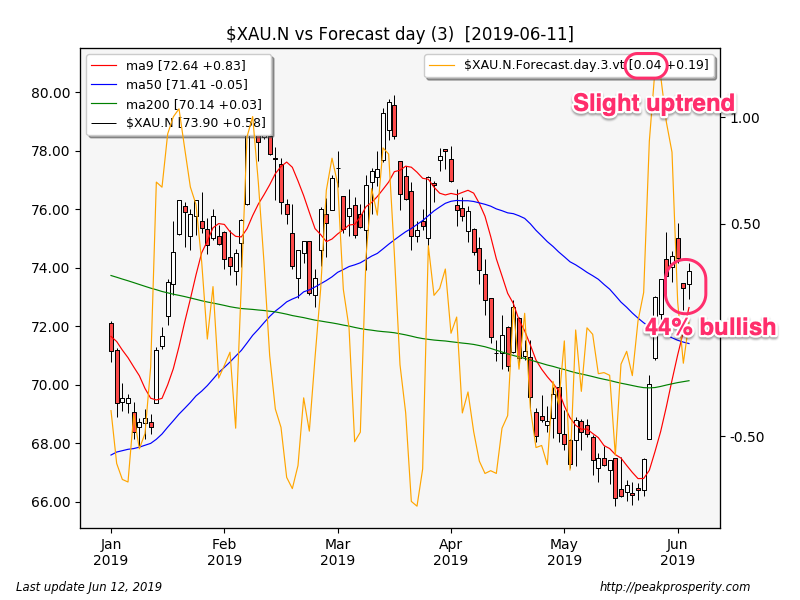 Platinum rose +0.96%, palladium climbed +1.15%, while copper moved up +0.26%. All 3 other metals are now in short-term uptrends right now, although copper had a bit of a failed rally today.

The buck fell -0.08 [-0.08%] to 96.14. The short black/NR7 candle was unrated, while forecaster inched lower, remaining in a downtrend. The buck remains in a downtrend in all 3 timeframes.

Crude fell -0.33 [-0.61%] to 53.36. The losses happened immediately following a bearish-looking API report (crude:+4.9m, gasoline:+0.8m, distillates:-3.5m). The short black/NR7 candle was unrated, and forecaster fell moving into a downtrend once again. Crude remains in a downtrend in the daily and weekly timeframes.

SPX fell -1.01 [-0.03%] to 2885.72. SPX rose strongly in the futures markets overnight, but started selling off just after the open, moving lower for much of the rest of the day. The bearish engulfing candle was bearish (49%), and forecaster fell, but remains in a reasonably strong uptrend. SPX remains in an uptrend in all 3 timeframes.

TLT rose +0.06%, the short white candle was a bearish continuation, and forecaster inched lower, remaining in a downtrend. TY barely moved, down -0.01%. The short white/spinning top was mildly bullish (30%) while forecaster moved slightly higher, and remains in a mild uptrend. TY is in an uptrend in all 3 timeframes. The 10-year yield fell -0.3 bp to 2.14%.

JNK rose +0.16%, gapping up at the open, then selling off during the day. The long black candle was mildly bearish (32%) and forecaster fell, but remains in an uptrend. The BAA.AAA differential rose 2 bp yesterday to 1.05%. Rate concern continues to slowly increase.

With the FOMC meeting coming up next week, my focus is on the prospects of a rate cut. Wolf Richter does a good job reading the tea leaves and while he doesn’t specifically outline what he feels in this article, it is very much suggesting that we may – or may not – get just a single rate cut in 2019. Contrast this with what the futures markets are projecting: 3 rate cuts by December 2019.

If the market figures out that the Fed isn’t likely to cut rates much, if at all, it would likely lead to a dollar rally, a PM correction, and probably a fairly brisk bond market correction also

Meanwhile, gold seems to have found a bid around 1325; today’s rebound looked strong, and the bounce continued into Asia after the US markets closed.

Last item: a demonstration of just how much people value of the Rule of Law in some parts of the world. Citizens of Hong Kong appear very worried about a proposed new law that would allow Hong Kong residents to be extradited to the mainland for trial. How upset are they? More than an estimated one million people marched this past weekend to protest the new law, which is being pushed by Hong Kong’s pro-Beijing administrator Carrie Lam. Population of Hong Kong: only 7 million people, which puts the participation rate of this protest at 14%.

An article, from Hong Kong’s paper of record, SCMP, illustrates the difference between the Mainland (where any mention of the 1989 Tienanmen protest has been wiped from collective memory) and the city of Hong Kong.  The SCMP is still allowed to publish articles like this.  For now:

A 70-year-old housewife, who only gave her surname as Wong, spoke for many when she said the government ought to respect the protesters enough to pay heed.  She pledged to join further protests if the government stayed silent.

“This is a draconian law,” she said, “and it will affect the future of our next generation.”