Gold more or less moved sideways today, printing a neutral-looking high wave candle. Gold forecaster rose +0.10 to +0.09, which is a tentative buy signal for gold. The GC.EUR chart is a bit cleaner – gold in Euros is trending a bit more strongly – and GC.EUR forecaster also issued a buy signal, up +0.15 to +0.11. 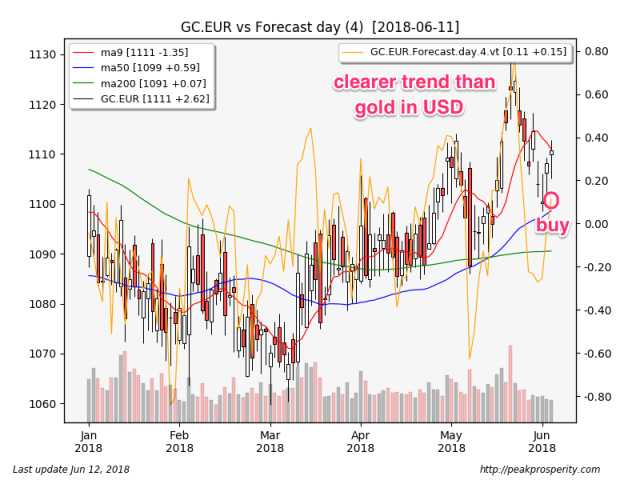 Silver rallied, then retreated, then rallied again into the close, printing a spinning top that was a bullish continuation. Silver made a new closing high, breaking more conclusively above its recent trading range. Silver’s forecaster fell -0.03 to +0.20, which is still an uptrend. I can’t say why the forecaster fell; perhaps it didn’t like the drop in copper prices. Silver is in an uptrend on the weekly, but a downtrend on the monthly timeframe.  The break above the trading range is a bullish sign.

COMEX SI open interest rose by 2,484 contracts today; that’s 6 days of actual silver production. Someone is still loading up short on silver.  Its a minor miracle that silver has managed to rally so strongly in the face of so much new paper. 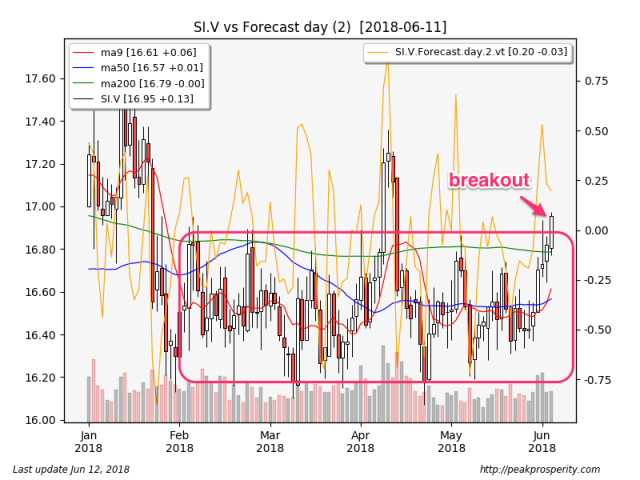 Miners rallied, with GDX up +0.85% on light volume, while GDXJ climbed +0.73% on very heavy volume. XAU forecaster rose +0.14 to to +0.24. While the miners still appear to be chopping sideways, the XAU forecaster is spending most of its time above 0 – which suggests that the trend bias is to the upside. The wedge pattern will eventually break in one direction or another, but the forecaster is hinting it will break up rather than down.

The GDXJ:GDX ratio moved down, while the GDX:$GOLD ratio rose. That’s neutral. 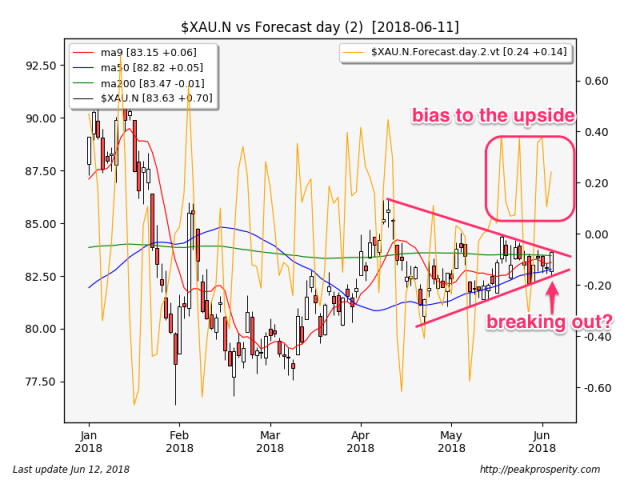 Crude rallied +0.49 [+0.75%] to 66.03. Crude initially sold off fairly hard, but buyers appeared and pulled prices back up again. Candle print was a spinning top, which was neutral, while forecaster fell -0.17 to +0.10. Crude does appear to be trying to put in a low here; there seems to be decent support at or around 65.

JNK rose +0.17%; that’s 5 days up of the last 6 sessions. It isn’t rallying quickly, but it is a steady move higher. JNK remains in an uptrend.

Silver has managed to break out of its trading range at long last, even without the help of copper.  Miners are hinting at a near-term breakout.  We’ll have to see how it turns out – PM has been pretty good at disappointing us in the past year or so, but right now things look at least somewhat promising.  Lastly – that gold-in-euros chart actually looks pretty good.  The 50 MA is acting as support, with higher highs and higher lows.  That’s an uptrend.

FOMC meeting starts tomorrow, with the announcement on Wednesday at 2pm, and a press conference at 2:30.  Almost certainly we get a rate increase, but the focus will be on what they say about the future.

There were a pair of interesting news items today.

First, Salvini, Italy’s new interior minister, refused to allow a boat with 629 migrants to dock at an Italian port.  After a day of back and forth, Spain agreed to allow the boat to dock in a Spanish port.  The people on the boat had previously been rescued from a number of unseaworthy boats, and brought to Italy by…what the Italian right calls a “migrant sea taxi.”  Strategy: if you can get on any sort of craft in Libya, paddle out past the 15-mile limit, then hopefully a “migrant sea taxi” will pick you up, and take you to Italy.  That’s how 500,000 migrants have ended up in Italy – and the electorate’s reaction to this is why Salvini is now minister of the interior.  How will this work out with the rest of the EU?  That’s the big question.

“We scored a point in our favor, but it’s not the end of anything,” Mr. Salvini said, arguing that economic migrants, whom he called “an army of fake refugees,” had for too long exploited Italy’s lax rules and hospitality. Mr. Salvini added that his goal was to stop the flow of refugees and to cut spending on migrant care. “We’ll solve identical problems for other ships,” he said.

Second, Trump met with Kim Jong Un, with smiles all around, and afterward signed some sort of mystery document.  How much is theater, and how much is reality?  Certainly, neither of them poked the other in the eye; both seemed to want things to move forward for their own reasons.  Only time will tell, but seemed like it was a promising start.

I’d say the Salvini item is gently euro negative, and the meeting in Singapore is dollar-positive.