Gold gapped down at the open, and made its day low just after Asia closed – it then chopped sideways for the remainder of the day. Intraday, the drop in gold was more or less lined up with the rally in the buck.  The swing high print was bearish (48%), and forecaster plunged sharply, dropping gold into a downtrend. This same thing happened to gold/Euros as well. Gold remains in an uptrend in the weekly and monthly timeframes.  Also – in spite of today’s drop and forecaster reversal on the daily chart, gold remains above all 3 moving averages.

COMEX GC open interest rose +14,968 contracts, or 7 days of global production in new paper. Someone is piling in short here. 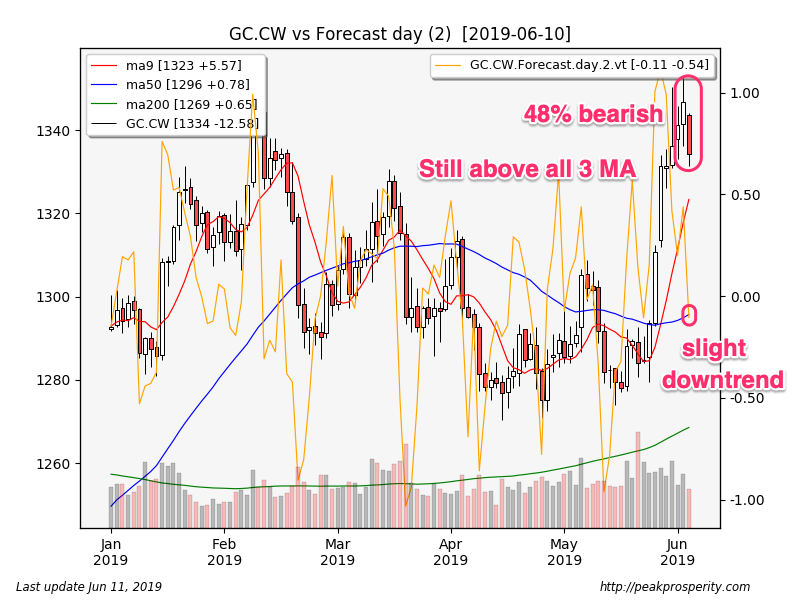 Silver had most of its losses happen in Asia also, but it made its day low around 1:20 pm, and rallied slightly into the close. Silver’s swing high candle was even more bearish (54%), and forecaster plunged, dropping silver into a downtrend.  Silver remains in an uptrend in the weekly and monthly timeframes, but today’s move pulled silver back below all 3 moving averages. 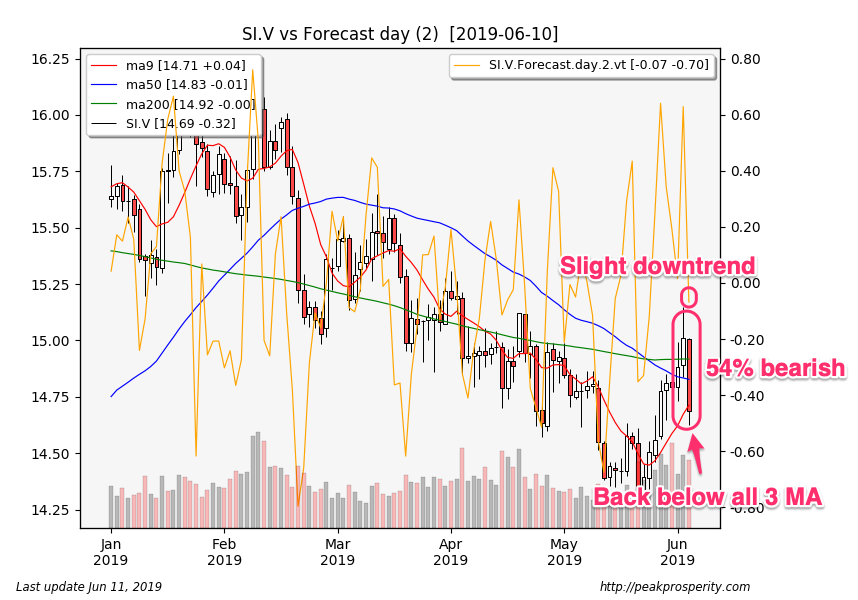 The miners gapped down hard at the open, sold off some more initially, then bounced back and then moved a bit higher into the close. GDX fell -1.88% on heavy volume, while GDXJ plunged -2.66% on extremely heavy volume. You can see that the juniors were hit a lot harder than the seniors today. XAU moved down -1.36%, the swing high pattern was bearish (47%), and forecaster fell, dropping into a downtrend. XAU remains in an uptrend in the weekly and monthly timeframes.  Note that XAU also remains above all 3 moving averages – just like gold. 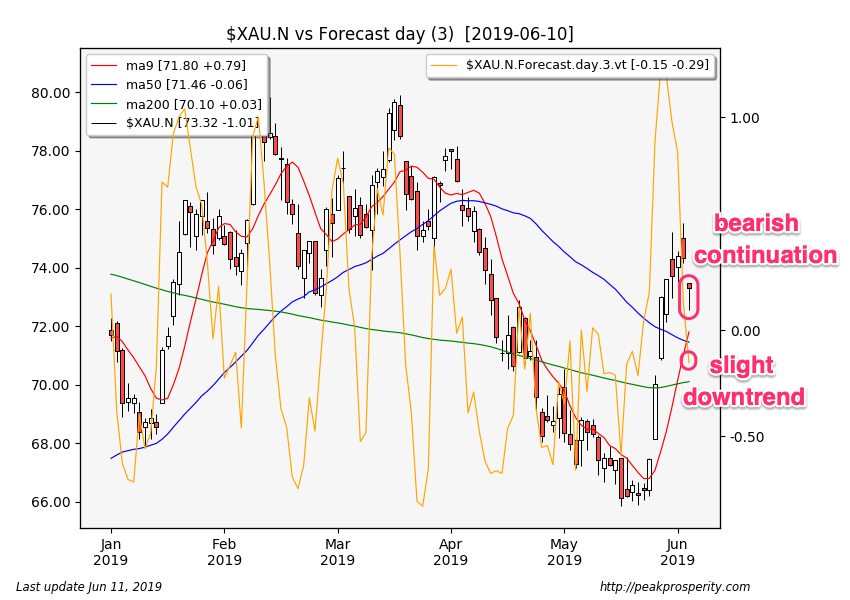 Platinum fell -0.11%, palladium climbed +1.63%, and copper jumped +1.42%. Copper’s rally didn’t help silver at all. Palladium is back in a clear uptrend, breaking convincingly back above its 50 MA just today.

Crude fell -0.55 [-1.01%] to 53.69. Most of the damage happened in the afternoon in the US. The long black candle was mildly bearish (32%), and forecaster dipped but remains in an uptrend. Crude is in a downtrend in the daily and weekly timeframes. The API report is due out tomorrow at 4:30 pm.

SPX rose +13.39 [+0.47%] to 2886.73. Equities gapped up in the futures markets overnight, attempted to move higher during the trading day in the US, but failed, dropping back into the close. The gap up doji was a bullish continuation, and forecaster dipped slightly but remains in a strong uptrend. SPX is now in an uptrend in all 3 timeframes.

TLT fell -0.94%, the swing high pattern was bearish (42%), and forecaster inched lower into a slight downtrend. TY fell too, losing -0.35%. It also printed a swing high (45% bearish), but forecaster inched higher, moving TY back into a slight uptrend. TY is in an uptrend in all 3 timeframes. The 10-year yield rose +5.9 bp to 2.14%. If bonds are going to correct, they aren’t in any hurry to do so. Still, it does look like the momentum in the bond move has stopped for now.

JNK rose +0.13%, the short white/spinning top candle was a bullish continuation, and forecaster remains in a strong uptrend. The BAA.AAA differential is currently at 1.03%, which indicates only a mild concern from the credit markets about the overall picture.

The markets started out the week in a risk-on mood, driven by Trump’s weekend success in his struggle to slow the flood of migration into the US – this time by using the threat of tariffs to get Mexico to assist. A large and powerful coalition wants the border to remain open: US corporations, their Democrat and Republican servants in Congress, the drug cartels, and the Mexican government, each for their own reasons. Only lower-wage US citizen workers benefit if the number of migrants entering the country slows down, and from what I can see, there is only one person even remotely showing an interest in helping US workers: billionaire Donald Trump. We live in a strange, strange world.

Anyhow, the relatively rapid, tariff-powered win seemed to walk back the risk-off mood seen last week. The buck moved higher, bonds fell, so did gold, silver, and the miners.  At the same time, the prospect for 3 rate cuts remains relatively intact.

After two strong weeks moving higher, it now looks like PM is going to correct.  Based on Monday’s plunge, silver may actually make new lows – it is already back below all 3 moving averages once more – while gold and the miners will probably hold up better.  Bonds continue to look quite strong; they have retraced, but not very far.  The market still believes in 3 rate cuts and a likely recession.

If the buck continues to rally, PM will most likely continue falling.  We’ll have to see where the bid for gold re-appears.  The large jump in GC open interest suggests that there are forces in the market that are eager to see gold move lower.  Normally we’d see commercials covering on such a substantial drop, but we didn’t see that today; the move higher in OI was quite substantial – about 30% of the BRExit event.

FOMC is coming up next week.  Gold sometimes likes to correct in advance of FOMC; perhaps this is happening again.  Certainly if the Fed is preparing to cut rates [18% chance] – or at a minimum signal a rate cut at the next meeting [81% chance] – “encouraging” the gold price to move lower in advance of such an announcement would seem to be good strategy, and a bunch of new paper [+15k contracts] would be just the thing to help prices move lower in advance.