Gold chopped higher today, jumping almost $7 just after the US market opened, but it could not keep all its gains through the close. The spinning top candle was unrated, but forecaster moved higher, moving back into a tentative uptrend. Today’s move was enough to pull the monthly back into an uptrend – by a slim margin anyway – which puts gold in an uptrend in both daily and monthly timeframes. Gold/Euros is in an uptrend in all 3 timeframes.

COMEX GC open interest rose 12,907 contracts. That’s 6 days of global production in new paper – the shorts continue to load up. Over the past two days, that’s half a BRExit – meaning, half of the 50k contracts dumped on gold the day after the UK voted to leave the EU. I’m always suspicious when OI jumps following some bad geopolitical news.

Futures are showing a 10% chance of a rate cut in June, a 41% chance of one rate-cut by December and an 17% chance of 2 rate cuts. That’s virtually no change from yesterday. 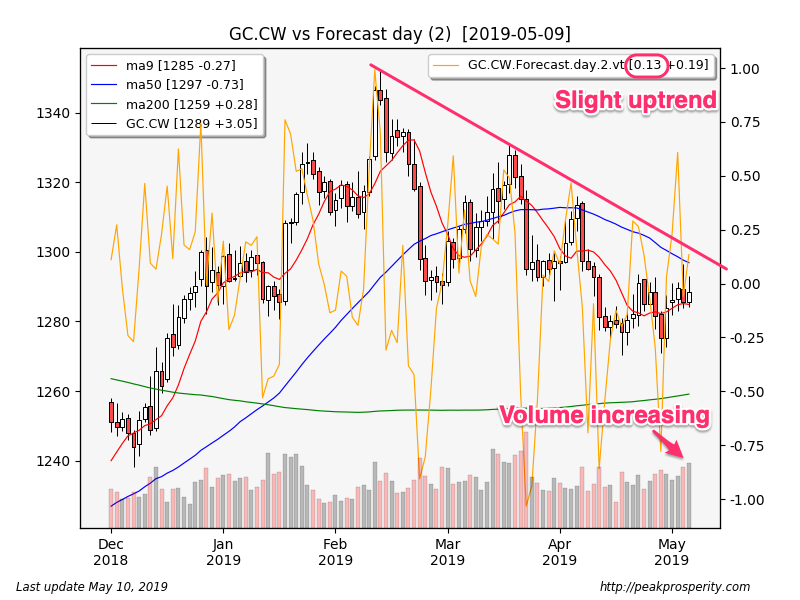 Silver fell in Asia and London, bottoming out when the US market opened, but silver’s rally wasn’t nearly as strong as gold, and silver also faded into the close. Silver’s long black candle was a bearish continuation, and while silver forecaster moved higher, it remains in a very slight downtrend. Today’s move was enough to pull the weekly into a downtrend also – which leaves silver in a downtrend on both daily and weekly timeframes. Intraday, silver looked as though it was moving alongside all of the other metals – platinum, palladium, and copper. 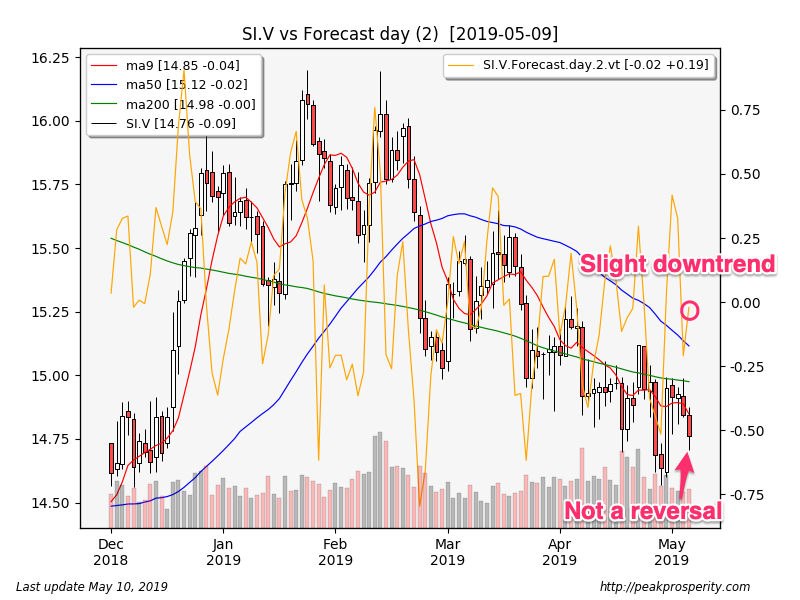 The miners rallied in the first 30 minutes of trading, reversed, and ended up closing at the lows. GDX fell -0.24% on light volume, while GDXJ dropped -0.31% on heavy volume. XAU fell -0.51% breaking down to a new low; the long black candle could be a reversal (35% bullish), and forecaster jumped higher but remains in a slight downtrend. XAU remains in a downtrend in the daily and weekly timeframes. 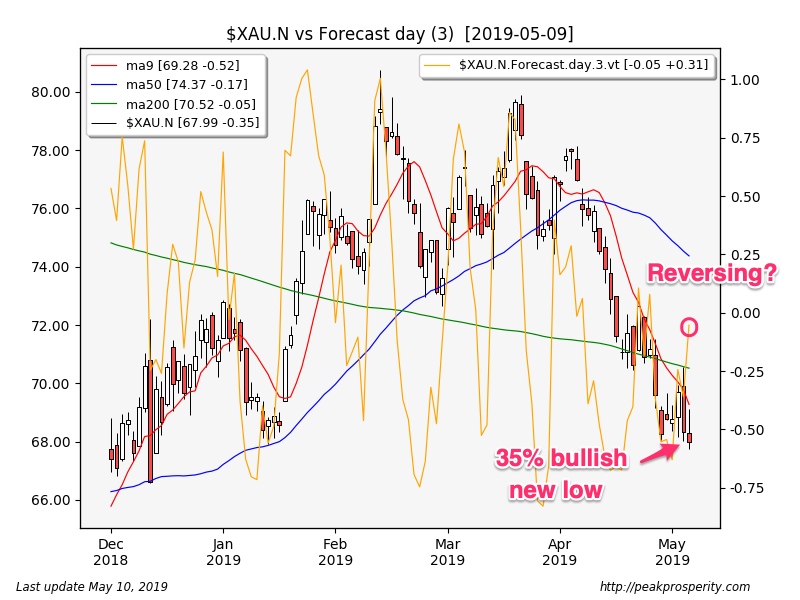 Platinum fell -1.46%, palladium dropped -1.61%, while copper moved down just -0.16%. To me it looked as if the metals all moved down roughly in unison today, with gold doing much better than the others. Copper remains the relative optimist going into Friday’s decision point over the China trade deal/25% tariff imposition.

The buck fell -0.23 [-0.24%] to 96.83. The move came right after the US market opened, when the buck spiked down hard in the first 30 minutes. The long black candle was a bearish continuation, and forecaster moved lower, pushing the buck into a downtrend. Today’s drop was enough to pull the monthly into a downtrend also – this puts DX in a downtrend in both daily and monthly timeframes, although the weekly still looks fairly bullish.

Crude fell -0.39 [-0.63%] to 61.72. The spinning top candle was unrated, while forecaster inched lower, pushing crude just barely into a downtrend. Crude is now in a downtrend in both the daily and weekly timeframes.

SPX fell -8.70 [-0.30%] to 2870.72. SPX fell in the futures markets overnight and kept dropping after the market opened, finally making its low just after 11 am, after which it bounced back strongly, recovering most of its losses by end of day. The hammer candle was mildly bullish (33% reversal), but forecaster continued moving lower, with SPX remaining in a medium-strength downtrend. SPX ended the day just above its 50 MA. The weekly forecaster continues to weaken, but as of now SPX remains in an uptrend in the weekly and monthly timeframes.

TLT rose +0.41%, with all of the gains coming on the gap-up open. The high wave candle was a bullish continuation, and while forecaster dropped, it remains in an uptrend. TY did quite well also, moving up +0.24%, with its opening white marubozu also being a bullish continuation, and TY forecaster rose, pushing it higher into a reasonably strong uptrend. The 10-year treasury yield fell -2.5 bp to 2.46% – at the same time, the 1-month yield has remained steady at 2.43%.

JNK fell -0.18%, making a new low, with the doji candle a bearish continuation, and forecaster dropping into stronger downtrend. Cousin HYB’s weekly trend remains positive, but it too might be in the process of reversing. The BAA.AAA differential has jumped +4 bp this week, signaling increased stress in the credit markets – the largest such move since early January, 2019.

I’ve been doing some thinking on the whole trade kerfuffle. Short term, it makes sense for the US government to insist on equitable treatment for US companies in China. However, if China is going to become a true world leader, they really require the rule of law. Currently their people work very hard, they have fantastic infrastructure, they have the support of their government and they have a fairly perceptive long term policy viewpoint on many key issues – but the one thing they seem to be missing is the rule of law.

Rule of law is required for true competition in the global marketplace. Otherwise, corruption rules, and that inevitably dulls the edge of any national champions.  Sure their companies do well inside their protected playpen, but they won’t be able to compete on the world stage.

And here we are, insisting – demanding! – they put this very thing in place! It is entirely possible that by this action, the US government may win the battle (by leveling the playing field) but lose the long-term war, by forcing China to adopt the one missing piece that helped Western Civilization to do as well as it has over the last 100 years.

If the US is successful in getting China to become less corrupt and more fair, in 10 years, will we regret it?   Trump might well be – unintentionally – helping to Make China Great Again!

Its just a thought.

Dave, you raise an interesting topic. I would argue that Chinese culture has a long history of rules and laws (ultimately tracing back to the Emperor) but everyone serves the interests of the emperor–now the Party, which has neatly replaced the Imperial structure with a party structure along similar lines.  Petty crimes are dealt with by a judiciary process that appears similar to western legal systems but once it becomes important–i.e. it reflects on the Party–then there is no real rule of law in China. Hence the 1 million uighur Muslims in concentration camps–oops, re-education camps….

In other words the “rule of law” will always be contingent in China rather than an absolute.  Hence the impossibility of a trade deal without the US holding unilateral rights to impose crushing tariffs if China backslide/ignores what they agreed to.

On a related topic I mention in this week’s podcast: China is the only wannabe-superpower that pegs its currency to another superpower’s currency. So how “super”is your power if you’re too weak and fragile to even have a free-floating currency? China Bulls have no answer, at least as far as I’ve seen.

The rule of law I’m referring to relates to the ordinary conduct of business, not the “managing the population” (concentration camps, etc) and other issues of social control.

As a foreign business, apparently you can’t even register your well-known trademark in China without running into difficulty – while local competitors have no such problem.  That’s the missing rule of law I’m talking about.

If the Chinese government continues to provide all these crutches to “fragile local business” (which, in reality, are just local business who pay the most to the bureaucracy to get their way), they’ll end up the worse for it over time.  Taking the long view, corruption provides a subsidy for the already-rich, in the same way that very low rates provide a subsidy for the current market leader in each sector.

Of course we also see this in the US – a corrupt Congress passes rules that harm new companies in favor of the big guys already in place, but in China, it appears to be much worse – or maybe its just much more visible.

My point was, if our actions ended up fixing this for them, through this trade deal, it would greatly help their competitiveness.  Are we sure we want this to happen?

If we project ahead to a long term competition with another nation – would you prefer that nation to be corrupt and thus inefficient (where the already-rich-fat-and-powerful can buy off any sort of innovative pressure that threatens their sinecures), or a terrifyingly efficient and competitive nation where only the tough and smart survive?

Arguably, the reason we won against the Soviet Union is because of its endemic corruption and limits of central planning, which doomed them to under-performance and eventual loss.