Gold sold off with the falling Euro, but started to rally at about 10 am, managing to end up even on the day.  Print was a doji candle, which was bullish. The forecaster fell -0.16 to -0.08, which is a sell signal for gold. Gold in Euros continues to rise – in fact, it appears to have staged a minor breakout above its previous high just today.  ON the chart, gold appears to have some decent support at the 200 MA. 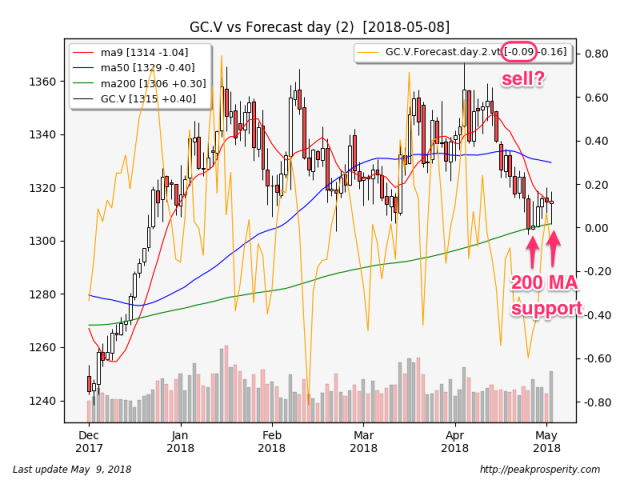 Silver also tried to sell off today, but bounced back fairly strongly, printing a neutral doji candle on the day. Forecaster jumped +0.19 to +0.11, which is a buy signal for silver. Silver is above the 9 MA, but below both the 50 and 200.  Silver really needs to move above that 50 to convince me that the selling is over. 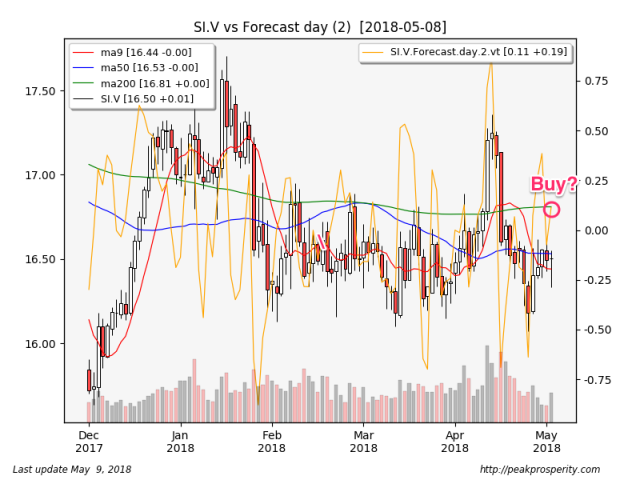 Miners sold off early, but came back strong in the afternoon; GDX rallied +0.13% on moderately heavy volume, while GDXJ moved up +0.21% on moderate volume. XAU forecaster climbed +0.07 to -0.21, which is still a downtrend.  Still, it was a strong day for XAU, which rallied +0.83%, coming back from a moderately large early loss.  I thought the miners looked pretty good today.  Maybe its a tell.

The GDXJ:GDX ratio moved up slightly, as did the GDX:$GOLD ratio. That’s neutral. 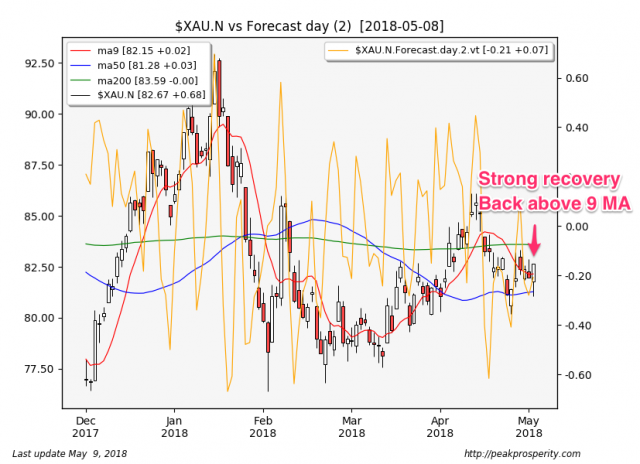 Platinum moved up +0.14%, palladium fell -0.19%, and copper dropped -0.11%. That’s not much movement. Palladium issued a sell signal, and platinum is quite close to doing so also. Copper had a very large trading range – it sold off hard, but bounced back strongly as well.  The move in copper wasn’t about Iran.

Crude moved up +0.04 [+0.06%] to 70.01, selling off hard (off more than $2) on a rumor that the Iran deal would stay in place, only to rally sharply back once the US pullout was announced. Volume was immense. The doji candle was bullish, but forecaster fell -0.38 to +0.20. That’s still an uptrend, but forecaster didn’t seem to like the long lower shadow on today’s candle.

JNK moved down -0.11%; JNK remains in a slight downtrend.

While the Iran announcement caused a lot of volatility, most everything just ended back where it started from – so not a lot happened today.

Bonds are starting to weaken once more; we may see a move through 3% in the near future. The trend is in favor of this outcome – the 10-year rate is in a uptrend in both weekly and monthly timeframes.

Gold in Euros is continuing to improve. If it continues, that should help gold avoid moving lower if the buck continues to rally.  The daily charts in the metals look ok, given how well the buck has done.