Gold actually sold off a bit in Asia and London, bottoming out at around 8:30 am, after which it rallied steadily through the close. The spinning top was a bullish continuation, and forecaster jumped higher, moving gold into a strong uptrend. Gold remains in a downtrend in the weekly and monthly timeframes. Gold/Euros is in an uptrend in all 3 timeframes.  Gold’s daily uptrend looks substantially stronger after today – gold rallied along with the dollar, which is a positive sign.

Futures are showing a 7% chance of a rate cut in June, a 40% chance of one rate-cut by December and an 15% chance of 2 rate cuts. That’s no change from yesterday. 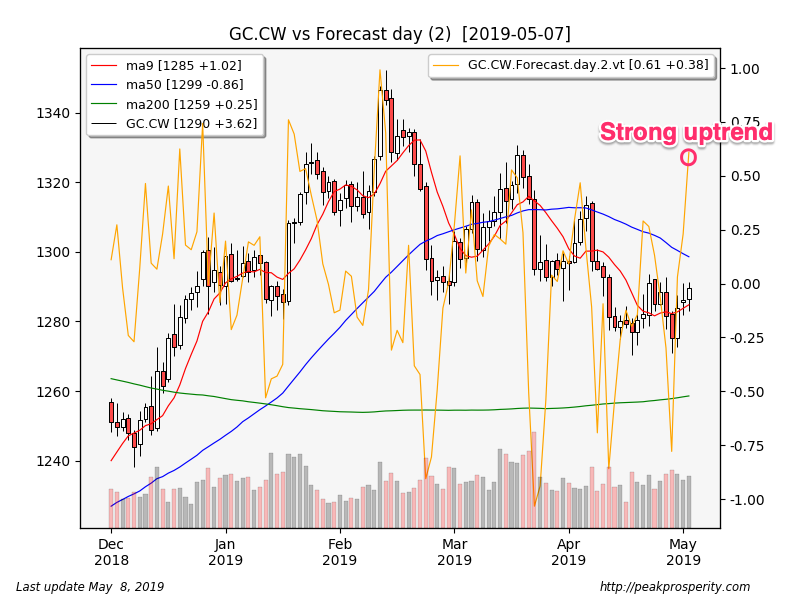 Silver followed gold’s track, but the rally following the 8:30 am low wasn’t nearly as strong. The doji/NR7 candle was unrated, and forecaster inched lower but remains in a reasonably strong uptrend. Silver remains in an uptrend in all 3 timeframes.  No meaningful change today for silver.  Compared with copper, silver is actually doing well. 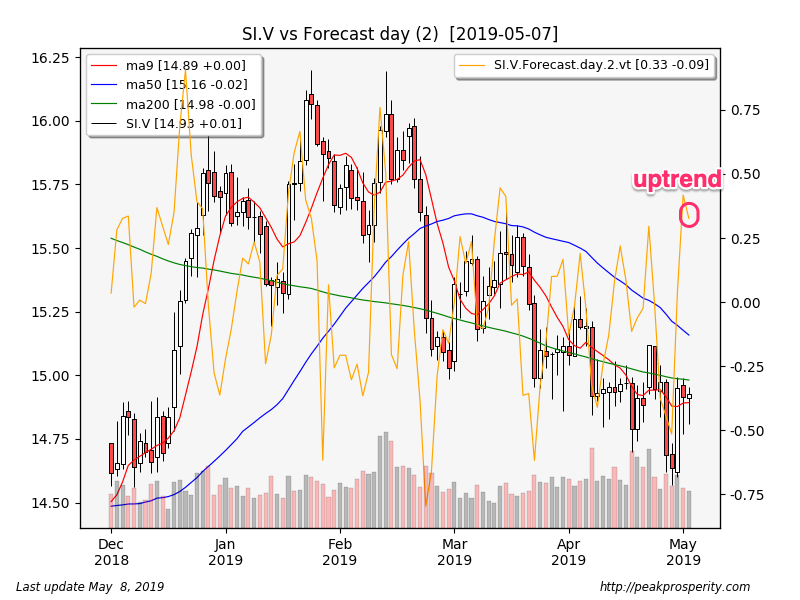 The miners edged lower for the first 45 minutes of trading, and then just took off, moving higher for the rest of the day. GDX was up +2.02% on moderately heavy volume, and GDXJ climbed +2.14% on heavy volume. XAU rallied +1.34%, the long white candle was quite strong for its type (42% bullish), and forecaster moved higher but not enough to move XAU into an uptrend. (Both GDX and GDXJ did flip into an uptrend today – and their candle patterns were both 50% bullish). In spite of the rally, XAU remains in a downtrend in the daily and weekly timeframes.  XAU also printed a 4-candle swing low – it sure took its time printing that pattern.  Is it really a reversal?  Maybe it is. 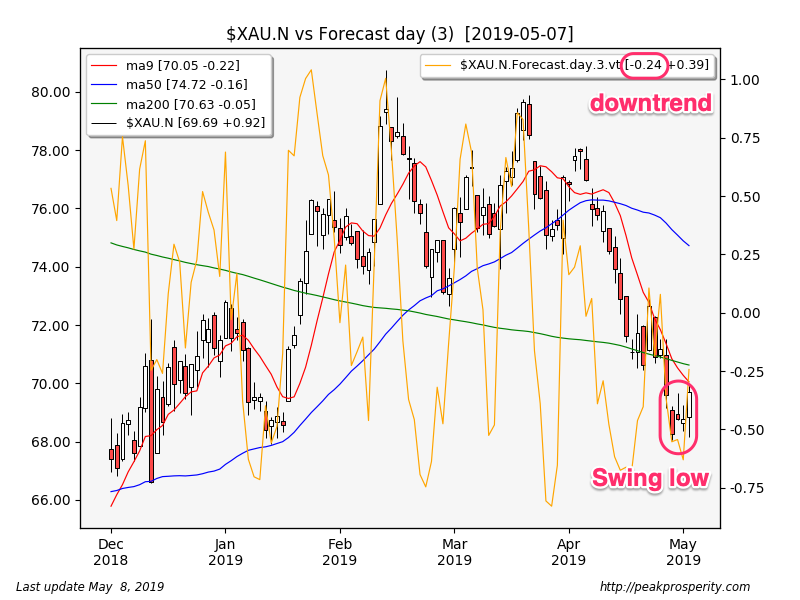 Platinum fell -0.58%, palladium dropped -1.08%, while copper plunged -1.84%. While yesterday was a study in relative complacency, that stopped today, especially in copper – traders sold yesterday’s rally and then some.  Copper has flipped back into a daily downtrend.

The buck rose +0.12 [+0.12%] to 97.07. The spinning top was a bearish continuation, but forecaster jumped higher, moving the buck back into an uptrend. The buck is now in an uptrend in all 3 timeframes.

Crude fell -1.08 [-1.72%], making its day low around 10 am, moving lower roughly alongside equities. The spinning top candle was unrated, while forecaster actually moved higher, but remains in a mild downtrend. Crude remains in a downtrend in both the daily and weekly timeframes.  The crude move looked more or less tied to the US-China trade negotiations.

SPX plunged -48.42 [-1.65%] to 2884.05. SPX started moving lower an hour after market close yesterday, and then started down more seriously at 9:30 am.  SPX sold off all day long, making the day low right around 3:30 pm, and it then they bounced sharply higher into the close – some 37 points in the last 30 minutes. One trader warned: “beware of overnight tweets!” The opening black marubozu could be a reversal (38% bullish), but forecaster dropped hard, flipping into a downtrend. That’s the first daily-chart downtrend move since mid-May. SPX remains in an uptrend in the weekly and monthly timeframes.

VIX screamed higher, up +3.88 to 19.32. That is 7 points in 2 days for the VIX. Yesterday’s VIX move was quite possibly the tell as to where things were really going.

JNK plunged -0.58%, which is a new low for JNK. JNK remains in a downtrend, although it looks fairly mild, at least for now.

The markets started to get nervous for real today about the US-China trade situation. What changed?  Well, SCMP reported that while Liu He would travel to Washington, the trip would be shorter than expected, and China’s state media also said that “there will be no more concessions.” I wondered – did that apply to concessions previously made, but subsequently backtracked upon?

Then I read this:

Sources said President Xi Jinping earlier vetoed extra concessions proposed by his negotiators. “Xi told them ‘I’ll be responsible for all possible consequences’,” one of the sources said.

Chinese negotiators subsequently presented a tougher proposal to Washington, although it is not clear if they pitched an amended proposal to Xi after the latest round of talks in Beijing last week.

Reading the tea leaves – that’s a “yes”.  Backtracking was done under orders from Xi Jinping himself.  This annoyed the American team, who told Trump, who also got annoyed, and the result was a 25% tariff tweet.  Scheduled for Friday.

So given this information, the sell-off makes sense. There may well not be an agreement, since China’s backtracking was explicitly ordered by Xi.

So to summarize: the deal that looked almost-completed last week now looks as though it may well not happen.  Another section of the SCMP article suggested that China felt its stimulus might well be able to counteract any negative impact from the tariffs.  It is likely that China will ramp up stimulus if the trade talks fall apart.  That won’t stop companies from leaving China to avoid both high costs and now 25% tariffs, but it will cushion the blow for Chinese consumers.  [Longer term, the nations that border China will be the real winners – Vietnam, Thailand, Indonesia].

It appears as though China really doesn’t want to give up its “emerging market nation status” benefits, even though they are now the world’s manufacturing superpower.   Swiping IP from the foreigners through forced partnerships – then turning around and using that IP to manufacture cheaper products of their own, that’s a good deal.  It will only end when someone like Trump comes along and insists that the free ride is over.

We will know more by Friday, but I think there’s a decent chance this deal is toast, given that the order to backtrack came from Xi himself.

The market is not prepared at all for this outcome.