Gold moved lower for the first part of the day, but around 8 am the rally started; gold jumped about $12 in 3 hours, ending the day near the highs. The long white candle was a bullish continuation, and forecaster moved into an uptrend. Today’s move was enough to flip the weekly into an uptrend as well. This puts gold into an uptrend in all 3 timeframes.

Futures are showing a 13% chance of a rate cut in June, a 32% chance of one rate-cut by December and a 57% chance of 2 or more rate cuts. That’s a huge increase in the 2-rate-cut probability assessment. 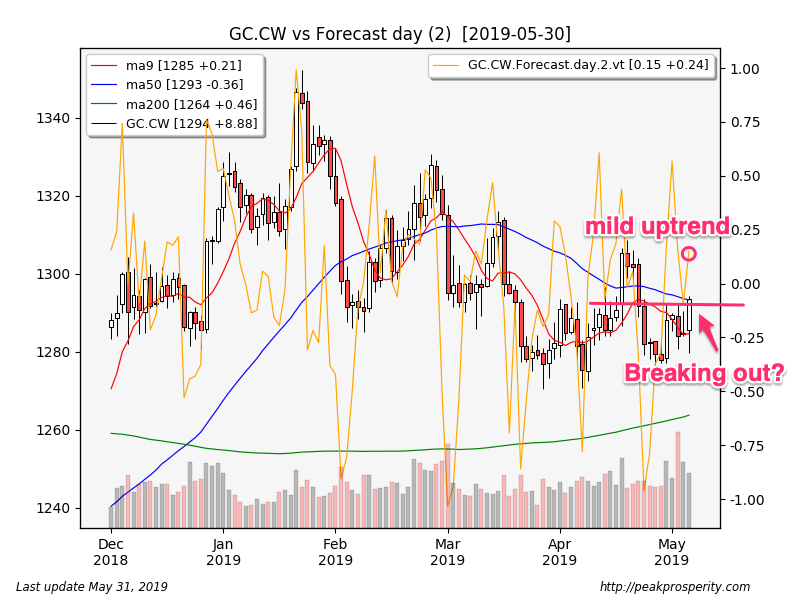 Silver’s rally also started around 8 am, topping out around 3 hours later. The long white candle was neutral, and forecaster moved higher, but it remained in a downtrend. Silver did manage to close above the 9 MA, which is a positive sign, but silver remains in a downtrend in all 3 timeframes. No reversal for silver today.

The gold/silver ratio was unchanged at 88.97. 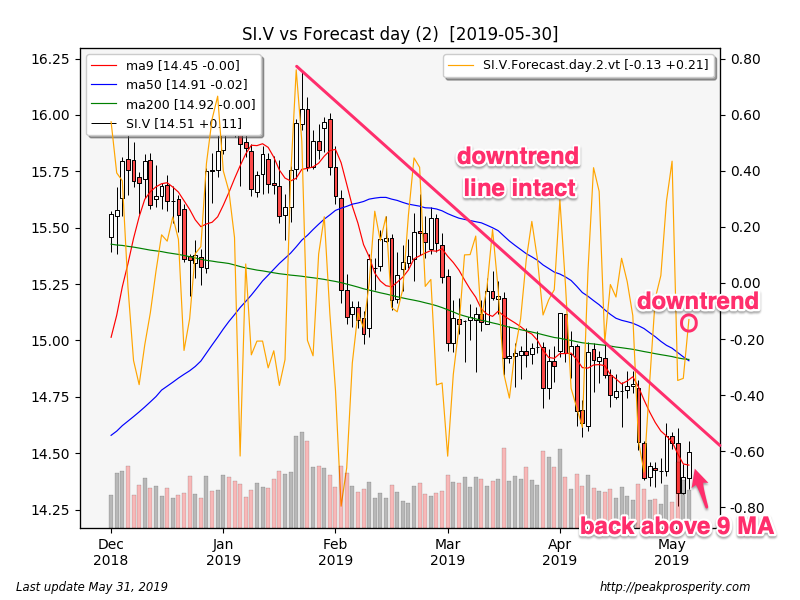 The miners rallied all day long, closing near the highs. GDX climbed +1.71% on moderately light volume, while GDXJ rose +1.93% on heavy volume. XAU moved up +1.58%, the confirmed bullish NR7 looked very strong (48% bullish), and forecaster moved higher into an uptrend. It was also a swing low. The move was enough to pull the weekly into an uptrend also, and XAU ended the day convincingly above its 9 MA, for the first time in nearly two months. XAU is now in an uptrend in all 3 timeframes. This is a fairly convincing reversal for the mining shares. 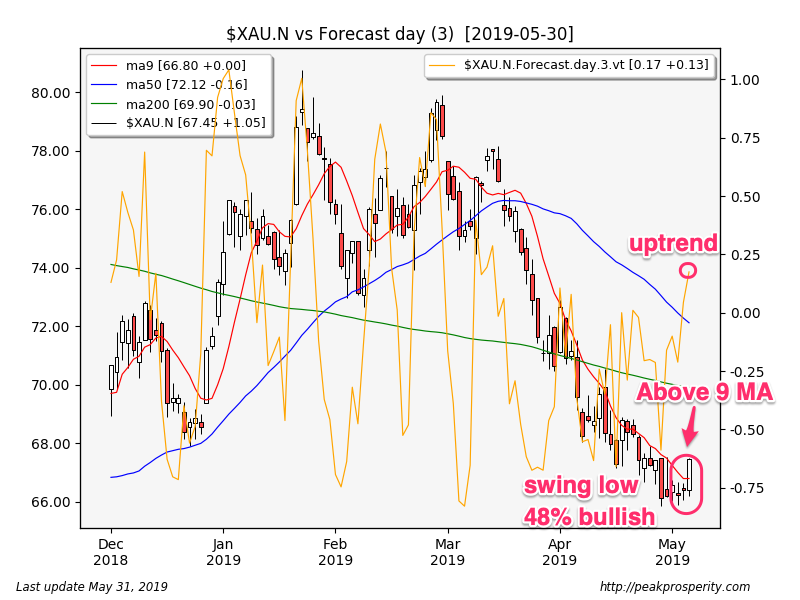 Platinum rose +0.30%, palladium jumped +1.99%, while copper fell -0.62%. That’s yet another new low for copper, palladium appears to have broken out of its recent trading range, while platinum – no reversal for platinum just yet. It remains in a downtrend.

The buck inched up +0.01 [+0.01%] to 97.59. The buck tried to rally today but failed. The doji candle was a bullish continuation, and forecaster moved higher into an uptrend. According to the forecaster, the buck remains in a downtrend in both the weekly and monthly timeframes – but it sure looks as though it is getting ready to break out higher to me.

Crude was smashed today, plunging -2.65 [-4.48%] to 56.54. Almost all of the damage happened immediately following the EIA report (crude: -0.3m, gasoline: +2.2m, distillates: -1.6m). The EIA report was significantly less bullish than Wednesday’s API report. Crude’s closing black marubozu was a bearish continuation, and forecaster dropped hard, falling into a strong downtrend. This totally wipes out yesterday’s reversal. Crude is back in a downtrend in all 3 timeframes. 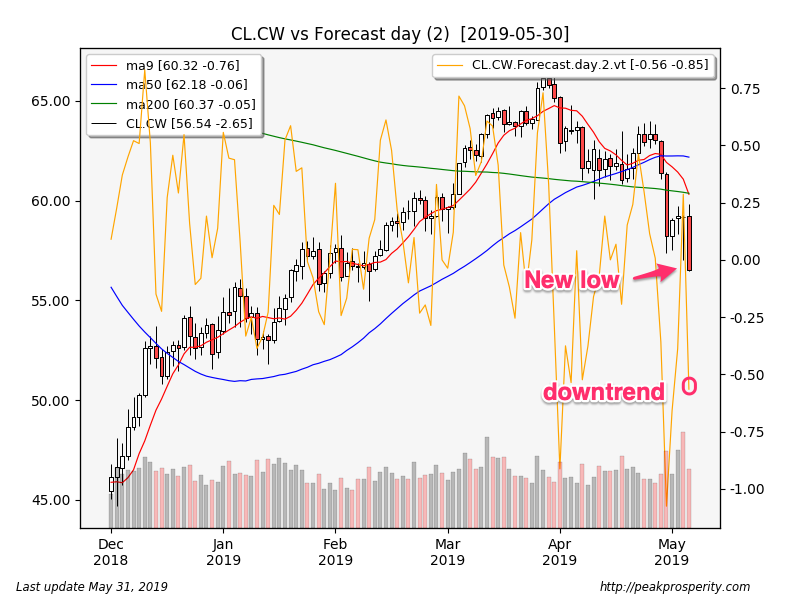 SPX rose +5.84 [+0.21%] to 2788.86. All of today’s minor gains came in the futures markets overnight. The long legged doji was a bearish continuation, and forecaster moved higher but remains in a strong downtrend. SPX remains in a downtrend in both daily and weekly timeframes. SPX appears to have support right at the 200 MA.

TLT jumped +0.86%, making a new multi-year high. The closing white marubozu is a bullish continuation, but forecaster fell, remaining in an uptrend, but not by much. TY climbed +0.29%, also printing a closing white marubozu – bullish continuation – and forecaster was unchanged, remaining in an uptrend. The 10-year yield fell -3 bp to 2.22%.

The remarkably strong move lower in crude comes at a time when managed money is reducing its long exposure to crude.  In other words, the longs are being rinsed in the same way that tends to happen in gold & silver.  From looking at the COT report, this process is perhaps half over, which suggests – absent any geopolitical events – oil could end up at around $50 within the next few weeks.  Of course, a strong EIA report could overpower the current trend, but without such a report, it seems as though crude prices are going to move lower.

I’m also seeing a big divergence in the extremely strong rallies in the 10-year treasury, and the relatively leisurely move lower in junky debt.  Normally, the near-panic into safe haven debt would be accompanied by a near-panic out of crappy debt, but that’s just not happening.  Likewise, the drop in equities is also happening in a fairly leisurely manner.  Perhaps it can be explained by capital flows – from the rest of the world, into the US.  Thats a safe haven move within a safe haven move.

The miners appear to have put in a reversal today; the daily-chart pattern is pretty convincing.  Gold looks even stronger than the miners, while silver has yet to meaningfully recover.  Perhaps the endlessly-falling copper prices are keeping silver from moving higher.

Trigger for the breakout?  Trump’s 5% tariff announcement on Mexico.