Gold tried to rally, but the rally failed. The doji candle was unrated, but forecaster wasn’t happy, and dropped into a downtrend. Gold is now in a downtrend in both daily and weekly timeframes.  Is gold’s reversal unwinding?  It might be.

COMEX GC open interest fell -46,275 contracts. This is likely due to the upcoming first notice day for the June futures contract. 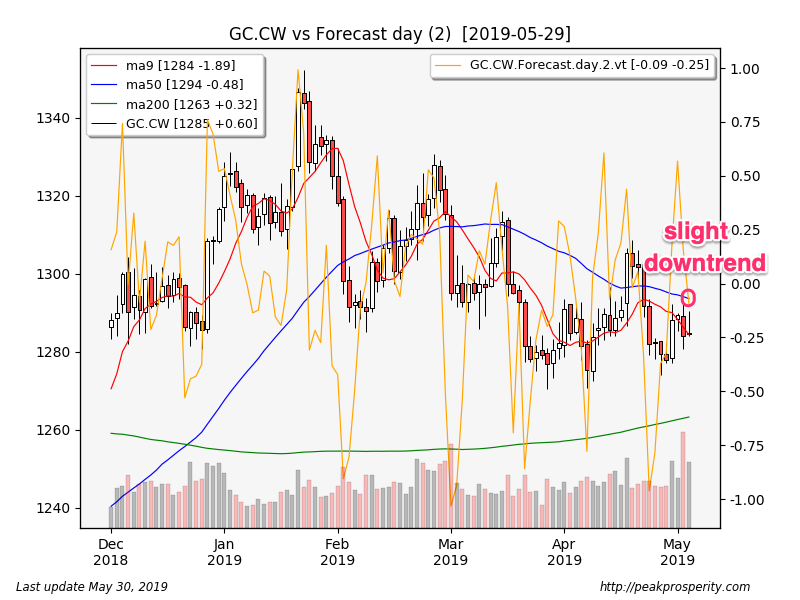 Silver moved higher for much of the day, but was only able to recover a small part of yesterday’s losses. The bullish harami pattern was mildly bullish (32%), but forecaster barely moved, and remains in a downtrend. Silver remains in a downtrend in all 3 timeframes. No reversal for silver today. 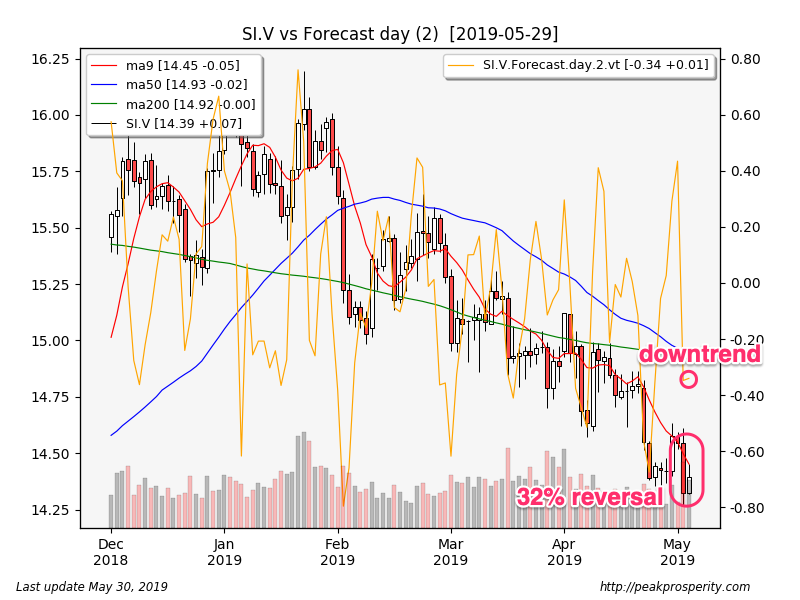 The miners opened higher, but moved down in the first few hours, and then traded sideways for the rest of the day. GDX was unchanged on moderately light volume, while GDXJ fell -0.18% on moderately heavy volume. XAU rose +0.24%, the doji/NR7 candle was unrated, but forecaster jumped higher, finally moving into an uptrend. This puts XAU in an uptrend in both daily and monthly timeframes, although the strength of the trends right now is fairly weak.  Is XAU forecaster jumping the gun?  XAU remains below the 9 MA.  We probably need a swing low before calling the reversal for XAU. 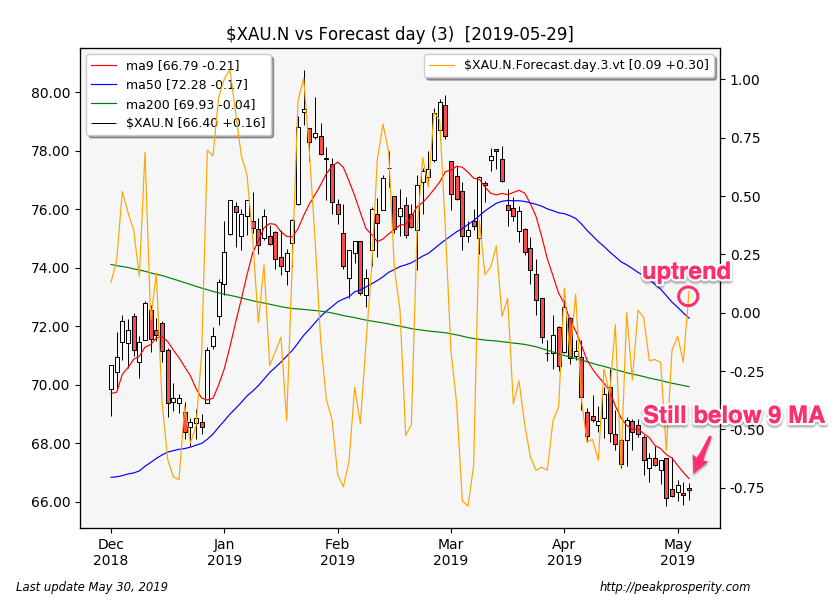 Platinum fell -0.81%, palladium rose +0.37%, and copper dropped -1.11%. This is another new closing low for copper, and a new low for platinum, while palladium appears to be recovering – moving back into an uptrend. Continually dropping platinum and copper prices aren’t so helpful for a gold & silver recovery.

The buck rose +0.19 [+0.20%] to 97.58. The long white candle was a bullish continuation, and forecaster moved into an uptrend. The buck appears to be heading for a breakout once again. The buck remains in a downtrend in both the weekly and monthly timeframes – I’m not sure why that is.  To me, eyeballing the chart, the buck is just days away from breaking out to new highs.

Both GBP [-0.26%] and EUR [-0.31%] are moving steadily lower, and are set to break down more dramatically in the near future. I believe this continues to be all about BRExit. The EU “won the battle” in the negotiations with May (Barnier’s gleeful victory lap enumerated by Mish here: https://moneymaven.io/mishtalk/economics/let-s-discuss-brexit-and-how-the-eu-bragged-on-film-about-screwing-the-uk-9W7AB-awoEK5YleA7457wg/ ), but they may be on the cusp of losing the war. After the massive victory of the BRExit Party during the EU elections, and the subsequent resignation of May, the UK establishment is staging what may be their last-ditch effort to collude with the EU and for all intents and purposes, keep the UK a “colony”, by charging Boris Johnson with a crime in order to derail his chances of becoming PM. Does this remind anyone of “Russian Collusion”, namely, using the legal system to destroy or derail a candidate they would prefer not to have in office? It sure looks like it to me.

I believe this issue will be the primary driver for USD (EUR, and GBP) – at least, until it gets resolved.

Crude inched down -0.05 [-0.08%] to 59.19. Crude fell for most of the day, making a new low at 56.88 at about 11:30 am, and then bouncing back very strongly into the close. The dragonfly doji was a bearish continuation (!) but forecaster screamed higher, moving crude right back up into an uptrend. Volume was immense – the highest volume in six months. Crude is now in an uptrend in both daily and monthly timeframes. Is this a reversal for crude? It sure could be. The volume was incredible, and the bounce was very strong.  However the candle code seems to want to wait until tomorrow to mark a reversal. 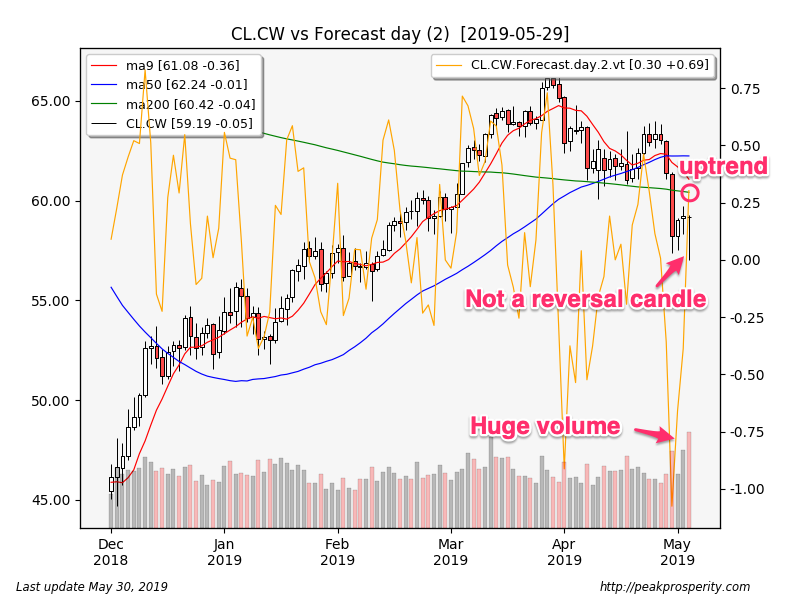 SPX fell -19.37 [-0.69%] to 2783.02. Almost all of the losses came in the futures markets overnight; SPX fell further during the trading day, but regained most of those losses by the close. In spite of the recovery during the day, the hammer candle was a bearish continuation, and forecaster moved even lower, dropping SPX into a very strong downtrend. SPX remains in a downtrend in both daily and weekly timeframes – and that bearish engulfing on the monthly (which closes on Friday) looks really horrid – it is currently a very highly rated pattern – a 76% reversal.

Sector map was led lower by utilities (XLU:-1.33%) along with REITs (XLRE:-1.15%), while materials (XLB:+0.02%) and financials (XLF:-0.19%) did best. This was not a bearish sector map. I’m not sure why the high-yielding utilities are selling off – but they’ve been pounded over the last two days, right after making a new all time high.

TLT rose +0.23%, gapping up at the open, but then selling off for most of the day. The long black candle was a bullish continuation, but forecaster moved lower – still leaving TLT in an uptrend. TY looked worse, trying to rally but failing; the gravestone doji/northern doji was somewhat bearish (38%), and forecaster dipped but remains in an uptrend. TY remains in an uptrend in all 3 timeframes, but we may be nearing the top for this move in bonds. The 10-year yield fell -3.2 bp to 2.24%.

JNK fell -0.28%, a fairly strong move lower. JNK remains in a downtrend. , which appears to be a new low, but JNK does not look as though it is in any sort of hurry to move lower. JNK remains in a downtrend. BAA.AAA differential fell -2 bp yesterday; there was some fairly strong buying in BAA debt yesterday. This can be confusing since this series is one day delayed.

Mixed news out of the metals today; gold may be heading lower again, silver is showing a low percentage reversal, while the miners may also be ready to reverse.  That said, falling copper and platinum suggest the metals will probably continue moving lower, assisted by the rising buck which may be ready to break out to new highs once again.

SPX continues to correct – not in any big hurry, but the daily downtrend is quite strong, and today shows no hint of reversal.  Money continues to move into bonds, and out of risk assets.  The current 10 year yield is at 18 month lows.