Although the US had a holiday on Monday, the futures markets traded normally. However my data source combined the two days of price action into one “Tuesday” candle, which accounts for the abnormally heavy volume in both gold and silver.

On Tuesday, gold took a leg down early in Asia, and then another somewhat larger drop starting roughly at 8am. The confirmed bearish NR7 was actually neutral – not bearish – and forecaster dipped but remains in an uptrend. Gold remains in an uptrend in both daily and monthly timeframes. Gold’s drop today took price below the 9 MA.  Although gold fell about as much as the buck rallied, the move lower in gold was not caused by a currency market move.

Futures are showing a 10% chance of a rate cut in June, a 38% chance of one rate-cut by December and a 46% chance of 2 or more rate cuts. At least 2 rate cuts seem to be baked into the cake at this moment. 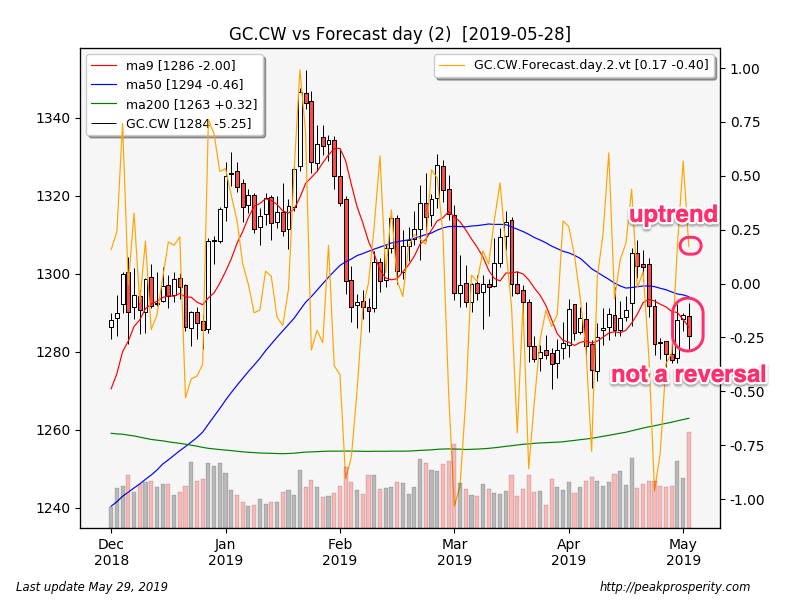 Silver started dropping in Asia, and then fell off a cliff at 8 am, plunging to a new low of 14.27 at 8:45 am, and then slowly rebounding into the close. The long black candle was bearish (31% reversal), and forecaster dropped hard, pulling silver back into a downtrend. Silver is back into a downtrend in all 3 timeframes. The strong rally/stronger plunge pattern started in January and has continued through today.

COMEX SI open interest jumped +9,185 contracts, about 21 days of global production in new paper. This was a huge increase – probably managed money piling in as prices dropped. Or maybe managed money piled in and caused the price drop, its hard to know for sure. At some point this plunge will exhaust itself, and the snap-back will be incredibly intense as the shorts flee in panic – but how far down must we go first?  That is the question. 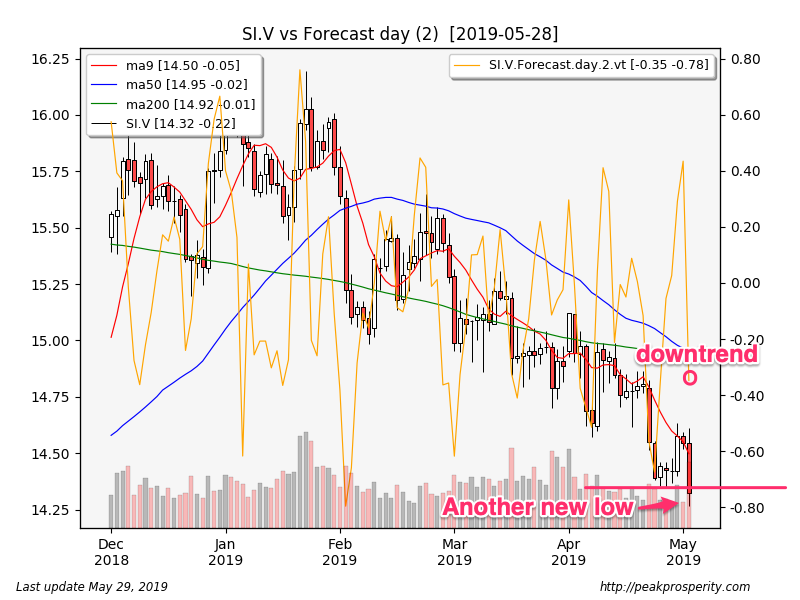 The miners gapped down and then traded in a relatively narrow range today; GDX fell -0.73% on moderately heavy volume, and GDXJ dropped -0.64% on moderately volume. XAU moved down -0.48%. The southern doji candle was a bearish continuation, and forecaster inched lower and remains in a slight downtrend. Forecasters for both GDX and GDXJ are now in slight uptrends. XAU avoided making a new low. The pace of the decline has slowed to a crawl; XAU is in a downtrend in both daily and weekly timeframes, and the monthly is in a slight uptrend. In spite of the heavy plunge in silver today, the miners appeared to have a reasonably strong bid. 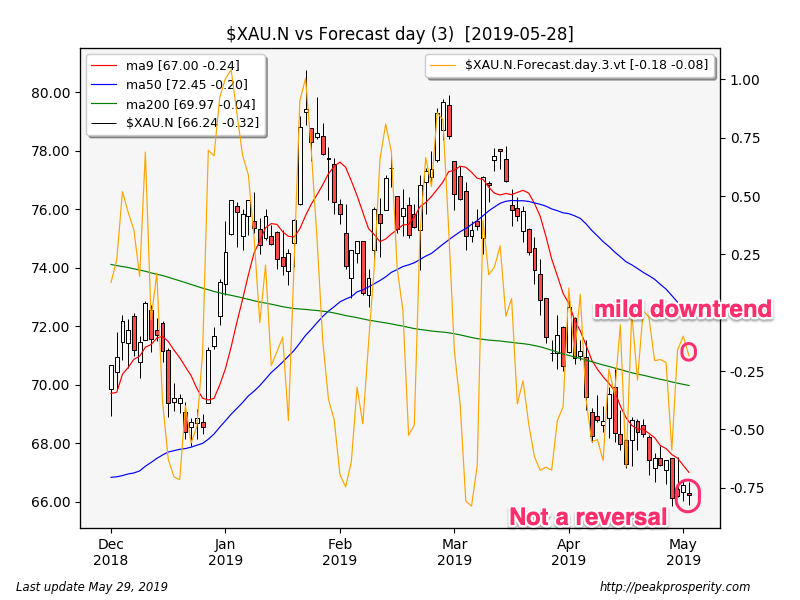 Platinum fell -0.78%, palladium rose +0.45%, and copper was mostly unchanged at -0.04%. Both platinum and copper are trying to figure out if their declines are over. Longer term charts suggests – probably not.

The buck rallied +0.35 [+0.36%] to 97.39. The confirmed bullish spinning top was bullish (58%), but forecaster barely moved, and remains in a downtrend. Weekly forecaster was more excited, jumping into an uptrend; this leaves the buck in a downtrend in daily and monthly timeframes.

SPX fell -23.67 [-0.84%] to 2802.39. SPX rallied in the first 30 minutes of trading, and then fell for the remainder of the day, making a new low, and then closing at the lows. The closing black marubozu was a bearish continuation, and forecaster inched higher but remains in a strong downtrend. SPX remains in a downtrend in both daily and weekly timeframes.

JNK inched down -0.04%; it was a new low, but JNK does not look as though it is in any sort of hurry to move lower. JNK remains in a downtrend. BAA.AAA differential jumped 4 bp, and has now reversed into an uptrend. The credit market is starting to get concerned. That’s because of selling in BAA debt last Friday. (BAA & AAA are provided with a 1-day delay). A 4 bp move in the differential is a fairly large move.

CRB rose +0.91%. 3 of 5 sectors moved higher, led by agriculture (+3.04%). That’s probably because of the flooding damage done to crop plantings in the midwest.

So with the SPX making a new low, why didn’t gold rally along with bonds?  That I don’t know.  The pattern seems to have changed.  Perhaps it was all the official intervention that stuffed the rally back when the trade talks failed?  I’m really not sure.  Regardless, all of the safe haven flows right now are into bonds – treasury bonds, mostly.

Lower grade credit is starting to see outflows now, and the market is now projecting at least two rate cuts by December.  This really should be helping gold, at least theoretically, but it just isn’t.  While gold isn’t really being hurt, neither is it taking off.

Silver continues to be smashed regularly by managed money.  The new low to 14.27 dates back to last November.  There is a rough support zone around round number 14, so if we continue to plunge, there should be some support there.  By then, the overhang of managed money shorts should be immense.   Timewise – perhaps that’s another month away.