In addition to the news about the new Italian government, at 2pm the Fed released its minutes from the previous meeting; I’m not sure what the market-moving bits were, but equities rallied, as did gold just after the release.

Gold made a new high today, to 1298.40, but fell soon afterwards. Mostly, gold ended the day unchanged, although gold did move higher following the FOMC minutes release. The spinning top candle was neutral, and the forecaster shot up +0.31 to +0.29, which is a buy signal for gold. I agree with the forecaster; gold in Euros rose +0.79%. 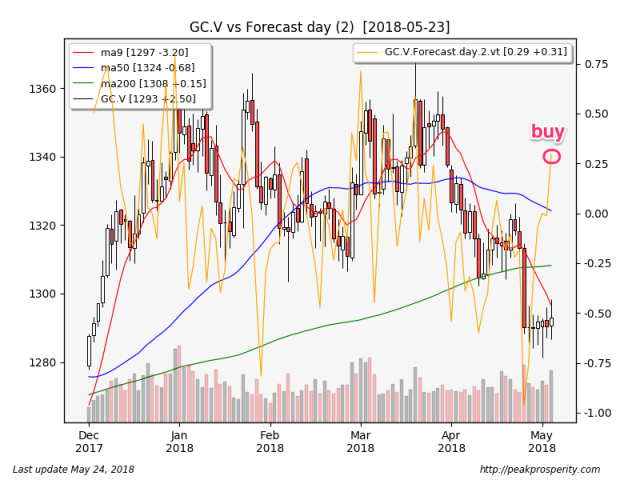 Unlike gold, silver moved slowly lower, dropping hard soon after 8 am. Silver did bounce back, but not enough to move back into the green. The spinning top candle was bearish (31% reversal), and the forecaster dipped -0.11 to -0.04, which is a sell signal for silver. Mostly, silver has been chopping sideways; things are pretty directionless right now. Silver is now back below all 3 moving averages. 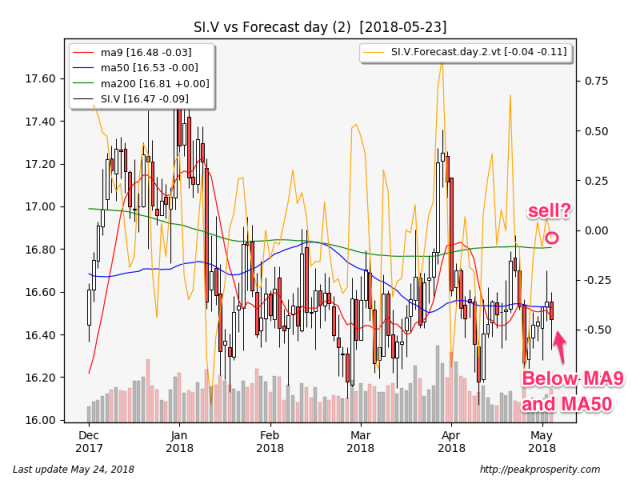 Miners moved up fairly strongly today, with GDX up +0.95% on moderate volume, and GDXJ rallied +0.85% on moderately heavy volume also. Both ETFs printed bullish belt hold candles, which had a roughly 39-48% chance of marking the low. XAU forecaster wasn’t as impressed, edging down -0.05 to +0.02. I think its a good sign that the miners did well during the dollar rally. 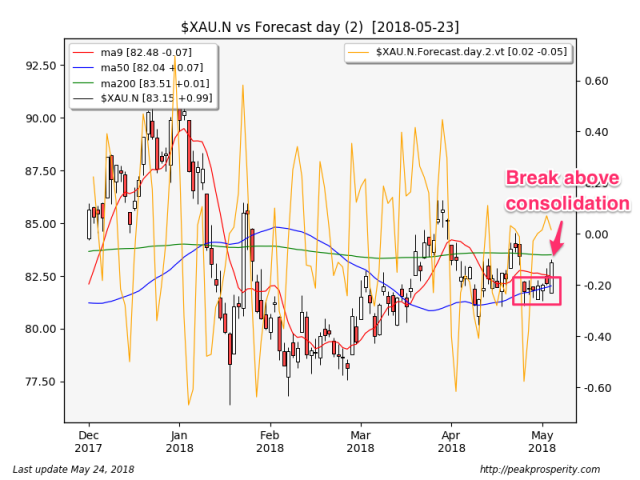 Platinum fell -0.45%, palladium dropped -1.12%, and copped plunged -1.67%. It looks as though the industrial metals are suffering more than gold – that feels like a flight to safety to me.

The dollar rallied +0.38 [+0.41%] to 93.60, making a new closing high, almost entirely because of the plunge in the Euro. Today’s currency moves seemed to be mostly about the new Italian government, although it could also be about the less-than-happy noises coming out of North Korea. The whole “Libyan Model” remark might have been the wrong thing to say.  Forecaster moved up +0.02 to +0.22.

TLT shot higher, up +0.73%. TY confirmed, up +0.45%, with TY forecaster shooting up +0.48 to +0.37, which is a buy signal for TY. Volume was very heavy. The 10-year treasury closed at 3.00%. No doubt the bond shorts were dismayed by the move. I covered my bond short 3 days ago after the swing low. Bonds could move substantially higher if the situation in Europe grows worse.

JNK moved up +0.06%, which is basically no change. JNK has been chopping sideways now for several weeks. Forecaster says its in an uptrend, but to me it appears to be bouncing around the bottom.

Today was a classic flight to safety move; we can see this in gold’s rally (along with drops in silver, copper, platinum, and palladium), the dollar’s rally, as well as the rally in the long bond. These are all safe haven assets. Money fled Europe for the US and Japan. I was wondering if the new Italian government would result in a rally for gold; its nice to see gold respond – even though its mostly just gold in Euros that is catching a bid.

Now we get to see what the new Italian government actually does.

We have to remember, too: right now “times are good.”  What do you think will happen when the economy starts to actually turn down?  If you like “populism” now, you’ll love “populism” that appears as a result of the next downturn.