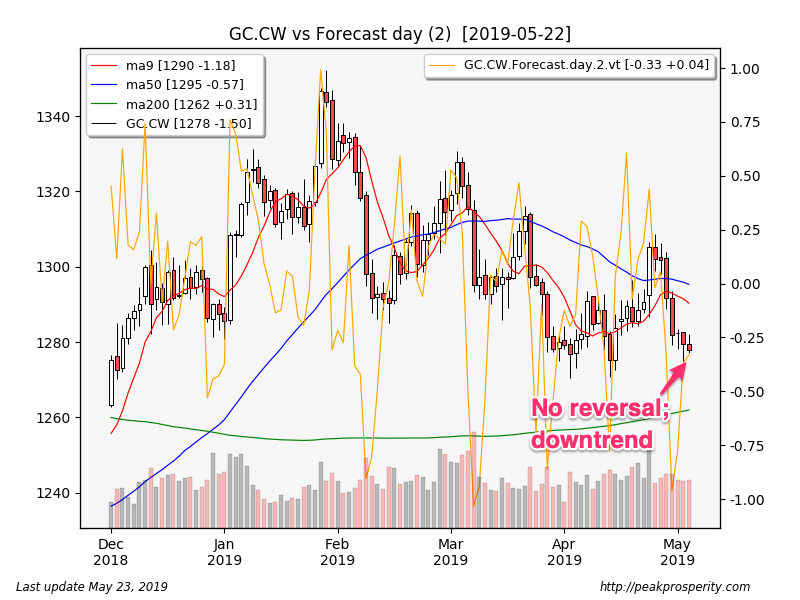 Silver looked a lot like gold – chopping sideways in a narrow range. The doji candle was unrated, but forecaster rose, moving into a slight uptrend. Silver remains in a downtrend in the weekly and monthly timeframes. Is this a reversal for silver? I’m not so sure.  Perhaps silver has just stopped dropping.  Then again, copper was hit pretty hard, so maybe this was actually a pretty good day for silver. 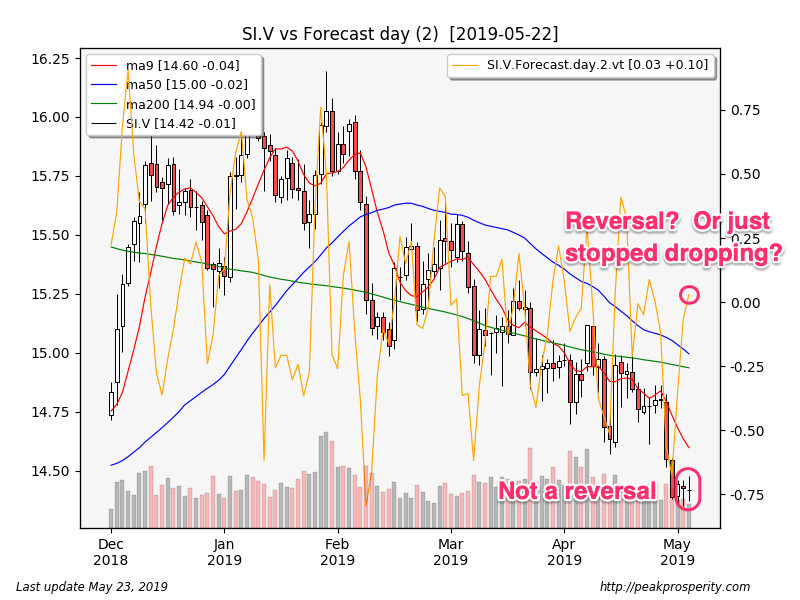 The miners dropped from the open to an hour before the close; GDX fell -1.69% on moderate volume, while GDXJ dropped -2.14% on moderately heavy volume. XAU plunged -1.90%, which was also a new low. The opening black marubozu was a bearish continuation, and forecaster dropped deeper into a downtrend. XAU remains in a downtrend in both daily and weekly timeframes. Miners looked terrible today. 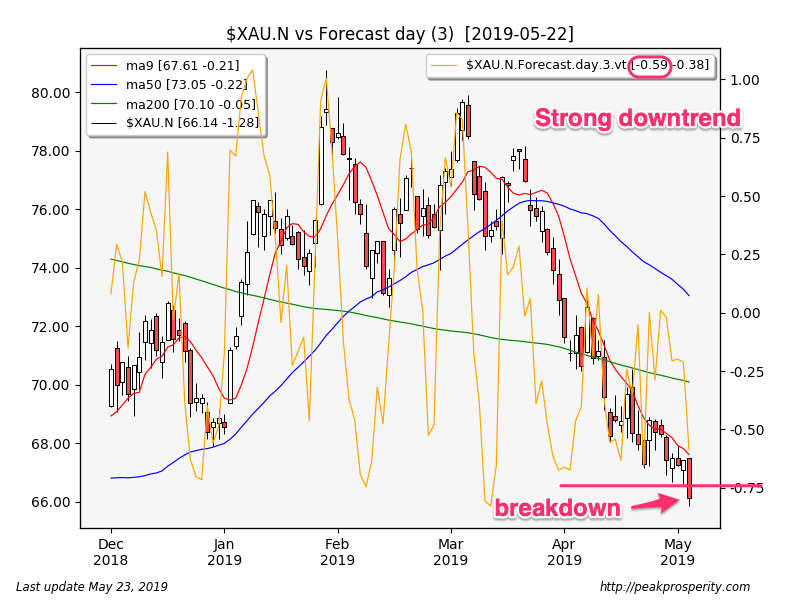 Platinum dropped -1.49%, palladium fell -0.40%, and copper moved down -1.34%. That’s new lows for both copper and platinum. Both metals are looking quite weak – but platinum looks the worst. Copper’s plunge is probably about China. Interestingly, China’s stock market has just chopped sideways since the bad news came out about the trade deal; any bets they are supporting the market over there?  Probably more than we are.

The buck fell -0.02 [-0.02%] to 97.47. The doji candle was unrated, and forecaster inched lower but remains in an uptrend. The buck remains in an uptrend in all 3 timeframes. Really nothing happened in the currency markets today – well, there was a new low in GBP [-0.30%], but it wasn’t all that dramatic.

Crude plunged -1.64 [-2.60%] to 61.38. The market didn’t like the EIA report (crude: +4.7m, gasoline: +3.7m, distillates: +0.8m) and plunged about $1.30 following the release. The confirmed bearish NR7 was definitely bearish (47%), and forecaster plunged deeper into its downtrend. The move took crude through both the 9 and 50 MA lines. Crude remains in a downtrend in the daily and weekly timeframes – the downtrends became significantly more pronounced today. 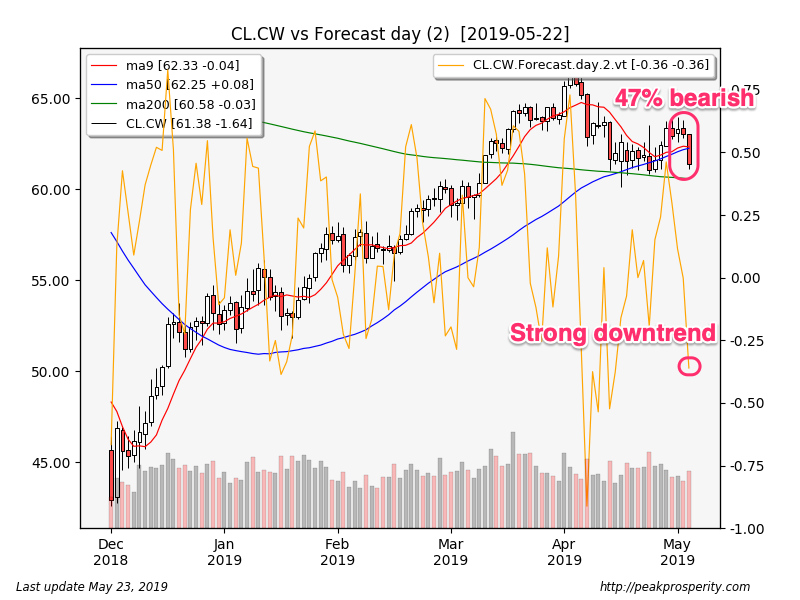 SPX fell -8.09 [-0.28%] to 2856.27. The doji candle was unrated, and forecaster fell substantially, but SPX remains in a slight uptrend. SPX remains in an uptrend in the daily and monthly timeframes, but the daily could be ready to tip over.

TLT jumped +0.57%, the confirmed bullish spinning top was definitely bullish (50%), and forecaster jumped higher into an uptrend. TLT is nearing a breakout.  TY also did quite well, up +0.31%, its swing low was very bullish (67%), and forecaster moved higher pushing TY back into a slight uptrend. TY is in an uptrend in all 3 timeframes. The 10-year yield fell -3.3 bp to 2.39%.  Traders continue to buy the dip in bonds.

JNK rose +0.08%, making a new high and contradicting the modest risk-off mood. JNK remains in an uptrend. BAA.AAA differential is inching higher – and is right on the edge of reversing back into an uptrend. That suggests the credit market may be about to start moving into risk off.

Copper and platinum look pretty awful right now – platinum may be connected to “carmaggedon” (as Wolf Richter likes to call it), while copper is predicting bad news out of China’s economy.  If a 25% tariff regime gives the US a cold, China will catch pneumonia.  That’s always the fate of a manufacturing nation in a downturn.  The US suffered worst during the Depression for exactly that reason.  If you think the US stock market is levitating – look at the SSEC.  “25% tariffs declared on most of China’s exports to the US” -> no reaction from SSEC.  It should be interesting to see what happens once they stop supporting price.

The fact that gold and silver are staying afloat even with the plunge in the industrial metals is reasonably good news.  The miners – they are not looking great.  Today’s new low suggests they probably have further to fall.